‘Miaoli No. 1’ Mulberry: A New Cultivar for Berry Production

‘Miaoli No. 1’ mulberry (Morus atropurpurea Roxb., a synonym of Morus alba L.) has recently been released by the Miaoli District Agricultural Research and Extension Station (MDARES) in Miaoli, Taiwan. ‘Miaoli No. 1’ is a promising cultivar that produces a high yield of large fruit suitable for both processing and fresh markets. ‘Miaoli No. 1’ is named for the first commercial release of mulberry cultivars specifically for berry production from MDARES.

‘Miaoli No. 1’ mulberry (Morus atropurpurea Roxb., a synonym of Morus alba L.) has recently been released by the Miaoli District Agricultural Research and Extension Station (MDARES) in Miaoli, Taiwan. ‘Miaoli No. 1’ is a promising cultivar that produces a high yield of large fruit suitable for both processing and fresh markets. ‘Miaoli No. 1’ is named for the first commercial release of mulberry cultivars specifically for berry production from MDARES.

‘Miaoli No. 1’ (Morus atropurpurea Roxb., a synonym of Morus alba L.) (Porcher, 1995), tested as ‘72C002’, belongs to the Guangdong mulberry group (Minamizawa, 1976; Zhao et al., 2007) and was formerly a local genotype discovered in 1983 on Dahu in Miaoli, central Taiwan (Chang, 2006a). It was incorporated into the mulberry germplasm because of its large fruit and abundant yield and was introduced into the fruiting mulberry breeding program in MDARES, the single research institute located in Miaoli (lat. 24°N), Taiwan, that is devoted to the study of mulberry for tree breeding, physiology, and cultivation. The new mulberry cultivar, ‘Miaoli No. 1’, has been patented and introduced as a fruit crop through the first commercial release of mulberry cultivars in MDARES.

Performance data for ‘Miaoli No. 1’ and a comparable genotype, ‘46C019’ (Morus atropururea Roxb.), which was found in northern Taiwan in 1957 and currently is the most widely planted genotype with medium-sized and medium sweetness fruit and abundant yield (Chang, 2006a), were obtained from an orchard established in 1997 at MDARES. The plantings were evaluated over 3 years (2004 to 2006).

‘Miaoli No. 1’ is a vigorous, deciduous, and monoecious cultivar that produces high crop load. Fruit size and fruit sugar content of ‘Miaoli No. 1’ were higher than those of ‘46C019’ (Tables 1 and 2). Shoot growth after postharvest pruning after spring can reach 1.5 m in length by winter dormancy (Chang et al., 2005). Dormancy occurs between mid-November and late January with budbreak in late January.

Phenology and characteristics of ‘Miaoli No.1’ and a comparable mulberry genotype tested at MDARES (2004 to 2006).

Fruit yield and characteristics of ‘Miaoli No. 1’ and a comparable mulberry genotype tested at MDARES (2004 to 2006).

‘Miaoli No. 1’ produces only pistillate flowers and are cross-fertilized with two pollenizer cultivars, ‘Taisang No. 1 (Morus acidosa Griff)’ and ‘Taisang No. 3 (Morus alba L.)’, which were released for foliage production from MDARES in the 1980s and produce only staminate flowers (Lin and Lu, 2001). In MDARES, ‘Miaoli No. 1’ blooms range between late January and mid-February.

The fruit start developing from early to mid-February and can be harvested from late March to mid-April. The fruit are ovate in shape (Fig. 1) with an average weight of ≈5.5 g, which are ≈38% heavier than those of ‘46C019’. Ripe fruit have an attractive bright purple appearance and a moderate titratable acidity (1.0%). The soluble solids of ‘Miaoli No. 1’ fruit at harvest can reach 7.0% Brix, an average ≈52% greater than those of ‘46C019’. Yields of both cultivars in this trail were averaged at 24.8 to 26.3 kg per plant. With the improved fruit quality and comparable yield, ‘Miaoli No. 1’ is an exciting candidate for mulberry growers looking for new cultivars to replace ‘46C019’ and to exploit the economic potential of mulberry production in Taiwan.

‘Miaoli No. 1’ can be easily propagated through air layering or cuttings from 1-year-old woods taken between May and July. Liners are usually transplanted once in the following spring and remained in the containers for 1 more year before being planted in the field.

‘Miaoli No. 1’ has been reported to be resistant or tolerant to many diseases and pests (Chang, 2006a) with the exception of moderate susceptibility to fruit popcorn disease [Ciboria shirana (P. Henn.) Whetzel] in the rainy season and mulberry beetle (Apriona germari Hope.) during the spring to summer season (Table 1). Once infected by popcorn disease, the fruit swells to resemble popped corn, gradually becoming white and rotten (Lee, 2004). The larvae of mulberry beetles attack the xylem of the trunk, whereas the adults attack the bark of branches.

Climate Information and Areas of Adaptation

‘Miaoli No. 1’ needs full sunlight, an ideal temperature between 23 and 27 °C, and an annual rainfall of 600 to 1200 mm (preferably evenly distributed between postharvest pruning and fall) for maximum vegetative growth and fruit quality. ‘Miaoli No. 1’ is especially recommended for southern Taiwan and other subtropical regions with similar climate for year-round production, where the spring fruiting season is sunny and dry.

Mulberry is a newly emerging fruit crop in Taiwan (Chang, 2006b). The ‘Miaoli No. 1’ mulberry is characterized as a multipurpose cultivar suitable for processing and fresh markets as well as U-pick farms. It is high-yielding and produces better quality fruit, which is attractive and desirable as a raw material for juice, jam, and liquors. Furthermore, it might have the potential to be used in natural dyes, the cosmetic industry, and the medicinal market (Ercisli and Orhan, 2007). In addition to berry production, ‘Miaoli No. 1’, especially given the vigor of the tree, can also produce leaves for silkworms under extreme supply shortage of leaves from foliage cultivars. The ‘Miaoli No. 1’ cultivar has been suggested to be considered as a replacement for ‘46C019’ in Taiwan.

Taiwan Plant Breeder's Right has been granted (Certificate No. A00532 by Council of Agriculture, Executive Yuan, Taiwan, Republic of China) and a multiplication license for nurseries is pending. A limited quantity of liners may be available for research purposes only by sending a request to the author (jerchia@mdais.gov.tw). 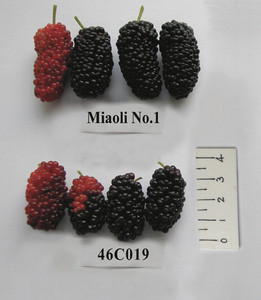