The Flavr Savr Tomato, an Early Example of RNAi Technology

Search for other papers by Rick A. Sanders in
ASHS
Google Scholar
PubMedClose

The Flavr Savr tomato has increased storage life through suppression of the tomato polygalacturonase (PG) gene, resulting from transformation of an antisense expression cassette of the PG cDNA (pCGN1436) (Sheehy et al., 1988). Efficacious but noncommercial pCGN1436 transformation events contain multiple T-DNA insertions linked by right borders (Redenbaugh et al., 1992; Sanders and Hiatt, 2005), leading to the hypothesis that readthrough transcription of the PG-linked antisense (PGAS) cassettes resulted in RNA interference (RNAi)-mediated PG suppression, rather than antisense-mediated sequestration, of the endogenous PG transcript (Watson et al., 2005). To test this hypothesis, we determined if RNAi suppression is responsible for the Flavr Savr phenotype by characterizing the T-DNA locus of the Flavr Savr tomato event and analyzing for the presence of 21-nt PG small interfering RNAs (siRNAs) diagnostic of RNAi.

CF5013 is the tomato cultivar that resulted from a nonconventional cross between the homozygous PGAS inbred line CR3-1436-613:@.12 with the tomato hybrid Mountain Spring. CF5013 is heterozygous for the PGAS gene which is dominant and was sold commercially as the Flavr Savr tomato. These plants were selfed, and resulting sibling plants were screened by taqman PCR for NptII. Of the 64 plants screened, the ratio was 43 to 21 NptII positive to negative plants, which is consistent with a 3:1 ratio of transgenic to non-transgenic tomato plants (χ2 P = 0.15).

Genomic DNA was isolated from tomato leaves, and EcoRV Southern blots were done according to Redenbaugh et al. (1992). To make inverse PCR libraries, 10 μg of genomic DNA was digested separately with XhoI, NcoI, EcoRV, HindIII, and PstI and ligated to itself. Primers complementary to regions of the T-DNA were used to walk out across the T-DNA inserts as well as into genomic flanking regions. PCRs were done with Extaq (Takara Bio, Shiga, Japan), and products were cloned and sequenced using pCR2.1-TOPO (Invitrogen Corp., Carlsbad, CA).

Oligos were isotopically labeled with [γ-32P]ATP as described in Allen et al. (2005). DNA probes: Probe C—First 483 bp of the NptII sequence. Probe D—Last 420 bp of the PG sequence. DNA probes were labeled with dCTP using the RadPrime DNA-labeling system (catalog no. 18428-011, Invitrogen) according to the manufacturer's directions.

Plants from commercial hybrid seed (CR3-1436-613:@.12/CF5013), not included in the previous analysis (Sanders and Hiatt, 2005), were grown and selfed to obtain positive (4523, 3951, 3949) and null (4193, 4131, 3975) sibling plants for molecular analysis. Genomic DNA from these plants was digested with EcoRV, and Southern blot hybridization was performed to determine T-DNA copy number and linkage (Fig. 1A). Bands were observed in the transgenic plants of 3698- and 5162-bp corresponding to the PG region of the locus, in addition to a 2-kb band of the native PG gene present in all lanes. This is consistent with the presence of two copies of the PG region of the T-DNA. The transgene locus and flanking genomic sequence were obtained by inverse PCR amplification, cloning, and sequence analysis of resulting fragments. The locus sequence confirmed the T-DNA linkage at the left border (LB) of one of the two T-DNAs; the second T-DNA is truncated, removing all of the LB sequences and part of the MAS promoter (Fig. 1B). These results were further confirmed by amplifying the T-DNAs with flanking genomic and unique junction region primers (Fig. 1C) in transgenic (4523) and null (4193) siblings. The 6974-bp band (lane 1) contains the truncated (left) T-DNA. The 7725-bp band (lane 3) contains the full-length (right) T-DNA. We were unable to amplify across the insert (14,674-bp, lane 5), likely due to the inverted repeat sequence. In the null sibling, these primers amplify a 1058-bp band (lane 6) verifying insert location. The 764-bp band (lane 7) is the product across the unique T-DNA junction sequence. Taken together, these results show the commercial Flavr Savr tomato contained two T-DNAs linked in an inverted orientation.

To investigate if PG silencing is the result of an RNAi-mediated pathway, we confirmed the phenotype of the Flavr Savr tomato by PG enzyme activity assays (Redenbaugh et al., 1992) and assessed accumulation of PG mRNA and siRNAs. PG enzyme activity assays on ripe tomatoes using a polygalacturonic acid substrate (Redenbaugh et al., 1992) showed relative activity of 0.069 ± 0.009 (sd) in transgenic vs. 1.041 ± 0.065 (sd) in null siblings. A 10-fold reduction in PG activity is consistent with previously described pCGN1436 transgenic tomato events (Redenbaugh et al., 1992). RNA from ripe tomatoes was separated on high and low molecular weight blots and probed for PG mRNA and siRNAs. Accumulation of PG mRNA was reduced ≈20-fold in transgenic sibling tomatoes relative to nulls (Fig. 2A). Sense and antisense PG siRNAs were detected, consistent with an RNAi suppression mechanism (Fig. 2B). We also detected siRNAs from the coding region of the NptII cassette of the T-DNA. In contrast, we were unable to detect siRNAs from noncoding regions of the T-DNA or flanking genomic sequences (data not shown). A weak 1.5-kb band corresponding to the correct size of NptII mRNA was detected by Northern blot (Fig. 2A) after a 3-d exposure. The long exposure and weakness of the bands indicate that the level of NptII mRNA was low, consistent with the presences of siRNAs. The majority of the siRNAs from the coding regions belong to the 21-nt size class, although lower abundant 24-nt siRNAs were also observed. The decrease in PG message correlates with the reduction in PG enzyme activity levels, and the presence of 21-nt siRNAs correlates with the decrease in PG message.

PG gene suppression is the result of RNAi-mediated pathways.

We found transgenic siblings of the commercial Flavr Savr tomato event contain two linked T-DNAs; however, unlike the eight right-border linkage events described by Sanders and Hiatt (2005), these plants contain T-DNAs linked at the left borders. While this configuration results in inverted PG repeats, the promoter orientation would not be expected to generate a dsRNA precursor. Previous reports show using a single copy of an antisense transgene can trigger RNAi (Fagard and Vaucheret, 2000; Stam et al., 1997, 2000; Watson et al., 2005), and there are cases where cassettes lacking promoters induce gene silencing in plants with T-DNAs linked the same way we show here (Fagard and Vaucheret, 2000; Stam et al., 1997, 2000; Watson et al., 2005). Despite the unexpected difference in T-DNA linkage orientation, we observed an abundance of 21-nt siRNAs associated with sequence-specific mRNA degradation and translational repression (Brodersen and Voinnet, 2006; Fagard and Vaucheret, 2000; Hamilton et al., 2002; Watson et al., 2005). The 24-nt class, associated with transcriptional repression (Brodersen and Voinnet, 2006; Fagard and Vaucheret, 2000; Hamilton et al., 2002; Watson et al., 2005), was less abundant and some PG mRNA was still detectable in Flavr Savr tomatoes. If suppression of PG activity was due to sequestration from translation by binding to antisense RNA (Metzlaff et al., 1997), the accumulation of sense PG transcript should be unaffected and antisense transcripts would be detected. In contrast, if suppression were due to transcriptional or post-transcriptional gene silencing, accumulation of the message would be reduced, suggesting transgene-associated suppression was not due to repression of endogenous PG mRNA transcription but to RNAi (Brodersen and Voinnet, 2006). It is interesting that siRNAs were detected for PGAS and NptII, but not for any other regions of the T-DNA. This suggests that suppression requires transcription from the associated PG and NptII promoters. Using flanking sequence as a query in searches with BLAST, we identified a region 1197-bp downstream of the T-DNA insert containing a putative cytochrome P450 gene (Fig. 1B). Potential promoter or enhancer elements associated with this gene may be associated with transcription across the T-DNA locus and could be responsible for contributing to the initial production of a dsRNA for the coding regions, thus resulting in the production of the siRNAs. This would also explain why we could not detect siRNAs from noncoding regions of the T-DNAs. The previously analyzed events have the potential to form PG dsRNA directly, in an RNA-dependent RNA polymerase (RdRP)-independent mechanism via readthrough transcription from one PG cassette in one T-DNA into the other PG cassette in the other T-DNA (Sanders and Hiatt, 2005). It has been shown that there are several overlapping, and potentially hierarchical, mechanisms and pathways involved in plant gene silencing (Deleris et al., 2006). Without direct evidence of transcription across the transgene, we hypothesize an RdRP-dependent mechanism may be a contributor to enhancing siRNA production and gene silencing (Wassenegger and Krczal, 2006) compared with a dsRNA formed directly via readthrough transcription. It has been demonstrated repeatedly that expression of an antisense cDNA alone does not result in gene silencing as efficiently as expressing a dsRNA (Stam et al., 1997, 2000; Watson et al., 2005). Thus, the silencing mechanism of the Flavr Savr events first reported by Sanders and Hiatt (2005) might not be the only mechanism responsible for silencing in the commercial Flavr Savr tomato, event (CR3-1436-613:@.12/CF5013). PG gene suppression was achieved using an antisense expression cassette of the endogenous (PG) gene resulting in an RNAi-mediated pathway and yielding the phenotype of the Flavr Savr tomato. This research supports the need for precise characterization of gene insertion structures in relationship to understanding the mechanisms of gene suppression.

Characterization of siblings of the Flavr Savr tomato. (A) Southern blot confirmation of T-DNA number using probe D of the PG gene. Transgenic (4523, 3951, and 3949) and non-transgenic (4193, 4131, and 3975) siblings were analyzed. The T-DNA insertion corresponds to the 3.6- and 5.1-kb hybridizing bands. (B) Diagram of the sequenced 13,621-bp T-DNA insertion and flanking genomic regions. DNA probes (bars C and D) and primers (arrows 1–6) used for confirmation PCRs are indicated. A putative CYP82 family cytochrome P450 mono-oxygenase gene in the adjacent genomic sequence is indicated (gray box). (C) Confirmation of linked T-DNA orientation by PCR with genomic flank and unique junction sequence primers. PCRs are shown in pairs; odd-numbered lanes use transgenic sibling 4523 genomic DNA, even-numbered lanes use null sibling 4193 genomic DNA. Sizes of the marker bands (lane L) are indicated at right. Left T-DNA, lanes 1 and 2 (primers 1 and 4); right T-DNA, lanes 3 and 4 (primers 2 and 3); full insert, lanes 5 and 6 (primers 1 and 2); unique junction region, lanes 7 and 8 (primers 5 and 6). 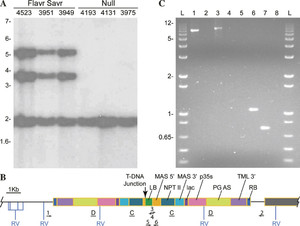 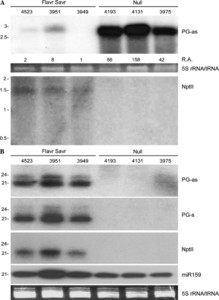