The genus Callicarpa L. (Verbenaceae J. St-Hil.) consists of ≈140 species found mainly in tropical and subtropical Asia, but with a few members native to tropical America and Africa and temperate Asia and North America (Chen and Gilbert, 1994). Commonly known as beautyberries, several species of Callicarpa are cultivated as garden plants. They are grown primarily for their ornamental fruits (drupes), which are typically violet to purple in color, ripen in early autumn, and persist for a short time after leaf drop (Dirr, 1998). Although they generally lack ornamental appeal when ripe fruit are absent, beautyberries are easy to grow and do not suffer from any major disease or insect problems.

Callicarpa dichotoma (Lour.) K. Koch, purple beautyberry, is often considered one of the best species for American gardens (Dirr, 1998). It is less coarse in appearance and has greater cold hardiness than American (C. americana L.) or Japanese (C. japonica Thunb.) beautyberry. Although the wild-type C. dichotoma has purple fruit, a white-fruited cultivar (C. dichotoma ‘Albifructus’) is available in the trade. Reported here is a sport of C. dichotoma ‘Albifructus’ with variegated foliage, a new trait that adds summer interest to this deciduous shrub.

A variegated sport of C. dichotoma, ‘Albifructus’ was discovered at Tennessee Technological University in 2000 by G. Bachman and E. Davis. It was transferred to S. Reed at the U.S. National Arboretum worksite in McMinnville, Tennessee, in 2002 for testing of its commercial value. In 2003, plants were sent for evaluation to nursery and university cooperators in Alabama, Arkansas, Connecticut, Florida, Georgia, Illinois, Indiana, Kentucky, Maryland, Massachusetts, Missouri, New Jersey, North Carolina, Ohio, Oklahoma, Oregon, Pennsylvania, South Carolina, Tennessee, Texas, Virginia, and Washington. ‘Duet’ was released jointly by the U.S. National Arboretum and Tennessee Technological University in 2006 after evaluation in these locations.

The cultivar name ‘Duet’ was registered in 2007 with the International Cultivar Registration Authority for unassigned genera (Steven Clements, Brooklyn Botanical Garden, Brooklyn, NY) in accordance with the International Code of Nomenclature for Cultivated Plants (Brickell et al., 2004). Herbarium-type vouchers of ‘Duet’ have been deposited at the U.S. National Arboretum Herbarium.

Callicarpa dichotoma ‘Duet’ (National Arboretum No. NA72235; Plant Introduction No. PI651521) is a deciduous, rounded multistemmed shrub that reached 2 m high and 2 m wide in 5 years of growth in McMinnville, Tennessee (USDA Hardiness Zone 6b; USDA, 1990; Fig. 1). Mature leaves (Fig. 2) are elliptic, up to 7.2 cm long by 2.8 cm wide; apex acute, base cuneate; leaf margin serrulate from one-third above the base to the apex. The adaxial leaf surface is green [Royal Horticultural Society (RHS) 137 A-B; Royal Horticultural Society, 1986] with irregular yellow margins (RHS 11 A). Although an occasional green shoot has been observed, the variegation is very stable, and ‘Duet’ is highly unlikely to revert to a nonvariegated or a mixed variegated/green plant. Flowering occurs in midsummer, but flowers are inconspicuous and not of ornamental value. Flowers are followed by clusters of 10 to 12 white (RHS 155A) drupes (Fig. 2). Individual drupes are up to 3 mm in diameter, ripen in September, and persist for 1 to 2 weeks after leaf drop.

‘Duet’ is well suited for use as a single specimen plant, in a mixed shrub border, as a deciduous hedge, or for mass planting in large areas. The primary ornamental trait is the variegated foliage, which is particularly attractive when planted near plants with dark green leaves. ‘Duet’ grows well in average soil of moderate fertility. It can be grown in full sun in zone 7 and cooler climates without the yellow margins of the leaves burning, but may benefit from light shade in warmer climates. Leaves on plants become sparse if planted in areas with heavy shade. Like other Callicarpa, ‘Duet’ is free of major disease and insect problems. ‘Duet’ is recommended for USDA Zones 5 through 8. Although some winter dieback may occur in zone 5 or after late spring freezes, plants will quickly regrow if cut back to the ground. ‘Duet’ is readily propagated from softwood cuttings using 4000 ppm KIBA, with rooting occurring within 4 weeks.

‘Duet’ plants are available from wholesale, mail-order, and a limited number of retail nurseries (source list available on request). The U.S. National Arboretum does not have plants of this cultivar available for general distribution, but can supply cuttings to nurseries wishing to initate production. 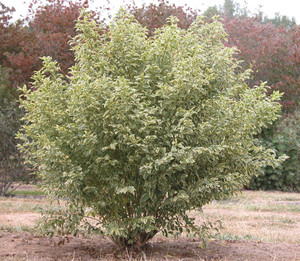 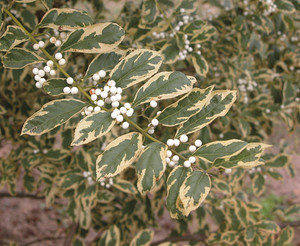