Search for other papers by Mark A. Bennett in
ASHS
Google Scholar
PubMedClose

Septoria leaf spot (Septoria lycopersici Speg.) is an important soilborne fungal disease of fresh market and processing tomatoes in midwestern states (i.e., Ohio and Indiana) and other tomato-producing areas. Septoria leaf spot overwinters on infected tomato debris and other solanaceous weed hosts such as horsenettle between crops (Jones et al., 1991). Tomato plants become infected during the production season when infested soil-carrying inoculum (spores) is splashed onto lower leaves during rainfall and overhead irrigation. Periods of high relativity, high temperatures, and leaf wetness favor the development of septoria leaf spot during the production season (Jones et al., 1991) and if not managed properly, defoliation of tomato plants can be as high as 100%. Because of the threat of diseases such as septoria leaf spot, fungicides are applied to nearly 100% of the processing tomato crops grown in the Midwest (Precheur et al., 1992). If necessary, tomato growers control septoria leaf spot with weekly protectant fungicide applications during the production season.

Cover crops left on the soil surface during the production season can act as a physical barrier that reduces soil splashing from rainfall and overhead irrigation. Artificial inoculation of tomato plants confirmed that soil splashing from precipitation is the primary means for spore dissemination and an important factor contributing to the development of septoria leaf spot epidemics in tomatoes (Parker et al., 1995). Rainfall and overhead irrigation act to initiate primary infections early in the growing season by splashing contaminated soil into the plant canopy. Soil particles can help spread fungal pathogens such as Septoria lycopersici, which overwinter in plant debris buried in the soil. Few studies have examined the effects of cover crop mulches on soilborne fungal disease in processing tomato production. Growing commercial processing tomato cultivars Ohio 7870 and Heinz 8704 in a zone-tilled mulch consisting of rye did not affect marketable yield or percent fruit with mold (early blight caused by Alternaria solani, anthracnose fruit rot caused by Colletotrichum coccodes, and soil rot caused by Rhizoctonia solani). The zone-tilled mulch system also had no effect on defoliation caused by early blight (Louws et al., 1996).

The objective of this study was to evaluate the effects of a chemically or mechanically killed winter rye and hairy vetch cover crop mulch on septoria leaf spot development in processing tomato production.

Location and design of field experiments.

To ensure high inoculum levels of S. lycopersici, both fields used in the study had been in continuous tomato production for at least 3 years. Field preparation in the Fall 1996 and 1997 included disking, moldboard plowing, and new bed formation. Before disking fields in Fall 1996 and 1997, fertilizer (0N–46P–0K and 0N–0P–61K at 55 kg·ha−1 each) was broadcast onto the soil surface.

In 1997 and 1998, weekly visual disease ratings were performed in all treatments to determine the severity of septoria leaf spot. A 1.5-m section in the center of each subplot treatment row was visually rated using a scale of 0.0 to 1.0 (0.05 increments) based on the percent defoliation (0.0 = no disease and 1.0 = 100% defoliation) caused by septoria leaf spot. In both years, care was taken to distinguish between defoliation caused by septoria leaf spot and that caused by other pathogens such as bacterial canker, Clavibacter michiganense subsp. michiganense (Smith), or weather damage such as hail or wind. In both years, the weekly severity ratings were used to develop disease progress curves and arsine transformed area under disease progress curve (AUDPC) values were calculated for all subplot treatments.

Harvest dates were 30 Aug. and 11 Sept. 1997 and 31 Aug. and 10 Sept. 1998 for no spray and weekly fungicide programs, respectively. All fruit from two 1.5-m long row sections from the center of each subplot were harvested to determine marketable yield (weight in kilograms per plot), which included all marketable (i.e., not diseased) red, green, and pink fruit.

In both years, a winter rye/hairy vetch cover crop mulch was successfully established in the fall and killed by herbicide application or undercutting the following spring before processing tomato transplanting. A rainfall event on 29 Apr. 1998 (on the day of herbicide application and undercutting) resulted in incomplete dessication in the chemically killed and regrowth in the mechanically-killed cover crop bed systems and a second herbicide application and undercutting was done. In both years, chemical kill immediately followed by rolling and mechanical undercutting of the winter rye and hairy vetch cover crop resulted in uniform mulch distribution over bed surfaces. Visually rating percent groundcover of chemically and mechanically killed cover crop mulch plots immediately after chemical or mechanical dessication before tomato transplanting was greater than 90% in each year. At harvest in 1997 and 1998, soil coverage by mulch litter visually estimated from chemically and mechanically killed cover crop plots was 63% to 66% at harvest, respectively (data not shown).

There was no significant interaction between bed system and fungicide treatment; therefore, marketable yields were combined across fungicide treatment subplots in each year (Table 1). In 1997, marketable yields in both mulch systems were significantly higher compared with the conventional (bare soil) bed system (Table 1). Conversely, in 1998, marketable yields were lower in both mulch systems than in the conventional system (Table 1). Yield may or may not increase when organic mulches are incorporated into low-input fresh market and processing tomato production systems (Abdul-Baki and Teasdale, 1993; Creamer et al., 1996; Louws et al., 1996; Price and Baughan, 1987). In a study comparing four processing tomato production systems differing in cover crop and chemical inputs, the conventional system (bare soil) produced a significantly greater yield of red fruit than integrated (cover crop mix with reduced chemical input) or organic systems (cover crop mix with no synthetic chemical input) (Creamer et al., 1996). At another location in the same Ohio study, there were no significant differences in red fruit yield among production systems (Creamer et al., 1996). In the present study, reduced yields in both mulch systems in 1998 were most likely the result of limited rainfall and soil moisture exacerbated by the presence of the cover crop mulch on the soil surface during the production season.

Marketable yield and AUDPC values for no weekly fungicide and weekly fungicide treatments on three different bed systems in 1997 and 1998 at the Ohio State University Waterman Agricultural and Natural Resources Laboratory, Columbus, OH.

In 1997 and 1998, the earliest symptoms of septoria leaf spot were detected ≈1 Aug. and 6 July, respectively, with the initial onset of epidemics starting ≈7 d later in each year (Fig. 1). The septoria leaf spot epidemics that occurred in central Ohio in 1997 and 1998 may have occurred too late in the growing season to have a detrimental effect on marketable yield. In each year, defoliation caused by septoria leaf spot was decreased when a calendar-based (weekly) fungicide program was used to control the pathogen (Table 1). Yield loss resulting from septoria leaf spot has been described as a late-season phenomenon, and the disease did not significantly reduce yields when leaf damage (defoliation) was less than 50% by mid-August (Elmer and Ferrandino, 1995). In Ohio, mid-August is approximately three-fourths into the processing tomato production season.

In both years, percent defoliation caused by septoria leaf spot was highest in each bed system when no fungicide was applied season-long. When no fungicide was applied season-long, percent defoliation was greater than 90% by harvest in 1997 and greater than 50% by harvest in 1998 (Fig. 1). Area under disease progress curves were calculated for each fungicide treatment in 1997 and 1998 with significant interaction detected between main plot (cover crop) and subplot (fungicide treatments) effects (Table 1). In both years, AUDPC values for both no fungicide/mulch systems were significantly lower than the no fungicide/conventional bed system, suggesting that presence of the cover crop alone reduced or delayed septoria leaf spot development (Table 1). In 1997, there were no differences in AUDPC values between bed systems with weekly fungicide applications (Table 1). However, when fungicide was applied weekly in 1998, final AUPDC values were significantly lower in both mulch systems than in the conventional bed system, respectively (Table 1).

Septoria lycopersici conidia are thought to infect older leaves lower in the plant canopy at the onset of an epidemic. The logarithm of the disease severity (lesions per square centimeter of leaf) was linearly correlated with the logarithm of inoculum density (spores per square centimeter of leaf), and older leaves were more susceptible than younger leaves to septoria leaf spot when inoculum densities were high (104 spores per square centimeter of leaf) (Elmer and Ferrandino, 1995). However, no quantitative information was obtained on how leaves of different ages were affected by septoria leaf spot. In the present study, the presence of a killed cover crop mulch may have helped reduce initial inoculum densities from reaching the older leaves closest to the soil surface thus reducing or delaying the development of the septoria leaf spot epidemic in 1997.

In this study, the use of a fall-sown winter rye and hairy vetch cover crop mulch in processing tomato production was evaluated for its influence on the development of septoria leaf spot. The cover crop mulch was either chemically or mechanically killed and left on the soil surface before tomato transplanting to act as a physical barrier to prevent spore dispersal of the soilborne fungal disease, S. lycopersici, through soil splashing. The prevention of soil splashing may be critical for reducing the amount of potential inoculum from reaching the tomato plant canopy and inciting a disease such as septoria leaf spot. In both years of this study, septoria leaf spot was detected on tomato foliage at the same time in bare soil and killed cover crop mulch systems, yet there was a delay in the development of septoria leaf spot in processing tomatoes grown on a fall-sown winter rye and hairy vetch cover crop mulch. Using cover crop mulches such as winter rye or hairy vetch may help reduce initial inoculum levels of soilborne fungal foliar pathogens such as septoria leaf spot from reaching the plant canopy by preventing inoculum dispersal through soil splashing during precipitation events. Surface topography of groundcover and plant canopy were major factors controlling splash dispersal of C. acutatum (anthracnose of strawberry) through effects on splash droplet trajectories and loss of inoculum (Yang et al., 1990). Straw mulch alone provided 95% to 99% control of Phytophthora cactorum, and straw mulch between the rows was equally or more effective than fungicides for controlling leather rot of strawberry (Ellis et al., 1998).

Cover crop mulches desiccated and left intact on the surface to act as a physical barrier may be more important in reducing soilborne fungal diseases that attack fruit such as Phytophthora spp. (Buckeye rot) of tomato or Fusarium fruit rot (Fusarium spp) of pumpkin (Cucurbita pepo), which infect fruit that lay in direct contact with the soil during the production season. 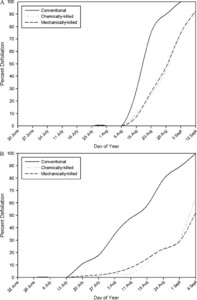