Influence of Growing Area, Year, Season, and Cultivar on the Composition of Myrtle Leaves and Infusions

Myrtle (Myrtus communis L.) is a shrub of the Myrtaceae family. It is a thermophylous species growing spontaneously in the Mediterranean area (Mulas et al., 1998). Since ancient times, this species have been used for medicinal and aromatic purposes because of the essential oil content of its leaves and fruits (Dorman and Deans, 2000; Shadidi Bonjar, 2004; Vanhaelen and Vanhaelen-Fastré, 1980).

The industrial production of myrtle liqueur follows a traditional recipe and technique, and consumers are attracted by the image of genuineness of these drinks. Myrtle liqueur is produced by the hydroalcoholic infusion of berries or leaves and the addition of a sugary solution, without using any antioxidant or conservant. The production of white myrtle liqueur involves a treatment of clarification that prevents its darkening by the oxidation of exceeding phenolic compounds. Fortunately, the beneficial properties of myrtle leaf extracts are not damaged by this treatment (Alamanni and Cossu, 2004; Romani et al., 1999; Rosa et al., 2003; Romani et al., 2004).

Thus far, leaves and fruits used by distilleries have been hand-picked from wild myrtle plants. This practice may alter the ecological equilibrium of natural ecosystems and does not assure quality standards of the raw material supplied to the industry (Mulas et al., 1999).

The content of chlorophyll a and b, tannins, and polyphenols of myrtle leaves and myrtle liqueurs are important attributes. In particular, chlorophylls (a and b) give an attractive pale green color to myrtle liqueur, tannins are responsible for its astringency, and polyphenols are related to a spicy taste and brown color after its oxidation. However, little information is available on the characteristics of leaves of cultivated plants and on the relationship between myrtle leaf composition and liqueur quality.

For this reason, the leaves of five myrtle cultivars growing in two sites of Sardinia were analyzed after spring and winter samplings for chlorophyll, polyphenol, and tannin contents in 2000 and 2001. The hydroalcoholic infusions obtained from their leaves were analyzed for the same compounds and for their color as well.

Each studied cultivar consisted of about 100 bushes planted in a single row at a spacing of 1 m within rows and 3 m between rows. Weeds were mechanically removed and myrtle plants were watered by drip irrigation during the summer.

For each cultivar, three random samples of 200 g of mature leaves were hand picked before bloom (May and June 2000 and 2001) and after berry ripening time (Nov. and Dec. 2000 and 2001) from all plants for a total of about 600 g of leaves per cultivar. Leaves were stored in plastic bags at −22 °C until chemical analysis or infusion in the hydroalcoholic solution. The infusion was performed in laboratory following the industrial process guidelines. A random sample of leaves of each cultivar (20 g) was put separately in a glass jar containing 120 mL of 96% ethanol and 60 mL of deionized water. The infusion was kept in a dark place at room temperature for 3 months.

Leaf phenolic compounds were extracted according to Congiu and Franco (1998). Frozen leaves (10 g) were crushed and mixed in 100 mL of methanol containing 0.1% of HCl for 24 h at 4 °C. After filtration through filter paper, the solution was adjusted to 100 mL with acidified methanol and was stored in dark glass bottles at 4 °C until analysis.

One milliliter of methanolic leaf extract, pure or diluted (usually 1:10, but variable according to the expected polyphenol concentration), was transferred into a flask and 35 mL of deionized water and 2.5 mL of Folin-Ciocalteus reagent (Merck, Withehouse Station, NJ) were added. After 3 min, 5 mL of 20% sodium carbonate solution was added and the solution was shacked quickly. The solution was then heated and kept at 70 °C in a thermostatic bath for 20 min, to allow it to become colored. After a fast refrigeration (about 2 min under water flux), the solution was filtered through a 120-mesh filter paper (Whatman, Brentford, UK) and introduced in optic glass cuvettes. Absorbance at 750 nm wavelength was measured by a Cary 1 E spectrophotometer (Varian, Palo Alto, CA).

Increasing concentrations of a standard of pure (+) catechine (Fluka grade, St. Gallen, Switzerland) were used to calculate the polyphenol content of the leaf extracts and infusions.

Four milliliters of diluted leaf methanolic extract or pure hydroalcoholic infusions was put in a flask. Four milliliters of vanillin reagent (1% vanillin in 70% sulfuric acid) and 2 mL of 96% ethanol were then added to it. After being kept for 20 min in the dark, the absorbance at 500 nm wavelength was measured by spectrophotometry. A reference of 6 mL of 96% ethanol and 4 mL of vanillin was used. Tannin concentration was determined by comparison with a reference of increasing (+) catechine concentrations.

Chlorophyll a and b content in leaf tissues was determined according to the method proposed by Inskeeo and Bloom (1985). Twenty disks of 1-cm diameter were removed from the leaves, weighed, and put in hermetically closed flasks containing 10 mL of 80% acetone. After 48 h of incubation in the dark at 4 °C, samples were homogenized by a Diax 600 omnimixer (Heidolph, Kelheim-Donau, Germany) and subsequently filtered. Hydroalcoholic infusions were diluted at 1:10 using 80% acetone.

Absorbance was measured at 664.5 and 647.0 nm wavelengths for chlorophyll a and b, respectively, using a Cary 1 E spectrophotometer (Varian).

The Commission Internationale de l'Eclairage (1976) L*, a*, and b* color coordinate values of the hydroalcoholic infusions were measured. L* is the brightness of the color (the smallest L* yields black), a* is the red/green hue component (+a* is red, −a* is green), and b* is the blue/yellow hue component (+b* is yellow, −b* is blue).

Two milliliters of infusion was put into a quartz cuvette and its chromatic values were measured by a Cary 1 E spectrophotometer (Varian), within the range of 780 to 380 nm at 5-nm intervals.

All data were the average of three replications. Data were tested by analysis of variance with year, growing area, season, and cultivar as factors. Mean separation was performed by Duncan's multiple range test at P ≤ 0.01, using MSTAT-C (Michigan State University, East Lansing, 1991) software.

Mean temperatures were relatively similar in the two locations.

Chlorophyll a and b content in myrtle leaves from cultivated plants. Each value is the mean of three replications. Mean separation was performed by Duncan's multiple range test. Data labeled with the same letter are not significantly different at P ≤ 0.01. 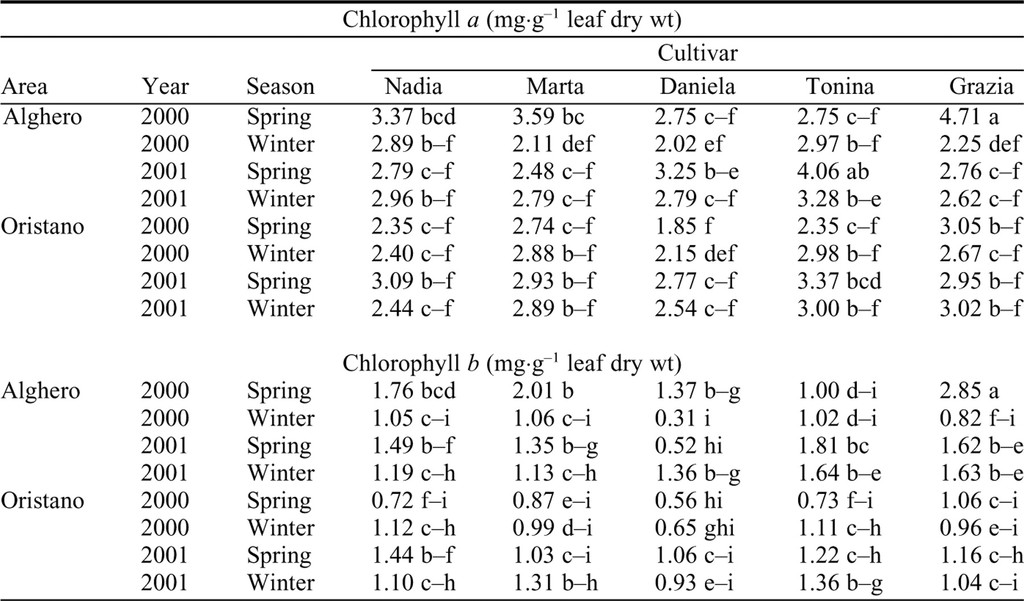 Chlorophyll a and b content in infusions of myrtle leaves from cultivated plants. Each value is the mean of three replications. Mean separation was performed by Duncan's multiple range test. Data labeled with the same letter are not significantly different at P ≤ 0.01. 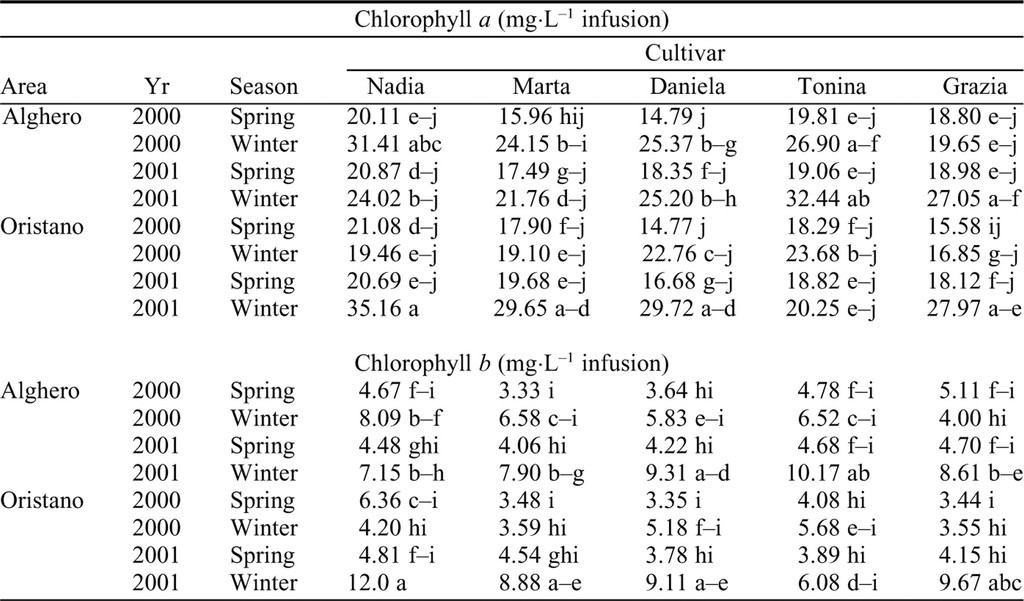 Tannins and polyphenols content in myrtle leaves from cultivated plants. Each value is the mean of three replications. Mean separation was performed by Duncan's multiple range test. Data labeled with the same letter are not significantly different at P ≤ 0.01. 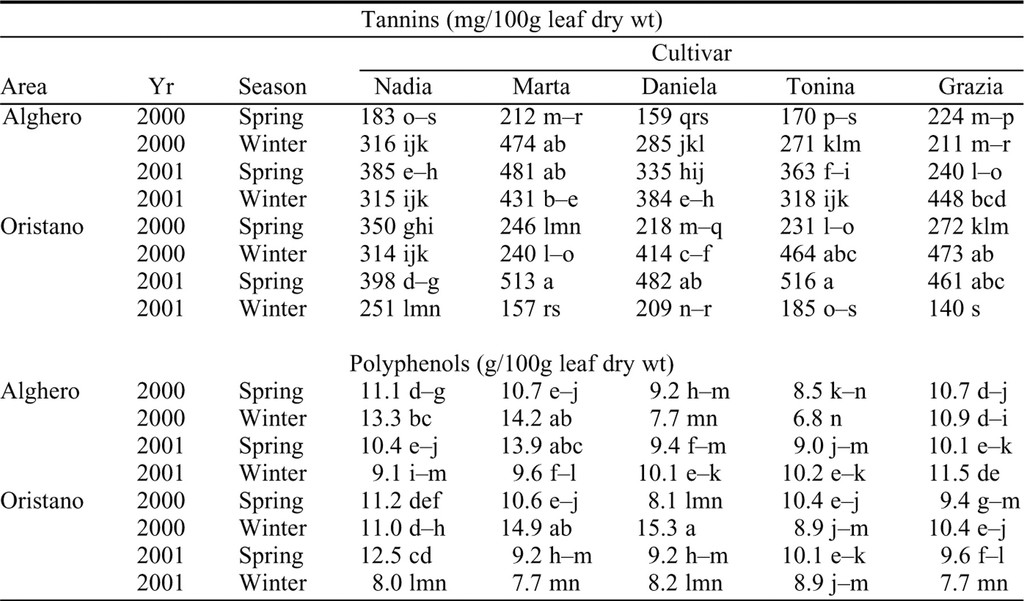 Tannins and polyphenols content in infusions of myrtle leaves from cultivated plants. Each value is the mean of three replications. Mean separation was performed by Duncan's multiple range test. Data labeled with the same letter are not significantly different at P ≤ 0.01. 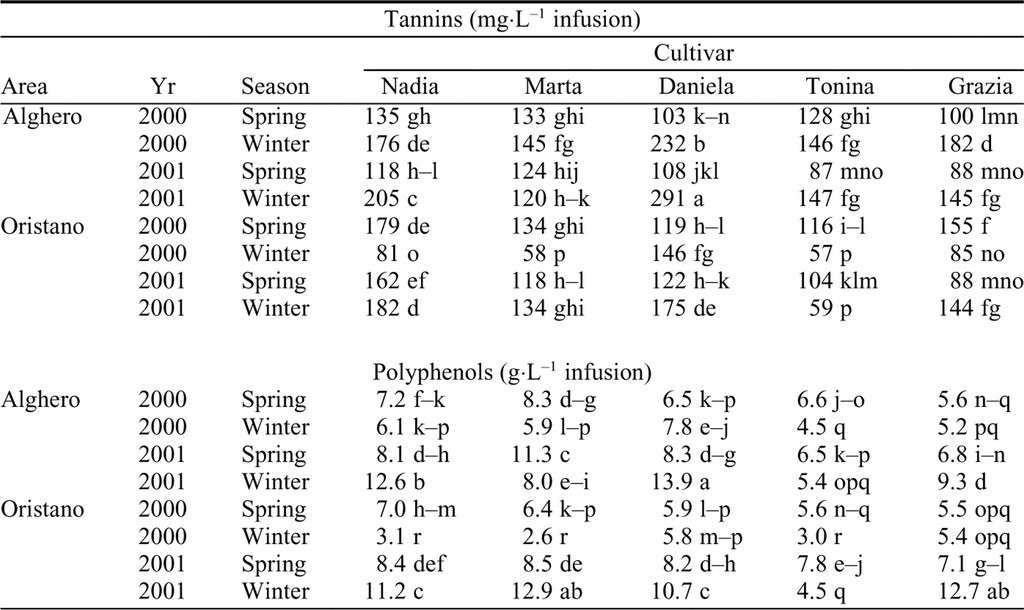 Color evaluation in myrtle hydroalcoholic infuses by CIELAB chromatic scale. Each value is the mean of 15 replications. Mean separation was performed by Duncan's multiple range test. Data labeled with the same letter are not significantly different at P ≤ 0.01. 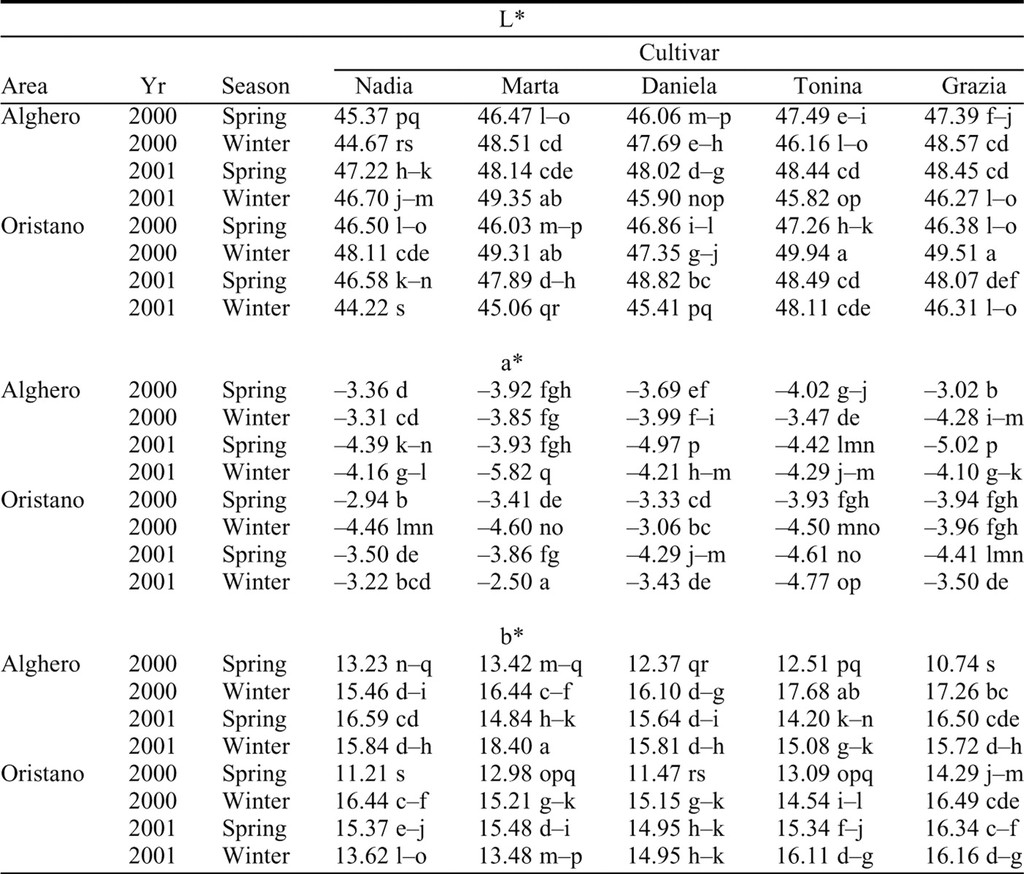 In the analysis of variance, the interactions among year, growing area, season, and cultivar were significant for all studied parameters, except for leaf chlorophyll a, which was influenced by year × growing area × season and year × season × cultivar interactions (data not shown).

Tannin content ranged between 140 and 516 mg/100 g of leaf dry weight (Table 3). The minimum value was recorded for cv Grazia in the Winter 2001 in Oristano, whereas the maximum was registered for cv Tonina in the Spring 2001 in the same location.

Color components of the hydroalcoholic infusions showed few differences among the different samples: L* (brightness) ranged between 49.94 and 44.22; a* (green-red) varied from −5.82 to −2.50; and b* (blue-yellow) ranged between 10.74 and 18.40 (Table 5). All factors influenced the chromatic components of the infusion color except for season for the parameter a* (Table 5). However, the occurrence of significant interactions among all studied factors did not allow for the definition of a clear influence of year, season, locality, and/or cultivar for the color characteristics of infusions, similar to other studied parameters.

The sources of variability considered in the present study had variable influences on the composition of leaves and their relative infusions. However, the interpretation of their single effects is complex because of the existing interactions among them.

Among the different myrtle cultivars, low variability was recorded for leaf composition, especially for tannin and total polyphenol contents, whereas wider differences were observed for chlorophylls. Differences in leaf composition seemed to be influenced by the year of harvest. Growing location was the least influential variable on the polyphenol content of leaves, but a few differences were also determined by the sampling season, particularly for the tannin content of leaves.

Spring leaves are considered more suitable for processing because they are less fibrous and contain more aromatic compounds than winter leaves. However, leaves from myrtle cultivation are generally greener and longer-lived than those of wild plants (Mulas et al., 2002a) because of better water and nitrogen supply. In fact, because our data on winter leaves are acceptable for the hydroalcoholic infusion production, and also considering the lack of differences in the composition of essential oil between spring and winter leaves (unpublished data), we think that winter leaf biomass can also be used to produce white myrtle liqueurs. Considering the great efforts presently made to promote myrtle domestication and the attempts to improve the mechanical harvest of the berries, these findings are important. In fact, because the mechanical harvest of myrtle berries causes a partial defoliation, the leaf biomass may be easily recovered and processed for white myrtle liqueur production (Mulas et al., 2002a).

As observed for red myrtle liqueur obtained by berry infusion (Franco et al., 1998), the industrial processing and infusion dilution have a remarkable influence on the final characteristics of white myrtle liqueur. The observed differences in composition among the various raw materials were only partially transmitted to the corresponding hydroalcoholic infusions. Moreover, all the calculated correlations between the analyzed compounds of leaves and those of infusions were not statistically significant, except for polyphenols, which showed a low correlation anyway (Table 6). This is probably a consequence of differences in the solubility of the analyzed compounds in the hydroalcoholic solution and of the process of transformation and degradation occurring during the first months of infusion. For instance, leaf blade size and its anatomical structure (epidermis and cuticle thickness) may have an important role in the solubilization of the analyzed components in the hydroalcoholic infusion.

Apart from their potentially beneficial health effects, it is known that tannins and polyphenols are generally involved in the bitter taste and astringency of foods and drinks, as well as in their color, together with chlorophylls. Unfortunately, some polyphenols produce an irreversible turbidity in bottled beverages. Therefore, high polyphenol content is undesirable to obtain a high physical stability in some drinks (e.g., beers and wines). The muddy appearance of myrtle leaf infusions and liqueurs may be because of their high phenol content.

The dark color of leaf hydroalcoholic infusions (L*) seemed not to be related with leaf chlorophyll content (Table 6). However, the negative correlations found between infusion L* and infusion content of chlorophylls, tannins, and polyphenols clearly indicate that those components as responsible for the pale brown color of myrtle infusion. The other two color components (a* and b*) showed low correlations with other leaf and infusion compounds, but were correlated between themselves and with the L* parameter, especially for a*.

Finally, the lack of relevant differences among cultivars for the analyzed compounds may be considered a positive finding, in the perspective of an easy standardization of the industrial production of liqueurs and for the assurance of a good quality of the final product.

Monthly rainfall (bars) and mean air temperature (lines) in Alghero and Oristano in 2000 and 2001. 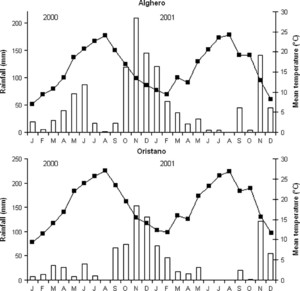