‘Chiquitita’ is a new olive (Olea europaea L.) cultivar obtained in a crossbreeding program in Córdoba, Spain. ‘Chiquitita’ was derived from a cross carried out in 1991 between ‘Picual’ and ‘Arbequina’, two cultivars with high productivity and oil content from different geographical origins: ‘Arbequina’ from Catalonia in the northeast of Spain and ‘Picual’ from Andalusia in the south of Spain (Rallo, 1995). The results of the agronomical evaluation carried out in Córdoba allow the final selection of ‘Chiquitita’ as a new olive cultivar with early bearing, high oil content, and yield efficiency. Its low vigor and compact and weeping growth habit make it particularly adapted to high-density hedgerow orchards. ‘Chiquitita’ is the first olive cultivar developed by the cooperative breeding program carried out by the University of Córdoba and the Institute of Agricultural and Fishery Research and Training (IFAPA).

The original seedling of ‘Chiquitita’ (progeny UC-I 8-7 in the breeding records) was derived from a cross between ‘Picual’ (female) and ‘Arbequina’ (male) carried out in 1991. The seedling was planted in the field in 1994 at the experimental farm of IFAPA Centro Alameda del Obispo of Córdoba. The first crop was obtained in 1996 and seedling evaluation was carried out for three consecutive harvest seasons. The original seedling of ‘Chiquitita’ was selected mainly on the basis of their early crop (short juvenile period) and high oil content, showing also compact and weeping growth habit (León et al., 2004). Fifteen selected genotypes, including ‘Chiquitita’, and the three previously cited genitors used as controls were propagated by semihardwood stem cuttings in Spring 2000 and planted in a comparative trial at the experimental farm of IFAPA Centro Alameda del Obispo of Córdoba in July 2001. A randomized block design with 16 replications and one tree per elementary plot were used. The evaluation of the genotypes confirmed the previous results recorded at the seedling stage and allowed the final selection of ‘Chiquitita’ as a new olive cultivar. A new comparative field trial with ‘Chiquitita’ in high-density hedgerow orchards has been already planted in 2007. More comparative trials are currently planned in several locations in Spain.

Morphological description was carried out according to Barranco et al. (2000) by using a total of 25 characters of the tree, leaf, fruit, and endocarp. Cultivar identification by molecular markers was performed with 10 microsatellite loci previously used for paternity testing in the breeding program (Díaz et al., in press). Agronomical description takes into account the results of the agronomical evaluation of ‘Chiquitita’ carried out in the original seedling field and the comparative field trial established both at the experimental farm of IFAPA Centro Alameda del Obispo of Córdoba. Because high-density hedgerow orchards seem to be the main direct application of this new cultivar, agronomical results of ‘Chiquitita’ are compared with those of ‘Arbequina’, the standard variety currently used for this new orchard system.

The 10 microsatellite loci previously used to test the paternity of ‘Chiquitita’ confirm the authenticity of the cross and unequivocally identify the cultivars from its parents (Table 1). Additionally, the probability of finding other seedlings of the same cross with the same allele combination is 7.63e-06.

Allelic profiles of the 10 microsatellite markers for Arbequina, Picual, and the new cultivar Chiquitita.

‘Chiquitita’ presented a significantly lower vigor than ‘Arbequina’ in the comparative field trial plot established in 2001. ‘Arbequina’ trees reached more than 3 m height in the third season with more than 2 m width the next one, whereas ‘Chiquitita’ trees did not reach these values yet 5 years after planting. As a consequence, the vigor of ‘Chiquitita’ in terms of canopy volume remained ≈60% to 70% of ‘Arbequina’ across years (Table 2). ‘Chiquitita’ showed a compact and weeping habit of growth with dense canopy and branches trending downward with crop so that canopy volume remains low. ‘Arbequina’ is considered a low–medium vigor cultivar, which, together with its good agronomical performance, makes it the standard variety currently used in high-density hedgerow orchards. However, even low–medium vigor cultivars such as ‘Arbequina’ have shown early competition among trees for radiation in high-density hedgerow orchards so that lower vigor cultivars are demanded for this system. For these reasons, we consider that ‘Chiquitita’ could be an alternative cultivar to ‘Arbequina’ for this new orchard system to ensure ease of management and less pruning cost for a longer period. Moreover, ‘Chiquitita’ trees adopted naturally a monocone shape with a central leader form in some cases, which suggests that it could be easy to train for the high-density hedgerow orchard system.

Canopy volume evolution of Chiquitita compared with Arbequina 3 to 5 years after planting.

Earliness of bearing and productivity.

Initially selected in the seedling stage for its short juvenile period, ‘Chiquitita’ has showed afterward a short unproductive period as well with a first significant bearing 2 years after planting. Both ‘Chiquitita’ and ‘Arbequina’ showed 100% of bearing trees 3 years after planting, although the average unproductive period was a little bit shorter in the second one (2.5 versus 2.1 years). No significant differences in early fruit yield between ‘Chiquitita’ and ‘Arbequina’ were observed with average cumulative fruit yield in the first two seasons of 6.4 ± 0.9 and 7.4 ± 1.2 kg, respectively. Yield efficiency, calculated as accumulated fruit or oil yield per canopy volume unit, was also similar in both cultivars across years showing ‘Chiquitita’ had even higher values in the first years (Table 3). Any tendency to biennial bearing was not observed, although further evaluation would be required in the following years once the trees reach their full bearing stage.

Yield efficiency evolution of Chiquitita compared with Arbequina 3 to 5 years after planting.

‘Chiquitita’ showed higher fruit weight and fruit removal force than ‘Arbequina’ (Table 4). However, the fruit weight/fruit removal force ratio was lower, which indicates a better potential mechanical harvesting aptitude by trunk shakers. Nevertheless, this character has no clear influence for straddle-harvested machine efficiency used for high-density hedgerow orchards harvesting. Average oil content on a fruit fresh weight basis was similar in both cultivars, although ‘Chiquitita’ showed higher oil content on a fruit dry weight basis than ‘Arbequina’ as a result of its higher moisture content.

Mean values of Chiquitita compared with Arbequina for fruit characters.

The fatty acid composition of ‘Chiquitita’ and ‘Arbequina’ was almost coincident (Table 5). Both cultivars are characterized by a medium–high content of palmitic and linoleic acid and medium–low oleic acid content.

‘Chiquitita’ has been applied for registration under the terms of the Spanish and European Union (EU) laws and several countries outside EU (application numbers not yet available). Information on the availability and inquiries regarding nursery licensing or acquisition can be obtained at www.chiquitita.es.

Vigor and growth habit of ‘Chiquitita’ (A) and ‘Arbequina’ (B) in Apr. 2007, the sixth year after planting.

Fruit and endocarp of ‘Chiquitita’. 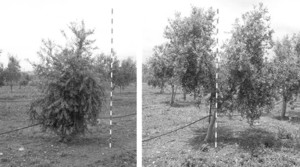 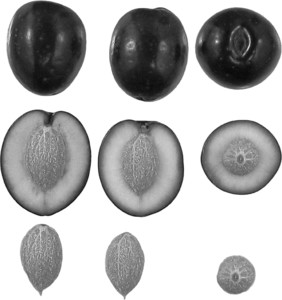