The wholesale value of herbaceous perennials produced in the United States has grown by 63% in the last 5 years, reaching over $708 million in 2005 (U.S. Department of Agriculture, 2006). This increase in sales of herbaceous perennials can at least partly be attributed to the increasing ability of producers to force and market perennials in flower for scheduled market dates. Forcing perennials to flower on specific dates requires an understanding of the regulation of flowering and subsequent manipulation of environmental factors, including photoperiod and temperature, to promote flower induction.

Flowering of many winter annuals, biennials, and perennials is promoted after exposure to low temperatures. This phenomenon, known as vernalization, has been defined as “the acquisition or acceleration of the ability to flower by a chilling treatment” (Chouard, 1960), and a low-temperature treatment that induces or accelerates flowering has been referred to as vernalization treatment (Napp-Zinn, 1987). An important aspect of vernalization is the temporal separation of the thermoinductive treatment and the flowering response. Therefore, at the end of thermoinductive treatment, the only visible indicator of completion of vernalization requirement is the subsequent flowering after exposure to higher temperatures. Insufficient vernalization can result in incomplete or delayed flowering, which can cause considerable monetary losses to commercial producers of herbaceous perennials.

To create stockplants, shoot-tip cuttings were taken from a single nonvernalized D. gratianopolitanus ‘Bath's Pink’ plant, rooted, and transplanted into 13-cm-square pots (1.1 L) filled with a commercial peat–perlite media (Sure-Mix; Michigan Grower Products, Galesburg, MI). Stockplants were maintained in a glass greenhouse set at 20 °C under a 16-h photoperiod from 0600 to 2200 hr provided by a combination of sunlight and high-pressure sodium (HPS) lamps. HPS lamps turned on when the ambient light was below 200 μmol·m−2·s−1 and turned off when ambient light was above 400 μmol·m−2·s−1 and provided an additional 150 μmol·m−2·s−1 photosynthetic photon flux (PPF). Plants were hand-watered when necessary with reverse osmosis water containing nutrients (125 N, 12 P, 100 K, 65 Ca, 12 Mg, 1.0 Fe, 0.5 Mn, 1.0 Cu, 0.3 B, 0.1 Mo mg·L−1; MSU Special, Greencare Fertilizers, Chicago).

To initiate an experiment, shoot-tip cuttings with six to eight nodes (leaves are opposite) were harvested from stockplants and dipped in a commercial rooting hormone (Dip ‘N Grow, Clackamas, OR) containing 1 g·L−1 indole-3-butyric acid and 0.5 g·L−1 naphthalene acetic acid and were rooted in 72-cell trays (50-mL cell volume; Landmark Plastic Corporation, Akron, OH) containing 50% commercial peat–perlite media (Sure-Mix; Michigan Grower Products) and 50% coarse perlite (Therm-O-Rock; East Inc., New Eagle, PA). Cuttings were rooted under mist for ≈2 weeks in a propagation facility with air and medium temperature set points of 23 and 26 °C, respectively, and a 0.3 kPa vapor-pressure deficit that was generated by injecting water vapor into the air. After rooting, propagules were grown in 72-cell plug trays (50-mL cell volume per plant) filled with the previously described media and grown under the same environmental conditions and nutritional regimen as stockplants until vernalization experiments were initiated.

In all three experiments, after vernalization treatments, plants were transplanted into 13-cm-square plastic containers (1.1 L) filled with commercial soil-less medium (Sure-Mix) and randomly placed on benches and grown in a glass greenhouse under a 16-h photoperiod at a 20 °C greenhouse temperature set point and were maintained under the same nutritional regimens as stockplants.

The environmental conditions in the greenhouse were regulated by a climate control computer (Model CD750; Priva, De Lier, The Netherlands). Type E thermocouples (TT-E-40; Omega Engineering, Stamford, CT) placed in aspirated tubes measured temperature at plant height on every greenhouse bench and the light intensity at plant height was measured by line quantum sensors that each contained 10 photodiodes (Apogee Instruments, Logan, UT) at two locations in the greenhouse. Temperature and light sensors were connected to a CR10 datalogger (Campbell Scientific, Logan, UT) and data were collected every 10 s, and hourly means were computed and recorded by a computer. The average daily temperatures (ADT) and mean photosynthetic daily light integrals (DLI) received by each plant were computed from the day of transplant until the day of anthesis for all flowering plants. For vegetative plants, ADT and DLI were computed for 15 weeks from the date of transplant. The ADT and DLI of plants transplanted on the same date are reported in Table 1.

At transplant, the number of nodes was recorded. At anthesis of the first flower, the date and number of nodes on the primary shoot were recorded in all experiments. Additionally, the number of flowers at anthesis was recorded in Expts. II and III, and the number of vegetative and reproductive laterals were recorded and the percentage of reproductive laterals was computed in Expt. III. Plants without a visible flower bud 15 weeks after transplant were considered nonflowering. In all experiments, 10 plants were subjected to each treatment combination and were arranged in a completely randomized design. Data from Expt. I were subjected to analysis of variance using SAS's PROC MIXED (SAS Institute, Cary, NC). Data for Expts. II and III were not significantly different at P = 0.05 and hence were pooled for analysis as a factorial experiment with vernalization temperature and duration as treatment factors using SAS's PROC MIXED. Least significant difference procedure was used for paired comparisons with P = 0.05 as a maximum value for significance.

Vernalization promoted flowering of D. gratianopolitanus ‘Bath's Pink’. The time to anthesis of nonvernalized control plants was highly variable. In Expt. I, the single nonvernalized flowering plant reached anthesis in 114 d (Fig. 1B). In the subsequent experiments, 21% of nonvernalized plants reached anthesis in an average of 58 d (Fig. 2B). Osteospermum ecklonis Norl., another perennial with a quantitative vernalization requirement, flowered occasionally without vernalization treatment and time to flower varied widely (Suzuki and Metzger, 2001). We postulate that D. gratianopolitanus ‘Bath's Pink’ plants that remained vegetative for 15 weeks (the final duration of our experiments) may have eventually flowered, which would have considerably increased the mean time to anthesis for the entire population.

Time to anthesis and the mean number of nodes at anthesis significantly decreased as the duration of vernalization at 0 °C increased to 4 weeks. All D. gratianopolitanus ‘Bath's Pink’ flowered and did so more rapidly after 4 weeks at 5 °C compared with 4 weeks at 0 °C. However, 6 or more weeks at 0 °C or 5 °C were equally effective in promoting flowering based on flowering percentage and flowering time.

Vernalization treatment at 10 °C for 6 or less weeks elicited less than 100% flowering after 15 weeks in the greenhouse, when the experiment was ended. It is possible that nonflowering plants in these treatments may have eventually flowered, which would have increased the average flowering time and node number. An 8-week treatment at 10 °C induced 100% flowering; however, plants took significantly longer to reach anthesis and developed more nodes before anthesis compared with plants vernalized at 0 °C for 6 or more weeks or 5 °C for 4 or more weeks. Therefore, 0 and 5 °C were more effective than 10 °C in promoting flowering of D. gratianopolitanus ‘Bath's Pink’. Based on flowering percentage, flowering time, and node number at anthesis, D. gratianopolitanus ‘Bath's Pink’ was not completely vernalized at 15 °C after 8 weeks.

Flowering response of Dianthus gratianopolitanus ‘Bath's Pink’ after vernalization at 5 °C for increasing durations (Expt. I). Open symbols represent the means for flowering plants and vertical bars represent ses. In A, flowering percentage was computed 15 weeks after transplant. 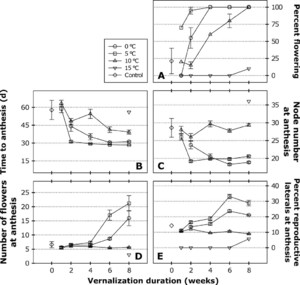