Caladiums (Caladium × hortulanum Birdsey, Araceae Juss.) are tropical ornamental aroids often used as potted plants or for providing color in the landscape. The propagules used in pots or landscapes are tubers, the underground storage organ of these plants. More than 95% of the caladium tubers used worldwide are produced in central Florida (Bell et al., 1998). Large-scale commercial production of caladium tubers in Florida began in the late 1940s. Since then, the field planting acreage has increased to ≈526 ha (Deng et al., 2005). Like in other flower or bedding plant crops, one of the propelling forces for the growth of the industry is introduction of new or improved cultivars. In response to the industry's demand, the University of Florida initiated a caladium breeding program at its Gulf Coast Research and Education Center in Bradenton, FL, in 1976. Since then, this breeding program has led in development and release of new cultivars for the caladium industry.

‘Cranberry Star’ (Fig. 1) is a new cultivar with a unique combination of leaf and tuber characteristics that make it ideal for use as a potted plant or for growing as an accent or border plant in shady landscapes. It produces numerous bright white leaves with green main and secondary veins that are similar to leaves of one of the most popular cultivars, ‘Candidum’, yet ‘Cranberry Star’ has numerous bright purple spots on its leaves. Tubers of this cultivar are multiple-branched, and de-eyeing is not required even when forcing in small containers (11.4 cm in diameter). This trait can help growers save time and costs in preparing tubers for pot-forcing (Evans et al., 1992; Harbaugh and Tjia, 1985). In addition, ‘Cranberry Star’ had significantly higher tuber yields and value when compared with other popular commercial cultivars that were in tests for 2 years. All these characteristics should benefit growers producing tubers and marketing potted or bedding plants as well as consumers and landscapers using ‘Cranberry Star’.

‘Cranberry Star’ was derived from a cross between a lance-leaved caladium selection C35a and a white fancy-leaved (heart-shape) caladium seedling UF-85245 (Fig. 2) and evaluated initially in 2001 as UF-75-37. Plant C35a was selected as the female parent because of its bright leaf spots, whereas UF-85245 was selected because of its plant vigor, large number of leaves, bright white leaf color, excellent tuber yield, and resistance to fusarium tuber rot. C35a was derived from the commercial cultivar ‘Gingerland’ and UF-85245 from a cross between ‘Aaron’ and ‘Candidum Junior’. Ancestry of ‘Gingerland’ and ‘Aaron’ is unknown, but ‘Candidum Junior’ is believed to be a field mutation of ‘Candidum’ (Wilfret, 1993). Tubers were propagated on fumigated EauGallie fine sandy soils at the Gulf Coast Research and Education Center in Wimauma, FL, and were treated with hot water (50 °C for 30 min) for nematode control (Rhodes, 1964).

‘Cranberry Star’ plants grown for ≈4 months in full sun in ground beds had an average height of 45.3 cm (Table 1). Jumbo tubers are multisegmented, bearing five to six dominant buds. Tuber surfaces are brown (RHS 200C) with the cortical area yellow–orange (RHS 15C). Leaves are peltate, sagitate-cordate, with green (RHS 137A) palmate–pinnate venation. The upper surface has a green (RHS 137A) margin, 1 to 2 mm wide, bordering the entire leaf except for the basal leaf valley where it is grayed–purple (RHS 185A). Interveinal areas are white (RHS 157C). Leaves have numerous (30 to 160) irregularly shaped (1 to 40 mm in length) grayed–purple (RHS 185A) spots. A very light and inconspicuous netted green (RHS 138C) venation occurs on 75% to 100% of the leaf surface. The undersurface has a narrow (1 to 3 mm wide) grayed–green (RHS 191B) margin. Primary veins are grayed–green (RHS 191B), and netted venation is grayed–green (RHS 191B) and occurs over the entire leaf surface. Interveinal areas are quite variable in color with a green–white (RHS 157C) color near the center to a grayed–green (RHS 194D) near the margin. Grayed–purple spots (RHS 186A) are numerous and scattered between primary veins. Petioles are 3 to 5 mm and light green (RHS 139D) at the apex, but the colors diffuse into a dark brown (RHS 200B) at the base that is ≈6 mm in diameter.

Leaves of ‘Cranberry Star’ are similar in size to that of many other cultivars. The largest leaf on plants grown in a 50% shaded greenhouse produced from an intact No. 1 tuber in an 11.4-cm pot averaged 23 cm long and 15 cm wide 8 weeks after planting (Table 2). When grown from 2.54-cm tuber propagules in ground beds in full sun, the youngest mature leaf on a plant measured ≈4 months from planting averaged 26 cm long and 16 cm wide (Table 1).

Plant performance for caladium cultivars grown from No. 1 tubers in 11.4-cm containers in a 50% shaded glasshouse, 2007, Wimauma, FL.z

‘Cranberry Star’ was evaluated for tuber production and plant performance at the Gulf Coast Research and Education Center in Wimauma, FL, in 2005 and 2006. The soil was an EauGallie fine sand with ≈1% organic matter and a pH of 6.2. Plants were grown in a plastic-mulched raised-bed system maintaining a constant water table with seep irrigation (Geraldson et al., 1965). In 2005, ground beds were fumigated on 25 Feb. (6 weeks before planting) with a mixture of 67% methyl bromide and 33% chloropicrin (by volume) at the rate of 392 kg·ha−1, and in 2006, the beds were fumigated on 10 Mar., 10 d before planting, with the same fumigant mixture but at 196 kg·ha−1. The beds were 91 cm wide and 20 cm high with 2.54-cm caladium seed pieces (cut tuber propagules) planted 15 cm apart in three rows. Osmocote 18N–2.6P–10K 8- to 9-month controlled-release fertilizer (Scotts Co., Marysville, OH) was applied to the bed surface when shoot tips were emerging from the soil with nitrogen at 336 kg·ha−1.

Field plots were organized in a randomized complete block design consisting of three replications. For tuber production, each plot was 1.2 m2 and contained 30 propagules. Tubers were dug in Nov. 2005 and Dec. 2006. Tubers were graded by maximum diameter: No. 2 (2.5 to 3.8 cm), No. 1 (3.8 to 6.4 cm), Jumbo (6.4 to 8.9 cm), Mammoth (8.9 to 11.4 cm), and Super Mammoth (greater than 11.4 cm). The production index is an indicator of economic value of the harvested tubers and was calculated as: N (No.2s) + 2N (No. 1s) + 4N (Jumbos) + 6N (Mammoth) + 8N (Super Mammoth) in which N = number of tubers in each grade (Deng and Harbaugh, 2006). For plant performance in the landscape, three plants (i.e., subsamples) were measured in the center of each plot and plant height, leaf number, and leaf size of the youngest mature leaf on each plant were measured midsummer. An analysis of variance was conducted using the general linear model provided in SAS (PROC GLM; SAS Institute, 2003) to compare tuber production and plant performance of ‘Cranberry Star’ with that of ‘Marie Moir’, ‘Miss Muffet’, and ‘Candidum’. 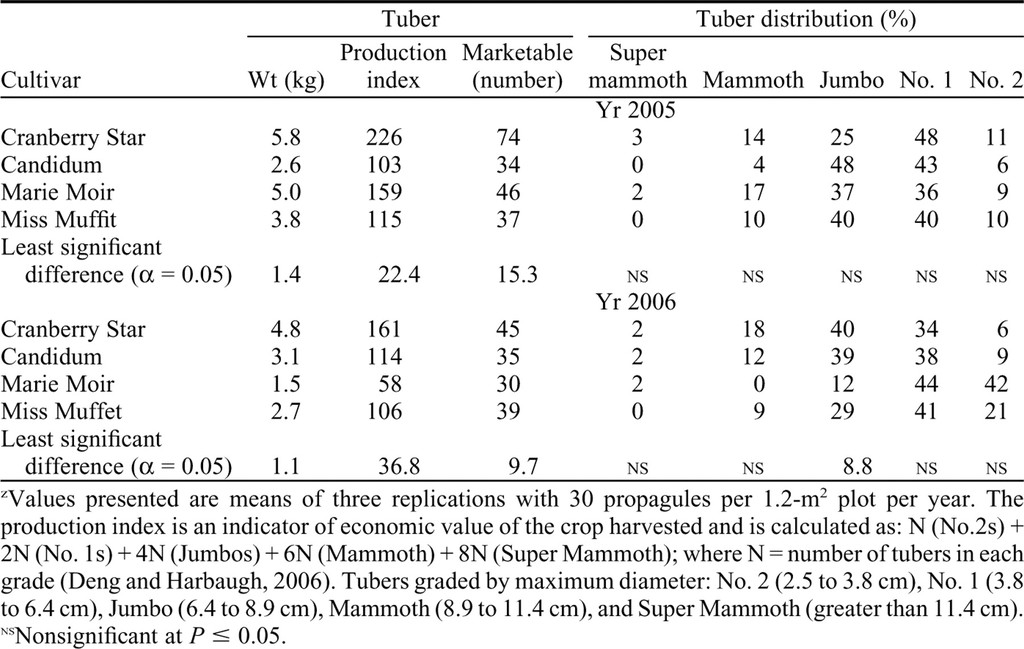 Landscape performance of cultivars grown under full sun conditions was evaluated in 2005 on the same plots used for evaluating tuber production. Plant height, number of leaves, and foliar characteristics were recorded ≈3 and 4 months after planting. The overall plant performance was rated on a scale of 1 to 5 with 1 being very poor (few leaves and lack of vigor) and 5 being excellent (full plants, numerous leaves, and bright color display). An analysis of variance was conducted as described previously to compare the performance of ‘Cranberry Star’ with that of ‘Marie Moir’, ‘Miss Muffet’, and ‘Candidum’. ‘Cranberry Star’ had a rating of 4 at the 3-month evaluation, significantly higher than ‘Morie Moir’, ‘Miss Muffet’, and ‘Candidum’, and a rating of 4.6 at the 4-month evaluation, also higher than the three commercial cultivars (Table 1).

The suitability for container-forcing was evaluated by forcing tubers in 11.4-cm containers. No. 1 tubers were planted either intact or de-eyed in a peat/vermiculite mix (VerGro Container Mix A; Verlite, Tampa, FL) on 26 Mar. 2007. The study was conducted in a greenhouse with 50% light exclusion during the summer in Wimauma, FL. Average daily temperatures ranged from 16 °C night to 29 °C day during the experiment. Potted plants were arranged on metal benches in the greenhouse in a randomized complete block design with 10 replications. Plant height, number of leaves, and foliar characteristics were recorded 8 weeks after planting. Plants were rated on a scale of 1 to 5 for their quality as a pot plant with 1 being poor, 3 fair and acceptable, and 5 excellent in plant fullness and symmetry. An analysis of variance was conducted as described previously to compare ‘Cranberry Star’ with ‘Marie Moir’, ‘Miss Muffet’, and ‘Candidum Junior’.

In summary, ‘Cranberry Star’ is intended for use in containers and shady landscapes. Its performance was outstanding both in pots and landscapes and far superior to ‘Marie Moir’, a cultivar that has a leaf color and pattern that is closest of all cultivars that we are aware of in the commercial trade. It also outperformed ‘Candidum’ and ‘Miss Muffet’, two cultivars that are considered very profitable to grow by the tuber-producing industry and valued in the pot and landscape industries. Although extensive research and evaluations of this cultivar have been performed on small acreages, tuber producers are encouraged to plant only limited quantities of ‘Cranberry Star’ until they have gained experience in producing this cultivar. Standard postharvest treatment of tubers is recommended (Harbaugh and Tjia, 1985) and preplant hot water treatment of tubers is encouraged to prolong their life.

‘Cranberry Star’ plant produced by forcing one de-eyed No. 1 tuber (3.6 to 6.4 cm in diameter) in an 11.4-cm square pot. Photo was taken 8 weeks after the tuber was planted in the pot. 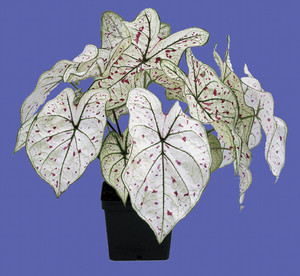