Sweet corn is an important vegetable crop in Ontario, valued at nearly $23 million (Mailvaganam, 2006). Currently, there are only three registered soil-applied herbicides for annual grass control: dimethenamid, EPTC and S-metolachlor (Ontario Ministry of Agriculture, Food, and Rural Affairs, 2006). The registration of pyroxasulfone would provide Ontario sweet corn producers with a new, broad-spectrum herbicide that controls selected annual grass and broadleaf weed species. Furthermore, if used in a diversified, integrated weed management program, it would reduce the selection intensity for herbicide-resistant weeds. Although the mode of action of pyroxasulfone is not completely understood, it is thought to be a seedling growth inhibitor that interferes with fatty acid biosynthesis. The spectrum of weeds controlled with pyroxasulfone is similar to the acetanilide herbicides such as S-metolachlor, acetochlor, and alachlor. However, pyroxasulfone provides superior control of certain important broadleaf weeds such as common ragweed and velvetleaf when compared with other acetanilide herbicides (Dyer et al., 2004; Geier and Stahlman, 2004). Pyroxasulfone may also provide superior control of some annual grasses such as wild proso millet (Panicum miliaceum), fall panicum (Panicum dichotomiflorum), and crabgrass (Digitaria spp.) (Anonymous, 2006). Pyroxasulfone has a relatively long soil half-life at 35 to 45 d (Anonymous, 2006).

The experiments were arranged in a split-plot design with four replications. The main plots were pyroxasulfone rate, and the subplots were sweet corn hybrids. Selection of herbicide rates was based on the manufacturer-recommended use rates for the soil type. Treatments consisted of a nontreated control and two rates of pyroxasulfone (0, 209, and 418 g/a.i./ha−1) representing the untreated control and 1× and 2× of the proposed label rate. Eight of the most commonly grown processing sweet corn hybrids in southwestern Ontario encompassing a range of endosperm genotypes were selected: Harvest Gold (Su), GH2041 (Su), GH9589 (Su), GSS9299 (Sh2), GG214 (Su), GG446 (Su), GG763 (Sh2), and GG447 (Su). Each of the main plots was 6 m wide × 8 m long at Ridgetown and 6 m wide ×10 m long at Exeter. The subplots each consisted of a single row of each sweet corn hybrid with rows planted 75 cm apart. The sweet corn was thinned to 50,000 plants/ha shortly after emergence.

To maintain the trial weed-free, a preplant-incorporated application of a preformulated mixture of S-metolachlor plus atrazine (1:0.8) was applied before planting at 2.16 and 2.88 kg·ha−1 a.i. at Exeter and Ridgetown, respectively. In 2006, at Ridgetown, an additional herbicide application of 280 g·ha−1 a.i. of bromoxynil and 1.12 kg·ha−1 a.i. of atrazine was applied postemergence (POST) for broadleaf weed control. The plots were then kept weed-free using interrow cultivation and hand-hoeing as required.

Crop injury, including stand reduction, was rated visually between the nontreated hybrids compared with the respective treated hybrids on a scale of 0% to 100% at 7, 14, and 28 d after emergence (DAE). A rating of 0% was defined as no visible effect of the herbicide and 100% was defined as plant death. Average corn height (based on 10 random plants per subplot) was measured for each subplot 21 DAE. The height of the plant was defined as the maximum height from the soil surface with the leaves fully extended. At maturity, each subplot was harvested by hand and cob size; marketable (a cob greater than 5 cm in diameter) and total yields were recorded. Because the statistical analysis for total and marketable yields were similar, only marketable yields are reported.

All data were subjected to analysis of variance. Tests were combined over locations and years and analyzed using the PROC MIXED procedure of SAS (Statistical Analysis Systems, 1999). Variances of percent crop injury at 7, 14, and 28 DAE; plant height; cob size; and yield were partitioned into the fixed effects of herbicide treatment, hybrid, and herbicide–hybrid interaction and into the random effects of site–year, block (site-yr), site year–treatment, site year–hybrid, and site year–hybrid–treatment. Significance of random effects was tested using a Z-test of the variance estimate and fixed effects were tested using F-tests. Error assumptions of the variance analyses (random, homogeneous, normal distribution of error) were confirmed using residual plots and the Shapiro-Wilk normality test. To meet the assumptions of the variance analysis, visual injury at 7, 14, and 28 DAE were subjected to an arcsine square root transformation and cob size data were log-transformed (Bartlett, 1947). Treatment means were separated using Fisher's protected least significant difference test. Means of percent injury and cob size were compared on the transformed scale and were converted back to the original scale for presentation of results. Type I error was set at 0.05 for all statistical comparisons.

Statistical analysis of the data on visible injury, plant height, cob size, and yield showed that the random effects of location, year, year by location, and interactions with treatments were not significant. Therefore, data were pooled and averaged over years and locations (Tables 1–4).

Sweet corn hybrid visible injury (%) 7, 14, and 28 d after emergence (DAE) when treated with pyroxasulfone applied preemergence at Exeter and Ridgetown, ON, Canada, in 2005 and 2006.z

Sweet corn hybrid plant height (cm) 21 d after emergence when treated with pyroxasulfone applied preemergence at Exeter and Ridgetown, ON, Canada, in 2005 and 2006.z 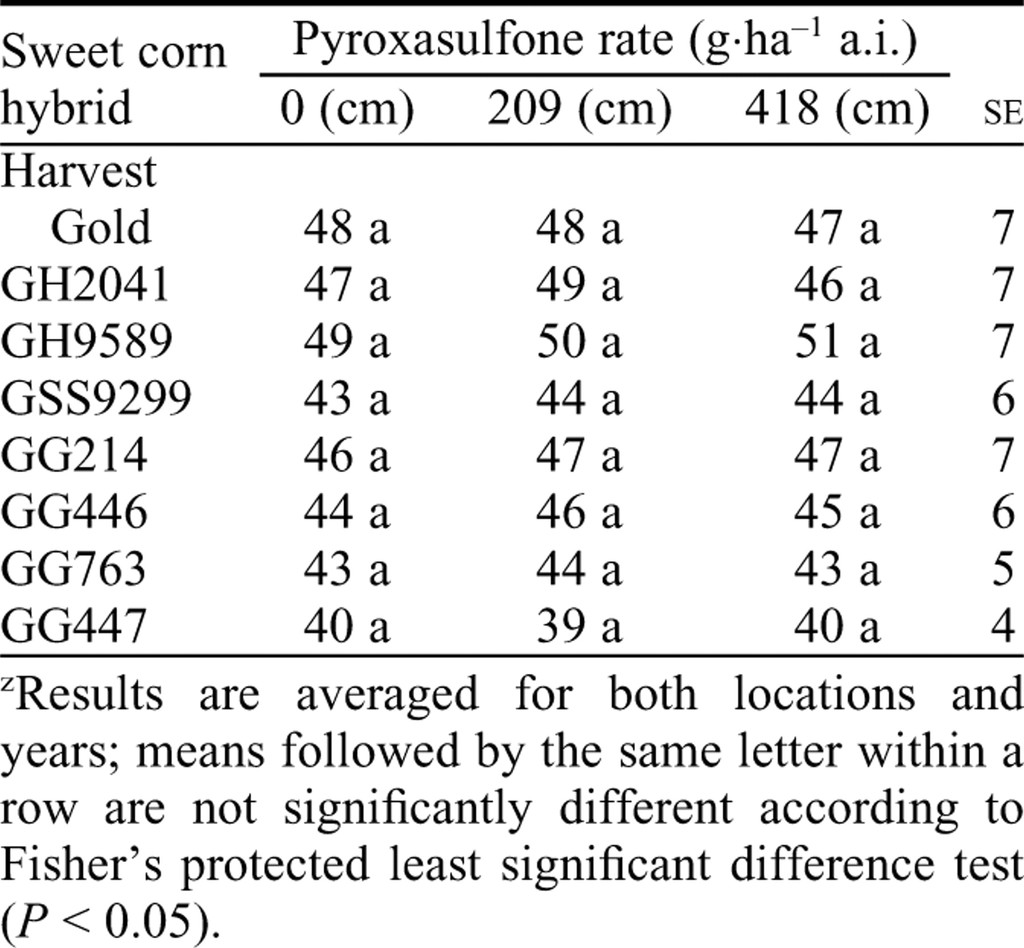 Sweet corn hybrid cob size (g) treated with pyroxasulfone applied pre-emergence at Exeter and Ridgetown, ON, Canada, in 2005 and 2006.z 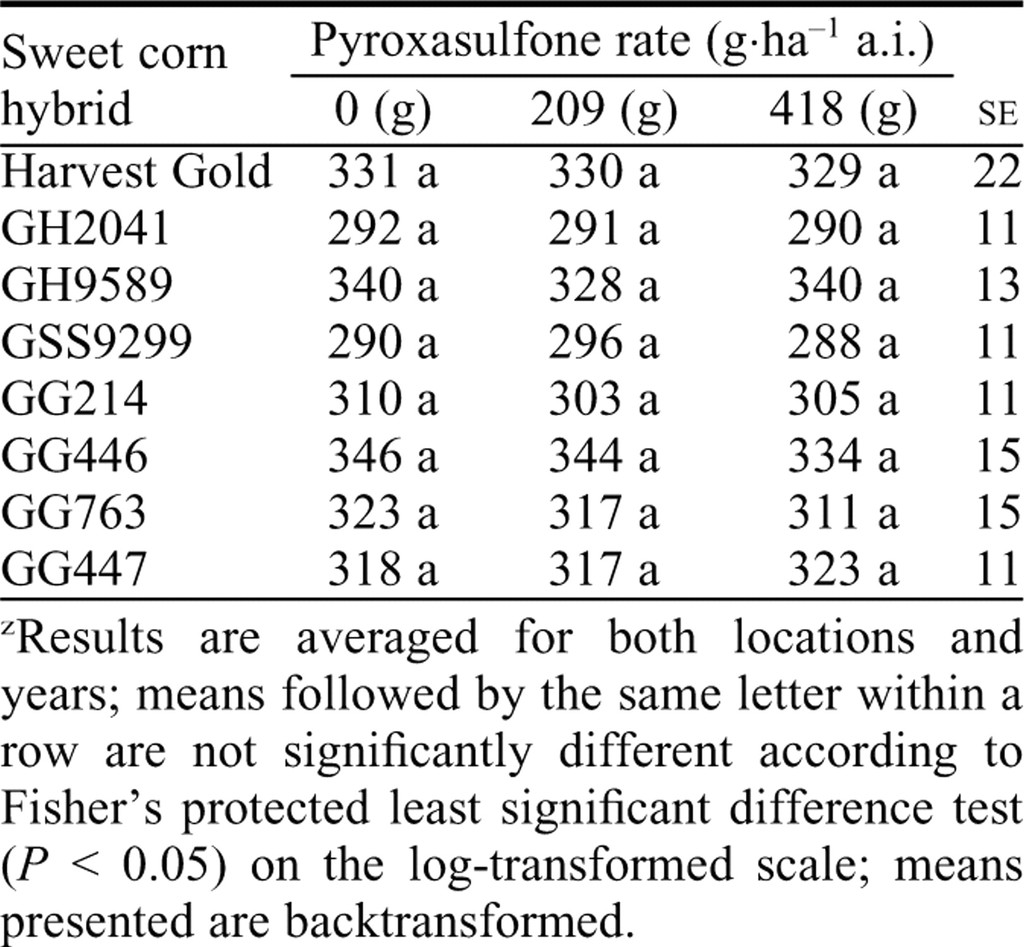 Sweet corn hybrid yield (t·ha−1) treated with pyroxasulfone applied pre-emergence at Exeter and Ridgetown, ON, Canada, in 2005 and 2006.z 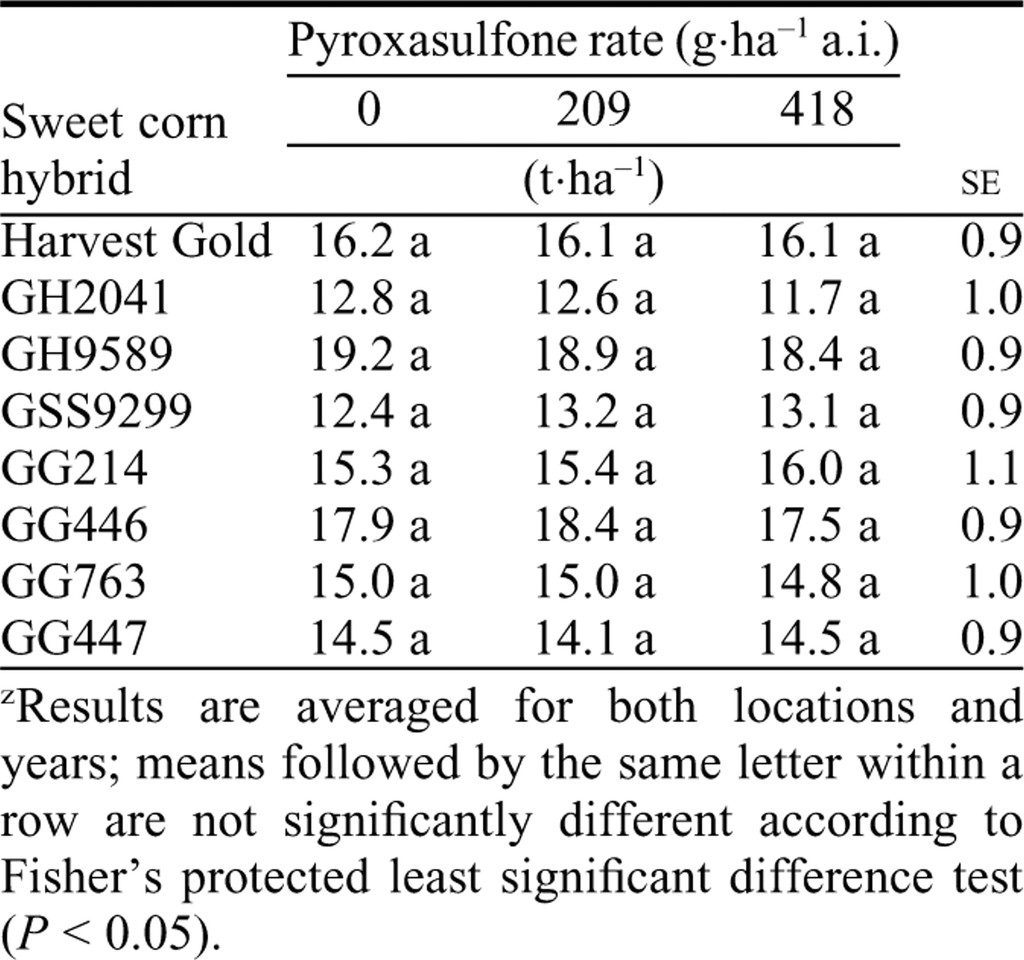 Pyroxasulfone did not have any detrimental effect on cob size, regardless of sweet corn hybrid or herbicide application rate (Table 3). Other studies have shown that cob size of susceptible varieties can be reduced by up to 67% (Soltani et al., 2005b).

Yield of Harvest Gold, GH2041, GH9589, GSS9299, GG214, GG446, GG763, and GG447 sweet corn hybrids were unaffected by the application of pyroxasulfone at 209 or 418 g·ha−1 a.i. (Table 4). Other herbicides such as clopyralid (Soltani et al., 2005a) and topramezone (Soltani et al., 2007) also caused no reduction to yield when the herbicide was applied at the label rate. These results are in contrast to other studies that have shown that susceptible varieties can be negatively affected by certain herbicides. For example, Diebold et al. (2004), showed that bentazon can reduce the yield of Delmonte 2038 by up to 94%. Foramsulfuron has been shown to cause a 92% or greater reduction in yield of Delmonte 2038 when the herbicide is applied at the registered rate (Diebold et al., 2003). Soltani et al. (2005b) demonstrated that the yield of the highly sensitive hybrid Delmonte 2038 could be reduced by 98% by thifensulfuron-methyl, and the yield of four moderately sensitive hybrids (Empire, GH1861, GH2298, and GH2684) can be reduced by 51% to 77%. When mesotrione (O'Sullivan et al., 2002), nicosulfuron (O'Sullivan et al., 2000), or nicosulfuron plus rimsulfuron (O'Sullivan et al., 1995; O'Sullivan and Bouw, 1998) was applied to sensitive hybrids, yield decreased as application rate increased.