Blueberry acreage has increased substantially in the southeastern United States during the past 5 years and further expansion is expected for the foreseeable future (National Agricultural Statistics Service, 2007; Strik and Yarborough, 2005; Williamson and Lyrene 2004b). Many new southern highbush blueberry (SHB) plantings in the southeastern United States are grown in pine bark beds that are 15 to 20 cm deep and of varying widths rather than in the underlying soil (Williamson et al., 2006; Williamson and Lyrene, 2005). Pine bark culture provides an ideal substrate for blueberry roots (Clark and Moore, 1991; Lyrene, 1990) and this practice allows for commercial blueberry production in areas with native soils that are poorly suited for blueberry production. Moreover, containerized blueberry production using pine bark as the growing medium has increased in the southeastern United States during the past 10 years, particularly in areas where the climate allows for early production but soils are not suitable for blueberry (personal observation). Blueberry production in greenhouses, plastic tunnels, and other protective culture systems may have potential for earlier, or extended, fruit harvest seasons (Ciordia and Diaz, 2006; Heiberg and Lunde, 2006; Ozeki and Tamada, 2006; Pliszka, 1996). Containerized plants are well suited to such temporary systems. General guidelines for blueberry fertilization are available from most Land Grant Universities (Krewer and Nesmith, 2006; Pritts and Hancock, 1992; Williamson et al., 2006; Williamson and Lyrene, 2005); however, little information is available for fertilization requirements in pine bark or containerized production systems. The objective of this study was to determine the effect of fertilizer rate and composition on growth and yield of two SHB blueberry cultivars grown in a containerized pine bark production system.

One-year-old ‘Misty’ and ‘Star’ SHB nursery plants were obtained from a north Florida nursery in April 1999, and potted in 30-cm diameter 19-L containers using small-nugget pine bark as the growing medium. Initial plant height and canopy width were measured. The plants were arranged in a randomized complete block design with seven replications and grown outdoors at the University of Florida greenhouse complex in Gainesville, FL. Plant spacing was 0.6 m in rows with 1 m between rows. The treatments consisted of two fertilizer analyses applied at three rates to two cultivars using a two-cultivar × two-analysis × three rate factorial arrangement of treatments. The two fertilizer analyses were: 1) a commercial blend of 12N–1.8P–6.6K (Blueberry Special; Seminole Marico, Ocala, FL); and 2) a 12N–5.2P–9.9K, which was blended by supplementing the 12N–1.8P–6.6K fertilizer with additional potassium sulfate and triple super phosphate to achieve a 12N–5.2P–9.9K analysis. The nitrogen was derived from 9.0% ammoniacal N, 0.04% water-soluble organic N, 1.1% urea, and 1.5% water-insoluble organic N. Initial fertilizer rates were 3.5 g, 7.0 g, and 10.5 g of fertilizer per plant applied at 2-week intervals beginning in April 1999 and ending in Oct. 1999 (16 applications). Plants were repotted to 56-cm diameter 95-L containers in Dec. 1999. Fertilizer rates were increased by 50% (16 applications of 5.2 g, 10.5 g, and 15.8 g, respectively) for the second and third growing seasons. Total annual N applied per plant was 6.7 g, 13.4 g, and 20.2 g in 1999 and 10.5 g, 20.1 g, and 30.0 g in 2000 and 2001. Plants were irrigated with 3.4 L of water per day from October through April and with 5.1 L/day during May through September using microirrigation emitters (Roberts, San Marcos, CA). Plant growth and fruit yield are reported for the second and third growing seasons.

Canopy volumes were determined before and after harvest during both years by measuring plant height and plant width parallel and perpendicular to the row. Plants were pruned in June 2000 after fruit harvest. Plant canopies were harvested at the end of the experiment in June 2001 and partitioned into primary canes, lower-order canes, and leaves. All tissues were dried at 70 °C to a constant weight and weighed.

Leaf retention was determined by weekly observations from December to February of each year. A subjective rating scale was used in which 10 = complete leaf retention and 1 = 10% leaf retention. Leaf analyses for N, P, and K concentrations were conducted in Aug. 2000. Mature leaves located ≈10 to 20 cm from shoot terminals were collected and dried for 5 d at 50 °C and ground. Percent nitrogen was determined by total Kjeldahl nitrogen (TKN), and percent phosphorus and potassium were determined by inductively-coupled argon plasma atomic emission spectroscopy.

Flower bud density was determined by counting the number of flower buds on the distal 13 cm of selected shoots in Dec. 2000 and 2001. Fruits were harvested and weighed at ≈3-d intervals from March until May in 2000 and from April until June in 2001. Data were analyzed by analysis of variance and mean separations were conducted using Duncan's multiple range test (SAS Institute, Cary, NC).

Significant linear relationships were usually found between fertilizer rate and leaf retention for both cultivars with greater leaf retention occurring at higher fertilizer rates (Table 1). ‘Misty’ tended to retain leaves longer into the winter than ‘Star’, especially during the 2000 to 2001 winter when over 80% of ‘Misty’ leaves were present during Feb. 2001 compared with only 16% to 30% of ‘Star’ leaves.

Effect of fertilizer rate percentage of leaves retained through the winter months.

In all cases, fruit yield followed trends that were similar to canopy volume and canopy dry weight. For ‘Star’, no fertilizer rate effects were observed for these response variables during the first year. However, during 2001, fruit yield, canopy volume, and canopy dry weight increased linearly as fertilizer rate increased. These responses, and leaf analysis, suggest that the highest fertilizer rate did not exceed what was needed for maximum yield of ‘Star’ under these conditions. In this study, fruit yields of containerized ‘Star’ plants were similar to what would be expected from plants of the same age grown in field pine bark culture. In 2000, canopy size and fruit yield were similar for both cultivars. However, by 2001, growth and yield were less for ‘Misty’ than for ‘Star’. Contrary to ‘Star’, ‘Misty’ growth and yield were greatest for the medium fertilizer rate. In this case, the highest fertilizer rate resulted in reduced canopy size and weight and reduced fruit yield. Reduced plant size and fruit yield from the highest fertilizer rate appeared to be related to a high incidence of blueberry stem blight, which only occurred in that treatment. Blueberry stem blight is often a stress-induced disease and ‘Misty’ is highly susceptible to this disease (Williamson and Lyrene, 2004a). Excessive fruit set is a common cause of blueberry stem blight in ‘Misty’. During 2001, ‘Misty’ plants that were affected by stem blight also had the highest flower bud densities. Flower bud density of ‘Misty’ was increased by ≈20% for the high fertilizer treatment compared with the medium treatment and by ≈50% over the low fertilizer rate. However, these differences were not reflected in fruit yield because stem blight killed fruiting canes during the fruit development period thereby lowering fruit yield.

Fertilizer requirements for young SHB plants grown in a containerized pine bark system appear to be similar to fertilizer requirements in soil-based production systems where maximum growth of young plants is desired (Krewer and NeSmith, 2006). Large increases in growth and fruit yield were observed for both cultivars as fertilizer rates increased from low to medium. However, optimum fertilizer rates for young SHB blueberry appear to be cultivar specific. Plant growth and fruit yield for ‘Star’, but not ‘Misty’, increased linearly upon the highest fertilizer rate tested (30.0 g N/plant per yr). Other factors such as fruit quality and disease susceptibility may be impacted differently among cultivars by fertilizer rate. Fruit quality characteristics were not measured in this study, but the incidence of blueberry stem blight was high for ‘Misty’ but not for ‘Star’ in the high fertilizer treatment. Although more work is needed to clarify fertilizer requirements for container-grown SHB blueberry under a variety of conditions and cultural practices this study suggests that total annual fertilizer demand may be similar to that reported for soil based systems. 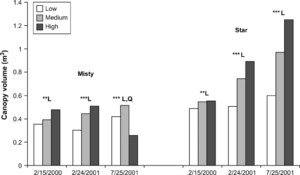 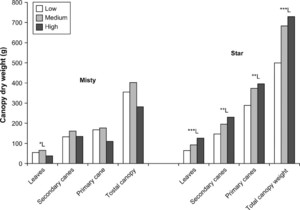 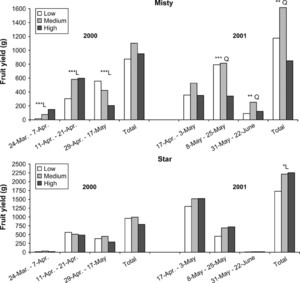