‘Winters’ Almond: An Early-blooming, Productive, and High-quality Pollenizer for ‘Nonpareil’

‘Winters’ is a new almond [Prunus dulcis Miller (D.A. Webb)] cultivar from the breeding program of the University of California at Davis, Davis, CA. When used as a pollenizer for the normally self-incompatible almond, ‘Winters’ is fully crosscompatible with all currently planted California almond cultivars, including the heavily planted cultivar ‘Nonpareil’. ‘Winters’ shows very good bloom overlap with the economically important early ‘Nonpareil’ bloom. Trees have an upright and open architecture, which produce high yields of good-quality kernels suitable for either fresh market or processing. The name ‘Winters’ refers to the town of Winters, CA, which is the site of the University of California Wolfskill Experimental Orchards where the ‘Winters’ cultivar was initially tested.

The original seedling was derived from a cross between breeding selections 3-1 and 6-27 and was originally evaluated as seedling 13-1 (Fig. 1). The seedling's lineage includes the heavily planted California cultivar ‘Nonpareil’ and the very early flowering but low market-quality cultivars ‘Peerless’ (S1S6), ‘Harpareil’ (S7S14), ‘Harriot’ (S6S14), and ‘Jordanolo’ (S7S14). Based on promising tree and kernel qualities, seedling 13-1 was selected for regional testing as an early flowering pollenizer for ‘Nonpareil’. All California almond cultivars are self-sterile, requiring crosscompatible pollenizer cultivars for successful seed set. As a result of its high market quality, ‘Nonpareil’ currently comprises ≈40% of the 600,000 acres planted of almonds in California (Almond Board of California, 2006). The remaining cultivars are mainly planted as pollenizers for ‘Nonpareil’ with ≈90% typically flowering after ‘Nonpareil’ and thus overlapping the later bloom. Almond flower fecundity is higher in the early bloom, resulting in early pollenizers having greater economic importance (Asai et al., 1996; Micke et al., 1997). Most early-flowering pollenizers, however, show inconsistent bloom overlap with ‘Nonpareil’ and a consequent lower productivity for both cultivars. Flowering time in almond is determined by the accumulation of sufficient chilling units to overcome flower bud dormancy followed by the accumulation of sufficient heat units for bud development to flowering (Tabuenca et al., 1972). Requirements for both chilling and heat units differ among individual cultivars resulting in inconsistent year-to-year bloom overlap. Currently, the only method to accurately evaluate bloom overlap is long-term field evaluations at sites representative of commercial plantings. Seedling 13-1 along with other breeding selections and cultivar standards was evaluated from 1996 to 2005 in replicated blocks planted in 1993 in Butte and Solano County in northern and southern Sacramento Valley, respectively, and in Stanislaus and Kern County in northern and southern San Joaquin Valley, respectively. Data were collected yearly on bloom and harvest period, pollen crosscompatibility, nut yield and quality, and disease and insect damage. Data from northern California evaluation sites, which have the most variable weather patterns (see Micke et al., 1997), are presented in Table 1. A number of smaller grower plantings at additional sites were also used to verify regional findings. Over the 10 years of regional evaluation, selection 13-1 demonstrated both full pollen crosscompatibility as well as consistent bloom overlap with the early ‘Nonpareil’ bloom. These properties, combined with its high productivity and good market quality, resulted in the decision to release selection 13-1 as the patented cultivar ‘Winters’.

Kernel trait means for Winters relative to Nonpareil and the widely planted early flowering cultivars Sonora and Rosetta from field data collected from 1996 to 2005 at Northern California Evaluation Trials.z

The ‘Winters’ tree is upright and vigorous (Fig. 2). Production occurs on a combination of spurs and terminal shoots, including characteristic lateral dard-type shoots ranging from 5 to 20 cm in length (Fig. 2, inset). This bearing habit results in high productivity with an open tree architecture, which allows greater light penetration and air circulation to the canopy interior. Flowers are numerous and produce abundant pollen. Flower petals are large and white with slightly scalloped margins and develop a characteristic reddening at the petal base as bloom progresses (Fig. 3). Both S-alleles, which determine self- and crosscompatibility in almond, are different in ‘Winters’ (S1S14) compared with ‘Nonpareil’ (S7S8) making ‘Winters’ one of the few California cultivars that is fully crosscompatible with ‘Nonpareil’ as well as one of the few California cultivars showing intermediate levels of self-compatibility (Barckley et al., 2006). Self-incompatibility in almond is variable with most commercial cultivars setting less than 10% of self-pollinated flowers and so is considered self-incompatible (Gradziel and Kester, 1997; Weinbaum et al., 1989). Self-compatible cultivars need to set greater than 20% set after self-pollination to be considered commercially useful (Gradziel and Kester, 1997; López et al., 2006). In a small number of cultivars such as ‘Winters’, the selfing percentage is between 10% and 20%, which although too low to be considered self-compatible, does confer greater crop stability where insect crosspollination is limiting. Although improved pollination efficiency is highly desirable, the breeding of fully self-compatible cultivars requires a difficult introgression of genes from related species, although recent progress has been reported in Europe (López et al., 2006) and North America (Gradziel and Kester, 1997). Nuts and kernels of ‘Winters’ are also similar to ‘Nonpareil’ in shape and in the moderately sealed paper shell. ‘Winters’ produced a smaller kernel than ‘Nonpareil’ (Table 1) with a darker seedcoat color, which discourages cultivar mixing. Harvest of ‘Winters’ is 3 to 4 weeks after ‘Nonpareil’ and so does not interfere with this and other early to midseason cultivars.

‘Winters’ consistently showed good overlap with early ‘Nonpareil’ bloom in all years and sites evaluated, including the north Sacramento Valley where the more variable winter and spring temperatures frequently result in erratic bloom patterns (Fig. 4). The combination of open tree architecture, high flower density, good bloom overlap with ‘Nonpareil’, and partial self-compatibility has resulted in consistently high productivity over the 10 years of evaluation where pests and diseases have been controlled by standard commercial methods (Table 1). ‘Winters’ has shown complete freedom from Noninfectious Bud-failure syndrome, which has plagued ‘Nonpareil’ and many of its pollenizers, but is susceptible to the recently emerging, regional diseases anthracnose (Colletotrichum acutatum Simmonds) and Alternaria leaf spot (Alternaria spp.). The relatively late harvest and moderate shell-seal of ‘Winters’ make kernels more susceptible than ‘Nonpareil’ to damage by navel orangeworm (Amyelois transitella Walker). The kernel/(kernel plus shell) “crack-out” proportion of ≈0.6, although lower than ‘Nonpareil’ (Table 1), is still within the desired range for California cultivars. The incidence of undesirable kernel types, particularly double kernels and kernels having multiple embryos, was low, similar to ‘Nonpareil’. The development of creases or folding of the kernel seedcoat, which is undesirable in fresh market as well as blanched kernels, is very low in ‘Winters’ relative to ‘Nonpareil’ and other cultivars tested. Both in-shell nuts and raw or processed kernels have been well received by the California industry where the nut is classified as either a ‘Carmel’ or ‘California’ marketing type.

Bloom progression of ‘Winters’ relative to ‘Nonpareil’ and the widely planted early flowering cultivars ‘Sonora’ and ‘Rosetta’ from 2001 to 2005 at the North Sacramento Valley evaluation site. 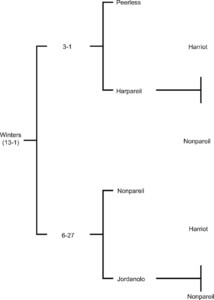 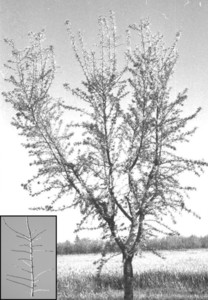 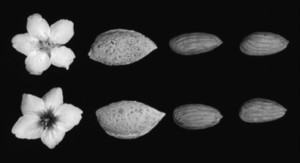 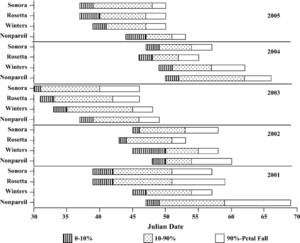