Linear regression of rain-induced versus laboratory-induced splitting incidence for 18 blueberry cultivars in 2003 (n = 100). 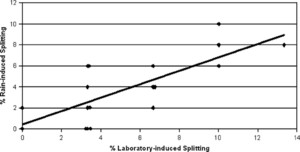