Search for other papers by Paul G. Johnson in
ASHS
Google Scholar
PubMedClose

As water resources in many areas, but particularly the western United States, become more limiting and are sought by competing interests, there is a need for turfgrass species that require less irrigation for low-maintenance situations (Feldhake et al., 1983). The need to identify new lower water-requiring turfgrass species has resulted in the characterization of many perennial grass species for turfgrass potential (Diesburg et al., 1997), including crested wheatgrass [Agropyron cristatum (L.) Gaertn.]. Crested wheatgrass is a perennial Triticeae grass species, is well suited to harsh semiarid conditions, and is a key species for revegetation and forage production on rangelands of the Great Plains and intermountain regions of the United States (Asay and Jensen, 1996). Several studies have investigated the potential (Bushman et al., 2007; Diesburg et al., 1997; Hanks et al., 2006; Robins et al., 2006) and breeding (Asay et al., 1999; Hanks et al., 2005) of crested wheatgrass for turf. ‘RoadCrest’ was the first crested wheatgrass cultivar specifically developed for turf use (Asay et al., 1999), although other cultivars such as ‘Ephraim’ (Stevens et al., 1983) and ‘Fairway’ (Kirk, 1932) are commonly used in roadside stabilization and other low-maintenance turf situations. Breeding efforts are ongoing for further crested wheatgrass turf improvements.

A potential roadblock to higher public acceptance of crested wheatgrass turf is its poorer performance for turf characteristics such as color, quality, and increased tendency for summer dormancy when compared with traditional turf species (Bushman et al., 2007; Robins et al., 2006). Turf quality is a particularly important trait and consists of the combination of color intensity, leaf texture, and tiller density (Gibeault et al., 1989; Skogley and Sawyer, 1992) and can be affected by pest resistance. Hanks et al. (2005) identified the rapid spring growth and reduced summer turf quality as the most limiting characteristics of crested wheatgrass for turfgrass. However, the study also identified high levels of broad-sense heritability for turf quality and suggested that breeding efforts aimed at increasing crested wheatgrass turf quality would be successful (Hanks et al., 2005). Although high broad-sense heritabilities suggest the importance of genetic as compared with environmental factors (Holland et al., 2003; Nyquist, 1991), they are not indicative of the potential that can be made in a breeding program.

The objective of this study was the estimation of genetic variation and narrow-sense heritability for turf quality in a population of half-sib families. These families represent breeding materials used in ongoing efforts at improving turf-quality traits in crested wheatgrass for low-maintenance turfgrass conditions.

The study location was the Utah Agricultural Experiment Station Evans Farm in Millville, UT (41°45′N, 111°8′W; 1350 m above sea level; Nibley silty clay loam [fine, mixed, mesic Aquic Argiustolls]). The experimental design was a randomized complete block design with four complete blocks. Transplanting of the control cultivars and half-sib families occurred in Apr. 1999. Individual plots consisted of 10 plants. Spacings were 1 m between rows and 0.5 m between plants within a row. Although sward plots would have been preferable to space-planted plots for the evaluation of turf quality, the polycross used to derive the half-sib families did not result in sufficient seed production for a sward plot study. Thus, seed limitations required the utilization of space-planted plots. Space-planted plots have been used previously to characterize turf quality (Hanks et al., 2005).

Using the MIXED (Littell et al., 1996) and IML procedures of SAS (SAS Institute, 2006), variance components and heritabilities with their standard errors were computed with control genotypes removed from the analysis (Holland et al., 2003) based on a split-plot-in-time modification of the randomized complete block design with four complete blocks. The model used was appropriate for the analysis of genetic variation and heritability in a set of half-sib families (Nguyen and Sleper, 1983) based on entry means and was as follows: 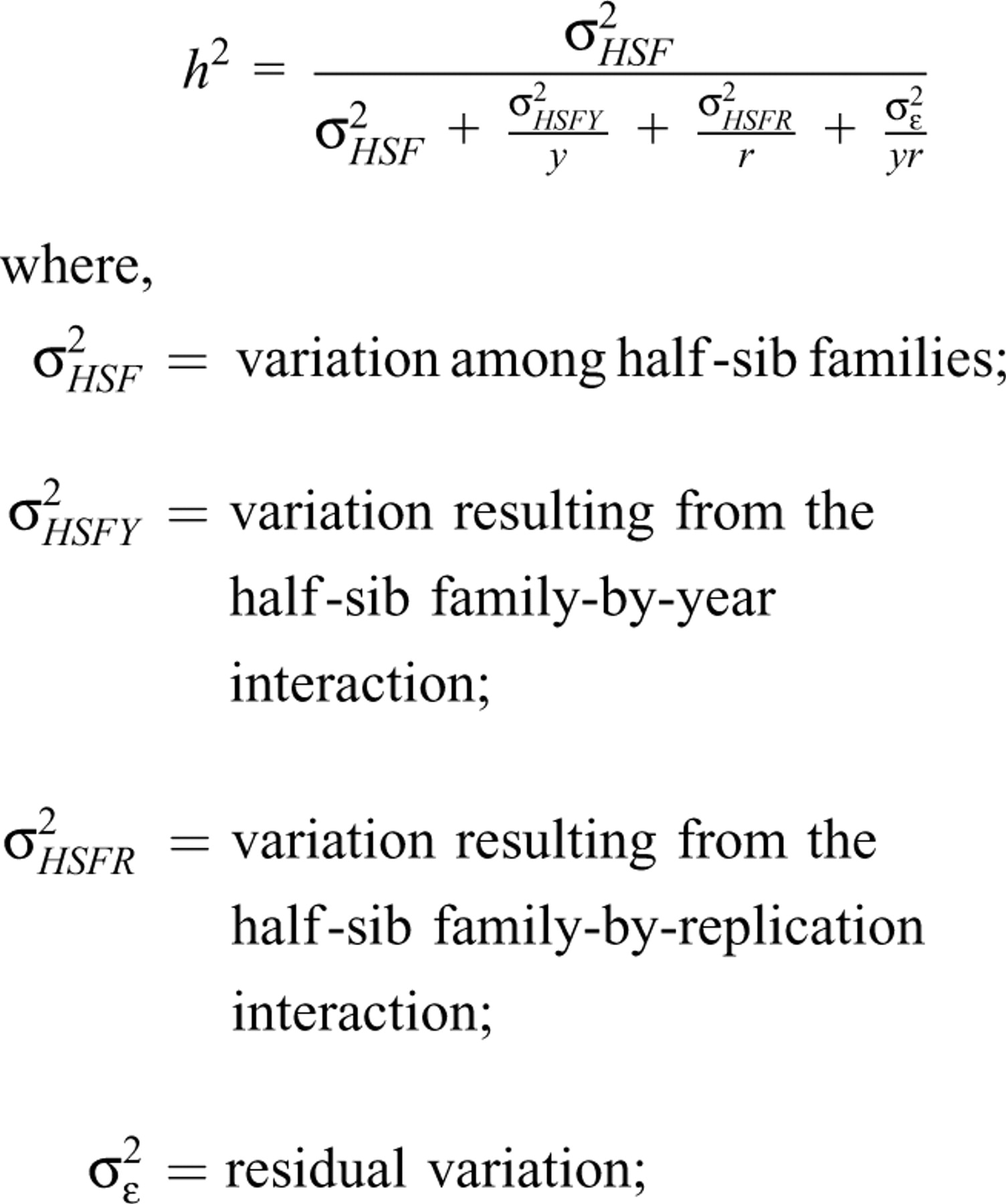 and y and r were the number of years and replications, respectively.

To compare the performance of the half-sib families with that of the control cultivars, a second model was used to calculate mean scores for each entry. This model considered genotypes (half-sib families and cultivars), years, and the genotype-by-year interaction to be fixed effects and block effects and interactions to be random. Genotypic correlations (with corresponding standard errors) between the monthly turf quality scores were also calculated using the MIXED and IML procedures of SAS and with the control cultivars removed from the analysis (Holland, 2006).

Although the main effect resulting from year was generally a significant term in the model, the half-sib family-by-year interaction only differed from zero during the late July rating period (Table 1) and in that instance was roughly three times smaller than the corresponding half-sib family variation estimate. Thus, genotype-by-environment (half-sib family-by-year) interaction was negligible or nonexistent in this study, and all further discussion and conclusions are based on data combined across years. Additionally, there was no indication that pest damage played a role in the characterization of turf quality and, thus, is not further discussed.

The high turf quality heritability estimates suggested that turf quality, at least in this population of half-sib families under the conditions of this study, was under very strong genetic as opposed to environmental control. Thus, selection for improved crested wheatgrass turf quality in this population of half-sib families should be successful. However, testing at additional locations is necessary before genotype-by-environment interaction can be completely disregarded. 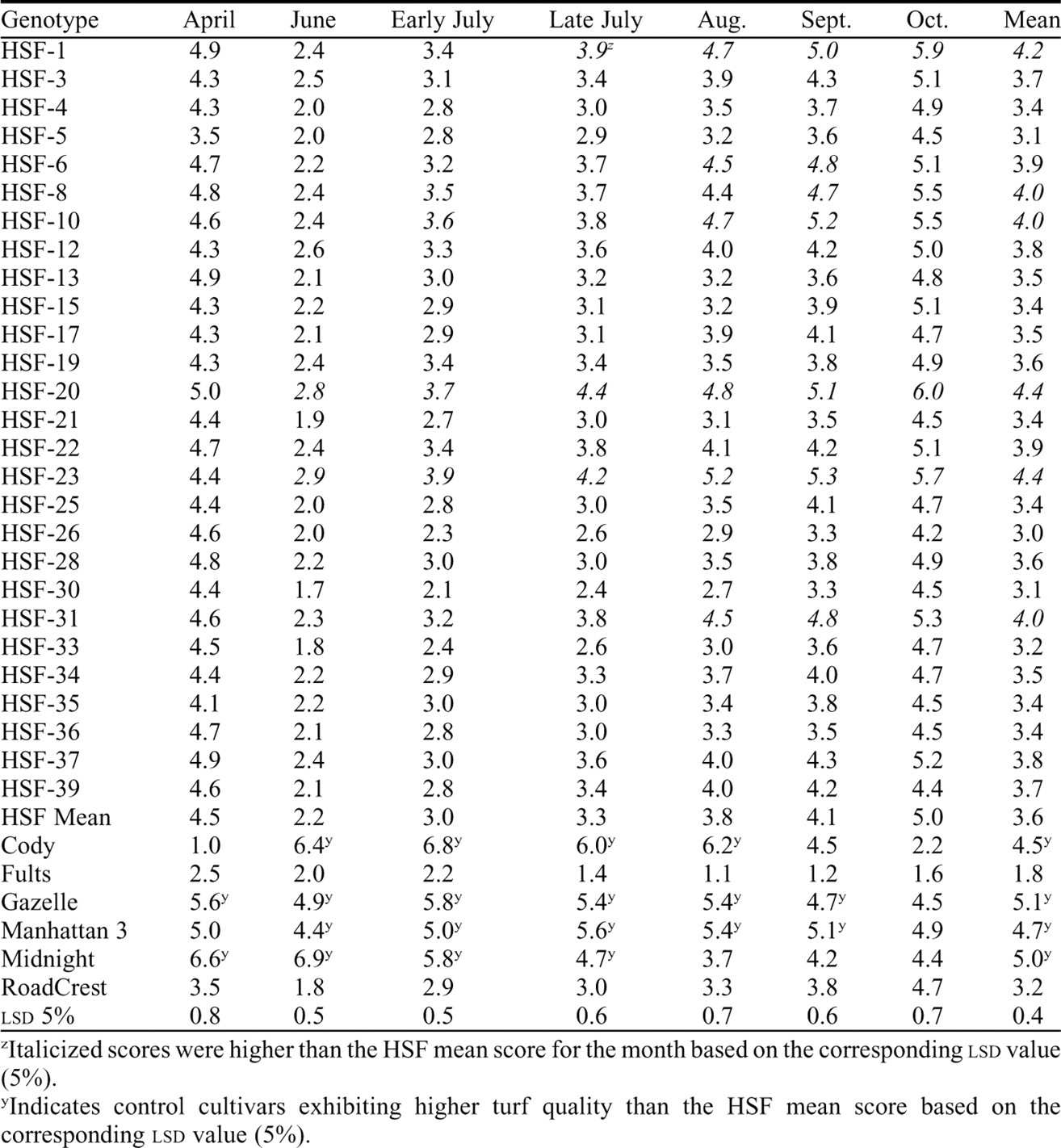 Based on the assumption of an acceptable turf quality being 5 or greater, the best half-sib families would have acceptable, or close to acceptable, quality only in April and then from August to October. Thus, it is unlikely that crested wheatgrass, at least at this point, would be a viable option for replacing common turf species in most typical turf situations, including home lawns, athletic fields, and so on. This is particularly true when considering the excellent performance of the buffalograss entry throughout the months of the study (Table 2). Buffalograss is considered a strong candidate as a lower water-requiring turf for many areas of the United States, including the intermountain region (Johnson, 2000; Shearman et al., 2004). Although ‘Cody’ buffalograss had poor performance during the months of April and October, it had very high, and often the best, performance during the other months. However, in very water-limited situations or for individuals desiring lower-water requiring turfs, crested wheatgrass might be a good option, but the most likely impact of crested wheatgrass as a turf will remain in low-maintenance areas such as roadsides, runways, and conservation areas (Feldhake et al., 1983). Other possibilities might include golf course roughs, nature parks, and other similar areas in the intermountain United States.

Even for truly low-maintenance situations, plant material with high turf quality is desirable. Based on the previously mentioned heritabilities, there was strong evidence that turf quality could be improved in this population (Table 1). However, the question remained how to best select for the improvement of turf quality in crested wheatgrass, i.e., how can quality best be improved across the growing season and at what point in the growing season should selection occur? To answer these questions, the study investigated the relationship among the monthly turf quality scores using genotypic correlations. If genotypic correlations were sufficiently high among the monthly turf quality scores, then the likelihood of success of a selection program based on a single, or a few, time points rather than the entire growing season would be substantially improved.

Genotypic correlations indicate the extent that the underlying genetics influencing each of the traits are the same (Falconer and Mackay, 1996). In this study, with the exception of April, likely as a result of April's nonsignificant estimation of genetic variation, genotypic correlations between monthly and overall mean scores were very high (data not shown) with the smallest estimate being 0.95 between early and late July. Therefore, it was apparent that the genetics underlying turf quality in this crested wheatgrass population had a very high level of commonality from month to month. The high genotypic correlations among each of the monthly scores and among the monthly scores and the overall mean scores suggested that selection during any of the months, except April, would result in improved turf quality during each of the months and for the overall turf quality across the entire summer. Thus, selection for improved crested wheatgrass turf quality could take place during any of the months of the growing season.