To address issues of invasiveness with some Buddleja L. species, a triploid Buddleja was released. Buddleja (Scrophulariaceae Juss., formally Buddlejaceae K. Wilhelm and Loganiaceae R. Brown), commonly called butterfly bush, is a recent addition to invasive plant lists in the United States but has been on invasive lists in other countries for a longer period of time (Crawley, 1987; Oregon Department of Agriculture, 2006; Staples et al., 2000). Buddleja davidii Franch., the most commonly used species in landscape plantings, is singled out on these lists because of its ability to grow in most environments, outcompete native plants, and to produce hundreds to thousands, and even millions, of seeds per year. The seeds that dehisce from capsules are small, lightweight, and typically winged, allowing them to disseminate freely. Reducing invasive potential of Buddleja will enable its continued use in the managed landscape. The hybrid ‘Asian Moon’ should be evaluated in areas where invasiveness of Buddleja davidii is a concern.

As part of a larger crossing study between diploid species (2n = 2x = 38) and tetraploid species (2n = 4x = 76), controlled pollinations in the greenhouse were made on 10 May 2001 between the tetraploid B. davidii var. nanhoensis (Chitt.) Rehd. ‘Moonshadow’ (the female parent) and the diploid B. asiatica Lour. (the male parent) (Burkett, 2001). A similar cross B. davidii × B. asiatica named B. ×hybrida Fahrquar was reported by Rehder (1947) and later by Moore (1949) without indications of its fertility status. Numerous flowers were emasculated before anthesis using tweezers, and pollination occurred once a day for 3 d after emasculation. Capsules were collected as they matured and began to dehisce. Seeds were sown on 17 Aug. 2001 in pots using a 1:1 ratio of Fafard #2 (Portland, OR) mix and perlite that had been autoclaved and pretreated with boiling water. Pots were placed in a Park Seed Biodome (Greenwood, SC) until the seeds germinated. Only one viable seedling was obtained from this cross, which was planted in the field at the University of Arkansas Research Farm, Fayetteville, in 2002. The single progeny was evaluated on morphological measurements, including corolla length and width, and calyx length (Table 1) along with flower color and fruit/seed production. This progeny has been tested as Buddleja 01-27-588. The name proposed for this selection is ‘Asian Moon’ because it resulted from a cross between B. davidii var. nanhoensis ‘Moonshadow’ and B. asiatica.

Flower measurements in millimeters of parents and single F1 progeny.z

Buddleja ‘Asian Moon’ has a symmetrical, round, shrub-like growth habit (Fig. 1). After 5 years of growth, the original plant has obtained a height of 2.2 m with a spread of 2.7 m. Mature leaves of ‘Asian Moon’ are lanceolate to elliptic in shape with an acuminate leaf tip and an acute leaf base. Leaf margins are serrate. The adaxial surface of the leaf was dark green in color (RHS 137A), whereas the abaxial surface was gray–green (RHS 194C). Color was assessed by observation using the Royal Horticultural Society (RHS) Color Charts (Royal Horticultural Society, 1966).

Flowering on ‘Asian Moon’ began in late May or early June and the flowers were borne on numerous panicles found at the tips of the new growth. Flower color was light purple (RHS 88D), but color did vary depending on ambient temperature; cooler weather resulted in darker flowers (Fig. 2). After flowering, only vestigial fruit, with no viable seed, were produced by this plant (Fig. 3).

Although many of the morphological characteristics of the single F1 plant resemble the female parent, B. davidii var. nanhoensis ‘Moonshadow’, there are several features that allow separation of the two plants. The leaves of ‘Moonshadow’ are linear to elliptic in shape, shorter, and narrower than the leaves of ‘Asian Moon’. The upper leaf color is a darker green (RHS 139A) compared with ‘Asian Moon’ (RHS 137A). Flower color on ‘Moonshadow’ (RHS 88A) was slightly darker than ‘Asian Moon’ (RHS 88D). However, flower color of ‘Moonshadow’ also varies as a result of ambient temperature. Finally, comparison of capsule development as well as chromosome counts can be used to separate the two closely related butterfly bush cultivars.

To confirm that this selection was a triploid, chromosome counts were made according to the protocol outlined by McClintock (1929). Chromosome root-tip counts indicated that the progeny from the cross was indeed triploid (Renfro, 2004) (Fig. 4).

Propagules of ‘Asian Moon’ had been grown successfully in Arkansas (Fayetteville, Little Rock, and Hope) and Pennsylvania (Kennett Square). It appears to have reliable cold hardiness from U.S. Dept. of Agriculture Zone 6b to USDA Zone 8. ‘Asian Moon’ tolerated dry soils as it was evaluated in a nonirrigated plot in Fayetteville, but grew best on moist, well-drained sites. This selection grows best in full sun conditions, a general characteristic of Buddleja. Under optimal conditions, it should be expected to grow 1 m (3.3 ft) a year.

This particular plant has shown outstanding and consistent blooming qualities wherever it has been grown. Its whitish purple color is equivalent to that of commercially available cultivars. This cultivar could be used as a substitute in areas where B. davidii is considered invasive as a result of the production of vestigial capsules lacking viable seed. It has the typical elongated panicle with multiple flowers common among B. davidii var. nanhoensis. However, inflorescences are smaller in size than those produced on B. davidii cultivars.

Propagation of this cultivar can be achieved with a high rate of success from softwood cuttings taken in the spring or summer, dipped in 1000 ppm K-IBA, and placed under intermittent mist in perlite or other similar medium. Rooting usually takes less than 2 weeks.

‘Asian Moon’ is being distributed to nurseries. A list of commercial sources or rooted stem cuttings can be obtained by contacting Dr. Jon Lindstrom, Department of Horticulture, University of Arkansas, Fayetteville.

An inflorescence from ‘Asian Moon’.

Chromosome count of 57 indicating hybrid nature as expected from crossing a tetraploid with a diploid species. Picture taken with a Nikon microscope (Nikon, Melleville, NY) with a Nikon N2000 front-mount camera using ×1000 magnification. 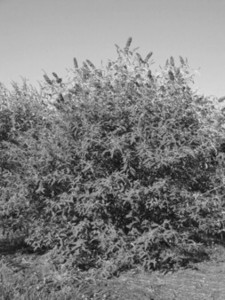 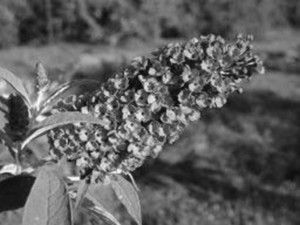 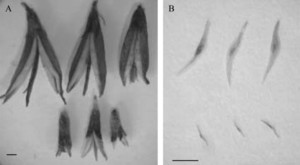 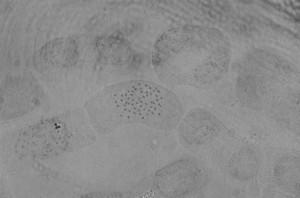