The aim of the present work was to establish appropriate conditions for the in vitro micropropagation of Eremanthus erythropappus (DC.) MacLeish through shoot multiplication on apical and nodal bud explants. Explants were excised from in vitro-grown seedlings and incubated on Murashige and Skoog medium containing different combinations of 6-benzylaminopurine (BAP) and 1-naphthalene acetic acid (NAA) (for apical buds) and gibberellic acid and NAA (for nodal segments). Proliferation of apical shoots was successfully achieved in the presence of BAP and NAA, each at 1.0 mg L−1, while the elongation of apical shoots could only be attained on medium containing NAA at 1.0 mg L−1. Elongation of nodal shoots was induced in the presence of NAA at 2.0 mg L−1. The most suitable medium for inducing root proliferation on explants of E. erythropappus was NAA at 1.0 mg L−1.

The aim of the present work was to establish appropriate conditions for the in vitro micropropagation of Eremanthus erythropappus (DC.) MacLeish through shoot multiplication on apical and nodal bud explants. Explants were excised from in vitro-grown seedlings and incubated on Murashige and Skoog medium containing different combinations of 6-benzylaminopurine (BAP) and 1-naphthalene acetic acid (NAA) (for apical buds) and gibberellic acid and NAA (for nodal segments). Proliferation of apical shoots was successfully achieved in the presence of BAP and NAA, each at 1.0 mg L−1, while the elongation of apical shoots could only be attained on medium containing NAA at 1.0 mg L−1. Elongation of nodal shoots was induced in the presence of NAA at 2.0 mg L−1. The most suitable medium for inducing root proliferation on explants of E. erythropappus was NAA at 1.0 mg L−1.

Eremanthus erythropappus (DC.) MacLeish (Asteraceae), known in Brazil by the common name candeia, is an arboreous pioneer species distributed from the northeast of Argentina to the northern and eastern regions of Paraguay and Brazil (Carvalho, 1994). The wood of E. erythropappus is physically strong (hard) and is widely employed in the manufacture of stakes, fence posts, timber supports, and boats. The oil of the plant is also of commercial importance, being rich in the sesquiterpene α-bisabolol, and has a market value in the order of USD 60/kg (Pérez, 2001). Candeia oil has anti-inflammatory properties and is also used in the production of a number of pharmaceuticals employed in dermatology for the treatment of fungal and bacterial infections. Moreover, α-bisabolol can replace azulene, a monoterpene found in Chamomilla recutita, as a fixing agent in cosmetic products.

The efficient multiplication and preservation of valuable plants such as E. erythropappus can be achieved through in vitro micropropagation. Micropropagation of wild plants, however, can be labor-intensive and time-consuming owing to the difficulties of removing microbial contamination and of avoiding extensive oxidation of the explants. To overcome such problems, it is preferable to use explants derived from seedlings grown under aseptic conditions (Mantell et al., 1994). Because no reports are available concerning the in vitro micropropagation of E. erythropappus, we have investigated the conditions required for efficient shoot multiplication on apical bud and nodal explants obtained from seedlings cultivated aseptically.

Seeds of E. erythropappus were obtained from mother plants grown in the wild and sterilized using 1% sodium hypochloride. In vitro germination was achieved by incubating the seeds on MS medium (Murashige and Skoog, 1962) solidified with agar (0.6%). The resulting seedlings were employed in all experiments.

Induction of shoots from apical buds.

Induction of shoots from nodal segments.

Nodal segments (1.5 cm long) containing two lateral buds were excised from 30-d-old seedlings and placed into MS medium prepared as described above but supplemented with combinations (in the form of a 2 × 3 matrix) of NAA (0 and 2 mg·L−1) and gibberellic acid (GA3; 0, 0.5, and 1.0 mg·L−1). Explants were incubated in the growth room for 45 d under conditions previously described, and the average length of the shoots so formed was determined. Experiments were conducted according to a randomized design, and all six combinations of PGRs were assayed in five independent determinations, each involving four replicate tubes for each matrix point.

The effects of the different treatments on shoot induction and development were analyzed by analysis of variance (ANOVA) and Tukey test: differences in mean values were considered statistically significant for values of ρ < 0.05.

Development of shoots from apical buds.

Shoot multiplication was not observed when explants containing apical buds of E. erythropappus were incubated on medium containing no PGRs or on medium supplemented with NAA alone (Fig. 1, treatments 1–3). On the other hand, the presence of BAP and NAA, each at a concentration of 1.0 mg·L−1 (Fig. 1, treatment 7), was very effective in promoting the formation of axillary shoots. The average number of shoots produced by explants incubated under these conditions was 3.9, a value that was statistically significantly greater (ρ < 0.05) than the 1.6–2.6 shoots per explant obtained with the other PGR combinations tested. In contrast, only medium supplemented with NAA was able to support the further elongation of the shoot explant (Fig. 2), a maximum average shoot elongation of 3.65 cm being recorded on medium containing 1.0 mg·L−1 NAA. Medium containing no PGRs, or combinations of NAA with BAP, produced negligible shoot growth. This result was not unexpected as auxins are known to induce shoot growth (Teixeira and Marbach, 2000).

The effect of the dominance of the apical shoot over the axillary shoots and the liberation of this dominance by BAP (Fig. 3) could be clearly observed in the studies with E. erythropappus. Moreover, root formation was inhibited at all concentrations of BAP, whilst intense rooting occurred in medium supplemented with NAA alone, particularly when the concentration was increased from 0.5 to 1.0 mg·L−1 (Fig. 3).

Development of shoots from nodal segments.

NAA at a concentration 2.0 mg L−1 was most effective in promoting the elongation of nodal shoots, with a maximum average length of 1.50 cm being recorded after 45 d in culture (Fig. 4). Shoot growth was more pronounced on medium containing no PGRs than on medium supplemented with GA3 alone; indeed, shoots incubated in the presence of 1.0 mg L−1 GA3 attained a length of only 0.40 cm, the smallest mean value obtained in the experiment. Supplementation of the medium with combinations of NAA and GA3 did not improve shoot elongation in comparison with medium containing the same concentration of NAA alone. Furthermore, root proliferation on nodal segments of E. erythropappus was most efficient in the presence of NAA at a concentration of 1.0 mg·L−1 (Fig. 5). The general micropropagation protocol employed for E. erythropappus is shown in Fig. 6.

The induction of shoot multiplication by medium containing no PGRs, or medium supplemented with NAA or BAP alone, is typically not efficient, a finding that was confirmed in the present studies with E. erythropappus. Shoot induction has, however, been achieved for various plant species, including Acacia seyal (Al-Wasel, 2000) and Santonina canescens (Casado et al., 2002), on media supplemented with both auxin and cytokinin. Although presence of BAP appears to be a common requirement for shoot formation, subsequent growth may be reduced by the presence of high concentrations of the cytokinin. In studies on the micropropagation of Spilanthes mauritiana, Bais et al. (2002) tested low concentrations of auxin (NAA in the range 0–0.04 mg·L−1) and cytokinin (BAP in the range 0–0.4 mg·L−1) in combination, and showed that shoot multiplication was maximal in the presence of NAA at 0.02 mg·L−1 and BAP at 0.2 mg·L−1.

In contrast, media containing high concentrations of BAP (2–4 mg·L−1) and low levels of NAA (0.1–0.5 mg·L−1) induced shoot formation on apical explants (6.3–6.7 shoots per explant) of A. seyal (Al-Wasel, 2000). Moreover, medium containing BAP and NAA at equal concentrations (1.0 mg·L−1) was successful in inducing shoots (5 per explant) in Maclura tinctoria (Gomes, 1999), and the same cytokinin: auxin combination was established in the present study to be optimal for shoot induction in E. erythropappus.

For some species, shoot emergence cannot be induced using combinations of BAP and NAA, and it necessary to employ cytokinin in the absence of auxin. Incubation of apical buds of E. erythropappus in the presence of BAP alone, however, caused hyperhydration of the explants.

Because the presence of BAP was essential for shoot induction in cultures of E. erythropappus, while combinations of BAP and NAA were not efficient in inducing shoot elongation, a second matrix experiment was carried out using NAA and GA3 with the aim of optimizing the development of nodal buds. However, the presence of GA3 in any concentration was apparently inhibitory to shoot growth. In accordance with this finding, GA3 was found not to be effective in inducing shoot proliferation and elongation in Myrtus communis (Scarpa et al., 2000), and the best response was obtained with medium supplemented with BAP and NAA. This result contrast with that of Figueiredo et al. (2001), who considered the addition of GA3 to be absolutely essential for the elongation of shoots of Rollinia mucosa before transfer to rooting medium. Furthermore, the combination of GA3 (0.5 mg·L−1) and BAP (0.5 mg·L−1) was effective in inducing the elongation of Agave sisalana shoots before transplantation onto rooting medium (Hazra et al., 2002).

Proliferation of apical shoots of E. erythropappus was successfully attained using MS medium supplemented with BAP and NAA at 1.0 mg·L−1 each. The presence of BAP inhibited the formation of roots but broke the apical dominance and induced the formation of multiple axillary shoots. Furthermore, elongation of apical shoots could be achieved using NAA at 1.0 mg·L−1, while elongation of nodal shoots was induced in the presence of NAA at 2.0 mg·L−1. This finding is very important for the micropropagation of E. erythropappus as the size of the explant determines its survival during the rooting stage and acclimatization (George, 1996). The most suitable medium for inducing the proliferation of roots on explants of E. erythropappus was NAA at 1.0 mg·L−1.

The results presented in this paper, together with the other examples cited, demonstrate the influence of the genotype on in vitro shoot multiplication, as well as the importance of the balance between PGRs. 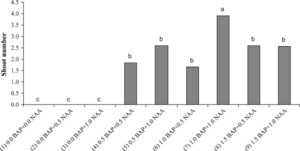 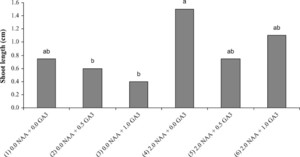 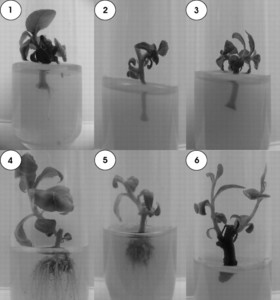 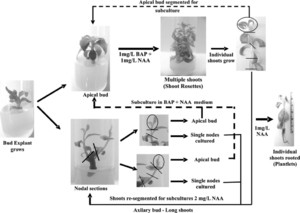