Paper birch (Betula papyrifera Marsh.) is commonly used as a landscape tree for its attractive white bark. It is native in northern North America (USDA, 2005) with a southern-most natural distribution in higher elevations between Tennessee and North Carolina. Paper birch grows best where provided with ample moisture and is adapted to a variety of soils (Farrar, 1995). Water deficit is a severe environmental stress to paper birch in the landscape and nursery production. Water-deficit stress reduced net photosynthesis both under field and greenhouse conditions (Gu et al., 2003, 2004) and was generally considered as a serious limitation to plant growth (Cinnirella et al., 2002; Ladjal et al., 2000).

The objective of this study was to explore the role of ethylene in water-deficit stress responses in paper birch. Previous research indicated paper birch had more leaf abscission than the other three birch genotypes and maintained high gas exchange levels when exposed to water deficits (unpublished data). The hypothesis in this study was that ethylene plays a role in inducing leaf abscission in paper birch exposed to water deficit.

One-year-old paper birch seedlings were obtained from Lawyer Nursery (Plains, MT) planted in 4-l pots with Sun Gro SB500 (Sun Gro Horticulture, Bellevue, WA) on 20 June 2005 and grown in a greenhouse. Ten grams of Osmocote 14N–4P–11K (Scotts, Marysville, OH) were top-dress applied to each pot at planting. Plants were trained to a single shoot. Plants were watered daily to container capacity until studies were started on 12 July 2005.

Expt. 1: Effect of 20-ppm ethylene and water deficit on leaf abscission of B. papyrifera.

Water-deficit treatment was similar to “target water potential” described by Cregg (2004). The relation between the plant and container weight (W) and predawn water potential (ψpredawn) was determined during a dry-down cycle in a preliminary experiment. Each value of W is associated with a certain level of ψpredawn.

In this study, 40% of the original W was chosen to induce water-deficit conditions (target water potential; ψpredawn ≈−1.75 MPa) in the plants. The combined weight of the container and plant was taken daily at 1900 hr (CDST). For the water-deficit treatments, plants were watered to runoff and allowed to dry until the W deceased below 40% of its original value. A requisite volume of water was applied to each container to reach 40% of its original weight daily. Well-watered plants were watered daily to container capacity.

After the combined weight of container and water-stressed plants reached 40% of their original value, predawn water potential (ψpredawn) was measured at 600 hr with PST 55-15 thermocouple psychrometers connected to a Wescor HR-33T microvoltmeter (Wescor, Logan, UT) as described by Oosterhuis and Wulleschleger (1987). One leaf disc was punched from the center of half of the leaf on each tree and enclosed in psychrometer chambers, which was emerged in a 25 °C water bath for 4 h before readings were taken.

Both well-watered and water-stressed plants were transported to the laboratory for ethylene treatment. Two groups of two well-watered plants and two water-stressed plants were put into two 69-L clear plastic boxes. The box had one septum inserted at the top. The lid of the box was sealed using laboratory tape (VWR International, West Chester, PA). Ethylene was injected into the box to reach a final concentration of 20 ppm (v/v). Ethylene concentration was verified from a 2-mL sample extracted and measured using a Hewlett-Packard 6890 gas chromatograph (GC) (Wilmington, DE) equipped with a HayeSep T column (6′ × 1/8″ × 0.085″, 80/100, S/N 98–20906; Alltech Associates, Inc., Deerfield, IL). Detection was by flame ionization detector. The oven temperature was set as 60 °C. Helium was used as carrier gas with a flow rate of 30 mL/min. Another two groups of well-watered plants and water-stressed plants were put in two additional boxes with no exogenous ethylene as a control.

After 96 h, boxes were opened and the number of abscised leaves and retained leaves was counted for each tree. Leaf abscission was expressed as a percentage of total leaves.

Expt. 2: Effect of water deficit and ethylene inhibitors on B. papyrifera.

STS solution was prepared and applied following the method of Cameron and Reid (1981). Stock solutions of 0.1 M sodium thiosulfate and 0.1 M silver nitrate were mixed with a molar ratio between silver and thiosulfate of 1:4 immediately before STS treatment. STS solution (0.1 mm) was sprayed on leaves until runoff.

The fifth most recently expanded leaf was tagged on each tree at the beginning of the experiment. Leaf gas exchange was measured from 900 hr to 1300 hr (CDST) with a CIRAS-1 (PP Systems, Haverhill, MA) infrared gas analyzer with the Parkinson's leaf cuvette. Gas exchange measurements were taken on a 2.5-cm2 section on the center of half of the tagged leaf on all dates to minimize variability resulting from leaf age and position. The microprocessor was set to maintain cuvette conditions of 360 ppm CO2, 25 °C, 50% relative humidity, and 1300 μmol·m−2·s−1 photosynthetically active radiation.

Two hours before ethylene measurements, plants were moved from the greenhouse to the laboratory and the upper six expanded leaves of each plant were enclosed in clear 1-l polyurethane bottles. A preliminary test was conducted to confirm that the bottles did not generate detectable ethylene during the experimental period. The stem directly under the sixth expanded leaf was wrapped with a black rubber stopper. The top six leaves were gently placed in the upside-down bottle before the bottle was sealed with the stopper. Four hours after sealing the bottles, gas samples were analyzed for ethylene using a GC as described in Expt. 1. Two 2-mL samples were taken from each bottle and a mean was calculated.

Expt. 3: Effect of ethylene and water deficit on B. papyrifera.

Sixteen paper birch plants of similar size were selected and randomly assigned to each of the following four treatments: 1) well-watered/control (WC); 2) water-stressed (SC); 3) well-watered + ethylene (WE); and 4) water-stressed + ethylene (SE). Water-deficit treatment was similar as described in Expt. 1. Plants to be treated with ethylene were placed in boxes as described in Expt. 1 and exposed to 1 ppm (v/v) ethylene for 4 h.

Gas exchange, ψpredawn, chlorophyll fluorescence, and ethylene production measurements were taken at 0, 1, 2, 3, 4, 5, and 12 DAT as described in Expt. 2.

All three experiments involved two factors (Expt. 1: irrigation regimes × ethylene treatments; Expt. 2: irrigation regimes × ethylene inhibitor treatments; Expt. 3: irrigation regimes × ethylene treatments) with four replications arranged in a completely randomized design. Data were analyzed using the SAS general linear model procedure (SAS Institute, Cary, NC) with Tukey-Kramer adjustment for multiple comparisons. The percentage of leaf abscission in experiment one was not subjected to arc sine transformation, because the arc sine transformation was developed for binomial proportions and the transformation is unlikely to change the conclusion noticeably unless the proportion ranges from near zero to over 30% or from below 70% to 100% (Snedecor and Cochran, 1989).

Effect of ethylene treatment and water-deficit stress on the percentage of total leaf abscised on B. papyrifera.z 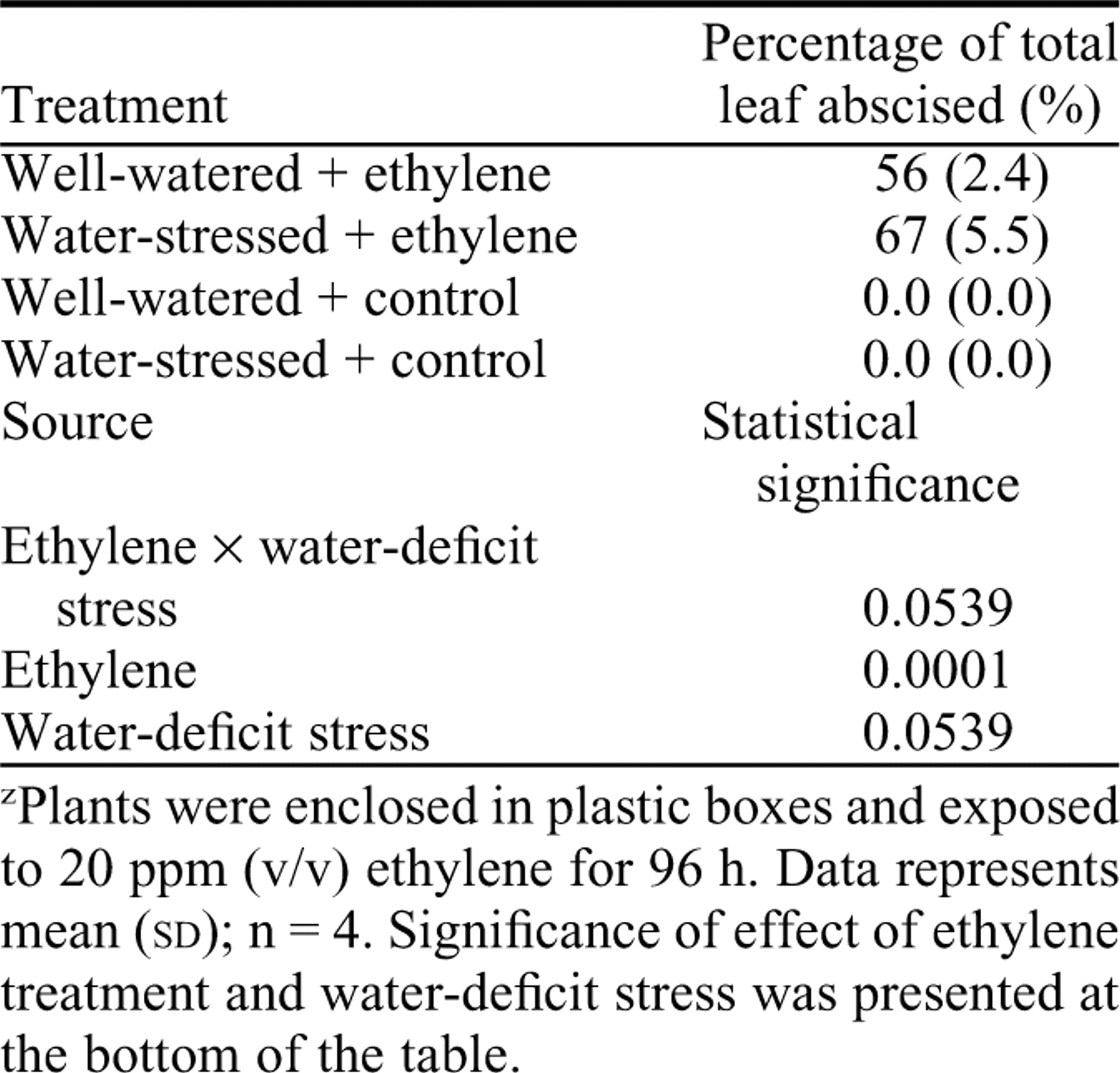 Well-watered paper birch plants, regardless of ethylene action inhibitor treatments, had ψpredawn ≈ −0.5 MPa. ψpredawn of all water-stressed plants decreased below −2.0 MPa at 13 DAT.

Inhibitors of ethylene action (1-MCP or STS) did not have a significant effect on gas exchange or chlorophyll fluorescence in well-watered or water-stressed plants, and only water-deficit treatment effect was significant on net photosynthesis, g S, F v/F m, F v′/F m′, and ΦPSII (data not shown).

The effect of ethylene on leaf abscission on birch trees has not been reported before, although Whitespire birch (Betula populifolia Marsh. ‘Whitespire’) on paper birch rootstocks had more abscised leaves than on river birch (B. nigra), European birch (B. pendula), or Whitespire birch rootstocks during spring flooding (Ranney and Bir, 1994), which could result from ethylene produced during flood stress. In the current study, paper birch abscised more than 50% of total leaves regardless of plant water status after exposure to a high concentration (20 ppm) of exogenous ethylene for 96 h (Table 1), which suggests that ethylene may be involved in leaf abscission of paper birch. Application of a physiological level (1 ppm) of ethylene, however, did not cause increased leaf abscission in either well-watered or water-stressed paper birch.

Two different inhibitors of ethylene action were used because one (Ag+) is thought to irreversibly bind to ethylene binding sites and the other (1-MCP) is thought to have a more transient binding effect unless continuously applied (Cameron and Reid, 2001). 1-MCP and STS delayed leaf abscission at 26 DAT (Fig. 2). Neither 1-MCP nor STS had an effect on plant water status, gas exchange, or chlorophyll fluorescence (data not shown). A significant increase in ethylene production was not detected in water-stressed paper birch before 26 DAT (Fig. 1). A significant increase in endogenous ethylene production was observed in water-stressed paper birch after significant leaf abscission (Fig. 1).

Based on these observations, it would appear that ethylene plays a minor role in water-deficit stress-induced leaf abscission in paper birch, although its effect could not be totally eliminated. Other hormonal factors such as abscisic acid (Fort et al., 1998) or cytokinin (Zhang and Ervin, 2004) might be worth exploring to investigate the effects on leaf abscission on paper birch under water deficit conditions. 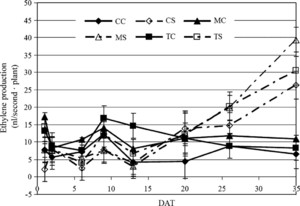 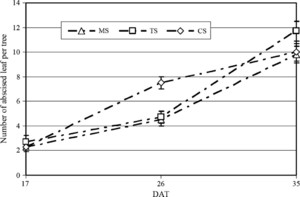