Agriculture and Agri-Food Canada (AAFC) has developed a new cultivar grouping of roses called the Canadian Artist Cultivar group (Richer and Davidson, 2004). This new series is similar to the well-known Parkland and Explorer rose Cultivar groups and demonstrates the active participation of the Canadian industry in the development of roses. The first cultivar from this new Cultivar group, ‘Félix Leclerc’, will be available in June 2007 in memory of the Canadian artist, Félix Leclerc, who was also an author, composer, singer, actor, and writer, as well as a defender of Quebec's rights. His monumental body of work, which is known in Canada as well in Europe's French-speaking communities, is tinged with integrity and his love for his country and the French language. Leclerc lived in Île d'Orléans (Quebec) and died on 9 Aug. 1988.

Rosa ‘Félix Leclerc’ was selected based on its plant growth habit, hardiness, disease resistance, flower size, flower color, and length of flowering season. Biological characteristics to distinguish this cultivar from similar rose cultivars are the double pink flowers on a climbing habit. When used as a pollen source, ‘Félix Leclerc’ may result in unique rose types, such as the ‘Quadra’ rose developed by Ogilvie and Arnold (1996).

‘Félix Leclerc’ is the product of a cross between ‘L25’ and ‘D25’ made in 1977 by Dr. Felicitas Svejda (Agriculture and Agri-Food Canada in Ottawa, Ontario, Canada; Fig. 1). The female parent, ‘L25’, originated from a cross between Rosa × kordesii and ‘D07’ and Rosa × kordesii Wulff. ‘D25’, the pollen parent, came from the ‘D07’ breeding line, which was obtained from a second open-pollinated seedling generation originating from a cross between ‘Suzanne’ and ‘Red Dawn’. Winterhardiness was derived from R. corymbifera Borkh. ‘Laxa’ and R. pimpinellifolia L., the parents of ‘Suzanne’ (Ogilvie et al., 1999) and R. ×kordesii.

Before 1987, Dr. Svejda, the breeder, conducted trials and evaluated this cultivar for several years, but due to the lack of interest from the rose industry, evaluations were discontinued because climbing roses were not marketable. After Dr. Svejda's retirement in 1987, all vegetative material was transferred to the Agriculture and Agri-Food Canada research station in L'Acadie (Quebec) and Dr. Richer conducted replicated selections and evaluation trials during 2002–2005.

‘Félix Leclerc’ is a climbing rose that grows up to 5 m. All flower color characteristics were determined using the RHS color chart (Royal Horticultural Society, 1986). The young shoots are reddish-brown in color due to low anthocyanin content. The stems have a few short thorns (<5 mm long) and 10–19 long thorns (>5 mm long), and the thorns are gray-green to yellow-green and concave in shape. The leaf upper side is dark green with moderate glossiness (137A on the RHS Color Chart), and the average measurements corresponded to 126 mm long and 79 mm wide, when fully expanded. Each leaf has five to seven leaflets measuring 29–70 mm long and 19–52 mm wide. The terminal leaflets possess a flexible texture with an obtuse-shaped base and a serrate leaf margin.

‘Félix Leclerc’ has at least two flowering periods with the possibility of three or more depending on temperature. The first flowering period occurs in mid-June for 4 weeks with an additional flowering period the end of July. Flowering may continue up to September. There is a typically moderate number of flowers per flowering shoot (4–14), and the flower pedicel has only a few thorns. The flower bud is ovoid in shape (Fig. 2A), red-purple (57A) at the opening, red-purple (57B) on the upper face, and red-purple (57D) on the lower face after opening. The sepal extensions are absent to weak. ‘Félix Leclerc’ has double flowers that are dark blue-pink (67C) and 65–117 mm in diameter (Fig. 2C). The flowers have a weak, musky fragrance. The color changes to a red-purple (66B to 68B) with age. When viewed from the side, the shape of the fully opened flower is flat on the upper part and concave to flat on the lower part. When viewed from above, the fully opened flower is irregularly rounded in shape with the flower center open. The petals are an average of 39 mm long and 35 mm wide when the flowers are fully opened. There is a very small yellow-green petal spot (3D) at the base on the outer side and a small to medium-sized yellow-green spot at the base on the inner side of the petals. The petal margins are weakly deflexed with weak to moderate undulation. The outer stamen filaments are yellow to orange (RHS Y-O 14-B).

The style is long and yellow with dense pubescence on the upper half. The stigma is positioned below the anthers. The receptacle is small, pear-shaped in cross-section, and contains no thorns. The ‘Félix Leclerc’ hips are smaller than those observed on ‘Marie Victorin’.

For the Plant Breeders' Rights Office, a trial with ‘Félix Leclerc’ was conducted at the Agriculture and Agri-Food Canada research station in L'Acadie (Quebec) in the summer of 2005. An unbalanced, completely randomized design was used with four replicates of the candidate and two replicates of the reference variety, ‘Marie Victorin’. The trial plots were 2.2 m × 4.5 m for the candidate variety and 2.5 m × 1.0 m for the reference variety. The size differences in the plots were due to growth habit (spreading). Plants were spaced 1 m apart. The flowers characteristics were based on four plant measurements for the candidate variety and two plant measurements for the reference variety, ‘Marie Victorin’ (Table 1). Also, the winterhardiness of ‘Félix Leclerc’ had been tested in 13 sites across the Canadian climatic zones 3A to 9B during 1999–2003 (McKenney et al., 2001; Ouellet and Sherk, 1967).

Differences in flower color between ‘Félix Leclerc’ and the reference variety, ‘Marie Victorin’. 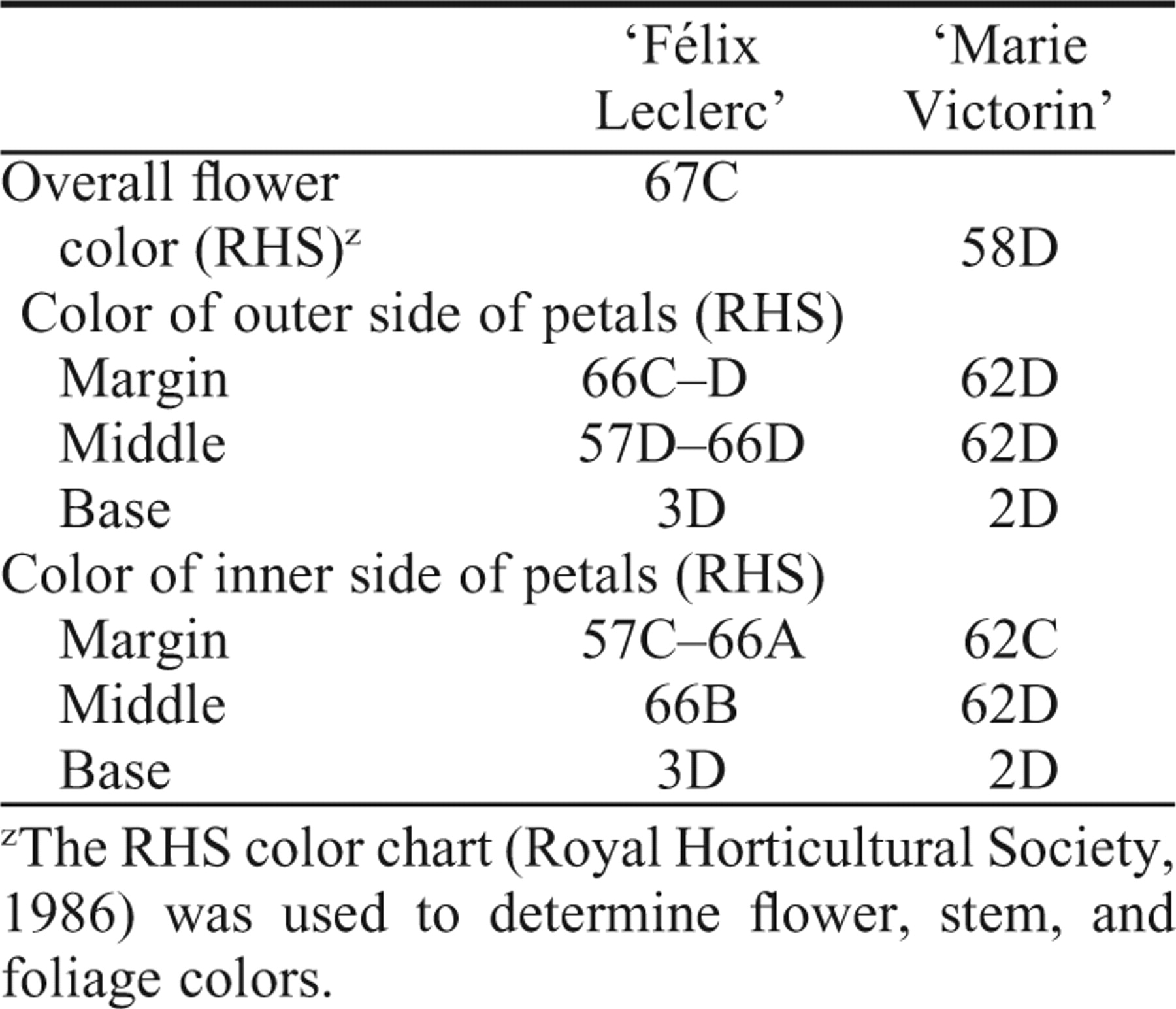 Richer et al. (1996) described three potentials for ornamental trees and shrubs. Therefore, ‘Félix Leclerc’ cultivar can survive in Canadian zone 3A with a small cover of snow or in zone 3B without winter protection. The use of this cultivar may to be marginal in zones 3A to 8B due to tip damage. The cultivar reached its full potential for ornamental character expression in zones 5B to 8B.

‘Félix Leclerc’ is easily propagated by taking softwood cuttings at the bud stage, treating them with rooting hormone (Stimroot #2, 0.4% indolebutyric acid; Plant Products, Bramalea, Ontario, Canada), and placing them under intermittent mist for at least 3–4 weeks. ‘Félix Leclerc’ must be grown on its own roots.

Comparison between flower bud ovoid shape of (A) Rosa ‘Félix Leclerc’ and the pointed shape of (B) Rosa ‘Marie Victorin’, the reference variety. The double flowers of (C) Rosa ‘Felix Leclerc’ are dark blue-pink (67C) and measure 65–117 mm in diameter, and the double flowers of (D) Rosa ‘Marie Victorin’ are pale peach (56A) fading to pink at the blossom stage (56D) and measure 70–84 mm in diameter. 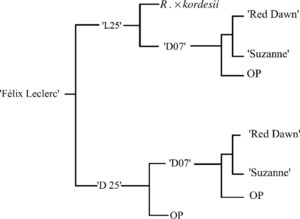 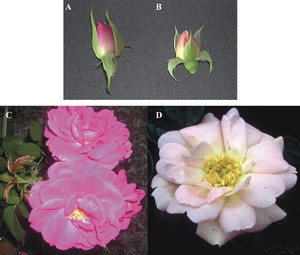