Germination of Phlox pilosa L. Seeds Is Improved by Gibberellic Acid and Light but Not Stratification, Potassium Nitrate, or Surface Disinfestation

The genus Phlox consists of ≈60 species native to North America (Steffey, 1987; Wherry, 1955). The “Phlox pilosa complex,” a taxonomic grouping considered to be a natural phyletic unit, consists of four species: P. pilosa, P. divaricata, P. amoena, and P. floridana (Levin, 1966; Wherry, 1955). The perennial species Phlox pilosa (also known as Prairie Phlox or Downy Phlox) consists of several subspecies (Levin, 1966). All species in the “Phlox pilosa complex” are self-incompatible, but there is a great deal of compatibility and potential for outcrossing within the complex (Levin, 1966).

Wildflowers are now widely used in residential and commercial landscaping, habitat restoration, and highway beautification projects (Milstein, 2005). Phlox pilosa is potentially useful in these situations. This species is found in all states from North Dakota to Texas and eastward into Florida and New York (Barkley, 1986). Germination of P. pilosa seeds is erratic (Specialty Perennials, 2006), and poor seedling emergence in its natural habitat has been reported (Christiansen, 1967). The inconsistent germination of many perennial species has long discouraged growers from starting plants from seed; however, several companies have recently begun to focus on improving germination of perennial species through seed treatments (Hamrick, 2005).

Although considerable research has been done on seed germination of the annual species P. drummondii (Carpenter et al., 1993a, 1993b, 1995), there is a paucity of scientific literature concerning germination in the perennial Phlox species. Several seed companies have published recommendations for germinating perennial Phlox seeds. For example, Prairie Moon Nursery (2004) suggests cold stratification at 33 to 38 °F (0 to 5 °C) for 2 months to break dormancy in P. pilosa seeds. Specialty Perennials (2006) recommends freezing P. pilosa seed for 2 weeks before sowing, then incubating seed trays in darkness at 70 °F (20 °C) for 3 weeks, followed by 35 °F (2 °C) for 3 weeks before moving trays back to 70 °F (20 °C). Similarly, Jelitto Staudensamen (2004) recommends prestratification of P. pilosa seeds at 18 to 22 °C in moist medium for 2 to 4 weeks, followed by cold stratification at –4 to 4 °C for 4 to 6 weeks, and a period (duration not specified) of moderate temperatures (5 to 12 °C) before exposure to warmer temperatures. Simplification of these procedures would be beneficial to commercial growers and seed producers. The Association of Official Seed Analysts (AOSA) makes recommendations for germinating P. drummondii but no other Phlox species (AOSA,1988).

In some species, cold stratification can replace a light requirement for germination (Bewley and Black, 1994). Recent studies have revealed that cold stratification has a direct effect on production of gibberellins (GAs) in seeds of Arabidopsis thaliana (Yamaguchi and Kamiya, 2000, 2002; Yamauchi et al., 2004). Exogenously applied GA3 overcomes seed dormancy in several species (Baskin and Baskin, 1998; Hartmann et al., 1997) and promotes germination in some species that normally require cold stratification, light, or after-ripening (Bewley and Black, 1994). GA promotes the production of enzymes such as endo-β-mannanase, which loosen cell walls in the endosperm, thereby reducing resistance to radicle emergence (Bewley, 1997; Groot and Karssen, 1987: Yamaguchi and Kamiya, 2002).

Pathogenic fungi, bacteria, and viruses may be found on seedcoats or within seed tissues. Seedborne fungi may cause poor germination and impair seedling development (Halmer, 2000). Certain species of Alternaria can infect seed while it is still on the mother plant and can be responsible for decreased germination (Mycock and Berjak, 1995).

The present study was conducted to determine the effects of cold stratification with prestratification, GA3, potassium nitrate, light, and surface disinfestation on the germination of Phlox pilosa seeds.

Phlox pilosa seeds were obtained from Prairie Moon Nursery (Winona, MN). Seeds were sown in 9-cm glass petri dishes on top of a single layer of blue blotter paper (Anchor Paper Company, St. Paul, MN). Except for Expts. 5 and 6, all seeds were treated one day after sowing with 3α,4,7,7α-tetrahydro-2-[(trichloromethyl) thio]-1H-isoindole-1,3(2H)-dione (captan), 50% wettable powder, formulated product at 0.24 mg/100 mL deionized water. Seeds in Expt. 5 were treated with captan on the day of sowing. Seeds in Expt. 6 were not treated with captan. Germination tests were performed in a growth chamber (model I-35LVL; Percival Scientific, Boone, IA) at 20 °C constant temperature with cool-white fluorescent lamps providing 50 ± 8 μmol·m−2·s−1 photosynthetic photon flux (PPF). The photoperiod was 12 h per 24-h cycle in all experiments. Placement of petri dishes in the incubator was completely randomized. Blotter paper was moistened as needed with deionized water.

Seeds were sown in petri dishes on blotter paper moistened with deionized water and were prestratified (constant 20 °C and 12 h of irradiance per day) in the growth chamber for 0, 2, or 4 weeks. After prestratification, seeds were cold-stratified at 5 ± 2 °C in a dark refrigerator (Precision 812; Precision Scientific, Chicago) for 0, 2.5, 5, 7.5, or 10 weeks and were then returned to the 20 °C growth chamber for a poststratification period of 21 d.

Expt. 5: Effects of light and darkness on germination responses.

Seeds were sown on blotter paper moistened with deionized water. Petri dishes were sealed with parafilm after sowing. Seeds were incubated at constant 20 °C. There were two treatments: 1) exposure to light from cool-white fluorescent lamps (50 ± 8 μmol·m−2·s−1 PPF) for 12 h daily; and 2) total darkness. petri dishes were wrapped in aluminum foil to exclude light.

Four groups of 20 seeds were used in each treatment. Seeds were treated with bleach (diluted with deionized water to 0.6% NaHClO) for 10 or 20 min. Seeds were rinsed with sterile water and aseptically sown on acidified potato dextrose agar. Sterile conditions were maintained by sowing seeds under a laminar flow hood (Edgegard, Baker Co., Sanford, ME). Control seeds were rinsed with sterile water. Petri dishes were incubated for 3 d on a laboratory bench at ambient temperature (≈18 °C). Seeds were observed 3 d after sowing for the presence of fungi. Two additional replicates of 25 seeds per treatment were used for germination studies. Glass petri dishes and blotter paper were sterilized in an autoclave (Market Forge Sterilmatic, Everett, MA) at 121 °C and 103 kPa for 15 min. Seeds were sown under a laminar flow hood and petri dishes were transferred to the growth chamber for 21-d incubation. The experiment was repeated once.

The General Linear Models, analysis of variance, and t test procedures of SAS (SAS Institute, Cary, NC) were used for data analysis. Coefficients for orthogonal polynomial comparisons were calculated using the IML procedure of SAS. Data from Expt. 5 were transformed (arcsin for G21 and square root for T50 and T90–T10) before analyses. 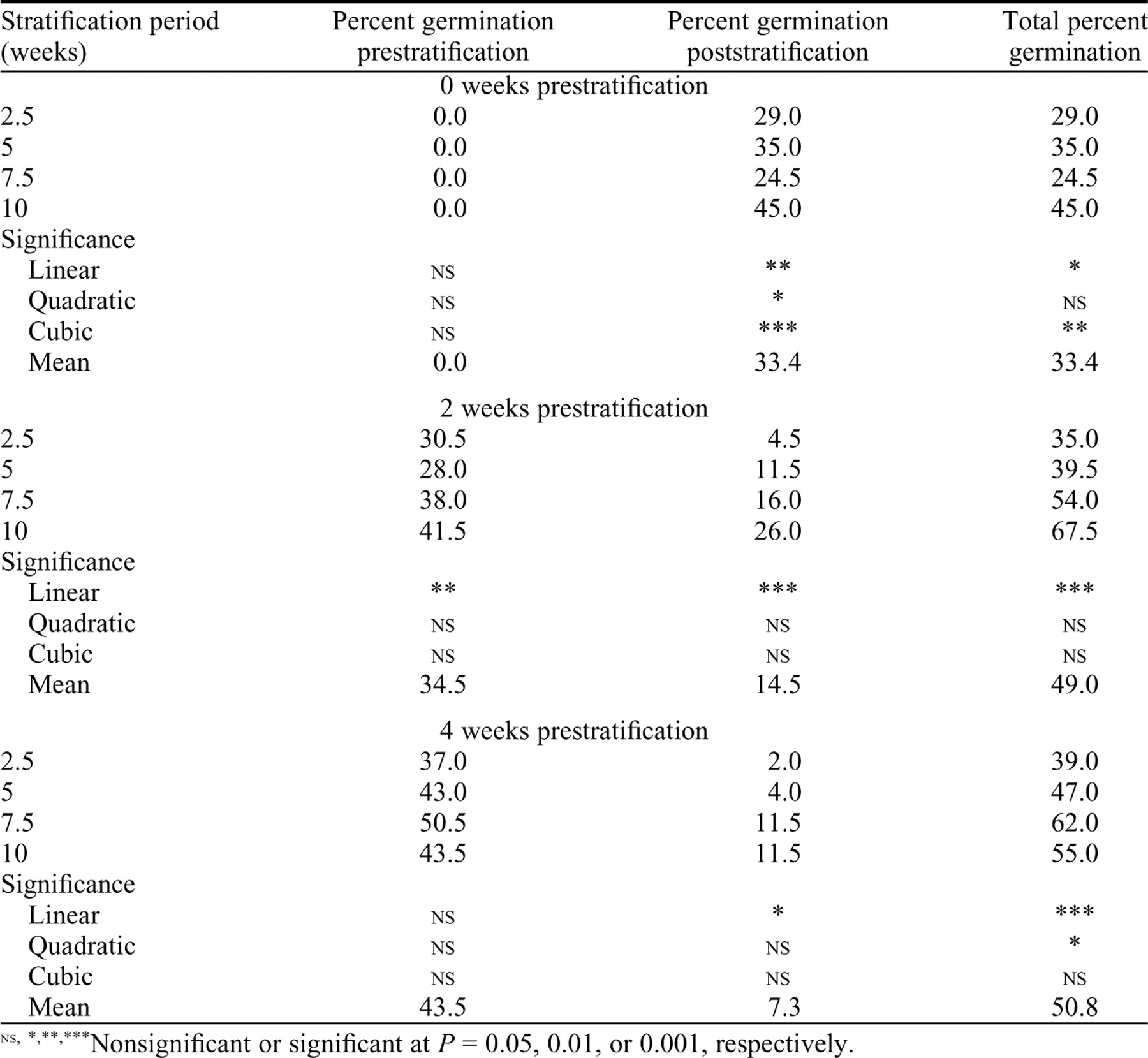 In some temperate species, dormancy is broken by a period of warm temperatures followed by cold stratification. This response is most often associated with morphophysiological dormancy (Fenner and Thompson, 2005); however, seeds with morphophysiological dormancy have underdeveloped embryos (Baskin and Baskin, 2005). Dissection of 200 P. pilosa seeds under a binocular stereoscope (Zeiss, Thornwood, NY) revealed fully developed embryos in 96% of the seeds (data not shown). Thus, it appears that the P. pilosa seeds used in this experiment vary in their level of physiological dormancy. Variation in depth of seed dormancy may be incited by environmental factors or positional effects while seeds are maturing on the mother plant. Length of day, temperature, light quality, age, and nutritional status of the parent plant, seed position in the fruit, and position of the fruit in the inflorescence have been reported to affect seed germinability (Gray and Thomas, 1982; Gutterman, 1982). Greene and Curtis (1950) observed a wide variation in germination between seed lots collected in different years. These investigators surmised that this variation involved the same factors that are affected by stratification, but do not discuss these factors further (Greene and Curtis, 1950).

Exogenously applied GA3 had a significant effect on G21, T50, and T90–T10 values. G21 values exhibited a generally positive quadratic response, whereas T50 and T90–T10 values showed positive and negative linear trends, respectively, to increasing GA3 concentrations (Table 2). Application of 10 mg·L−1 GA3 increased the G21 percentage to 68.5%, a significant improvement above the control. The T50 at 10 mg·L−1 was similar to that of the control, whereas T50 increased markedly at GA3 concentrations greater than 10 mg·L−1. A total of 10 mg·L−1 GA3 also shortened T90–T10 to 4.5 d, 3 d less than the control. 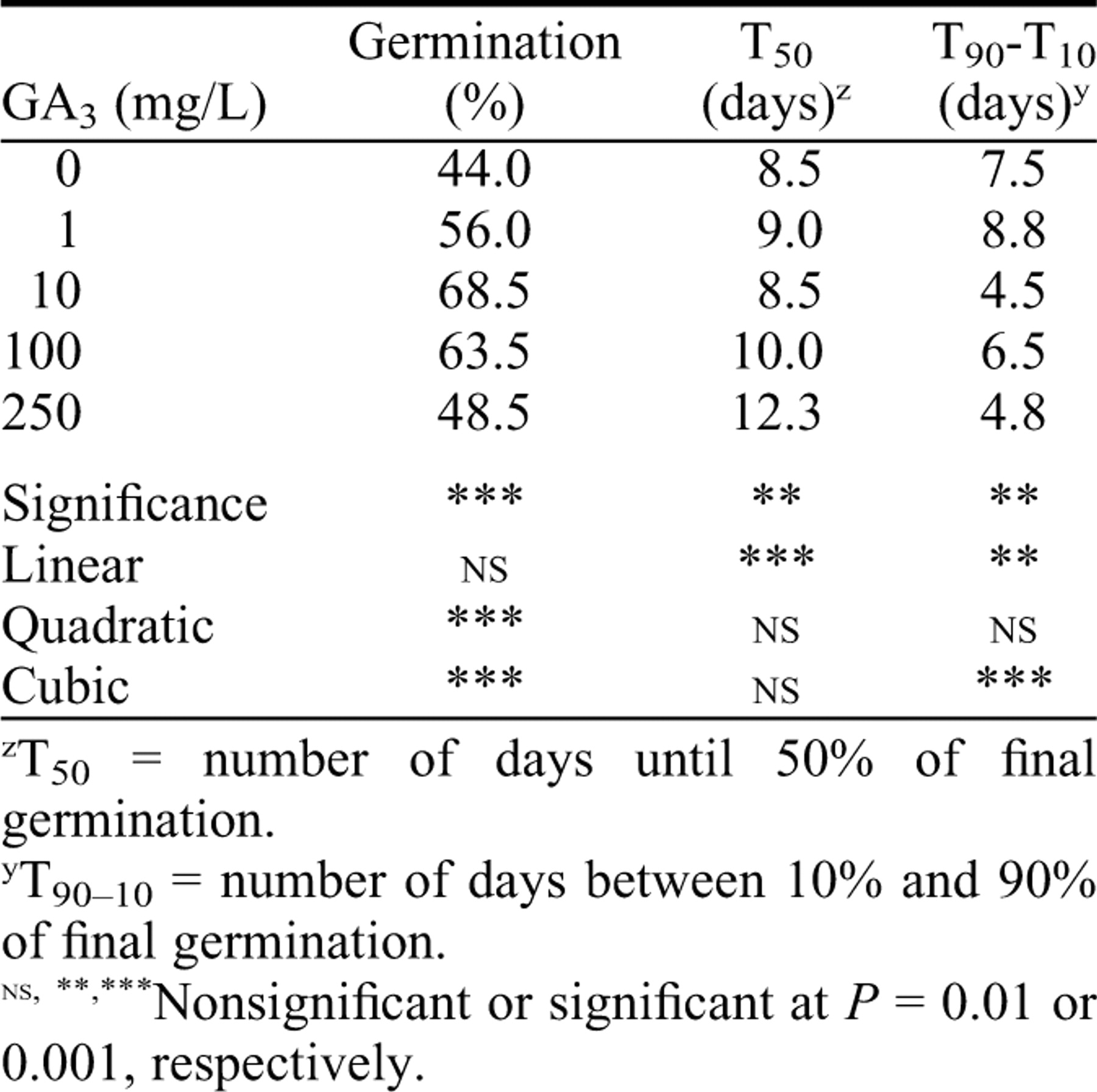 Gibberellins have been reported to stimulate germination in seeds with nondeep and intermediate physiological dormancy (Baskin and Baskin, 1998). The results of this experiment demonstrate that GA3 at 10 mg·L−1 shows promise as a practical method of improving the germination percentage, rate, and uniformity of P. pilosa.

Overall, application of KNO3 had a significant negative effect on the G21 values (Table 3). These results are similar to those observed by Springer and Tyrl (1989) in their experiments with P. oklahomensis. T50 and T90–T10 values were unaffected significantly by the KNO3 concentrations used in this study. 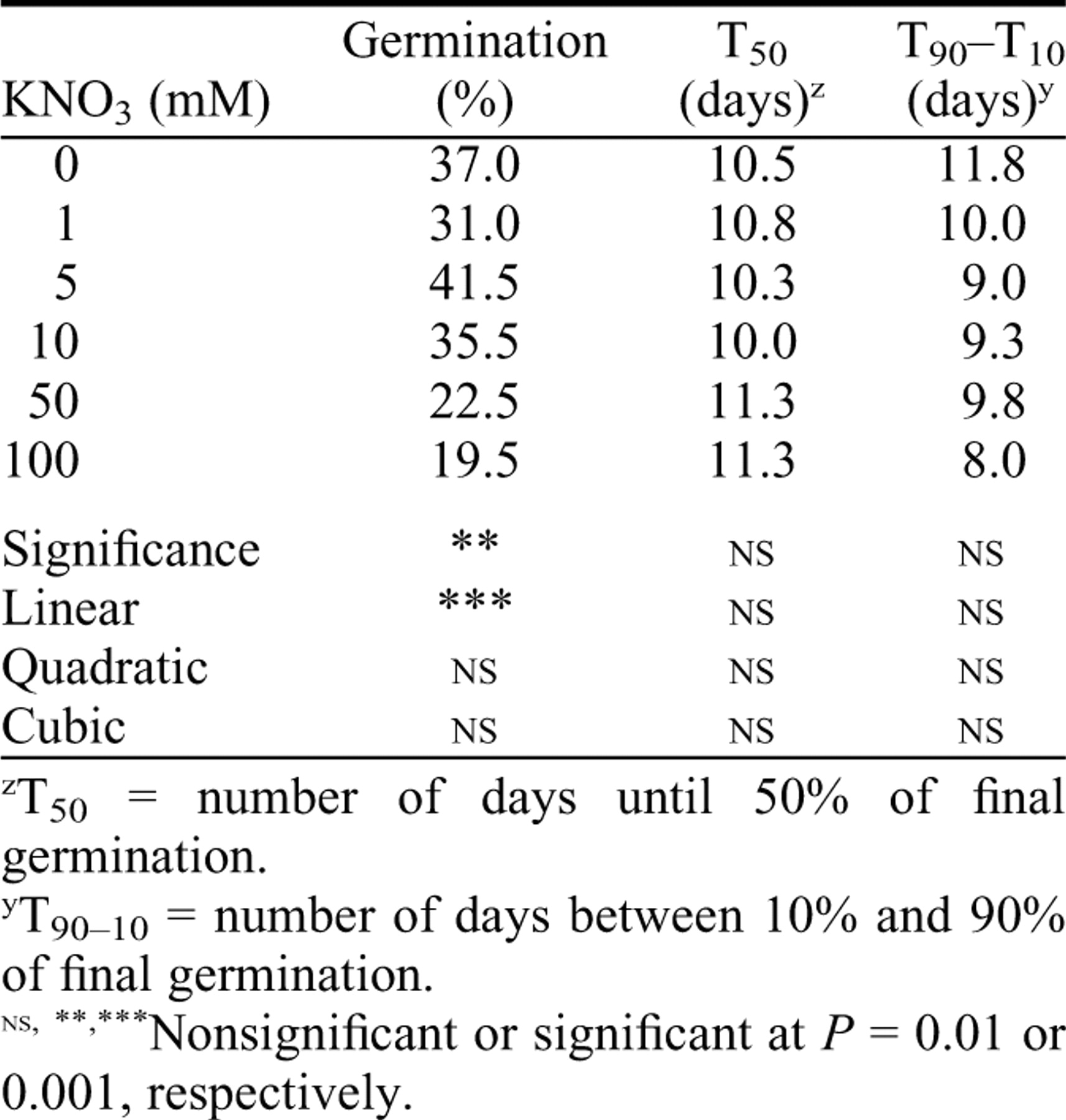 Nitrate acts as a signal molecule promoting germination in seeds of Arabidopsis, possibly through interaction with GA or abscisic acid production pathways (Alboresi et al., 2005). Although 5 mM KNO3 improved germination of P. pilosa seeds above that of the control, the effect was marginal. Additional experiments are needed to test the effects of KNO3 concentrations between 1 and 10 mM.

Expt. 5: Germination in light and darkness.

Daily exposure of P. pilosa seeds to 50 ± 8 μmol·m−2·s−1 PPF from cool-white fluorescent lamps yielded germination responses significantly greater than those seeds kept in total darkness (Table 4). Thus, we can conclude that light appears to be necessary for germination of this species at 20 °C. These results differ from the observation of Carpenter et al. (1993b) that total germination percentage of P. drummondii seeds was unaffected by light or darkness. The seeds of most light-requiring species are physiologically dormant (Hartmann et al., 1997).

Germination responses of Phlox pilosa seeds to light and darkness. 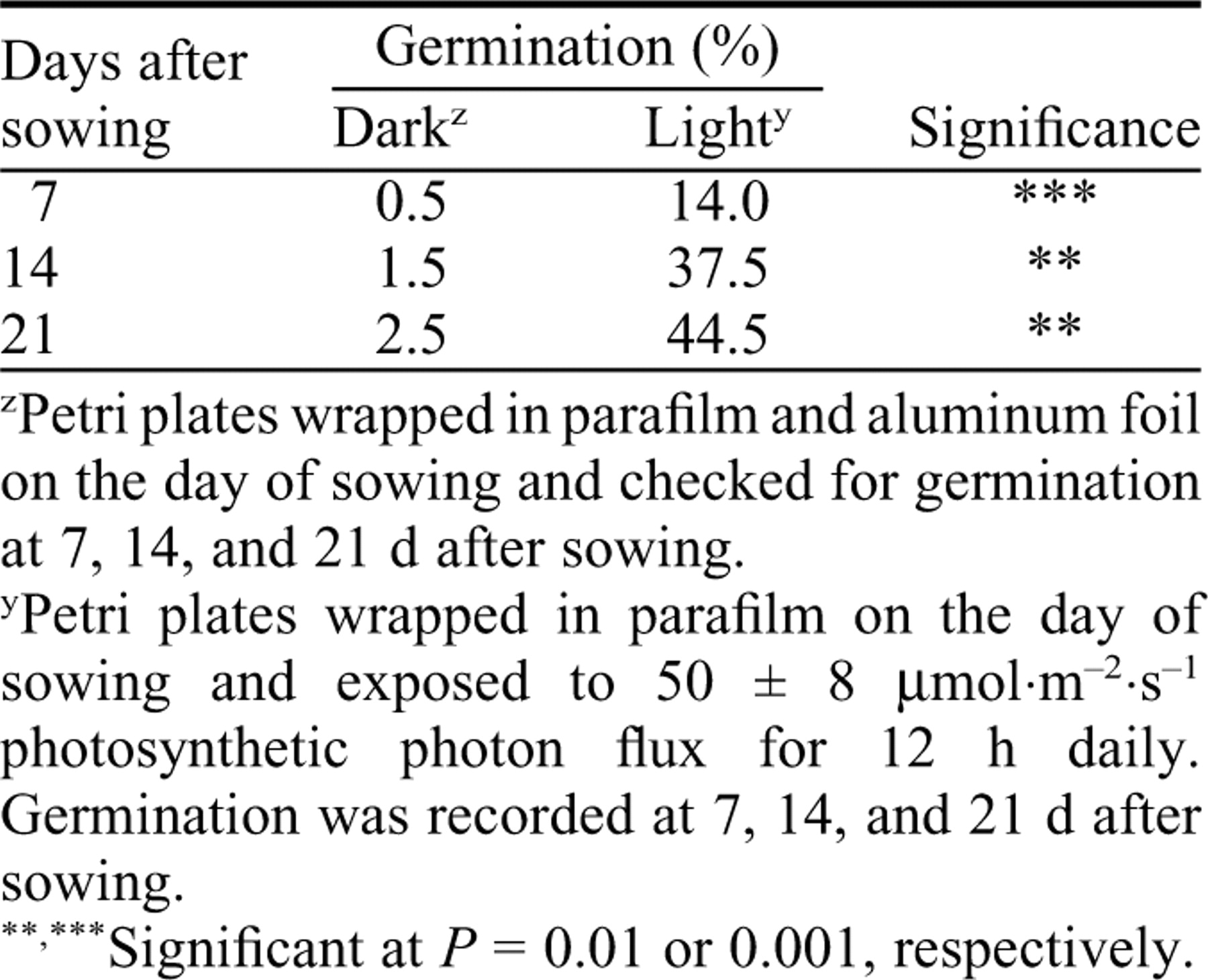 Disinfestation treatment had a significant effect on the presence of seedborne fungi (Table 5); however, it had no effect on the G21 or T50 values (data not shown). T90–T10 was not calculated. The majority of fungi identified on the seeds were Alternaria and Cladosporium species. Rare colonies of Fusarium were observed. It appears that seedborne fungi are not the cause of poor germination in this species.

Effect of surface disinfestation with 0.6% sodium hypochlorite on the presence of seedborne fungi in Phlox pilosa. 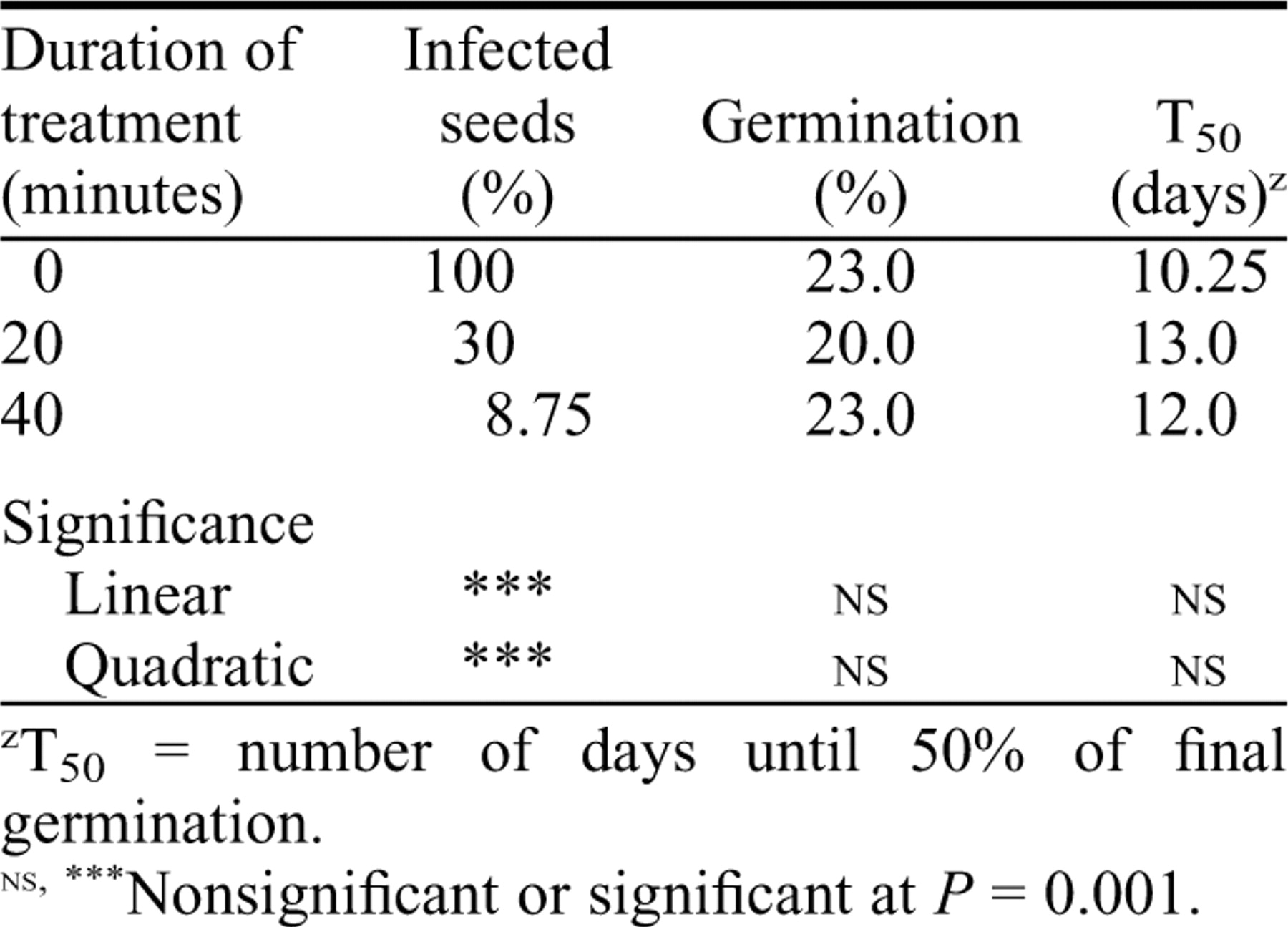 Overall, the greatest improvements in both germination and uniformity were obtained by the addition of 10 mg·L−1 GA3. This treatment improved germination to 68.5% and shortened T90–T10 to 4.5 d. In Expt. 4, GA3 significantly improved G21 over that obtained by 10 weeks of cold stratification, but did not improve G21 when added to stratified seeds. These results indicate that 10 mg·L−1 GA3 may have a practical application for the improvement of germination percentage and uniformity in Phlox pilosa.

Application of KNO3 at concentrations from 1 to 100 mM failed to bring about a substantial increase in germination. Surface sterilization with 10% bleach significantly decreased the incidence of seedborne fungi but did not influence germination, leading to the conclusion that seedborne fungi are not the cause of poor germination in P. pilosa.

Significance, as determined by F test, of the additive effects of GA3 and stratification on G21 (A) and T50 (B) percentage of Phlox pilosa seeds. Strat = stratification. Standard error is represented by vertical bars. NS, **,***Nonsignificant or significant at P = 0.01 or 0.001, respectively. 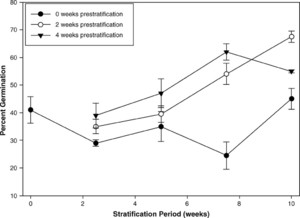 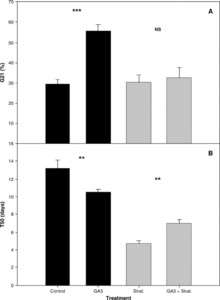