Studies are underway to determine optimal cane management practices in primocane-fruiting blackberry under mild climate conditions (Strik et al., 2007). Identifying the location of productivity within a primocane, bloom pattern among branches, and order of bloom within an inflorescence throughout the harvest season has not been done in this crop and is necessary to optimize primocane management to precisely target harvest off-season markets.

The objectives of this study were to: 1) characterize flowering location, inflorescence morphology, bloom pattern, and range of fruit maturation in primocanes of ‘Prime-Jan’ and ‘Prime-Jim’ grown in western Oregon; and 2) determine the impact of soft-tipping on flowering and fruit ripening patterns of primocanes.

In June 2003, tissue-cultured plugs of ‘Prime-Jan’ and ‘Prime-Jim’ were established at the North Willamette Research and Extension Center (NWREC), Aurora, OR; U.S. Dept. of Agriculture (USDA) hardiness zone 8; elevation 46 m above sea level; average last freeze date 17 Apr.; average first freeze date 25 Oct.; the weather records for this site can be viewed at Anonymous (2005–2006). The soil type was Quatama loam (fine-loamy, mixed, mesic Aqualtic Haploxeralfs). Plants were spaced 0.6 m in the row with 3 m between rows. Five-plant plots were 3 m long with 3 m separating plots. The field was drip-irrigated (3.8 L/hr emitters at 0.6-m spacing) as required, typically 60 min/d (7.6 L/d) from June through September. Plots were fertilized with 55 kg·ha−1 of N, 15 kg·ha−1 of P, and 55 kg·ha−1 of K each spring and an additional 28 kg·ha−1 of N at primocane bloom. Weeds were controlled by use of preemergent herbicides and mechanical methods.

In early Aug. 2005 and 2006, three and six primocanes, respectively, of ‘Prime-Jan’ and ‘Prime-Jim’ under two cane management treatments were randomly chosen and flagged for observation: 1) primocanes “soft-tipped” (upper 2 to 5 cm removed) at 1 m and 2) untipped primocanes (control). In treatment 1, primocanes were soft-tipped to 1 m on several occasions during the growing season, from 15 to 29 June 2005 and from 7 to 26 June 2006, to appropriately tip the various flushes of cane growth. In both treatments, only a primocane crop was harvested. For each cultivar, order of bloom within an inflorescence, as described by Takeda (1987), number of flowers and berries per inflorescence, and days from terminal bloom anthesis to shiny black fruit (Perkins-Veazie et al., 1996) for fruiting structures were recorded. Branches on flagged canes for both treatments and cultivars were labeled and photographed daily to observe bloom pattern. Number of branches, node position of branches, branch length, total node number of branches and main cane, number of fruiting nodes, number of flowers, subsequent ripening among branches within a cane, and days from terminal bloom anthesis to shiny black fruit for each branch were recorded for each treatment and cultivar. The data were analyzed, when appropriate, using PROC GLM (version 9.1; SAS Institute, Cary, NC).

In untipped canes, A1 refers to the main cane or branch (Fig. 1). In soft-tipped canes, A1 refers only to branches (Fig. 1). The terminal flower on the main cane or branch, located on A1, was always the first to open in both cultivars (Fig. 1, “1”). This was followed by a terminal flower on a lower fruiting lateral located on an A2 axis near the basal portion of the inflorescence, similar to semierect blackberry (Takeda, 1987). However, the most basal A2 axis in this study was often the last to bloom (Fig. 1, “8”). On soft-tipped and untipped primocane inflorescences, it was common to have A3 axes, and occasionally A4 axes. Blooming of A3 axes would begin simultaneously with the last opening of the flower on the upper-most A2 axis, which was generally the flower located directly below the terminal flower on the A1 axis. The flower on the most basal A2 axis also opened at the same time, or just after, the opening of the most apical A2 axis flower. Most apical and basal A2 axes consisted of a single flower. The time between the opening of the A1 terminal flower and the first A2 flower was typically 1 to 3 d for both cultivars and did not vary with year. Once the first A2 axis began to bloom, other A2 axes followed acropetally, opening at a constant rate of two to three flowers per day. For A2 axes with multiple A3 flowers, a 3- to 4-d period between A3 flower openings was typical. When present, A4 flowers opened last.

On soft-tipped canes, the most apical lateral branches bloomed within 1 d of each other in both years. Usually, the most basal of the three branches was the first to have the terminal flower on A1 fully open, followed by the branches above it, located at nodes 1 and 2. The number of days between branch three A1 and branch four A1 bloom ranged from 2 to 6 d for ‘Prime-Jim’ and ‘Prime-Jan’, respectively. Most of the canes studied in 2005 had five branches and the number of days to bloom from branch one A1 to branch five A1 ranged from 18 to 21 d for ‘Prime-Jan’ and ‘Prime-Jim’, respectively. In 2006, primocanes with five branches had a similar bloom pattern as observed in 2005. Canes with fewer than five branches had a shorter period between the bloom of A1 (Fig. 1) on branch one to A1 bloom on the most basipetal branch. In general, branch bloom pattern among soft-tipped canes was similar for both cultivars in 2005 and 2006. Soft-tipped canes had 31% to 70% more flowers than untipped primocanes, depending on cultivar and year (Table 1).

Once the terminal flowers on upper branches opened, bloom rate and pattern were as described for both cultivars. Although A1 flowers on the third branch tended to open earlier than the upper two branches, A1 bloom pattern for the remaining lower branches was basipetal. In both cultivars and years, a few basal branches remained vegetative, whereas others were still blooming or fruiting when observations were stopped on 10 Oct. 2005 and 29 Oct. 2006 as a result of adverse weather.

In conclusion, soft-tipping primocanes to 1 m encouraged branching and thereby significantly increased the number of fruiting nodes per cane compared with untipped primocanes. Furthermore, branching was more predictable in soft-tipped primocanes, particularly below the site of tipping, resulting in more uniformity of fruit ripening. Untipped primocanes consistently reached 2 m in length, making fruit difficult for pickers to reach and increased the risk of cane breakage. In both years, soft-tipped and untipped primocanes produced basal lateral branches that remained vegetative. This may imply that tipping branches, and thereby removing apical dominance, may encourage termination in an inflorescence and perhaps further increase the number of flowers per branch.

Structure of bloom pattern of an inflorescence on soft-tipped and untipped primocanes. Order of bloom is designated “1” through “8.” Numbered flowers preceded lettered flowers. 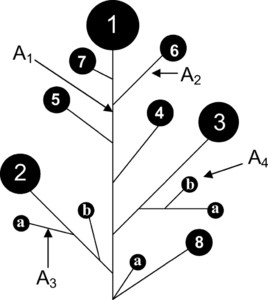