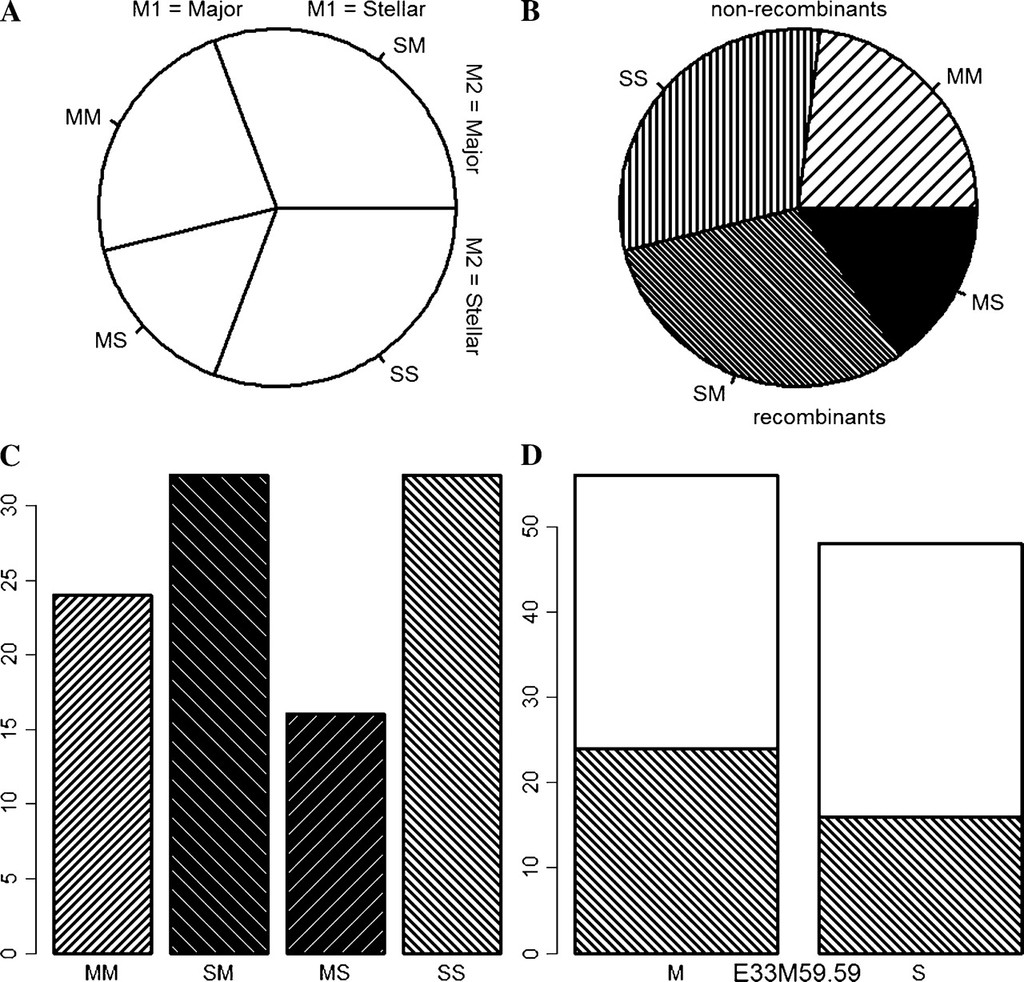 (A–D) Pie charts and bar plots bias interpretation by choice of colors, order and perspective. It is difficult in view A, organized by markers, to assess that roughly 50% of individuals are recombinants, indicating no linkage. This could be seen in view B, except for the distraction of shading and angles. Bar plots in views C and D show two less-than-helpful ways to organize the same data. Three-dimensional effects from spreadsheets can further obscure results. 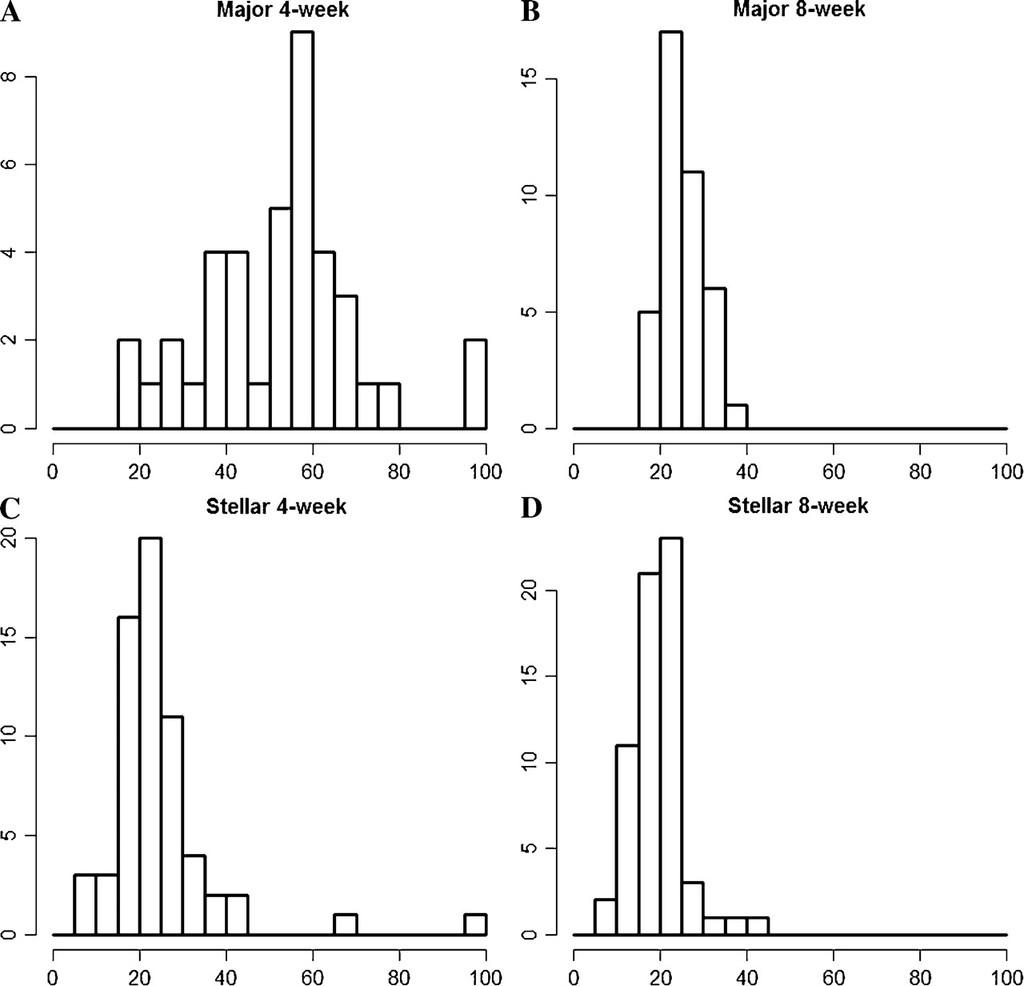 (A–D) Histogram summaries for flowering time after 4-week (A, C) and 8-week (B, D) vernalization. Plants are partitioned by marker E33M59.59 into Major (A, B) or Stellar (C, D) type. Horizontal axes are identical; vertical axes show number of plants per 5-d interval. Plants recorded as 100 d never flowered. 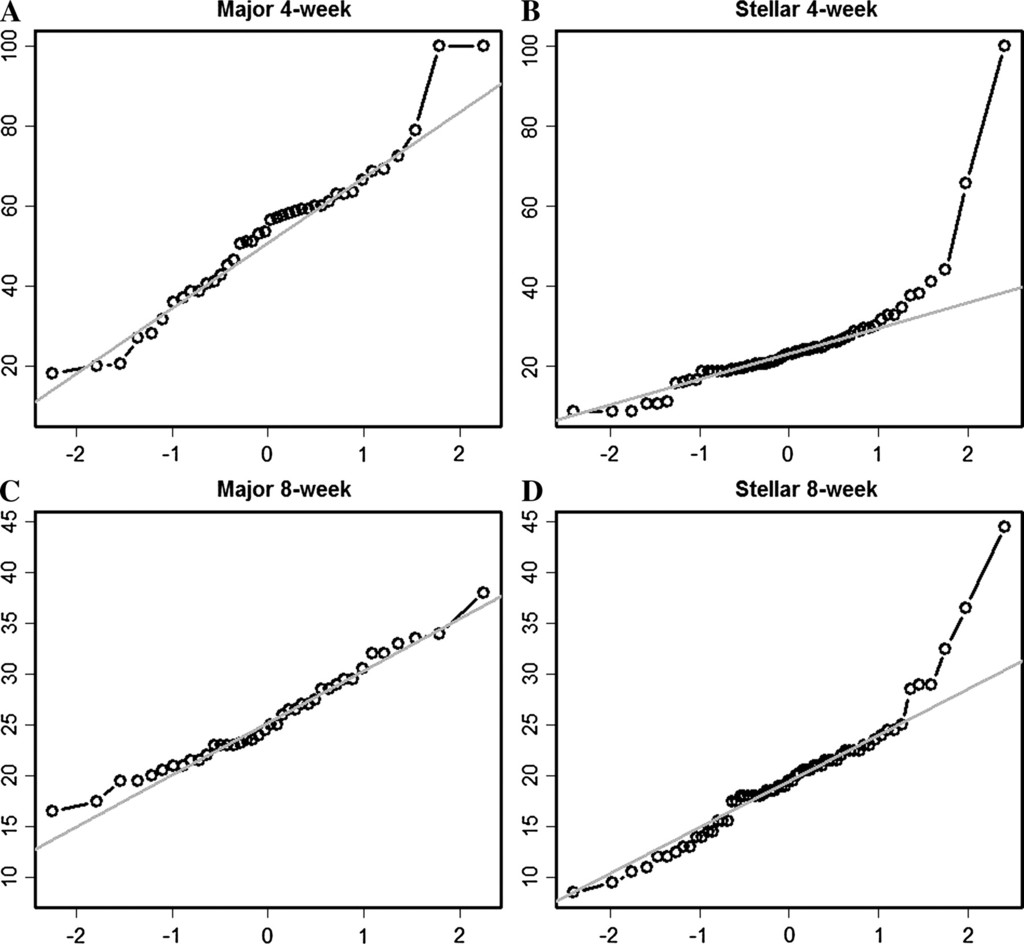 (A–D) Q-Q plots for flowering time after 4-week (A, B) and 8-week (C, D) vernalization. Plants are partitioned by marker E33M59.59 into Major (A, C) or Stellar (B, D) type. Flowering times (vertical axes) are ordered from smallest to largest and are plotted against corresponding expected values, or quantiles, from a standard normal. Solid gray lines run through lower and upper quartiles; deviation from this line indicates lack of normality. 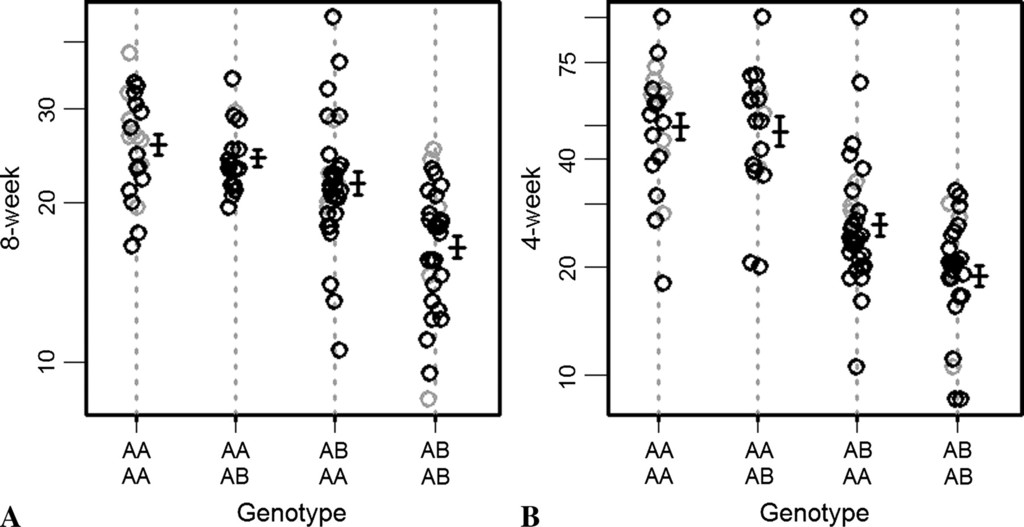 (A, B) Jittered phenotype by genotype plots of flowering time in days from 8-week (A) and 4-week (B) vernalization treatments. Missing genotypes are imputed (gray circles) based on other map information. The three 4-week values of 100 d did not flower. Stellar (AA) and Major (AB) are identified by markers E33M59.59 (top row of horizontal axis) and ec2d1a (bottom row). Thus the second column of each plot (AA/AB) is for plants that are Stellar at E33M59.59 and Major at marker ec2d1a. Values are jittered horizontally to highlight the vertical spread in data better. Vertical scale is logarithmic to addresses increasing variance with mean. Bars to right of jittered points indicate means ±1 se. There appears to be a strong phenotype difference at E33M59.59 for the 4-week vernalization, although other group differences appear significant based on ses. This is confirmed by formal analysis of variance.

(A, B) Scatter plots of 4-week versus 8-week vernalization. View A is a raw plot that has data bunched in the lower left and no annotation. View B identifies data by marker E33M59.59 with both color and symbol, and is plotted on a log-log basis.

(A, B) Regression curves on separate plots by marker E33M59.59 genotype. Plot regions are kept the same for comparison. Solid lines are for the featured genotype—Major (A) or Stellar (B)—with a dashed line confidence envelope of 2 × se of the difference between regression lines; dotted lines are regression lines from the other genotype. Lines are significantly different using analysis of covariance. Note the similar spread from the regression line for both genotypes when plotted on log-log scale (sd = 0.068 and 0.072, respectively, in log10 units).

(A, B) Interaction plot for days to flower after 4-week (A) or 8-week (B) vernalization for the two markers. The vertical axis is on the log scale again. Bars around means correspond to ±1 se. Stellar (AA) and Major (AB) are identified by markers E33M59.59 (horizontal axis) and ec2d1a (colors and legend). Thus, there are no significant flowering time differences at ec2d1a if E33M59.59 is Stellar, whereas the 7-d (A) or 5-d (B) differences when E33M59.59 are Major are significant. 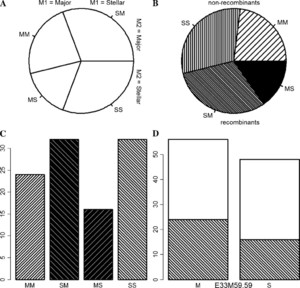 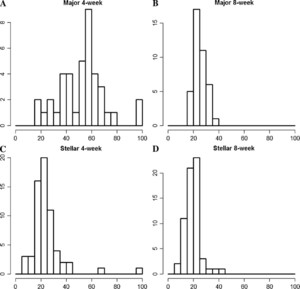 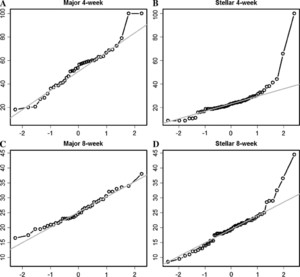 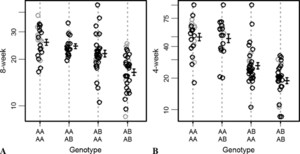