The nutritional and medicinal value of pomegranate fruit (Punica granatum L.) is increasingly recognized in the Western world. The scientific literature contains many reports describing the value of chemicals produced by the pomegranate fruit as an antioxidant, anticancer, antiviral, and antibacterial agent (De Nigris et al., 2005; Malik et al., 2005; Seeram et al., 2006). Accordingly, the public is more aware of the benefits of the pomegranate fruit, and its consumption is gradually increasing. Red pomegranate cultivars are among the most commercially valuable cultivars because of their appealing red skin color and their good taste. One of the more recognized and popular pomegranate cultivars is ‘Wonderful’, with red fruit skin and dark-red aril color. However, ‘Wonderful’ and its related cultivars ripen in early to mid October in Israel and are considered as late ripening. In addition, ‘Wonderful’ has semihard seeds and a bit sour flavor. Therefore, earlier red peel and flesh cultivars that have softer seeds are much sought after. In a survey of local Israeli pomegranate varieties we identified ‘Shani-Yonay’ as a new type of pomegranate. This pomegranate was collected and grown among 40 accessions in a plot in Newe-Ya'ar Research Center, located in the western Yizre'el Valley (Bar-Ya'akov et al., 2003). The fruit of ‘Shani-Yonay’ ripens in Israel in the last third of August and precedes the ripening time of ‘Wonderful’ by more than a month. The fruit of ‘Shani-Yonay’ has an appealing red skin color and soft, dark-red, and sweet arils.

‘Shani-Yonay’ is a seedling from an unknown source. It was found by Dr. Fathi Abed El Hadi in Summer 1995 as a small shrub in the farm of Mr. Ehud Yonay in the northwest of Israel. Cuttings were taken from this tree and rooted in the pomegranate orchard in Newe-Ya'ar Research Center. Newe-Ya'ar is located in the western Yizre'el Valley (lat., 32º42′N; long., 35º11′E). This region's mean diurnal minimum temperature in January is 6 °C. The mean diurnal maximum temperature in July is 33 °C. The average annual amount of chilling hours (<8 °C) is 445. ‘Shani-Yonay’ was planted together with several other pomegranate cultivars such as ‘Rosh Hapered’, ‘Wonderful’ (the main commercial cultivars in Israel), ‘Mollar de Elche’, and some other local cultivars. In the trial plot in Newe-Ya'ar, the trees are grown on their roots and trained to three to four principal trunks using intensive agricultural techniques. Since planting, a detailed follow-up was done on the tree and the fruit characteristics. The data obtained indicate that ‘Shani-Yonay’ is a new and distinctive cultivar with potential commercial value. In 2002, a commercial plot of 50 trees was established from cuttings of ‘Shani-Yonay’ 3 km southwest of Newe-Ya'ar. In 2003, the cultivar was applied for registration in Israel (application no. 3512/03) followed by its distribution among growers.

‘Shani-Yonay’ has a shrubby growth habit and produces many lateral drooping branches. It tends to develop many shoots on the lower parts of the main branches and they have to be removed consecutively. The tree is of medium size (3 m in height and 1.6 m in width) and spreads horizontally. It has good vigor (similar to ‘Wonderful’) and good growth intensity. The branches are thornless, except for very few on current-year young branches. The bark color is gray, according to the Royal Horticultural Society (RHS) color chart (RHS197A) (Royal Horticultural Society, 1966). Young branches are quadrangular, light-green, and partly colored with purple (RHS186A-C). Leaf budding is early, during the first days of March, along with ‘Wonderful’. The average size of fully developed leaves is 7.05 ± 0.016 cm in length and 2.00 ± 0.05 cm in width. Leaf color is green (RHS137A), slightly lighter downward, and the short petioles (up to 5 mm) are light green with a purple nuance upward. Leaf shape is similar to that of ‘Wonderful’ and ‘Rosh Hapered’. Leaves have an oblanceolate shape with an obtuse apex and an acuminate base. The leaf margins are entire, and the surface is glabrous and smooth on both sides. The leaves fall in November.

‘Shani-Yonay’ bearing habit is of a single or multiple fruits on newly developed growth. Most years, minimum thinning of fruits is essential for reducing pest damage, physiological disorders, scrubbing, and increasing fruit size. ‘Shani-Yonay’ is a productive cultivar with a yield of 35 to 40 kg/tree compared with 50 kg/tree for ‘Wonderful’.

The fruit can be damaged by the Deudorix livia (Klug, 1834). No special sensitivity to insects or diseases was observed.

Like all other pomegranate cultivars, ‘Shani-Yonay’ starts flowering in Newe-Ya'ar in mid April to the beginning of May and lasts until June. In this respect, ‘Shani-Yonay’ is similar to ‘Wonderful’ and ‘Rosh Hapered’. The flowers consist of hermaphrodite (vase shaped) and male flowers with poorly developed or no pistil and ovary (bell shaped). The petals, six to seven, are orange red (RHS34A), very delicate, and a little wrinkled like all other cultivars known to us. The outer side of the sepals, six to eight, is red (RHS44A) and the inner side is orange red (RHS34A), fused in their base to form a red fleshy vase shape (RHS44A). The petals are much longer than the sepals and alternate with the sepals. The flower has several hundred stamens with orange-red (RHS34A) filaments and yellow (RHS13C) anthers. The stigma of the hermaphrodite flower is at anther height or emerging above the anthers. Time to ripening of ‘Shani-Yonay’ fruit is short and precedes that of ‘Wonderful’ by more than 1 month. Most of the fruit have ripened in the last third of August. If not picked, fruit could last on the tree until October. Although the fruit of ‘Shani-Yonay’ can remain for a long time on the tree, they do not tend to crack even if the fruit is overripe.

The fruit is round and small to medium in size (Fig. 1). The average fruit circumference when picked in the end of August is 264 ± 3 mm and the average weight is 274.8 ± 3.7 g. Under the same growth conditions in Newe-Ya'ar Research Center, the average circumference of ‘Wonderful’ is 295 mm and the average weight is 412.3 g. However, the fruit can reach a bigger size when picked in September. The crown is high and partly open. The peel is relatively thin compared with ‘Wonderful’. The color of the ripe fruit outer skin is dark pink to red, with a pink background. Skin color can vary depending on weather conditions, and it develops to a darker, deeper color as the season advances. The average aril weight is 0.235 g compared with 0.370 g for ‘Wonderful’. The arils are dark red (RHS46A) and have an attractive appearance. Unlike the skin color, the arils are always dark red without dependence on weather conditions. The flavor is sweet, and total soluble solids are 14% to 15% compared with 17% to 18% for ‘Wonderful’ in ripe fruit. The arils separate easily from the fruit. The seeds are small and soft compared with those of ‘Wonderful’.

‘Shani-Yonai’ fruit suffer much less from sunburn compared with ‘Wonderful’, probably because of the early ripening season combined with the early red color development of the fruit.

Because pomegranate fruit is nonclimacteric and does not continue to ripen after detachment, fruit should be picked after they reached maturity on the tree. We consider the fruit of ‘Shani-Yonay’ mature when the taste is sweet and has no astringency, although the fruit reaches attractive skin and aril color 2 to 3 weeks earlier. The fruit can be marketed fresh and after a cold storage of 3 months. Trials are being conducted for elongating the storage period. ‘Shani-Yonay’ is suited for a variety of uses, including consumption as fresh fruits, as packaged mechanically separated arils (Rodov et al., 2005), or as juice.

‘Shani-Yonay’ was submitted for registration under the terms of the Israeli Plant Breeders’ Right Law 5733-1973 (application no. 3512/03). Since it was released for commercial use in 2003, about 50 ha have already been planted in Israel. Nonindexed budwood is available pending a special contract through ‘Kidum’ R&D Applications Unit of the Agricultural Research Organization (ARO). 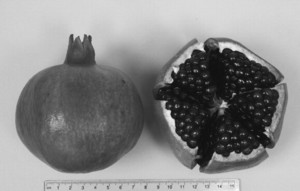