Resistance breeding in cucumber first began in the United States to address the problem of cucumber mosaic virus (CMV), the most destructive disease of cucumber at that time. Initial crosses to the cultivar ‘White Spine’ were conducted at Cornell University by Oved Shifriss and C.H. Myers using the oriental cultivar Chinese Long, which had been introduced to the United States by R.H. Porter of Iowa State University (Porter, 1929). The largely recessive character of this CMV resistance (Shifriss et al., 1942) was lost during multiple backcross generations. Consequently, early generations relied heavily on the pedigree method (Munger, 1993) (Fig. 1). Crosses were made to several commercially acceptable varieties, self-fed for numerous generations and, to maintain CMV resistance, crossed to an advanced line between ‘Chinese Long’ and several other popular varieties. Scab resistance was introgressed to develop ‘Marketmore’, which quickly gained popularity. A major flaw of this cultivar is that it tends to form light-colored fruit when grown at high temperatures. Introgression of the u gene (Strong, 1930) for uniform fruit color was achieved by backcrossing to the sister line ‘Tablegreen’, resulting in ‘Marketmore 70’.

The prolonged longevity of foliage in the field resulting from CMV and scab resistance resulted in the prominent appearance of mid- to late-season powdery mildew infection. To address this issue, powdery mildew resistance (PMR) from C.E. Peterson's cultivar ‘Spartan Salad’ was added to ‘Marketmore 70’ by backcrossing five times alternating with two generations of self-pollination (Jahn et al., 2002). The resulting cultivar was named ‘Marketmore 76’ and proved to be more widely adapted than earlier versions of ‘Marketmore’. Around this time, it was noticed that the PMR trait of ‘Marketmore 76’ was in an unfavorable linkage with resistance to target leaf spot (Corynespora cassiicola) (Lane and Munger, 1985). Increased resistance to this and several other foliar pathogens was obtained by crossing with ‘Wisconsin 2757’ and backcrossing to ‘Marketmore 76’ to produce ‘Marketmore 87’. Finally, ‘Marketmore 97’ was developed by adding resistance to zucchini yellow mosaic virus (ZYMV), watermelon mosaic virus (WMV), and papaya ringspot virus (PRSV) from ‘Marketmore 88’ (Fig. 1).

The fruit of ‘Marketmore 76’ and ‘Marketmore 97’ are nearly identical in length, diameter, weight, and appearance (Table 1). Both are thick-skinned slicing cucumbers that ship well and are not easily bruised or scarred. They have cylindrical-shaped fruit with small white spines and dark green skin with faint light green striping when mature (Fig. 2). All cultivars in the ‘Marketmore’ series have average-sized vines with dark green leaves that, as a result of resistance to a number of foliar pathogens, tend to remain on the plant well into the growing season.

Most resistant germplasm sources contain numerous undesirable horticultural traits. The biggest challenge during the development of ‘Marketmore 97’ has been the uncoupling of resistance traits from reduced yield, poor fruit quality, and delayed flowering. Through decades of intensive selection, significant progress has been achieved. Although ‘Marketmore 97’ ultimately yields as high as or higher than ‘Marketmore 76’ (Table 1), it is several days later (Fig. 3). Selection for earlier flowering continues but appears to be correlated with a considerable yield penalty (unpublished data).

In conclusion, resistance breeding in cucumber began with the objective of developing resistance to a single disease. However, once this work was completed, additional diseases began to appear that previously had not been problematic. This process has continued for 70 years and has culminated in cucumber germplasm resistant to many diseases. In this article, we present ‘Marketmore 97’, the newest disease- and insect-resistant slicing cucumber released from Cornell University. It has fruit qualities similar to earlier ‘Marketmore’ cultivars but has combined resistances to 10 diseases and to cucumber beetles, is bitterfree, and is available as the gynoecious near-isogenic line ‘Marketmore 97F’. We expect this cultivar to perform particularly well in low-input agricultural settings and as a resistance source for further breeding and hybrid development.

Pedigree of several members of the ‘Marketmore’ series, including ‘Marketmore 97’. Modified from Munger (1993).

‘Marketmore 97’ fruit at a harvestable stage. Used with permission of the Territorial Seed Company.

Cumulative number of fruit per plant plotted against number of days after first harvest. ‘Marketmore 97’ yields at least as much as ‘Marketmore 76’ but is several days later. 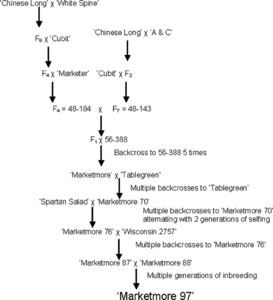 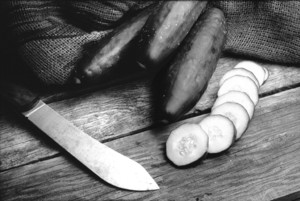 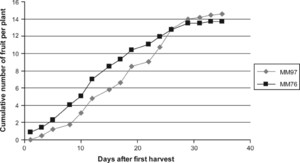