‘Belona’ and ‘Soleta’ are two new almond [Prunus amygdalus Batsch, syn. P. dulcis (Mill.) D.A. Webb] cultivars from the breeding program of the Unidad de Fruticultura, CITA de Aragón. They are characterized by their kernel quality and by the possibility of becoming a commercial alternative to the two traditional almond cultivars in the Spanish market, ‘Marcona’ and ‘Desmayo Largueta’, to which they are comparable in their aspect and industrial quality but different from them in their late blooming date, tolerance to frosts, and, mainly, self-compatibility.

Since the beginning of almond research in Zaragoza in 1966, the most important problem detected in Spanish almond growing was its low productivity attributable to the occurrence of frosts at blooming time or later, to deficient pollination, and to drought, because almond was mostly grown in nonirrigated conditions (Felipe, 2000). As a consequence, the main aim of the subsequent breeding program was the development of late-blooming and self-compatible cultivars. The first three cultivars released were ‘Aylés’, ‘Guara’, and ‘Moncayo’ (Felipe and Socias i Company, 1987), with ‘Guara’ having represented more than 50% of the new almond orchards in the last years (MAPA, 2002). Later, three more cultivars were registered in 1998, ‘Blanquerna’, ‘Cambra’, and ‘Felisia’ (Socias i Company and Felipe, 1999), with ‘Blanquerna’ having very good productivity and kernel quality and ‘Felisia’ very late blooming time (Fig. 1). Breeding, however, has continued, pursuing autogamy and fruit quality, aiming at defining the best end use of each cultivar (Socias i Company et al., 2006) and taking into account the preference of the Spanish market for ‘Marcona’ and ‘Desmayo Largueta’.

Both cultivars come from the cross done in 1988 of ‘Blanquerna’, a self-compatible seedling from the self-compatible Italian cultivar Genco by the French cultivar Belle d'Aurons characterized by its kernels of excellent quality. This cross was made with the aim of using a self-compatibility source other than ‘Tuono’, so far the most used parent in almond crosses (Socias i Company, 2002).

Self-compatibility was tested as soon as the original seedlings produced the first flowers by examining the arrival or not of pollen tubes at the ovary after self-pollination (data not shown). The selections of the cross with the nuts and kernels of highest ratings were recovered and autogamy was studied on three grafted trees of each selection during several years as a result of the large variability found between years in field trials for fruit set (Socias i Company et al., 2005). Table 1 shows the average results of 4 years for three pollination treatments in the field: self-pollination, crosspollination with cross-compatible pollen of ‘Marcona’, and bagging, applied as described by Socias i Company et al. (2005). Selections F-4-25 and F-4-43 showed a very low level of self-compatibility as shown by the low fruit sets after self-pollination and bagging in agreement with the previous observations on pollen tube growth. Selections F-4-9 and F-4-35 showed good fruit set after self-pollination, but not after bagging, as a result of their flower morphology not allowing natural autogamy. The four other selections continued their evaluation resulting from their sufficient level of autogamy (Grasselly et al., 1981), which, together with their bloom density, may ensure a commercial crop. The S-allele genotype of both cultivars has been determined as SfS23 (O. Kodad, unpublished data).

Field behavior has been evaluated in the three grafted trees of the almond collection and in two external trials. One of the most important points considered was resistance to frosts. Especially important was the observation in 2003, with a frost of –2.5 °C for 5 h on 18 March. Whereas cultivars considered as resistant to frosts such as ‘Guara’ (Felipe, 1988) experienced a yield reduction rated at 50%, the four selections under study experienced different levels of losses: in F-3-34 and F-3-35, the decrease was similar to the levels observed in ‘Guara’, but in ‘Belona’ and ‘Soleta’, the reduction was only 20% to 30%. All selections were at similar phenologic stages, thus showing different susceptibility to negative temperatures. This fact must also be related to their blooming time, which in Zaragoza takes place on average a few days before ‘Guara’ (dates in Fig. 1 referred as 50% of open flowers).

Ripening time is later than in ‘Guara’, which allows the succession of harvest of the different cultivars. The average ripening date in Zaragoza is 23 Aug. for ‘Guara’, 8 Sept. for ‘Belona’, and 17 Sept. for ‘Soleta’, following the same order for ‘Marcona’ and ‘Desmayo Largueta’ (Table 2). Nut fall before harvest has been very low, but nuts fell easily when shaken.

Characteristics of the new cultivars. 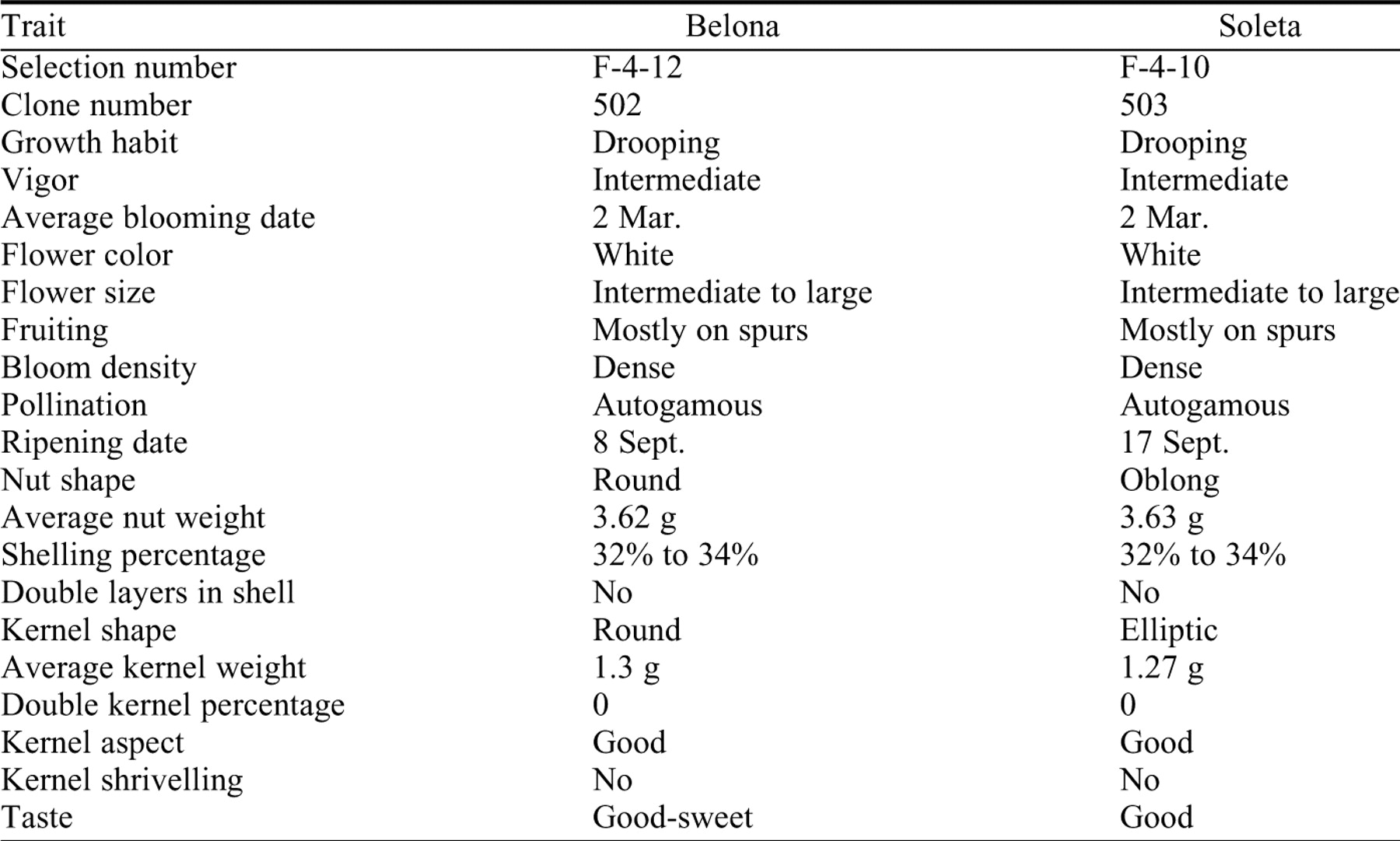 Tree training has been easy without the problem of bending branches with ‘Guara’. Adult trees show an intermediate vigor and a good equilibrium between vegetative growth and production; thus, pruning may be reduced more in ‘Soleta’ than in ‘Belona’. ‘Soleta’ is slightly susceptible to Polystigma, but ‘Belona’ is quite tolerant.

The external trials have shown the good adaptation of ‘Belona’ and ‘Soleta’ to different growing and weather conditions. A trial in Aniñón (Zaragoza) at 800 m above sea level (asl) and with a very cold climate has had good production even in years with late frosts. A trial in El Pinós (Alacant), at 575 m asl but with a milder climate, has shown their very good production as well as vegetation (G. Valdés, unpublished data). Blooming and ripening dates observed in these locations have been, as expected, earlier in El Pinós than in Zaragoza but later in Aniñón.

The essential traits of ‘Belona’ and ‘Soleta’ have been reported in Table 2. Quality has been a decisive criterion in the selection process. Nuts and kernels show a very good aspect and good size without double kernels. The shell is hard, adapted to the Spanish industry. Shape has been carefully considered, because the ‘Belona’ nut is very similar to that of ’Marcona’, but the kernel is longer and thinner (Fig. 2). The ‘Soleta’ kernel is very similar to that of ‘Desmayo Largueta’, although not the nut (Fig. 3). Industrial cracking has been carried out by the Cooperative “Frutos Secos Alcañiz” and has shown very good results without the presence of a double layer in the shell. The presence of broken kernels has been low with an outstanding behavior of ‘Belona’. Kernel percentage is high for a hard-shell cultivar because the kernels fill the inner shell space. In 2005, when a small nut size was observed in most growing regions, kernel size reduction was lower than nut size decrease with an increase of 4 points in the average shelling percentage.

Because the main use of ‘Marcona’ is as blanched kernels, the Cooperative “Frutos Secos Alcañiz” carried out the blanching of ‘Belona’, obtaining very good results with the lower increase of broken kernels and the absence of unblanched kernels probably resulting from the thinner kernels of ‘Belona’ (Table 3). Kernel taste is very good with a slight sweetness.

Blanching of Belona kernels in comparison with the commercial Spanish cultivars.

Similarly, the characteristic trait of ‘Desmayo Largueta’ kernels is their use for roasting, because the seedcoat is easily removed after roasting. The industry “Almendras Castillo de Loarre” proceeded to a similar operation for the two new cultivars and ‘Desmayo Largueta’, obtaining very good results for ‘Soleta’. Kernel taste, both raw and roasted, is very good.

The chemical composition of the kernels of the new cultivars has been determined to establish the best utilization opportunities of each one. Their content in fatty acids is very high, higher than in ‘Marcona’ and ‘Desmayo Largueta’ (Table 4), a very interesting trait for “turrón” (nougat) production. As a consequence of the inverse relationship of fatty acids and protein, the protein content is lower. The percentage of oleic acid, that of higher quality for fat stability and nutritive value in the lipid fraction, is especially high in ‘Belona’, over 75% (Table 4). This cultivar also shows a very high content of tocopherols (both of α-tocopherol and total tocopherol), although not as high as in ‘Marcona (Kodad et al., 2006), indicating good storage quality because tocopherols have an important role in avoiding rancidity and in nutrition for their vitamin E activity.

Chemical composition of the new cultivars in comparison with Marcona and Desmayo Largueta.z

These two cultivars were presented with patents on 27 Oct. 2005 at the Spanish Registry of Protected Cultivars and are available to nurseries though provisional licenses by GESLIVE (Av. Generalísimo 25-1°, 28660 Boadilla del Monte, Madrid, Spain).

Average blooming dates (7 years) of the new cultivars in comparison with those usually grown. Percentages refer to the amount of open flowers. 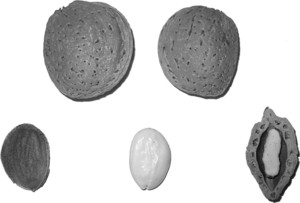 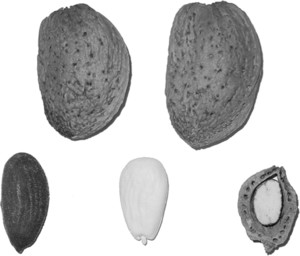