Sweet kerassia (Prunus cerasia Blanche) is a common plant in the eastern Mediterranean region, particularly in Israel, Syria, and Lebanon (Holland et al., 2006a,b). Kerrasia is a landrace traditionally grown as a small bushy plant that produces thorny flexible branches with a tendency for alternative bearing. Grafting on an appropriate rootstock, such as ‘Marianna 2624’, generates a small tree that produces regular good yields. The fruit has an external appearance resembling that of a cherry fruit with respect to size and shape and that of a grape berry with respect to color and size. These features together with its good taste make it an attractive fruit for usage as fresh cut in salads or for consumption as a whole fruit. A new selection designated as ‘Shezifon’ was selected at Newe-Ya'ar Research Center. ‘Shezifon’ produces a high yield of tasty, dark blue fruits and has potential as a commercial cultivar adapted for growth in hot, dry climates.

‘Shezifon’ is a selection from the landrace sweet Kerassia (Prunus cerasia) (Goor and Rapaport, 1949; Goor et al., 1966; Mouterde, 1966; U.S. Dept. of Agriculture, 2006). The original plant was located in 1990 in a village near Newe-Ya'ar and hardwood cuttings were grafted on ‘Marianna 2624’ (Assaf, 1992). The accession numbered P.657-158 (‘Kerassia Metouka’) was planted in the Newe-Ya'ar Research Center plum orchard. Newe-Ya'ar is located in the western Yizre'el Valley, lat. 32°42′N, long. 35°11′E. The mean diurnal minimum temperature in January is 6 °C. The mean diurnal maximum temperature in July is 33 °C. Two repeats of five trees were planted. The annual precipitation in Newe-Ya'ar is 580 mm, mainly in winter, and the trees were fertigated from April to October.

The vigor of ‘Shezifon’ trees upon grafting on ‘Marianna 2624’ rootstock is intermediate (similar to Japanese plum cultivar ‘Santa Rosa’). Untrained branches tend to spread to form quite an open small tree. Leaf shape is lanceolate with an acute tip and an obtuse base. Full size leaf is 7 cm long and 4 cm wide, and petiole length is 1.4 cm. The blade margins are crenate with a nearly smooth upper surface. Leaf arrangement is alternate. The color of a mature leaf is green (RHS137A for the upper surface and RHS137C for the lower). Young shoots in springtime are green. Chilling requirements of ‘Shezifon’ have not yet been determined. On the basis of observations at Newe-Ya'ar Research Station, 590 chilling hours (below 8 °C) or 43.6 chilling portions (according to the dynamic model) are sufficient for budbreak, good foliage cover, and abundant blooming. Rudenko indicated that generative buds of sweet kerassia are particularly prone to cold damage when it was grown in Moldova (Rudenko, 1974).

Under the conditions of Newe-Ya'ar, ‘Shezifon’ is highly productive and starts to crop early. In Newe-Ya'ar, the average yield of the first 6 years is 12.9 kg/tree. This is a high yield considering the tiny size of the fruit. We did not observe any tendency for biennial bearing.

‘Shezifon’ performed well under the climatic conditions at Newe-Ya'ar and did not display any unusual sensitivity to known diseases.

‘Shezifon’ is easily propagated in Newe-Ya'ar by grafting. We successfully used ‘Marianna 2624’, ‘GF.677’, and Japanese plums as rootstocks.

‘Shezifon’ has a flower of 1.7–2.1 cm diameter with white smooth petals. The style is straight with the stigma emerging above the anthers height at anthesis. The sepals are green (RHS144A), and the anthers are yellow (RSH162A). Flowering is abundant. One or two double-flower lateral buds are situated on spurs every 1.5–2.0 cm along the branches.

Sealing unopened flowers with paper bags resulted in 19.3% fruit set. Therefore, we conclude that ‘Shezifon’ is autogamous self-compatible. This data are in accordance with reports that P. cerasia is a self-compatible hexaploid plant (2n = 48) (Rudenko, 1974).

‘Shezifon’ has a very small almost rounded fruit with an average weight of 7.63 ± 0.22 g and a multiyear average of 22.0 ± 0.9 mm circumference as compared with 43.7 ± 0.2 for ‘Santa Rosa’. The fruit shape is rounded with a negligible, almost invisible longitudinal indentation. The skin color of fully mature fruit is dark blue (RHS103A-79A) with an intense gray cover (Fig. 1). The skin is thick and crispy. Flesh color is yellow green (RHS146A). The flesh is quite firm and has a juicy and pleasant fine texture. The small ovate stone is a little acute in both sides and is almost free. The stone average weight is 0.41 ± 0.01 g, its length is 1.88 ± 0.53 mm, and its width is 0.93 ± 0.01 mm. The fruit taste is very pleasant. The taste is slightly sour to sour sweet as the fruit ripens on the tree. The average peak of total soluble solids is 16.7% ± 0.5%. We did not detect any special aroma.

‘Shezifon’ is an early midseason maturing cultivar. The maturation time of ‘Shezifon’ coincides with ‘Santa Rosa’ and before ‘Laroda’ by almost 6 weeks. In Newe-Ya'ar, it matures in the beginning of July. Fruits do not drop when ripe, and ripened fruits can remain on the trees for up to 3 weeks. Shelf life is good. After 3–5 days on the shelf in room temperature, the fruit preserves its qualities (taste, firmness, and texture).

‘Shezifon’ was applied for registration under the terms of the Israeli Plant Breeders’ Right Law 5733-1973 (application number 3587/03). It was released for commercial usage in Israel in 2005. Non-indexed budwood is available from Newe-Ya'ar Research Center upon written request and under special contract through the commercial unit of the A.R.O. 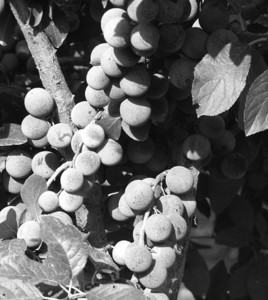