Preemergence herbicides are applied in the spring before soil temperatures become favorable for summer annual weed establishment (McCarty and Murphy, 1994). There is also potential for these herbicides to inhibit turfgrass root growth. Warm season grasses such as bermudagrass are vulnerable to root growth inhibition during spring root growth regeneration, which coincides with spring preemergence herbicide applications (Engel and Ilnicki, 1969).

Napropamide is an amide herbicide that is registered for use on warm-season grasses, including bermudagrass (Gowan Company, 2004). Napropamide effectively controls summer annual weeds when applied at 2.2 and 4.4 kg·ha−1 (a.i.) (Dernoeden et al., 1984). However, Johnson (1980) noted napropamide at 3.4 and 10.2 kg·ha−1 reduced root mass of ‘Tifgreen’, ‘Tifdwarf’, and ‘Tifway’ bermudagrass.

Turf was maintained at 3.2-mm mowing height and irrigated as needed to prevent plant wilt. Potash was applied at 48 kg·ha−1 (K) in late Apr. 2003 to help correct initial K deficiencies. Bermudagrass received weekly fertilizations of a greens-grade granular fertilizer (18N–1P–15K) at 12 kg·ha−1 (N) beginning the first week of May until mid-August in both years.

Herbicides were applied 3 Mar. 2003 and 1 Mar. 2004. Herbicides tested included bensulide, dithiopyr, napropamide, oxadiazon, oxadiazon plus bensulide, and pendimethalin. Because no preemergence herbicides are currently registered for ‘TifEagle’ bermudagrass, rates for ‘Tifgreen’ bermudagrass and creeping bentgrass putting greens were applied (Table 1). Sprayable formulations were applied with a single-nozzle CO2 sprayer delivering 700 L·ha−1. Granular formulations were applied with a shaker can. Turf was irrigated to ≈6-mm depth immediately after herbicide applications. ‘TifEagle’ bermudagrass was completely dormant when herbicides were applied in both years. Spring greenup was rated every 3 weeks after applications on a percent scale with 0% = dormant turf and 100% = complete green turf.

Herbicides and rates applied to TifEagle bermudagrass in field and greenhouse experiments. 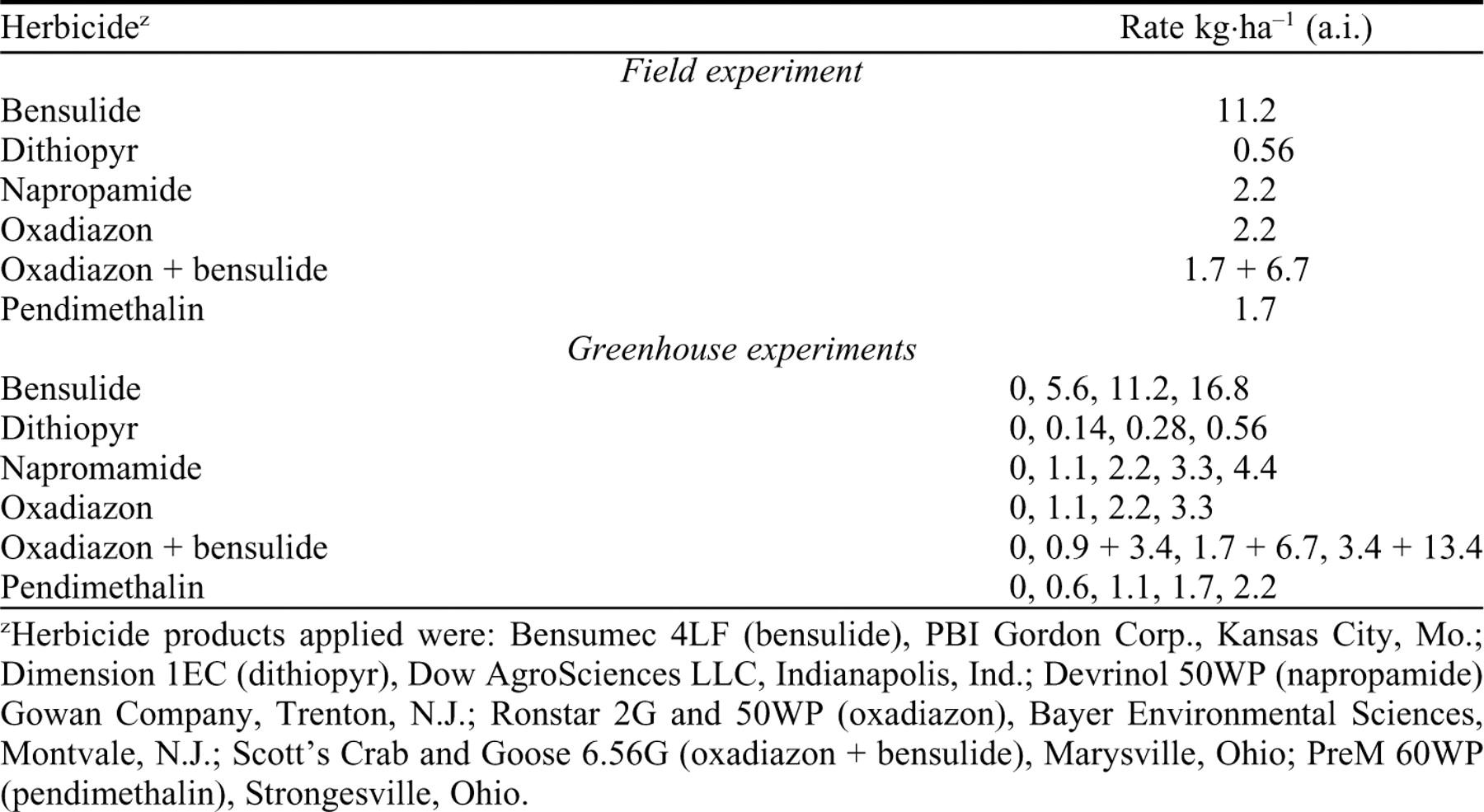 Two root samples were harvested per plot with a 5-cm diameter and 30-cm depth sampler on seven dates and backfilled with sand. Sampling dates were 21 Mar., 11 Apr., 5 May, 26 May, 16 June, 30 June, 18 Aug. in 2003 and 22 Mar., 12 Apr., 4 May, 24 May, 14 June, 5 July, and 11 Aug. in 2004. Roots were thoroughly washed to remove soil and organic matter over sieve screens that prevented loss of root fragments. Samples were oven dried at 80 °C for 72 h. The two samples per plot were pooled and data were subjected to analysis of variance with SAS General Linear Model procedure (SAS Institute, 1999). Mean separations were made with Fisher's protected least significant difference (lsd) test at α = 0.05.

Greenhouse experiments were performed at the Clemson University Greenhouse Research Complex, Clemson, S.C., from Jan. to Aug. 2003. Greenhouse day/night temperatures ranged from 26/20 °C. Sod was collected from the ‘TifEagle’ bermudagrass green at the Turfgrass Service Center, Clemson, S.C. Bermudagrass plugs were placed in pots with 15-cm diameters and 12-cm depth with an 85/15 (v/v) sand and peatmoss medium. A 9–18–17 starting fertilizer (N:P2O5:K2O; Scott's, Marysville, Ohio) was mixed into the soil at 48 kg·ha−1 (N). The fertilizer also contained Ca, Mg, and S at 4%, 2%, and 7%, respectively.

‘TifEagle’ bermudagrass was allowed to resume active growth for ≈2 weeks before treatments. Turf was irrigated and mowed with grass sheers (Black and Decker, Towson, Md.) at ≈4 mm 5 d·week−1. Weekly nitrogen inputs were applied with ammonium nitrate at 12 kg·ha−1 (N).

Each herbicide tested in field experiments was applied in separate experiments at four rates based on application rates for creeping bentgrass greens and ‘Tifgreen’ bermudagrass (Table 1). Herbicide applications were made at 720 L·ha−1 with a Devries (Hollandale, Minn.) Manufacturing sprayer model SB6–094. Experimental designs were randomized complete blocks with four replications and experiments were repeated for each herbicide. Blocks were rotated biweekly and experimental units rerandomized within.

Preliminary results from field experiments suggested ‘TifEagle’ bermudagrass tolerated oxadiazon plus bensulide and thus, greenhouse experiments investigated responses of five dwarf-type bermudagrass cultivars to the herbicide. Two experiments were conducted at the Clemson University Greenhouse Research Complex, Clemson, S.C., from Oct. to Nov. 2003 (Study 1) and Jan. to Feb. 2004 (Study 2). Greenhouse day/night temperatures were set for ≈26/20 °C. As a result of reduced lighting during winter months, supplemental lighting was added for ≈3 h/d at 50 μmol·m2·s−1. The experimental design was a randomized complete block with four replications of 10 containers per block. To help reduce light variability during winter months, blocks were rotated biweekly and experimental units rerandomized within. ‘TifEagle’ and ‘Champion’ bermudagrass sod was collected from putting greens at the Turf Service Center, Clemson, S.C., established in July 2002 and 2003, respectively. ‘Tifdwarf’ and ‘MiniVerde’ bermudagrass sod was obtained from American Turf in Duluth, Ga. ‘FloraDwarf’ bermudagrass sod was obtained from the University of Florida, Gainesville.

After transplanting sod to containers, turf was allowed to resume active growth before treatments. Oxadiazon plus bensulide (6.6G, 1.3% oxadiazon + 5.3% bensulide) was applied from a prepackaged combination at 1.7 + 6.7 kg·ha−1 (130 kg·ha−1 of product) to initiate the 8-week studies. Turf was irrigated and mowed with automatic grass sheers (Black and Decker, Towson, Md.) at 4 mm 5 d·week−1. Ammonium nitrate solution was applied weekly at 12 kg·ha−1 (N).

Turf quality was rated weekly on a 1 to 9 scale with 9 being dark green turf and 1 completely dormant turf. Ratings below 7 were considered unacceptable. Turf injury was evaluated on a percent scale basis, in which 0% = no injury and 100% = completely dead turf. Clippings were harvested 4 and 8 weeks after treatment (WAT). Roots were collected from entire containers at the 0 to 15 cm and 15 to 30-cm depths 8 WAT and were cut ≈2.5 cm below the thatch layer. Root length was determined to the nearest 1.3 cm by measuring the distance from where roots were no longer present in the soil profile to the top of the container. After harvestings, clippings and roots were oven-dried at 80 °C for 48 h and then weighed. Data were subjected to an analysis of variance with SAS General Linear Model procedure. Mean separations were based on Fisher's protected lsd test at α = 0.05. 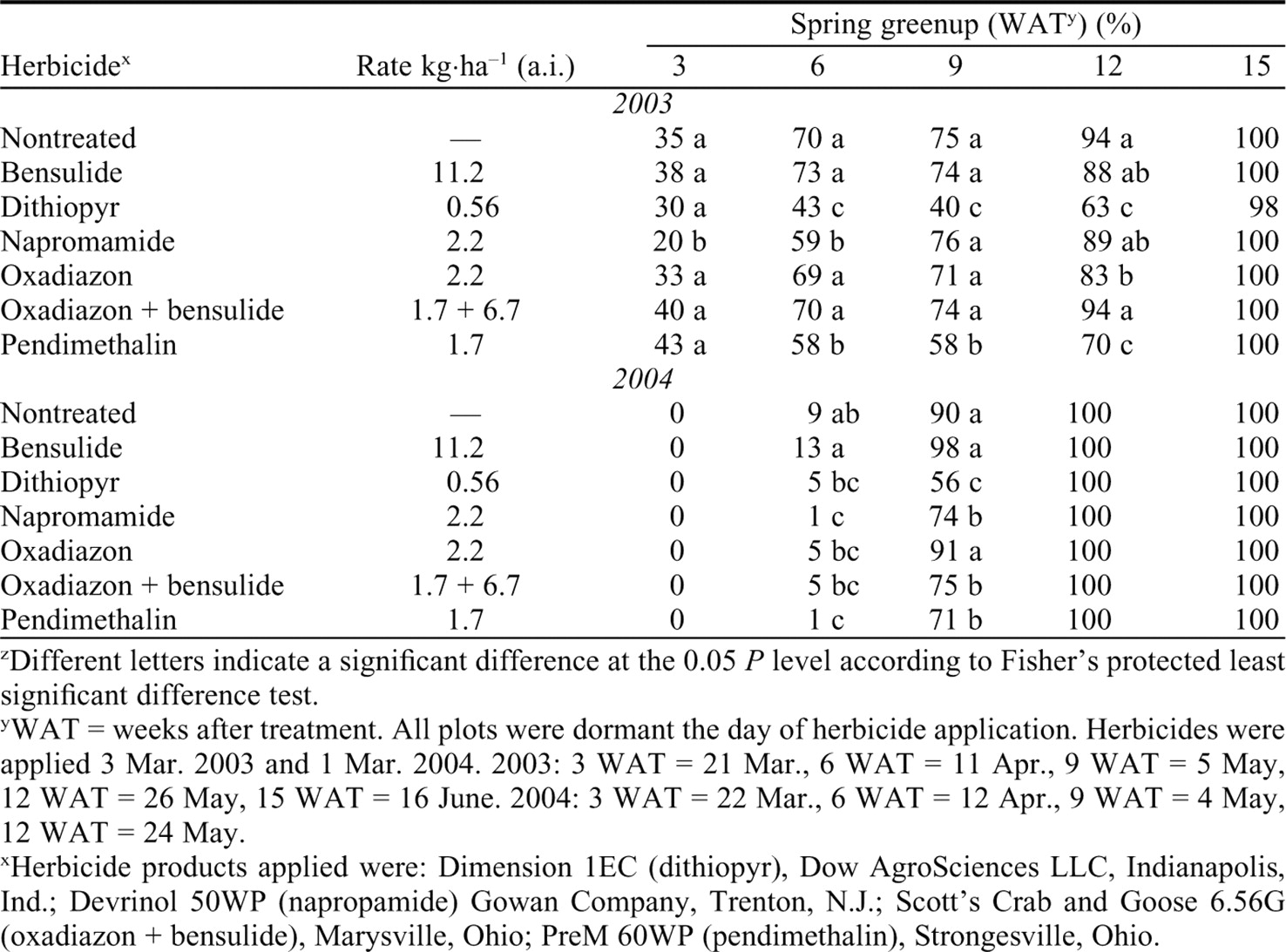 Sampling date-by-treatment interaction was not detected for root mass and thus results were pooled and presented by treatment (Table 3). All herbicides significantly reduced root mass compared with the nontreated; however, root loss with oxadiazon plus bensulide was considered acceptable (less than 20%). Bermudagrass root loss when treated with bensulide, dithiopyr, napropamide, oxadiazon, and pendimethalin ranged from 22% to 39% from nontreated. However, turf treated with oxadiazon alone had similar root mass as oxadiazon plus bensulide treatments.

From greenhouse experiments, ‘TifEagle’ bermudagrass root mass was reduced from nontreated by 19% to 37%, 30% to 33%, 4% to 26%, and 28% to 37% from bensulide, dithiopyr, napropamide, and pendimethalin, respectively (Fig. 1). Differences were not detected among formulations of oxadiazon (wettable powder versus granular), so results were pooled over formulations. Oxadiazon-treated turf had root mass reductions ranging 2% to 15% from nontreated turf, whereas oxadiazon plus bensulide reduced root mass 15% to 22%. From regression analysis, 20% root mass reductions occurred at 6.1, 0.09, 1.83, 2 + 7.8, and 0.86 kg·ha−1 (a.i.) from bensulide, dithiopyr, napropamide, oxadiazon plus bensulide, and pendimethalin, respectively (Table 4). ‘TifEagle’ bermudagrass root mass reductions from oxadiazon had no statistical relationship with rates but the 2× rate (4.4 kg·ha−1) had ≈20% reductions from that nontreated.

Results with oxadiazon applied to ‘TifEagle’ bermudagrass are consistent with previous research by Callahan and High (1990) who found minimal to no foliar injury during spring transition on ‘Tifgreen’ bermudagrass. Johnson (1976b, 1979) noted spring applications of oxadiazon at 3.4 and 4.5 kg·ha−1 did not affect quality or density of ‘Tifway’, ‘Tifgreen’, ‘Tifdwarf’, ‘Ormond’, or ‘Floraturf’ bermudagrass when maintained at 20 to 40-mm mowing heights, but injury was reported from fall applications. Applications of oxadiazon in May were reported not to injure ‘Tifway’, ‘Tifgreen’, or ‘Tifdwarf’ bermudagrass, whereas applications in early spring, summer, or fall reduced quality and density from that nontreated (Johnson, 1985).

In experiments comparing five dwarf bermudagrass cultivars, oxadiazon plus bensulide did not cause injury, reductions in turf quality, or reduce root length or root mass (data not shown) but cultivars varied significantly. ‘Tifdwarf’, ‘FloraDwarf’, and ‘MiniVerde’ had similar total root mass after 8 weeks, but compared with these cultivars, ‘Champion’ and ‘TifEagle’ had 36% and 88% less total root mass, respectively (Table 5). In field experiments, White (1998) noted ‘TifEagle’ had 63% and 56% less root mass compared with ‘Tifdwarf’ and ‘Champion’ bermudagrass, respectively, 4 months after establishment. ‘TifEagle’ bermudagrass was the only cultivar to have reduced root length and root mass from other cultivars. Herbicide treatment had no effect on clipping yield 4 WAT (data not shown), whereas only treated ‘TifEagle’ and ‘FloraDwarf’ bermudagrass had 32% and 25% reduced clipping yield 8 WAT from that nontreated, respectively.

In field experiments, ‘TifEagle’ bermudagrass showed the most sensitivity to mitotic inhibitors, bensulide, dithiopyr, napropamide, and pendimethalin. Regression analysis suggests significantly lower rates of these herbicides may have an acceptable margin of safety on dwarf bermudagrass, but further research should investigate efficacy for weed control and turf safety. Oxadiazon plus bensulide caused acceptable levels of root growth reductions (15%) in the field and did not reduce root mass of five dwarf bermudagrass cultivars in greenhouse experiments. Overall, oxadiazon or oxadiazon plus bensulide will likely be the only suitable preemergence herbicides for dwarf-type bermudagrass golf greens, whereas mitotic inhibitors used for higher-mowed bermudagrass cultivars and creeping bentgrass golf greens appear injurious. 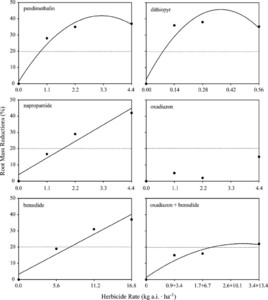