Blueberry acreage in the southeast United States has increased significantly during the last 5 years and continued expansion is expected for the foreseeable future (National Agricultural Statistics Service, 2007; Scherm et al., 2001; Williamson and Lyrene, 2004). This projected increase in acreage suggests that many growers will be planting new orchards with the goal of rapid, uniform plant establishment. One concern with the establishment of blueberry plantings is fruit set and development on young plants. Flower buds are typically removed from blueberry plants during the first year after planting (Pritts, 2006; Williamson et al., 2004; Yarborough, 2006). Current recommendations in many states call for hand removal of flowers or fruit of blueberry plants for the first one or two growing seasons after planting. This procedure is usually accomplished either by walking through the orchard and hand stripping flower buds after planting during the spring, or by heading back shoots having flower buds at the time of planting. These labor-intensive operations can be costly for growers during the establishment period when returns from the crop are minimal (Strik and Buller, 2004). The conventional reason given for removing flowers and fruit on young plants is to reduce plant stress that is associated with maintaining a crop load (Eck, 1988; Gough, 1994; Shutak and Marucci, 1966). However, there is limited research data available concerning effects of flower or fruit removal methods on young plants (Strik and Buller, 2004).

This research was conducted at the University of Georgia Blueberry Research Farm near Alapaha, Ga. Containerized (3.8 L) ‘Brightwell’ and ‘Climax’ rabbiteye blueberry plants were planted on raised beds with a spacing of 4.0 m (between rows) × 1.5 m (within row). The plants were irrigated and received typical care for newly planted blueberries, except for flower bud removal treatments. Four treatments were applied during the first year of establishment: 1) control having no flower bud removal; 2) hand stripping of flower buds after planting; 3) radical pruning of plants at planting, leaving two to three main stems cut to a height of 15 to 20 cm; and 4) application of a 1.25% hydrogen cyanamide (2.5% Dormex, Degussa Ag, Trostberg, Germany) spray (applied until runoff) to plants during stage 5 of bloom (Spiers, 1978). Treatments were applied to five-plant plots, and there were four replications of each treatment–cultivar combination arranged in a randomized complete block design.

Data collection consisted of measuring the growth index (GI) for each treatment in the fall of each year (1999–2001). The GI was determined as follows:

where, h is the height of plants (in centimeters), and w1 and w2 are the width of plants (in centimeters) perpendicular and parallel to the row respectively. Growth index measurements were made for the two center plants in each plot for a total of eight plants per treatment. Data were subjected to analysis of variance to determine treatment effects.

The effects of different flower bud removal methods on the GI are depicted in Fig. 1. There were no significant differences in responses to treatments between the cultivars, so data were pooled for analysis. The control treatment having flower buds left intact set a considerable fruit load the first year. The fruit load suppressed shoot growth during the spring to a degree, but adequate shoot growth resumed later in the growing season such that the GI was similar for all treatments at the end of the first season. Plants that were pruned or had the flower buds stripped by hand initiated rapid shoot growth during the spring of the first year, but again, by Fall 1999 no differences were observed among treatments. The hydrogen cyanamide application was intended to burn off flower buds without injuring the main stems and emerging shoots of plants. The application was successful, as observations revealed that more than 90% of the flower buds failed to open and set fruit, and rapid shoot growth was initiated in the spring. Some tips of shoots that were treated with the growth regulator were slightly burned, but this apparently did not cause a residual problem. By late summer, plants of all treatments were considerably uniform in growth. Similarly, the GI was not significantly different among treatments in Fall 2000 and Fall 2001.

Overall, shoot dieback was greatest for ‘Misty’ in Expt. 1, although the hydrogen cyanamide rate had no effect on this response variable. Several treatments, including the nontreated control, had more dieback than the hand-thinned treatment. In Expt. 2, shoot dieback increased linearly with increased hydrogen cyanamide concentration for both ‘Misty’ and ‘Santa Fe’. Early versus late sprays had no effect on amount of shoot dieback. Flower bud mortality was only measured in Expt. 2 and it increased linearly with increasing rates of hydrogen cyanamide. The late treatment application resulted in higher flower bud mortality levels than the early treatment for ‘Misty’ but not for ‘Santa Fe’.

Strik and Buller (2004), in a recent study with highbush, indicated removal of flower buds resulted in better growth. In fact, they found that root dry weight was decreased by 42% as a result of early cropping. They also found that plants allowed to fruit the first year had less flower buds after year 2 than plants that had flower buds removed. However, they indicated that there was a significant and valuable economic yield produced on the early cropped plants, perhaps offsetting the reduced growth.

In the current study with rabbiteye blueberries, yield and flower bud numbers were not measured. The GI, however, did not differ among treatments after the first spring, and observations suggested little residual effect from early cropping. However, the effects of early cropping on the growth of southern highbush blueberry appear to be cultivar specific. Dry weights of many plant organs were greater for ‘Misty’ plants in which flowers were removed either by hand or by application of hydrogen cyanamide. No effects on plant or organ dry weights were found for ‘Santa Fe’. Perhaps cultivars that fruit heavily and lack vigor (such as ‘Misty’) respond to flower bud removal, whereas cultivars with lighter fruiting tendencies, or with naturally high levels of vigor, do not. Nevertheless, if there are concerns from stressing blueberry plants via early cropping, any of the flower removal treatments used seemed effective. Hydrogen cyanamide appears to have potential as an alternative labor-saving method for removing flower buds in newly established blueberries. However, it should be noted that at present the Dormex label does not support, and even prohibits, use of Dormex for blossom thinning. 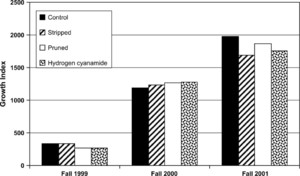