Although hundreds of H. macrophylla cultivars were bred in Europe in the early 20th century (Bertrand, 2001; Haworth-Booth, 1984; van Gelderen and van Gelderen, 2004), little scientific literature exists related to breeding and genetics of this or related species. In particular, only a few cytological studies have been conducted in Hydrangea L. Chromosome number within the genus ranges from 2n = 2x = 30 in H. involucrata Sieb. to 2n = 4x = 72 or 2n = 6x = 108 in H. paniculata Sieb. (Funamoto and Tanaka, 1988). Asiatic species have significantly larger genomes than North and South American species (Cerbah et al., 2001; Zonneveld, 2004). For example, the Asiatic species H. involucrata (2n = 2x = 30) has approximately twice the nuclear DNA content of the American species H. arborescens (2n = 2x = 38) although both are diploid species (Zonneveld, 2004). A considerable difference in chromosome size between these two species was strikingly apparent in their hybrid (Jones and Reed, 2006).

Information on ploidy level of specific H. macrophylla cultivars will help in selecting parents for both intra- and interspecific hybridizations. The objective of this study was to evaluate ploidy in a diverse group of H. macrophylla cultivars. Ploidy was first estimated using flow cytometry and then confirmed in selected diploid and triploid plants using chromosome counts. The potential for using stomatal guard cell length and pollen grain size to identify ploidy level of H. macrophylla plants was also examined. Finally, fertility of triploid cultivars was estimated through pollen staining and controlled pollinations.

Cuttings were taken in Summer 2005 from a single plant each of 75 H. macrophylla cultivars, including 61 members of H. macrophylla ssp. macrophylla and 14 members of H. macrophylla ssp. serrata, growing at the Tennessee Nursery Research Center, McMinnville, Tenn. Cuttings were dipped for 5 s in 4.9 mm indole-3-butyric acid in 50% ethanol, stuck into 4 pine bark : 1 peatmoss (by volume), and placed under mist in a greenhouse. One rooted cutting of each cultivar was used for the flow cytometric analysis. Another rooted cutting of each cultivar was overwintered in an unheated greenhouse and used for pollen measurements in Spring 2006. A third rooted cutting of six cultivars was used for chromosome counts. Stomatal measurements were made on leaf tissue collected from the original plant.

Flow cytometric measurements of nuclear DNA quantity were made from all 75 cultivars listed in Table 1. Approximately 0.5 cm2 of growing leaf tissue of sample and standard were chopped for 30 to 60 s in a plastic petri dish containing 0.4 mL extraction buffer (Partec CyStain ultraviolet precise P Nuclei Extraction Buffer; Partec GMBH, Münster, Germany). The resulting extract was passed through a 30-μL filter into a 3.5-mL plastic tube to which was added 1.6 mL Partec CyStain ultraviolet precise P Staining Buffer containing the fluorochrome DAPI. The relative fluorescence of the total DNA was measured for each nucleus using a Partec PA-1 ploidy analyzer (Partec GMBH). For each sample, at least 3000 nuclei were analyzed revealing a single peak with a coefficient of variation (cv) less than 4.9%. Genome sizes were calculated as nuclear DNA content for unreduced tissue (2C) as: 2C DNA content of tissue = (mean fluorescence value of sample ÷ mean fluorescence value of standard) × 2C DNA content of standard. Pisum sativum L. ‘Ctirad’ with a 2C content of 9.09 pg (Doležel and Bartoš, 2005) was used as the internal standard.

Based on flow cytometric results, three diploid and three triploid ssp. macrophylla cultivars were chosen for chromosome counts. Root tips were collected from actively growing plants immersed in 0.1 mm colchicine for 3 h at room temperature (20 °C), rinsed in distilled water, and fixed in a solution of 95% ethanol:chloroform:acetic acid (6:3:1, v/v/v) for 24 h at room temperature. Root tips were transferred to 70% ethanol and stored at −20 °C until needed. Before examination, root tips were hydrolyzed in 5 N HCl for 7 min, rinsed with distilled water, and soaked in 1% aceto-carmine for 20 min. The meristematic region of the root tip was squashed in aceto-carmine and chromosomes counted. Chromosome counts were made from five metaphase cells for each of the six cultivars examined.

Based on flow cytometric results, five diploid and five triploid H. macrophylla ssp. macrophylla cultivars were selected for stomatal measurements. The first pair of fully expanded leaves from mature plants growing under 63% shadecloth was collected in Oct. 2005. Epidermal peels from the abaxial surface of the leaves were placed on microscope slides along with a drop of distilled water. Stomata were observed at 200× magnification and stomatal guard cell length measured using an ocular micrometer. Twenty stomata were measured on each of two leaves per cultivar. Statistical comparisons of stomatal guard cell length between diploid and triploid cultivars were made using a t test.

Pollen was collected from greenhouse-grown plants between 19 May and 7 June 2006. With the exception of nine cultivars that did not flower in Spring 2006, pollen measurements were made on all cultivars for which ploidy had been determined through flow cytometry the previous year. On the day of anthesis, three anthers from a single flower were placed on a glass slide and squashed in a drop of 1% aceto-carmine. Digital images of three fields of view, each having ≈100 to 200 pollen grains, were made from each slide using an Olympus BX-60 microscope equipped with an Olympus DP-70 digital camera (Olympus America, Melville, N.Y.). For each cultivar tested, three flowers were examined. Using the digital images, the diameter of 50 pollen grains from each flower was measured using MicroMeasure software, ver. 3.3 (Reeves and Tear, 2000). The frequency distribution of pollen grain size, in 0.3-μm increments, was plotted for all diploid cultivars.

As part of an ongoing H. macrophylla breeding program, controlled pollinations were made during Summer 2004 and 2005. Although triploid cultivars were used in some of these pollinations, they were chosen as parents without knowledge of their ploidy level. Data from pollinations involving cultivars later found to be triploids were analyzed for the following: percent pollinations producing seed, mean number of seed per successful pollination, and percent seed germination. Previously published pollination and seed germination procedures were used (Jones and Reed, 2006; Reed, 2005). 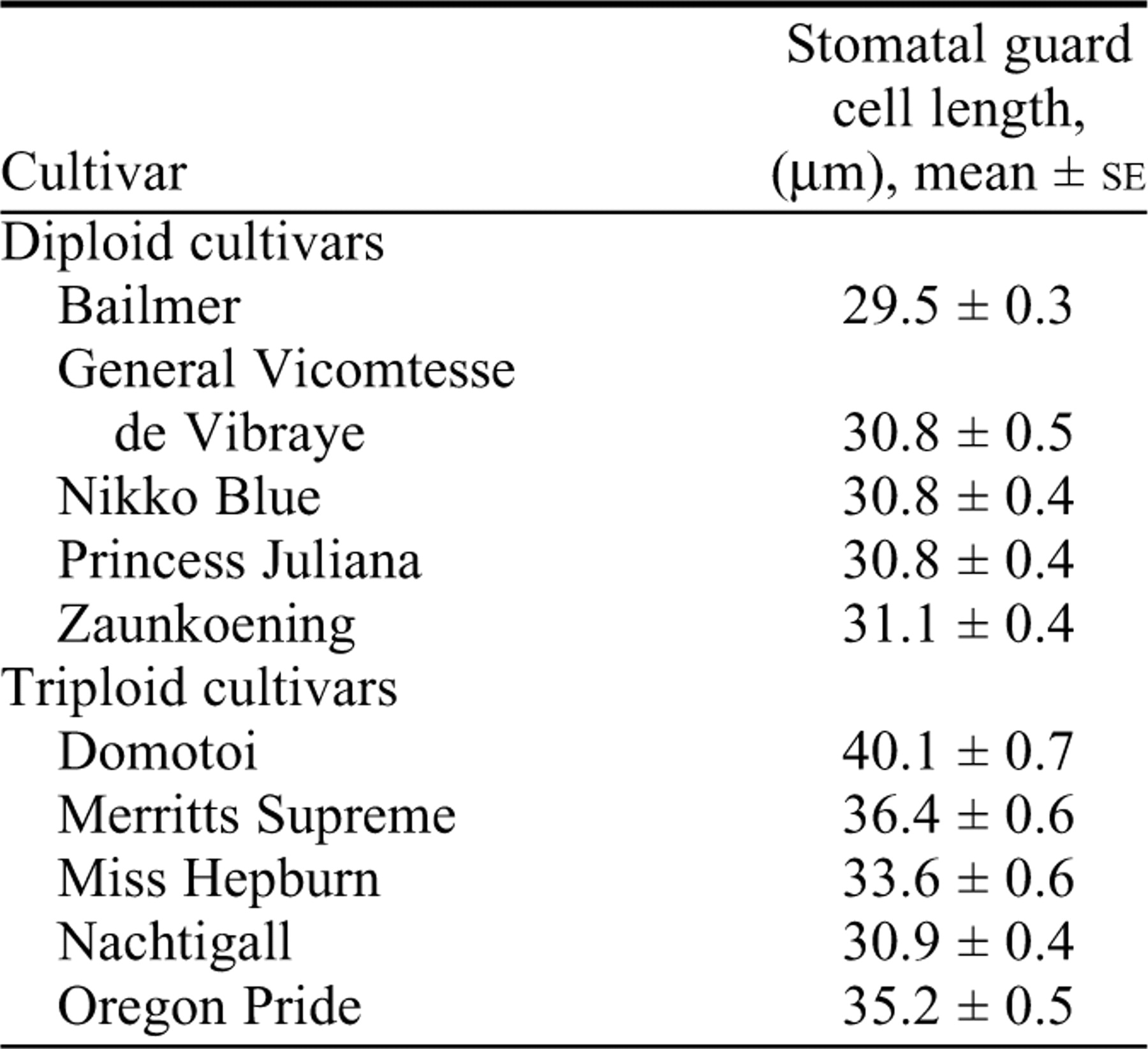 Pollen staining estimates of fertility may not be accurate because not all stainable grains may actually be viable. However, results of controlled pollinations confirmed partial fertility in five of six H. macrophylla ssp. macrophylla triploid cultivars. Only ‘Merritt's Supreme’ failed to produce viable seed when crossed to a diploid H. macrophylla ssp. macrophylla cultivar (Table 3). Viable seed were obtained when ‘Blaumeise’, ‘Kardinal’, ‘Marechal Foch’, and ‘Nachtigall’ were used as pistillate or staminate parents, whereas ‘Taube’ produced seed only when it was used a pistillate parent. Comparisons between cultivars and negative results presented in Table 3 should be viewed with caution because, with the exception of ‘Kardinal’, none of the triploids were crossed to more than two diploid cultivars.

With the exception of ‘Domotoi’, an old Japanese cultivar that may have been selected from the wild, the other triploids identified in this study were the result of breeding efforts (Haworth-Booth, 1984; Mallet, 1994; Mallet et al., 1992; van Gelderen and van Gelderen, 2004). Several triploids were produced by the same breeders. Two German breeders, H. Schadendorff and F. Matthes, were responsible for six triploid cultivars, whereas another six were released by the Federal Research Institute for Horticulture in Switzerland (Mallet, 1994; van Gelderen and van Gelderen, 2004). It is not known whether these and other European breeders had access to tetraploid forms of H. macrophylla that were not included in previous ploidy analyses (Cerbah et al., 2001; Demilly et al., 2000; Zonneveld, 2004) or if they were using parental stocks that produced unreduced gametes. An additional possibility, considering the fertility of the triploids, is that a triploid parent may have been used in the breeding of additional triploids.

The most direct method of screening for unreduced pollen grains is the examination of the range of pollen sizes produced by an individual (Bretagnolle and Thompson, 1995). The presence of “giant” pollen has been associated with 2n status and has been used as an indicator of unreduced gamete formation. The frequency distribution of pollen grain size among diploid cultivars in this study was examined for evidence of unreduced gamete production. Pollen size distribution patterns were similar in all H. macrophylla spp. serrata and most diploid H. macrophylla ssp. macrophylla cultivars. These cultivars exhibited a range of pollen grain sizes that peaked at or near the mean value, but most produced a few grains considerably larger than the mean size (Fig. 2). The only cultivar that deviated substantially from this pattern was ‘Trophee’, which displayed a bimodal distribution. In Solanum L. and Dactylis L., a bimodal distribution of pollen size frequencies was associated with 2n pollen production (Quinn et al., 1974; van Santen, 1988). Analysis of microsporogenesis in ‘Trophee’ is needed to determine whether the large pollen grains observed in this cultivar represent unreduced gametes. 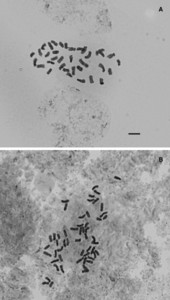