Thomas H. Boyle III, Professor in the Department of Plant, Soil, and Insect Sciences at the University of Massachusetts, died on December 19th at the age of 53 following a heroic struggle with renal cancer. He joined the faculty in 1986 after receiving an M.S. and Ph.D from the University of Maryland. His B.S. degree in Horticulture was awarded in 1977, from Virginia Polytechnic Institute & State University. For the past 20 years Thomas managed a research program in plant genetics and breeding in the field of ornamental horticulture. His work was both applied and basic and resulted in 46 refereed scientific papers, numerous book chapters, and many patented plants. He also served as an associate editor for HortScience from 2001 to 2003. He may be most recognized for his work with interspecific hybrids of Zinnia which led to the powdery mildew resistance of modern zinnias and as a world authority on the genetics of Schlumbergera. Thomas' research was precise, well thought out, and based on his great understanding of past literature. He was also an excellent teacher and taught and cotaught numerous courses such as greenhouse management, bedding plants, and many breeding, genetics, and biotechnology courses. His open office policy allowed both colleagues and students alike to share his extensive knowledge. Many students changed career paths because of his advice and through respect of him as a role model. I went to graduate school with Thomas and was on the faculty with him at the University of Massachusetts until recently. His professional accomplishments speak for themselves. As a person, he had a broad sense of humor, a love of life, travel, music, cultures, food, and of course plants. At his memorial service his father commented that Thomas was always fascinated with nature and it was inevitable that he would try to explain it. Even near the end, Thomas continued to mentor his students, move forward with his research, and remain optimistic and dedicated. He will be missed greatly by his colleagues, one of which likened his passing to the burning down of a library. I will remember his contagious laugh, his brilliance, his dedication, his bravery, and his love and devotion to his wife and young son. He was taken too soon but will remain with us in many ways. 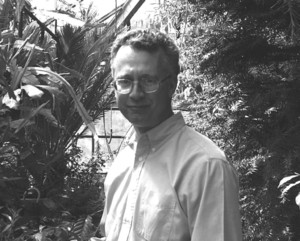