‘Cascade Bounty’ is a new floricane fruiting red raspberry (Rubus idaeus L.) jointly released by Washington State University (WSU), Oregon State University, University of Idaho, and the U.S. Department of Agriculture–Agriculture Research Service. ‘Cascade Bounty’ has been noted for high levels of root rot tolerance and high yields of mid- to late-season fruit on sites with severe root rot infestations. The fruit is tart, bright colored, medium size, and rounded in shape. The fruit of ‘Cascade Bounty’ machine harvests well, but the fruit does not appear to have sufficient cohesion to be suitable for individually quick frozen (IQF) processing. ‘Cascade Bounty’ is recommended for machine harvesting for processing uses. The name Cascade was selected to reflect the region where this cultivar was developed.

‘Cascade Bounty’ was selected from a cross of WSU 984 and ‘Chief’ (Fig. 1) made in 1992 at WSU Puyallup Research and Extension Center (WSU Puyallup). ‘Chief’ was released from the University of Minnesota in 1930 (Brooks and Olmo, 1972). ‘Chief’ is noted as being very winter hardy, and both parents of ‘Chief’ are ‘Latham’, which is known for being highly root rot tolerant (Jennings, 1988). WSU 984 was very productive at WSU Puyallup in the 1990 and 1991 harvest seasons. In previous trials at WSU Puyallup, ‘Chief’ was noted for having a rounded fruit shape, and WSU 984 was noted for having a very long, conic fruit. The seedlings from the crosses that year were planted in a field with high levels of root rot. As a seedling, ‘Cascade Bounty’ was very vigorous and productive. It was selected in 1995 and evaluated as WSU 1162.

Fruit of ‘Cascade Bounty’ was harvested from replicated plantings at WSU Puyallup planted in 1996 and 2000. Plantings were arranged in randomized complete-block designs, with three three-plant replications, with 0.9 m between plants and 2.4 m between rows. Fruit was harvested one or two times a week, depending on environmental conditions and the weight of sound fruit and fruit with rot determined at each harvest. The average fruit weight for the season is a weighted mean based on the weight of a randomly selected 25 fruit subsample from each plot from each harvest and the yield for each harvest. Fruit firmness was measured as the force required to close the opening of the fruit using a Hunter Spring Mechanical Force Gauge (Series L; Ametek, Hatfield, Pa.), and was calculated as a weighted mean based on a randomly selected five-fruit subsample from each plot from each harvest.

Fruit samples of ‘Cascade Bounty’ were compared with ‘Cascade Delight’, ‘Meeker’, and ‘Willamette’ for pH, titratable acidity, soluble solids, and total anthocyanins. The pH of the juice was measured with a Corning 430 pH meter (Corning, N.Y.), titratable acidity by titration to pH 8.1 with 0.1 n NaOH, soluble solids with a Goldberg T/C refractometer (American Optical, Buffalo, N.Y.), and the total anthocyanins as described by Torre and Barritt (1977).

Harvest variables analyzed were total yield, percent fruit rot, individual fruit weight, midpoint of harvest, and length of harvest season. Only ‘Cascade Bounty’, ‘Cascade Dawn’, ‘Malahat’, ‘Meeker’, ‘Tulameen’, and ‘Willamette’ were in both plantings, and some cultivars died between the first and second fruiting season. Because of the different cultivars included in the plantings, and the differences in surviving cultivars from year to year, each planting and harvest season was analyzed separately. Data were analyzed as a randomized block design using General Linear Models (GLM) and Tukey's “Studentized” range test Honest Significant Difference (HSD) for mean separation (SAS 8.1; SAS Institute, Cary, N.C.). Other data were analyzed as a randomized block design using analysis of variance and Duncan's multiple range test for mean separation (SAS 8.1).

Yield, fruit weight and firmness, and harvest season for ‘Cascade Bounty’ and seven other raspberry cultivars planted in 1996 at Puyallup, Wash., in a replicated trial and harvested in 1998 and 1999.z 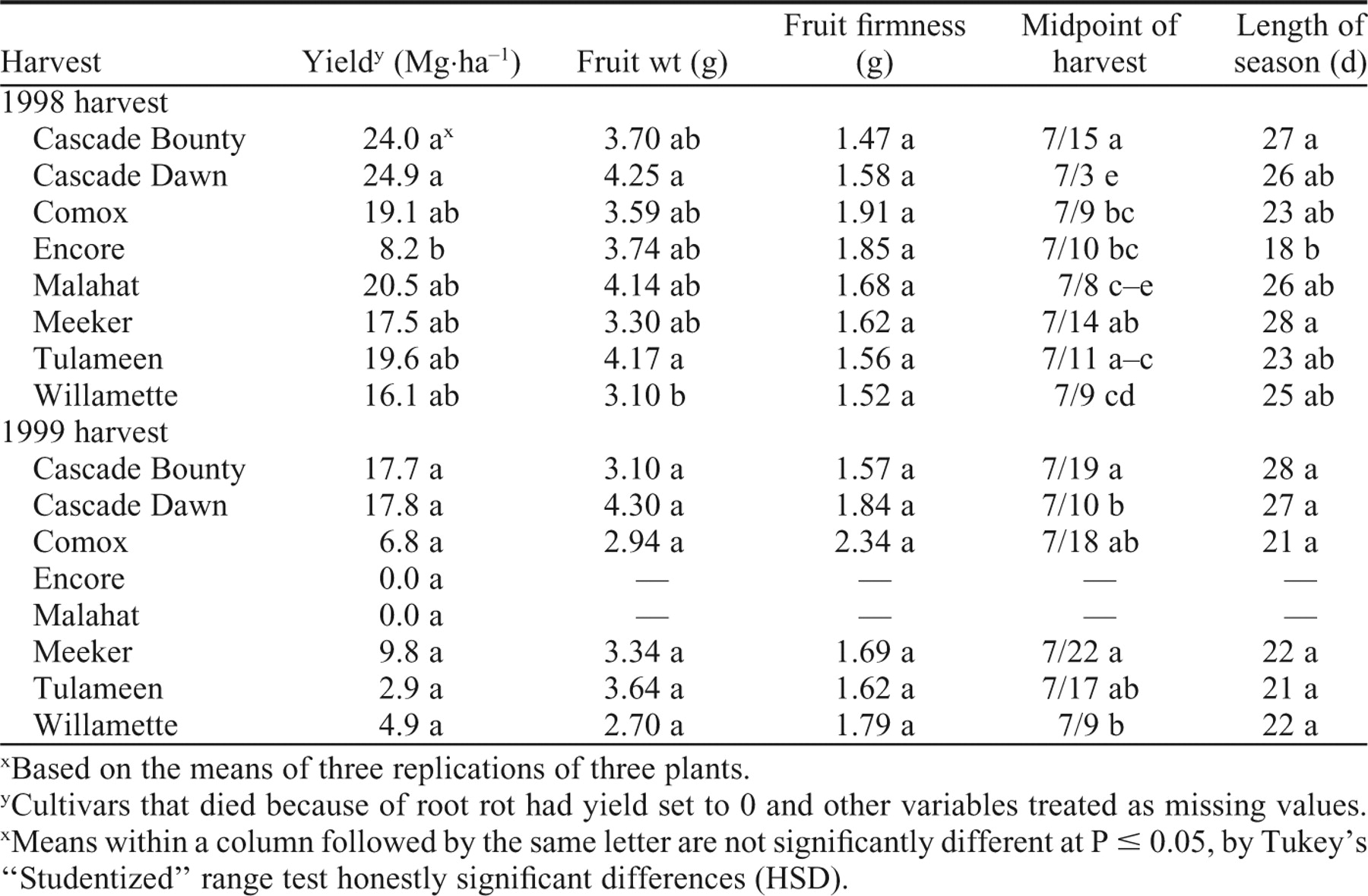 Yield, fruit weight, and firmness per harvest season for ‘Cascade Bounty’ and 10 other raspberry cultivars, planted in 2000 at Puyallup, Wash., in replicated trial and harvested in 2003 and 2004.z 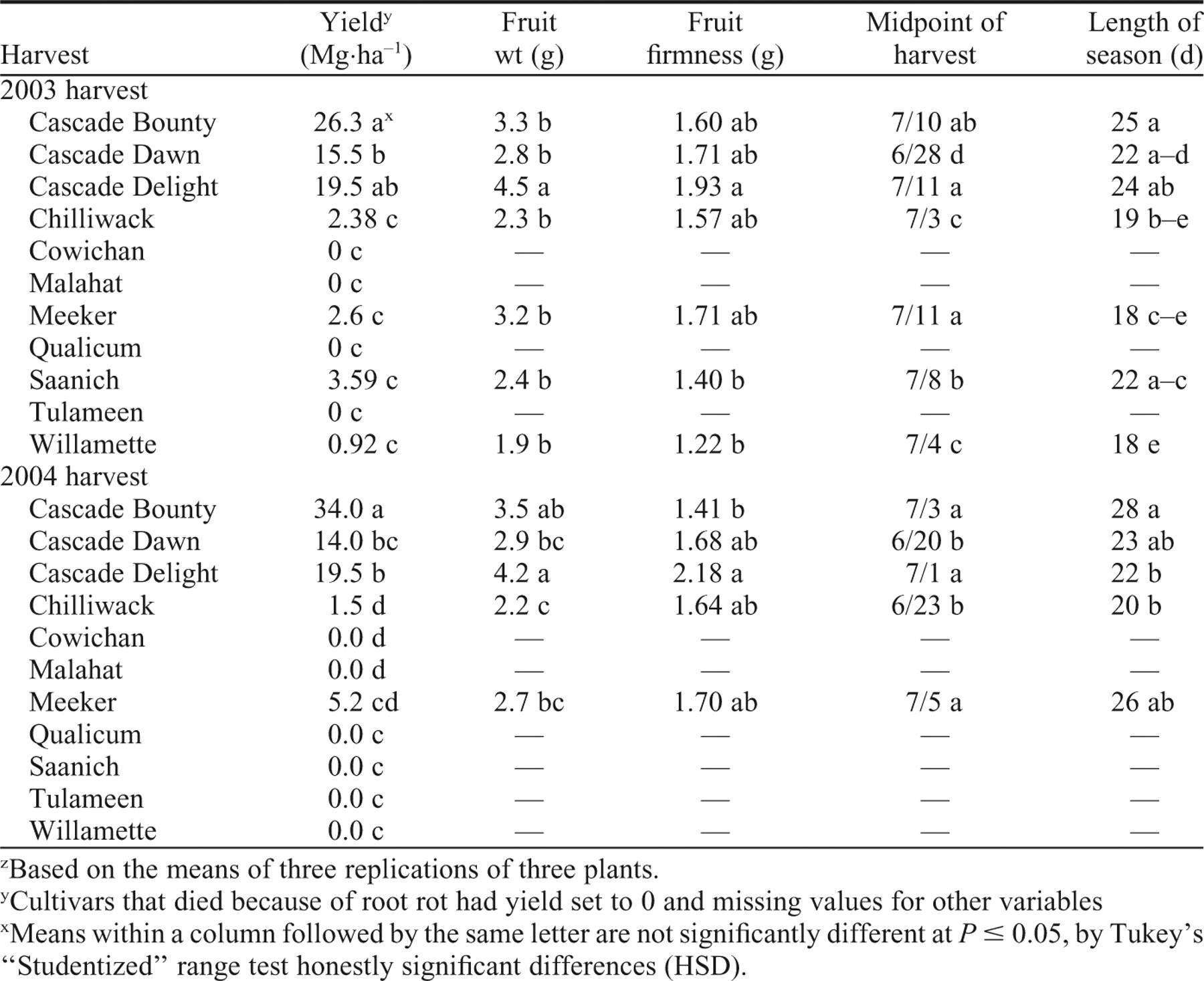 ‘Cascade Bounty’ performed well in a planting established in 2000 at Oregon State University North Willamette Research and Extension Center, Aurora, Ore. ‘Cascade Bounty’ had high yields in 2002 and 2003, and the average yield (26.9 Mg·ha−1) was not significantly different from the highest yielding cultivar ‘Esquimalt’ (14.9 Mg·ha−1) or ‘Meeker’ (11.7 Mg·ha−1). Fruit size was similar between ‘Cascade Bounty’ (3.4 g) and ‘Meeker’ (3.5 g; data not shown). 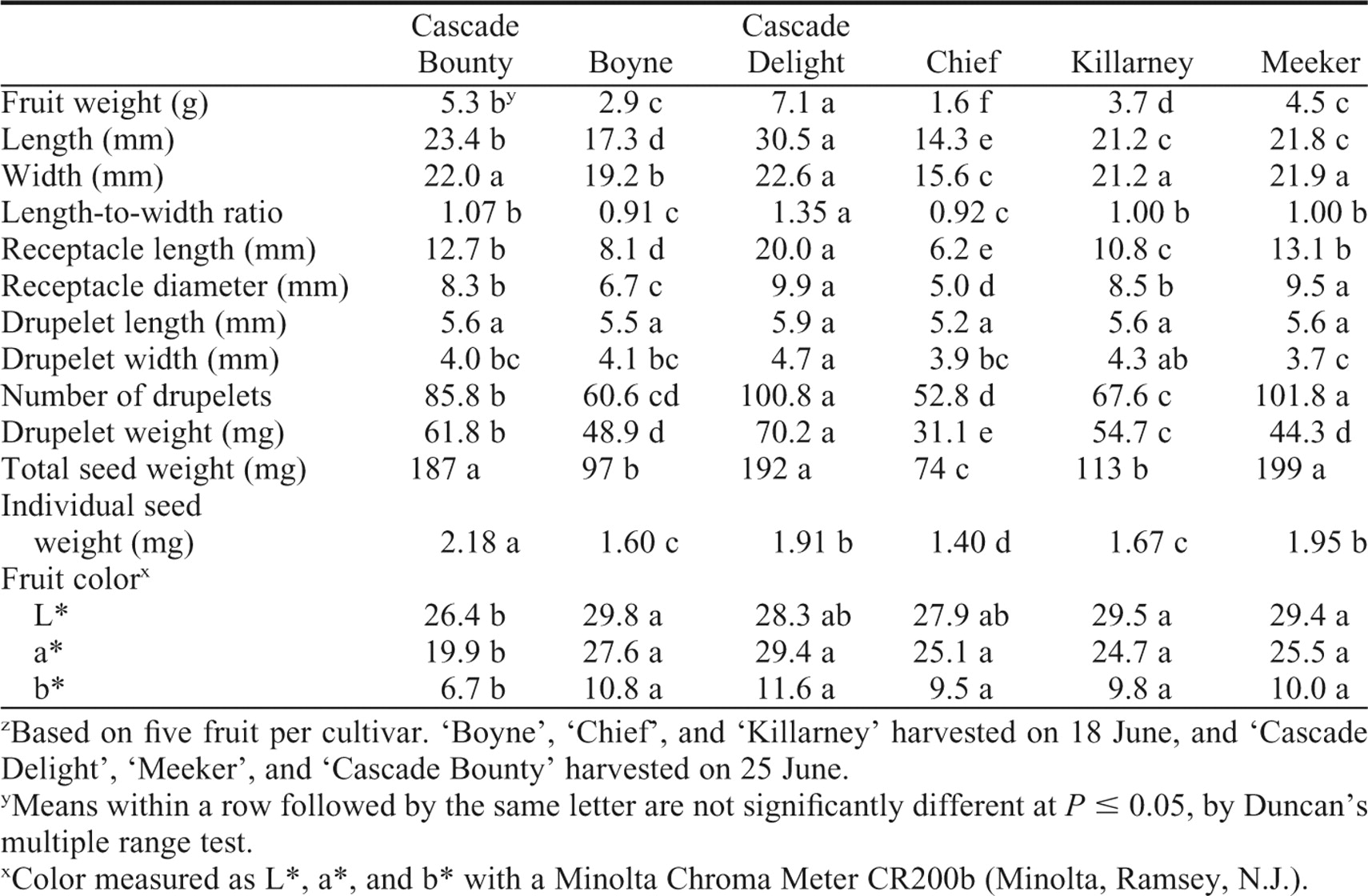 At about 30 cm in height the canes had 20 to 40 spines/cm of cane. The spines are straight and point toward the base of the canes. There are pigmented spots at the base of the spine that are the same color or slightly lighter than the spines. The spine color is similar to ‘Meeker’ and lighter than ‘Cascade Delight’. The midwinter color of the canes is similar to those of ‘Cascade Delight’, but canes of ‘Cascade Bounty’ commonly have high levels of waxy bloom on the canes. The waxy bloom makes the canes have more of a gray/purple cast. The canes are glabrous.

Morphological characteristics of the primocane leaves of six red raspberry cultivars measured at a 1.2-m height on 19 June 2003 in Puyallup, Wash.z 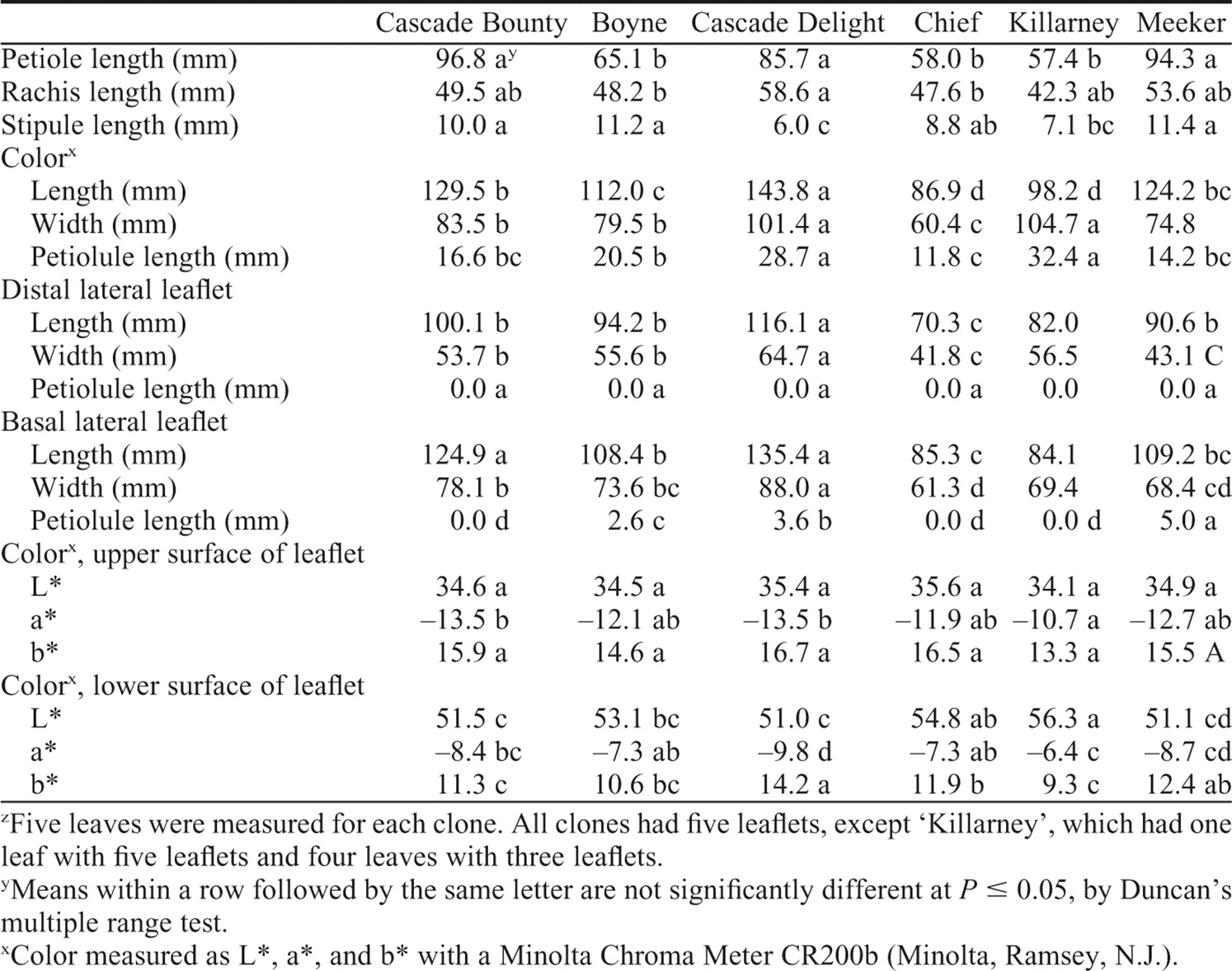 Names of propagators with certified ‘Cascade Bounty’ plants will be supplied on request. The Washington Agricultural Research Center does not have plants for sale. Plant patent protection will be sought for ‘Cascade Bounty’.

Pedigree of ‘Cascade Bounty’ raspberry. SHRI 7331–1 is a selection from the Scottish Horticultural Research Institute. 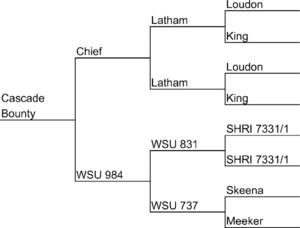 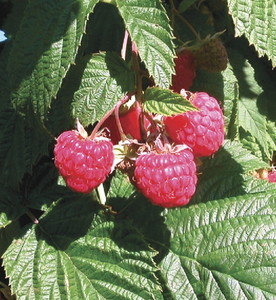