Mesotrione is currently being evaluated for use in turfgrass. Mesotrione inhibits p-hydroxyphenylpyruvate dioxygenase (EC 1.13.11.27), a precursor to plastoquinone and tocopherols (Mitchell et al., 2001; Pallett et al., 1998; Secor, 1994). The predominant symptom of mesotrione activity is tissue whitening with subsequent plant necrosis. Whitening is attributed to a decrease in carotenoid production resulting from decreased phtytoene desaturase activity. Mesotrione is an indirect inhibitor of phytoene desaturase because plastoquinone serves as a cofactor for phytoene desaturase, the first step in the carotenoid synthesis pathway converting phytoene to ζ-carotene and successive carotenoids. The lack of tocopherols also contributes to plant death through a decrease in buffering capacity to reactive oxygen species (Matringe et al., 2005).

Some turfgrass species have been reported to have tolerance to mesotrione. Mesotrione applied at 0.44 kg·ha−1 injured Kentucky bluegrass less than 25% 8 weeks after treatment and controlled crabgrass (Digitaria spp.) more than 80% 8 weeks after treatment (Beam et al., 2004). Sequential applications of mesotrione at 0.14 kg·ha−1 applied at seeding and 4 weeks after seeding (WAS) of tall fescue controlled crabgrass species more than 90% with tall fescue cover exceeding 90% 22 WAS (Askew et al., 2003). In comparison, tall fescue groundcover was 15% to 35% less than the nontreated at 22 WAS when treated with quinclorac applied at 0.84 kg·ha−1 at seeding or 0.84 kg·ha−1 at seeding followed by (fb) 0.42 kg·ha−1 4 WAS (Askew et al., 2003). Tall fescue has also been reported to be more tolerant than Kentucky bluegrass, red fescue, and perennial ryegrass to the p-hydroxyphenylpyruvate dioxygenase-inhibiting herbicide isoxaflutole (Bhowmik and Drohen, 1998).

Research was conducted at the East Tennessee Research and Education Center–Plant Sciences Unit in Knoxville, Tenn., in 2004, 2005, and 2006. Two separate experiments were conducted to assess turf-type tall fescue tolerance to mesotrione. Expt 1. evaluated single and sequential postemergence applications of mesotrione versus quinclorac (multiple application study). Expt. 2 evaluated tall fescue establishment as effected by timing of mesotrione applications (timing study). The multiple application study was conducted as five separate trials over a 3-year period, whereas the timing study was conducted as four separate trials over a 2-year period. Seeding dates, soil types, and cultivars used are presented in Table 1. The seeding date for Fall 2005 was delayed as a result of irrigation repairs during September. Although seeding turf-type tall fescue in October is not optimum, it is not uncommon in Tennessee.

All field preparation and cultural practices were kept consistent for all experiments. Previous vegetation was killed with two applications of glyphosate (2.2 kg·ha−1) applied 8 and 3 weeks before seeding. Soil was tilled to a 25-cm depth and disked until the seedbed was smooth and fine. Soil was cultipacked to firm the soil, dragged with a harrow rake to remove dead vegetation, and further firmed by rolling with a smooth roller.

Both experiments were seeded with turf-type tall fescue at 293 kg·ha−1 pure live seed. For Spring 2006 experiments, ‘Kittyhawk’ tall fescue was unavailable locally; therefore, ‘Falcon II’ was used. Starter fertilizer (6N–10.5P–9.9K) was applied at a rate of 200 kg·ha−1. Seeds were broadcast-applied in two directions to ensure uniformity, lightly dragged with a leaf rake in two directions, rolled with a smooth roller to provide further firming, and covered with a germination blanket (A.M. Leonard, Piqua, Ohio). Trials were irrigated twice daily with ≈0.5 cm of water to maintain adequate surface moisture for germination. The germination blanket was removed at 14 d after seeding (DAS). In all cases, seed emerged 7 (±1) DAS.

For the timing study, herbicide treatments were made at seeding, 7, 14, or 28 DAE. Two mesotrione rates, 0.14 and 0.28 kg·ha−1, were evaluated at each application timing. At seeding, applications were made after seeding and the final rolling occurred but before the germination blanket was placed. All mesotrione treatments contained 0.25% v/v nonionic surfactant.

Data were subjected to analysis of variance (P = 0.05). Injury ratings for nontreated plots were not included in the analysis as a result of decreased potential heterogeneity of variance. For the multiple application study, separate trials were analyzed as separate environments and the treatment-by-environment interaction was used as the error by which the treatment effect was tested (McIntosh, 1983). Means were separated using Fisher's protected least significant difference. For the timing study, data were analyzed as a two (herbicide rate) by four (application timing) factorial arrangement, in which the rate by timing within year effect was used as the error component. A pairwise contrast was conducted to evaluate the effect of mesotrione rate, whereas orthogonal contrasts were conducted to evaluate the effect of herbicide timing (Steele et al., 1997). Fisher's protected least significant difference is presented as a means of making all possible comparisons and comparison with the nontreated, but these are not meant to supercede preplanned contrasts. 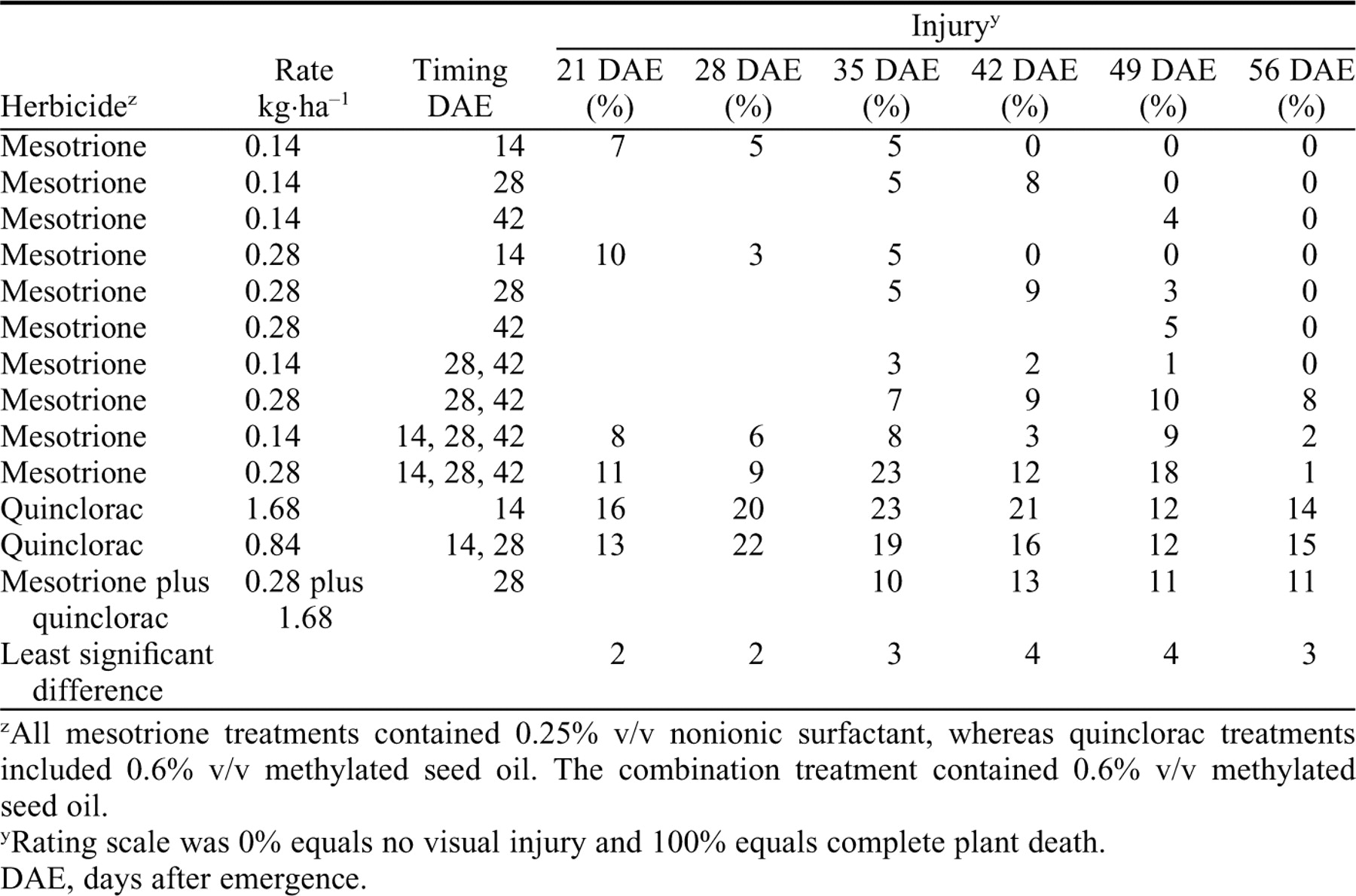 Injury from quinclorac treatments persisted longer than a single application of mesotrione (Table 2). Quinclorac at 1.68 kg·ha−1 applied 14 DAE injured tall fescue 20% or more for up to 28 DAA (42 DAE), whereas injury symptoms from mesotrione single applications did not persist longer than 21 d, at which time they were 5% or less. A sequential application of quinclorac at 0.84 kg·ha−1 applied 14 and 28 DAE resulted in less injury to tall fescue 35 and 42 DAE than a single application at 1.68 kg·ha−1 applied 14 DAE. Although these injury symptoms were observed, quinclorac at 1.68 kg·ha−1 is twice the recommended label rate and it is not recommended that quinclorac be applied with a surfactant until 28 DAE (Anonymous, 2004). Woznica et al. (2003) reported limited reduction in green foxtail [Setaria viridis (L.) P. Beauv.] growth when quinclorac was applied without surfactant. The inclusion of an adjuvant, primarily methylated seed oil, is necessary for proper absorption of the herbicide (Enloe et al., 1999; Woznica et al., 2003; Zawierucha and Penner, 2001). Quinclorac injury observed in our research was epinasty and vertical growth cessation. Quinclorac did not induce any chlorotic or necrotic symptoms.

An experiment by treatment effect was observed for tall fescue groundcover at all rating dates (Table 3). By sorting the data by experiment, analysis revealed differences in Fall 2005 data from other location data; therefore, Fall 2005 data were analyzed separately and all other locations were pooled. An overall decrease in groundcover was observed in Fall 2005, primarily attributed to the delayed seeding date. 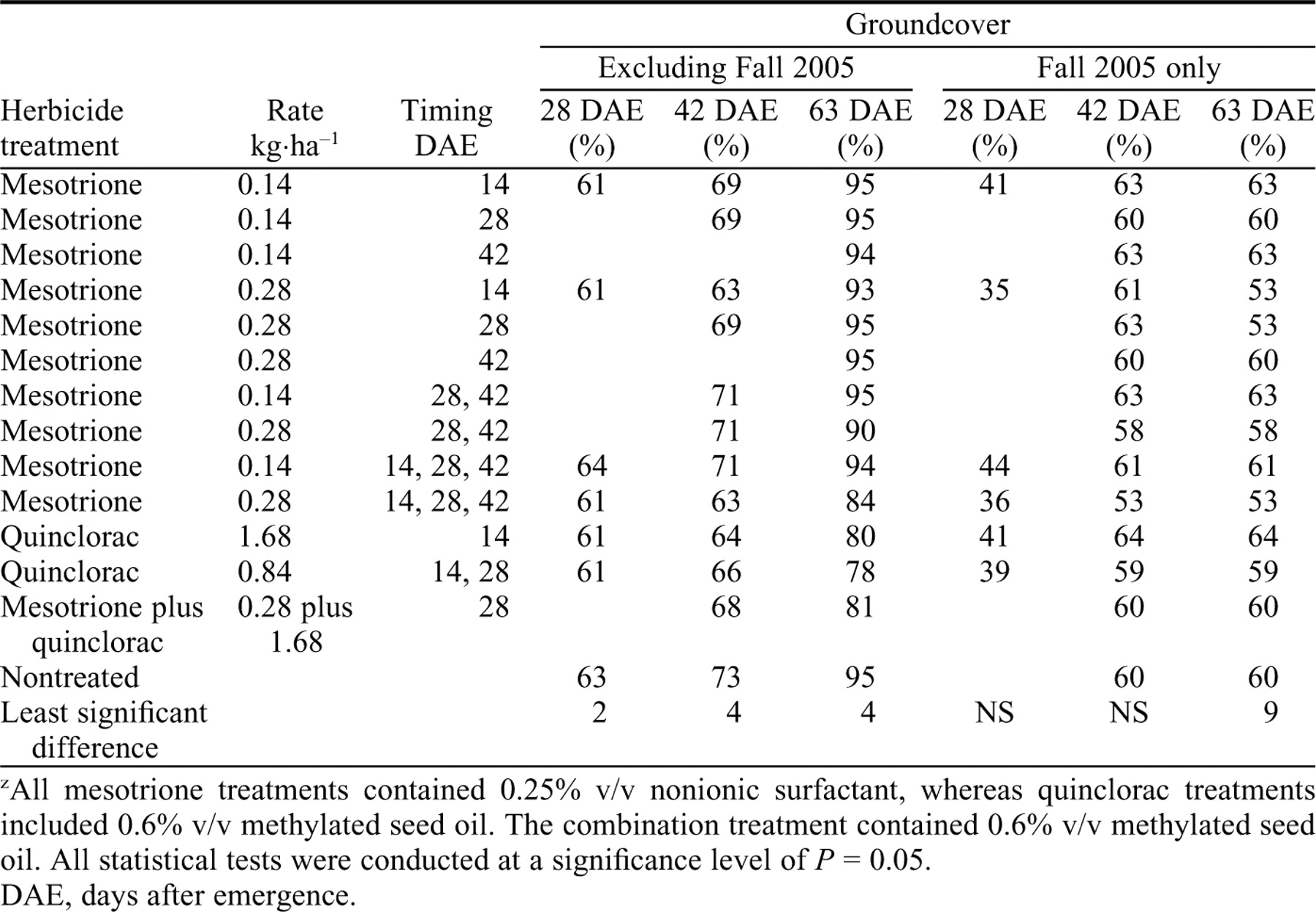 Comparisons to other research evaluating mesotrione applied at turfgrass seeding are limited. Pre- and postemergence applications of mesotrione were reported to not decrease the eventual grow-in of ‘Crossfire II’ tall fescue, whereas turfgrass coverage was reduced 15% to 35% with siduron (6.7 kg·ha−1) applied preemergence or quinclorac (0.84 kg·ha−1) applied pre- and postemergence (Askew et al., 2003).

Fall 2005 data were analyzed separately as a result of a location-by-treatment effect. When data were analyzed after removing Fall 2005 data, the location by treatment was nonsignificant; therefore, all other data were pooled over location. Excluding Fall 2005 data, no difference was observed between mesotrione at 0.14 and 0.28 kg·ha−1 when pooled over application date (Table 4). Mesotrione at 0.28 kg·ha−1 applied at 7, 14, or 28 DAE injured tall fescue 9% to 18% 7 and 14 DAA; however, injury decreased to less than 5% by 28 DAA. Tall fescue injury for all other treatments was less than these three treatments at 7 and 14 DAA. Although the highest injury was observed at 0.28 kg·ha−1 applied at 7 or 28 DAE, such injury translated into delayed tall fescue groundcover for only the 7 DAE application.

The effect of mesotrione timing and rate on turf-type tall fescue injury and turfgrass groundcover.

Greater overall injury and groundcover reduction was observed in Fall 2005 than other trial dates (Table 4). In addition, although the Fall 2005 multiple application study and timing study were initiated at the same time, greater injury was observed in the timing study. It was noted that although both studies in Fall 2005 were conducted on the same soil type, the timing study experienced more saturated soil conditions. In Fall 2005, mesotrione at 0.28 kg·ha−1 injured tall fescue greater than 0.14 kg·ha−1. In general, tall fescue injury decreased and turfgrass cover at 49 DAE increased as the stand age increased from at seeding to 28 DAE. Observations from Fall 2005, although an aberration, reveal the potential detrimental effect of mesotrione when applied during nonoptimal establishment conditions.