Water availability is becoming limited across many areas of the United States. In recent years, deficit irrigation, or application of water at levels less than maximum evapotranspiration (ET) demand, has been practiced as a strategy to minimize water, resulting in overall water savings. An irrigation deficit can be achieved by returning less water than would occur through actual ET. In some cases, this involves extending the time between irrigations and, in other cases, applying water amounts less than actual ET on a more frequent schedule. Deficit irrigation has been successfully used on some turfgrasses for water conservation without significant loss of turf quality (Brown et al., 2004; DaCosta and Huang, 2005; Feldhake et al., 1984; Fry and Butler, 1989).

Growth and physiological changes of turfgrasses in response to deficit irrigation are not well understood. Growth rate and tiller density may be impacted as may carbon metabolism. Reductions in growth during water deficits are related to a negative whole-plant carbon balance that results from photosynthetic capacity declines during drought. Maintaining a balance between photosynthesis and respiration is particularly important for plants to survive a long-term water deficit, because each may be differentially affected (Pande and Singh, 1981).

Water use efficiency (WUE), expressed as the amount of water lost through ET relative to the amount of carbon fixed, may also be affected by deficit irrigation. Generally, higher water use rates in turfgrasses are associated with increased soil water availability (Beard, 1973). Turfgrass subjected to deficit irrigation or limiting soil moisture may use less water when compared with well-watered turfgrass (Qian and Engelke, 1999). Overall, the extent of allowable deficit irrigation may vary among species and cultivars with warm-season grasses typically being better able to withstand greater levels of deficit irrigation when compared with cool-season grasses (Carrow, 1995; Qian and Engelke, 1999).

In an earlier publication that presented turf quality responses to deficit irrigation in the same study area described here, we reported that tall fescue quality in Kansas was acceptable between June and September when irrigated at 60% and 80% of actual ET in 2001 and 2002 (Fu et al., 2004). However, if the turfgrass manager could tolerate 1 week of unacceptable quality, then a MDIL of 40% and 60% in 2001 and 2002, respectively, would have sufficed. Zoysiagrass quality was acceptable only when irrigated at 80% ET. Using the lower MDIL assumptions for tall fescue and 80% ET irrigation for zoysiagrass, tall fescue required 28% less water than zoysiagrass in 2001 and the same amount of water as zoysiagrass in 2002.

Our objective was to determine growth and physiological impacts of the previously reported MDIL on tall fescue and zoysiagrass, and also evaluate responses across all deficit irrigation levels.

The study was set up as a randomized split-plot design with turfgrass species as the main plots and irrigation levels as the subplots. The main plots measured 5.9 × 1.8 m and consisted of ‘Meyer’ zoysiagrass and ‘Falcon II’ tall fescue. All main plots were established by sodding on a river-deposited silt loam soil (fine, montomorillonitic, mesic Aquic Arquidolls with a pH 6.4 and phosphorus and potassium of 41 and 367 mg·kg−1, respectively) in Spring 2000 into plot areas that were replicated three times. The subplots measured 1.2 × 1.8 m and consisted of irrigation levels of 20%, 40%, 60%, 80%, and 100% of ET. Each plot was bordered by metal edging (set 15 cm deep) to minimize lateral movement of water on application.

Plots were irrigated twice weekly using a metered, handheld hose with a shower nozzle and the appropriate amount of water was monitored using a flow meter. Deficit irrigation amounts were determined by taking the fraction of water use (ET100) of lysimeter-grown turf receiving 100% actual ET. Evapotranspiration was measured using lysimeters and the water balance method (Qian et al., 1996b). Lysimeters, one in each plot, were constructed of polyvinylchloride pipe (10.1-cm diameter by 25-cm deep) that had a nylon screen on the bottom end attached with duct tape. An intact soil core with accompanying turf was collected from plots using a 10-cm diameter cup cutter and each was placed in a lysimeter. Lysimeters were then set into holes located in the center of each plot. The day before the study began each year, lysimeters were irrigated until water drained through the bottom of each. Twenty-four hours later, each was sealed on the bottom end with two-layer plastic, weighed to determine its reference weight, and then returned to respective holes in the plot area. To determine ET, lysimeters were removed from the field and weighed between 0100 hr and 0200 hr on Monday and Friday of each week. The mass of water lost from each was recorded and converted to ET. Water was then added to lysimeters using a graduated cylinder to return each to its reference weight before returning to the field.

Deficit irrigation amount for field plots was calculated as: deficit irrigation level × ET100 × an area adjustment factor. Total water applied to turf receiving 100% ET during the study periods in 2001 and 2002, respectively, was as follows: tall fescue, 562 and 598 mm and zoysiagrass, 390 and 449 mm.

Turf quality was visually assessed weekly on a 0 to 9 scale in which 0 = brown or dead turf; ≥6.0 = acceptable quality; and 9 = optimum greenness and cover.

Canopy vertical growth rate and tiller density were determined every 4 weeks. Canopy vertical growth rate was the difference in turf canopy height before and after cutting on 3-d intervals. A sheet of paper was rested on the canopy surface to measure canopy height as the distance from the paper to the soil surface at eight locations in each subplot. Tiller density was determined by counting numbers of tillers in a 5.1-cm diameter template at two locations in each subplot.

Canopy net photosynthesis (Pn) and whole-plant respiration (Rw) were measured every 4 weeks beginning on 4 June 2001 and 3 June 2002 using a LI-6400 portable gas exchange system (LI-COR Inc., Lincoln, Neb.). Measurements were made between 0900 and 1500 h. Canopy net photosynthesis was measured by enclosing the turf canopy in a transparent Plexiglas chamber (15 × 10 × 10 cm) attached to the CO2 analyzer on a sunny day. The chamber was pressed into the ground ≈3 cm to provide an adequate seal for canopy gas exchange measurement. Whole plant respiration was determined in the dark by covering the Plexiglas chamber. Data for Pn and Rw were expressed as CO2 uptake and evolution per unit turf area.

Treatment effects were determined by analysis of variance according to the mixed model of Statistical Analysis System (SAS Institute, Cary, N.C.). To remove the effect of year and sampling date, data were analyzed separately for each year and variation was partitioned into grass species, deficit irrigation level, and corresponding interactions. Results indicated a significant species × deficit irrigation level interaction; therefore, results and discussion focus on responses to deficit irrigation within each turfgrass species. Where multiple measurements were made on an individual plot (e.g., for canopy vertical growth rate and tiller density), measurements were averaged before analysis. Treatment means were separated by a Fisher protected least significant difference test (P ≤ 0.05). To clarify presentation and discussion, only comparisons between the MDIL and 100% ET are presented in tables; where additional discussion across all deficit irrigation levels is included, those values are presented in the text.

Growth and physiological responses of tall fescue at the minimum level of deficit irrigation needed to maintain quality (MDIL) and at 100% evapotranspiration (ET) in 2001 and 2002 at Manhattan, Kans. 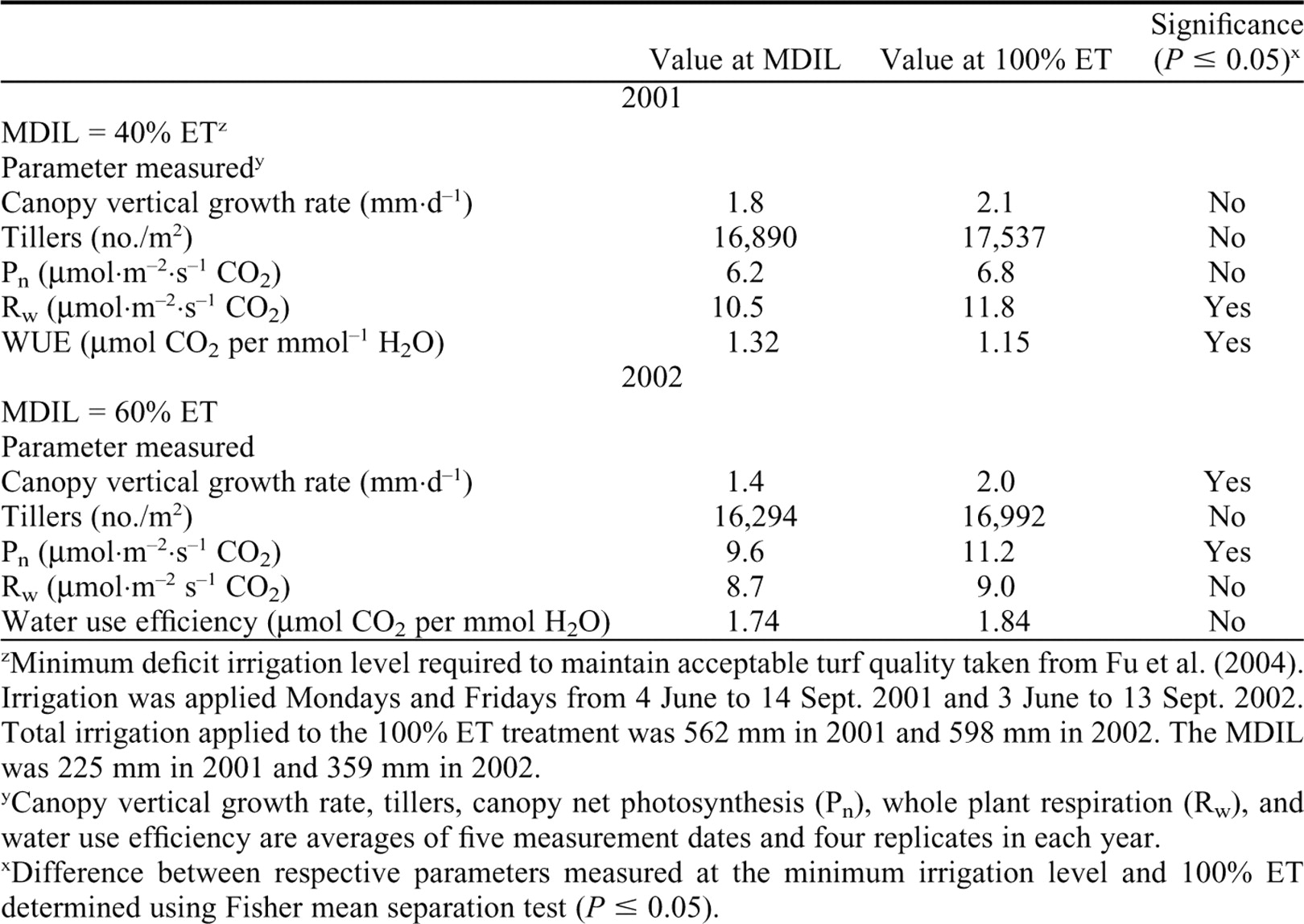 Growth and physiological responses of Meyer zoysiagrass at the minimum level of deficit irrigation needed to maintain quality (MDIL) and at 100% evapotranspiration (ET) in 2001 and 2002 at Manhattan, Kans. 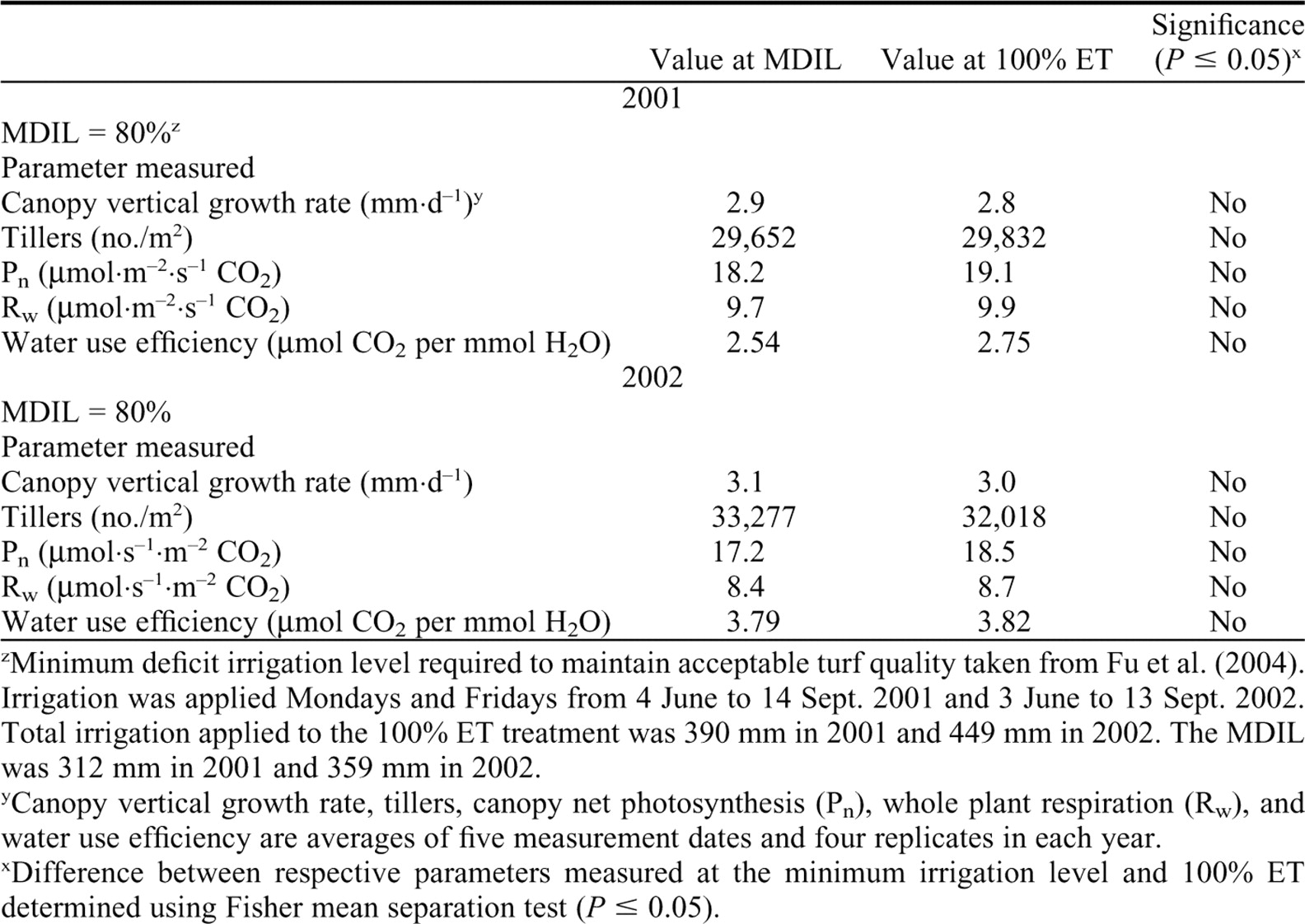 The reduction in canopy vertical growth rate with increasing irrigation deficits may reflect in the influence of a water deficit on cell expansion. Biran et al. (1981) reported that delaying irrigation until the onset of temporary wilting caused a significant decrease in clipping production in most of the 11 warm and cool-season turfgrasses evaluated. In a greenhouse study with tall fescue conducted by Huang and Fu (2001), withholding irrigation from the upper 20 cm of a 40-cm soil profile reduced canopy vertical growth rate by 79% after 16 d of treatment. A similar reduction in shoot extension rate was observed when Kentucky bluegrass was subjected to drying in the surface 20 cm of soil (DaCosta et al., 2004). Tiller density was not reduced at the MDIL in tall fescue or zoysiagrass in either year (Tables 1 and 2). Lowest tiller numbers were counted in tall fescue and zoysiagrass subjected to deficit irrigation levels of 20% and 40%, with reductions in tall fescue of up to 16% and in zoysiagrass up to 25% (data not shown).

The decline in Pn at the MDIL in tall fescue and likely occurred because g S is usually reduced in the early stages of a water deficit, which would consequently reduce Pn. DaCosta and Huang (2005) reported that Pn of colonial bentgrass (Agrostis tenuis Sibth.) and velvet bentgrass (Agrostis canina L.) irrigated at 60% and 40% ET was lower than turf irrigated at 100% ET. Huang and Fu (2000) also observed a decline in tall fescue Pn beginning 9 d after stopping irrigation in a 40-cm deep root zone in the greenhouse. Decline in Pn in turfgrass during deficit irrigation may be the result of a loss of leaf area attributable to lower canopy vertical growth rates and, in some cases, a reduction in turf density.

Here, relative to turf receiving 100% ET, tall fescue exhibited reduced canopy vertical growth rate, Pn, and Rw in 1 of 2 years at the MDIL. Tiller number was unaffected in tall fescue at the MDIL, whereas WUE increased by 15% in 1 of 2 years. Zoysiagrass growth and carbon metabolism were unaffected at the MDIL in either year. Across all deficit irrigation levels, Pn was more sensitive to deficit irrigation in both grasses than was Rw, which could potentially contribute to declines in canopy vertical growth rate, tiller number, and turf quality.