Potted orchids have become one of the most important potted floral crop in the United States with a wholesale value of $144 million in 2005 (USDA, 2006) and worldwide (Wang, 2004), particularly the hybrid Phalaenopsis. Young plants of Phalaenopsis and Doritaenopsis (intergeneric hybrids between Phalaenopsis species and Doritis pulcherrima Lindley and between their hybrids or species) require a relatively warm environment to grow quickly (Krizek and Lawson, 1974; Lee, 1991; Lee and Lin, 1984; Lin and Lee, 1988; Wang, 2005). However, once plants have reached maturity, a relatively cool environment (15 to 25 °C) is needed to promote the emergence of flowering stems (spiking) (Lee and Lin, 1984; Sakanishi et al., 1980). Phalaenopsis and Doritaenopsis perform crassulacean acid metabolism to fix CO2 primarily during the dark period of the day (Guo, 1999; Ota et al., 1991). Ota et al. (1991) reported that at a common 20 °C nighttime temperature, increasing daytime temperatures from 10 °C to 30 °C caused progressively decreased CO2 uptake during the light period, whereas CO2 uptake during the dark period increased on a short-term basis. However, none of these studies determined the long-term effects of temperature on plant growth. Extended exposure to nights warmer than the days may alter CO2 uptake and that may result in modified growth and flowering. The objective of this study was to determine how prolonged periods of nights warmer than days and average daily temperature would affect vegetative and reproductive response of a Doritaenopsis hybrid.

On 3 Mar., plants of the ‘Lava Glow’ clone of Doritaenopsis (Phal. Buddha's Treasure × Doritis pulcherrima), ≈15 cm in leaf spread (Twyford Laboratories, Apopka, Fla.) were planted in 11.4-cm standard pots (650-mL vol). The root substrate consisted of 70% small grade Douglas fir bark [Pseudotsuga menziesii (Mirb.) Franco] and 10% each of Canadian sphagnum peat, large grade perlite, and dust sphagnum moss. The substrate was amended with 6 g·L−1 powdered dolomitic limestone and 1 g·L−1 of Micromax (a micronutrient source; Scotts, Inc., Marysville, Ohio). Plants were selected for their uniformity in overall size and distributed evenly to four blocks by the size of the newest, growing leaf, which was marked. Plants were moved to and remained in four growth chambers (Model EGC15; Environmental Growth Chambers, Chagrin Falls, Ohio) at 170 μmol·m−2·s−1 PPF with a 12-h photoperiod. Ninety percent of the irradiance was provided by cool-white fluorescent tubes and 10% was from incandescent bulbs. There was no barrier between the light source and plants.

Plants were fertigated when needed with a 15N–2.3P–12.9K soluble fertilizer (Scotts Inc.) at 0.67 g·L−1 with 33 mg·L−1 Ca and 13 mg·L−1. After 37 weeks, leaf span (the distance between the tips of the two top leaves) was measured and the number of new leaves and their combined length were recorded. The length and width of the uppermost mature leaf were measured and their ratio was calculated. Plants were also observed for flowering. There were 15 plants per treatment.

A second experiment was initiated on 21 May using the same clone, except they were in 14-cm standard pots. Plants 18 to 22 cm in leaf span were selected as previously stated and subjected to a wider day/night temperature differential, including 30/20, 20/30, 25/15, and 15/25 °C. Other environmental factors remained the same as in Expt. 1. Data were collected similar to this experiment after 29 weeks. There were 22 plants per temperature regimen. Analysis of variance was performed on the data in both experiments, except for number of plants flowered.

At any given ADT, cooler days resulted in shorter and narrower leaves, but the length and width ratio remained similar to that when the days were warmer (Table 2). Leaves that emerged and grew at the lower ADT had reduced length to width ratios than those at the higher ADT, giving more oval-shaped leaves. Although leaves produced at 25/30 °C or 25/20 °C had similar lengths, those grown at 25/20 °C had a reduced length to width ratio.

Results from the second experiment were similar to the first one despite that the day/night differential was increased from 5 °C to 10 °C. Although 30/20 °C and 20/30 °C resulted in similar numbers of new leaves being produced, those produced at 20/30 °C were shorter (Table 3). The small leaf span and lesser combined leaf length were dramatic at 15/25 °C (Table 3). Despite the same ADT, new leaves produced at 15/25 °C were very small and only 50% the length of those at 25/15 °C (Table 4; Fig. 1), giving a length to width ratio of 1.4, and a round appearance. These leaves were deeper green than leaves in other temperature regimen (Fig. 1). All 22 plants at 15/25 °C bloomed, whereas none in the other three day/night temperature regimen had flowers.

Maturation of the slow-growing Phalaenopsis is directly related to the rate of increase in cumulative leaf area (Lee, 1991). The current data support the findings of Lin and Lee (1988) that Phalaenopsis hybrids require high temperatures to grow quickly and produce more total leaf area at 30/25 °C compared with 25/20 °C or 20/15 °C. It is very clear that, for slow-growing plant species such as orchids, results from short-term experiments may not be a reliable tool for predicting the long-term growth response to certain environmental conditions.

The cool day/warm night temperature regimens of 20/25 °C and 15/25 °C markedly restricted vegetative growth. Because increased levels of soluble sugars in leaves have been associated with spiking (Lee and Lee, 1996), the current data suggest that there might have been increased sugar levels in leaves at the 20/25 °C and 15/25 °C conditions, which contributed to spiking and flowering. The photosynthetic response and levels of soluble sugars in the leaf at cool day/warm night conditions need to be studied in more detail to fully understand what contributed to flowering at these conditions.

Day/night air temperatures of 25/20 °C and 20/15 °C are capable of triggering spiking in Phalaenopsis and its hybrids (Lee and Lin, 1984). However, 25/20 °C in Expt. 1 only triggered one third of the plants to flower and 25/15 °C in Expt. 2 failed to trigger this cloned Doritaenopsis to start spiking. Surprisingly, with the same ADT, the reversed day/night temperatures (20/25 °C and 15/25 °C) effectively induced plants to flower under a 12-h photoperiod. Doritis pulcherrima naturally spikes in the spring rather than in the fall as Phalaenopsis or the large-flowered Doritaenopsis hybrids do. The Doritaenopsis used in this study is a first-generation hybrid of Doritis pulcherrima. As such, this Doritaenopsis clone may behave differently from Phalaenopsis or the more complex Doritaenopsis hybrids. More research is needed to fully understand the control mechanism for spiking in Phalaenopsis and Doritis species and hybrids.

The changes of leaf L:W ratio in response not only to ADT, but to day/night temperatures clearly show the diurnal thermoregulation of plant morphology. The smaller leaf L:W ratio at lower temperatures is in agreement to that observed by Lin and Lee (1988).

Results from this study clearly show the marked diurnal thermoregulation of plant growth and development. Having the day temperature in the 25 °C to 15 °C range, a prolonged period of nights being 5 °C to 10 °C warmer does not appear to enhance the accumulation of photosynthetic products and is not favorable for rapid vegetative growth. However, cool days and warm nights may be used as an effective tool for inducing spiking in certain hybrids. Additional studies are needed to learn if other Phalaenopsis species and hybrids respond similarly to the reversed day/night temperatures as this first generation Doritis pulcherrima hybrid. 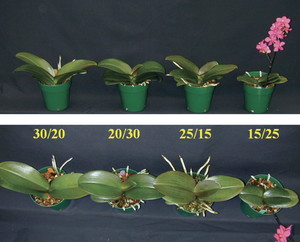