‘Saanich’ (Fig. 1) is a new floricane-fruiting red raspberry (Rubus idaeus L.) cultivar from the breeding program at the Pacific Agri-Food Research Center (PARC) of Agriculture and Agri-Food Canada (AAFC), Agassiz, B.C. ‘Saanich’ produces a very high yield of medium-sized, firm, sweet fruit suited to machine harvesting and that can be individually quick frozen (IQF) very well. ‘Saanich’ is well adapted for the processing and fresh markets. It is resistant to the common strain of the North American raspberry aphid, Amphorophora agathonica Hottes, a vector of the Raspberry mosaic virus (RMV) complex. The choice of the name follows the tradition of naming PARC berry cultivars with B.C. First Nations names. ‘Saanich’, which translates as “place of fertile soils,” is also the name of a scenic peninsula on Vancouver Island popular with tourists as well as being part of the name of several districts located in the north part of Greater Victoria on Vancouver Island.

‘Saanich’, tested as BC 89-34-41, was selected by H. A. Daubeny from a 1989 cross of two PARC selections BC 82-5-161 and BC 80-28-50 (Fig. 2). BC 82-5-161 was selected from the cross of ‘Algonquin’ and ‘Chilliwack’. ‘Algonquin’ is homozygous for gene Ag1, which confers resistance to the common strain of A. agathonica, the aphid vector of RMV, and is relatively cold hardy (Daubeny and Anderson, 1993; Daubeny et al., 1991). During testing, ‘Algonquin’ appeared better adapted to the climate of Ontario than that of south coastal B.C. and this observation is reflected in its name. ‘Chilliwack’ was selected from a cross between BC 64-10-198 and 'Skeena' (Daubeny, 1987). BC 64-10-198 was selected from the cross of ‘Sumner’ and ‘Carnival’; ‘Sumner’ has moderate resistance to raspberry root rot and may be a source of root rot tolerance in ‘Saanich’. The other parent of ‘Saanich’ is BC 80-28-50, which is a sibling of ‘Tulameen’; both were selected from the cross of ‘Nootka’ and ‘Glen Prosen’ (Daubeny and Anderson, 1991). BC 80-28-50 demonstrated excellent fruit qualities but was ultimately discarded because of its extreme susceptibility to root rot incited by Phytophthora fragariae Hickman var. rubi Wilcox & Duncan (syns. P. erythroseptica Pethyp., P. megasperma Drechs.) (unpublished data).

Performance data for ‘Saanich’ and several other Pacific Northwest cultivars, including the widely planted ‘Meeker’, were obtained from replicated plantings established in 1996, 1999, and 2000 at PARC's Substation in Abbotsford, B.C. (Tables 1 and 2). The plantings were evaluated for 3 years each. Each planting was arranged in a randomized complete block design with a cultivar represented in three replicates of three-plant plots with 0.9 m between plants and 3 m between rows. Yield, fruit weight, fruit firmness, harvest dates, and postharvest fruit rot (caused primarily by Botrytis cinerea Pers. ex. Fr.) were measured each season from 1999 to 2004. Soluble solids concentration (SSC), firmness, titratable acidity, and postharvest fruit rot tests were determined according to Barritt et al. (1980) and Daubeny and Pepin (1974). Fruit were harvested from nine to 14 times a season, depending on the duration of a cultivar's harvest period and environmental conditions. The average fruit weight for the season was calculated from the weight of a randomly selected 50 fruit subsample from each plot on each harvest and adjusted for the proportion of yield for each harvest. The fruit ripening season was characterized by the dates at which 5%, 50%, and 95% total harvest fruit weight were reached (Table 2). Fruit firmness was measured as the force required to close the opening of the fruit with a push–pull spring gauge (Hunter Spring Mechanical Force Gauge Series L; Ametek, Hatfield, Pa.) and was calculated on a randomly selected subsample of 10 fruit three to five times each harvest season. Fruit samples were frozen; a thawed subsample was used to determine pH and titratable acidity (as a percentage of citric acid). ‘Saanich’ was also evaluated in growers' field in British Columbia and Washington state and in unreplicated machine harvest trials planted in 2003 in Mt. Vernon, Wash.

Average annual yield (kg/hill) and fruit weight for ‘Saanich’ and six other Pacific Northwest raspberry cultivars in three plantings made in different years.

Fruit traits of ‘Saanich’ and six other Pacific Northwest red raspberry cultivars in 1999–2004.

‘Saanich’ SSC was significantly different from that of the tested cultivars (Table 3). ‘Saanich’ fruit firmness was significantly lower than ‘Chemainus’, which is recognized for its very firm fruit (Kempler et al., 2006) and not different from the other cultivars (Table 3). The percent postharvest fruit rot of ‘Saanich’ was lower than that of ‘Tulameen’, similar to that of ‘Cowichan’, ‘Meeker’, and ‘Qualicum’ and higher than that of ‘Chemainus’ and ‘Malahat’; ‘Tulameen’, ‘Qualicum’, ‘Chemainus’, and ‘Malahat’ are recognized for their good postharvest fruit quality (Kempler and Daubeny, 2000; Kempler and Daubeny, 2006). The pH of ‘Saanich’ fruit was the highest in the trial but not significantly different from ‘Cowichan’ and ‘Malahat’. The titratable acidity of ‘Saanich' fruit was the lowest of all the tested cultivars, but the difference was only significantly lower than that of ‘Chemainus' and ‘Tulameen'. This suggests that its fruit is suited to processing.

‘Saanich’ fruit appearance is excellent; fruit are long and conical with fine drupelets. Fruit color is medium to light red, and the fruit is glossy (Fig. 1). ‘Saanich’ fruit color is lighter than that of ‘Meeker’, which will make it acceptable for IQF but not for other types of processing in which dark pigment is required.

In an unreplicated machine harvest trial planted in 2003 in Mt. Vernon, Wash., ‘Saanich’ was rated as one of the highest in suitability for machine harvesting, giving excellent fruit quality (Kempler and Daubeny, 2006). ‘Saanich’ was machine-harvested from unreplicated plots on 14 and 20 July 2006 and small samples (2–3 kg) were run through a commercial individual quick freeze (IQF) facility. The frozen fruit was free from broken and shattered fruit and was superior to that of the industry standards ‘Meeker’ and ‘Coho’. In large-scale grower trials in B.C., Wash., and Ore., ‘Saanich’ established itself quickly, was suited for mechanical harvesting, and produced high yield 1 year after planting of fruit suited for IQF that is firm and of high quality.

‘Saanich’ flowers are self-fertile, and the percentage of drupelets set under field conditions appears to be similar to that of ‘Qualicum’, ‘Malahat’, and ‘Meeker’, each of which is recognized for its high percentage of set (Daubeny, 1971; Daubeny and Kempler, 1995; Kempler and Daubeny, 2000).

‘Saanich’ is vigorous, producing canes that have an upright habit and cane diameter that is similar to other commercial cultivars (data not shown). The average numbers of nodes per floricane is 28 compared with 23, 25, 26, 27, and 27 for ‘Cowichan’, ‘Tulameen’, ‘Qualicum’, ‘Chemainus’, and ‘Meeker’, respectively. ‘Saanich’ produced 52 g of dry matter of primocane compared with ‘Chemainus’, ‘Tulameen’, ‘Meeker’, and ‘Qualicum’, which produced 104, 97, 89, and 49 g, respectively. ‘Saanich’ produced 15 primocanes per hill compared with ‘Chemainus’, ‘Meeker’, ‘Tulameen’, and ‘Qualicum’, which produced 22, 14, 11, and 10, respectively (data not presented). ‘Saanich’ floricanes are straight and strong with short internodes and thinner canes than ‘Tulameen’, ‘Qualicum’, ‘Cowichan’, and ‘Chemainus’ but similar to those of ‘Malahat’ and ‘Meeker’. Bark color is dark grey to light brown, which is darker than ‘Meeker’, and with some basal cracking. Spines are light grey in color on the lower 40 cm of the cane but very sparse acropetally.

‘Saanich’ plants break bud earlier than all other PNW grown cultivars. Bud break is very good and even and flowering begins at the same time as it does for ‘Cowichan’ and ‘Chemainus’ and later than ‘Tulameen’, ‘Qualicum’, ‘Meeker’, and ‘Malahat’ (data not presented).

‘Saanich’ has been characterized by simple sequence repeat markers analysis for three markers; the patterns obtained were group 9, 2, and 4 for the first second and the third markers, respectively (Graham et al., 2002). The markers produce a unique cultivar identification pattern for ‘Saanich’.

‘Saanich’ was selected in greenhouse screening trials for the gene Ag1 that confers resistance to the common biotype of A. agathonica Hottes, the North American aphid vector of the RMV complex. Aphid colonization has been noted on plants in the field. We assumed that this is a resistance-breaking biotype of the aphid, which has also been found on other cultivars with the Ag1 gene (Kempler and Daubeny, 2000; Kempler et al., 2005). ‘Saanich’ has been indexed yearly (1992–2006) for RMV using the double-stranded RNA technique (Kurppa and Martin, 1986) and for raspberry bushy dwarf (RBDV) using the enzyme-linked immunosorbent assay technique. ‘Saanich’ has tested negative to RMV ever since the genotype was selected. However, RMV pressure in the Pacific Northwest is low, implying that ‘Saanich’ is not necessarily resistant to RMV (Martin, 2002). ‘Saanich’ first tested positive for RBDV in 2004, 8 years after it was planted within a large ‘Meeker’ planting along with other PNW cultivars and selections in Lynden, Wash. After 6 years, all the ‘Meeker’ plants were RBDV-positive, whereas ‘Saanich’ still tested negative for RBDV. ‘Saanich’ exhibited an unusually long delay in getting infected with RBDV suggesting that it is moderately tolerant (unpublished data). Most of the raspberry plantings in the Pacific Northwest are planted with cultivars that are susceptible to RBDV, with only ‘Willamette’ and ‘Cowichan’ as resistant commercial cultivars.

‘Saanich’ may exhibit some degree of field resistance to root rot incited by P. fragariae var. rubi. In greenhouse screening trials evaluating cultivars and selections for reaction to P. fragariae var. rubi, ‘Saanich’ reacted similarly to ‘Meeker’ and ‘Chilliwack’, which show some field resistance, but more resistance than ‘Willamette’, which is recognized as lacking field resistance (Levesque and Daubeny, 1999). The enduring success of ‘Chilliwack’ in Chile has been attributed to field resistance to root rot (unpublished data; Kempler and Daubeny, 1999). In field trials under extreme root rot pressure at the WSU Research and Extension Center at Puyallup, Wash., and the WSU-NWREC, Mt. Vernon, Wash., ‘Saanich’ was slower to show symptoms of root rot than ‘Meeker’ (unpublished data).

In the Pacific Northwest, ‘Saanich’ has been rated as less susceptible to spur blight [Didymella applanata (Niessl) Sacc.] than ‘Meeker’ and moderately susceptible to cane Botrytis (B. cinerea) and to anthracnose (Elsinoe veneta Burkh.), which are the same reactions as ‘Tulameen’.

‘Saanich’ has excellent winter tolerance in the Pacific Northwest, being similar to ‘Qualicum’, which is known for its winter hardiness (Daubeny and Kempler, 1995). Because ‘Saanich' plants break bud and leaf out early in the spring, it might be susceptible to late spring frost. However, in the PNW, no frost damage has been noted for this cultivar.

‘Saanich’ is a multipurpose cultivar that is particularly well suited for the IQF market. In addition, it is high yielding, produces high-quality, relatively small-sized fruit, and machine harvests very well.

It is suggested that ‘Saanich’ be considered as a replacement for the PNW standard ‘Meeker’. Although ‘Meeker’ is suited for processing, it has limitations for fresh market and IQF use and it becomes infected with pollen-born RBDV very rapidly resulting in poor fruit set that reduces yield and fruit quality (Daubeny et al., 1978; Martin, 1998). 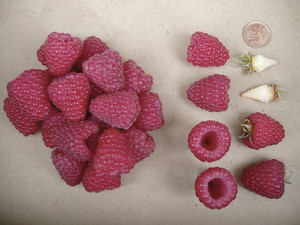