The U.S. National Arboretum has an ongoing breeding program aimed at developing new cultivars of ornamental cherry with disease and pest resistance, tolerance to environmental stresses, and superior ornamental characteristics. Breeding strategies include broadening the genetic base of ornamental Prunus by incorporating germplasm from diverse Prunus species into new cultivars, analyzing genetic diversity using molecular markers, and exploring the use of genetic engineering to increase disease and pest tolerance. This report documents the first two flowering cherry selections, Prunus ‘Dream Catcher’ and ‘First Lady’, released from the flowering cherry breeding program at the U.S. National Arboretum.

‘Dream Catcher’ is a selection from open-pollinated seedlings collected in 1978 by D.R. Egolf. The maternal parent, Prunus ‘Okame’ is an early-flowering cultivar developed by C. Ingram of Benenden, U.K., and is a hybrid between P. incisa Thunb. and P. campanulata [P. cerasoides D. Don var. campanulata (Maxim.) Koidz.] (Krussman, 1978). The ‘Okame’ tree from which ‘Dream Catcher’ is derived was growing on the grounds of the U.S. National Arboretum within 500 m of several hundred other ornamental Prunus taxa. ‘Dream Catcher’ was initially selected in 1986 by the late Donald Egolf, and between 1990 and 1992, rooted cuttings were sent for evaluation to nursery and university cooperators in Alabama, Florida, Georgia, Indiana, Iowa, Maryland, Massachusetts, Minnesota, Mississippi, Missouri, New Jersey, Ohio, Oregon, Pennsylvania, Tennessee, Texas, and Virginia. ‘Dream Catcher’ was released in 1999 by M. Pooler after evaluation in these locations.

‘First Lady’ was selected in 1988 by D. Egolf from seedlings resulting from a controlled hybridization made in 1982 between P. ‘Okame’ (male) and P. campanulata (female). Between 1990 and 1998, rooted cuttings or budwood were sent for evaluation to cooperators in California, Florida, Missouri, Oregon, and Tennessee. ‘First Lady’ was released in 2003 by M. Pooler based on performance in these locations.

The names ‘Dream Catcher’ and ‘First Lady’ were registered in 1999 and 2003, respectively, with the International Registration Authority for Unassigned Woody Genera (Mark Tebbitt, Brooklyn Botanic Gardens, Brooklyn, N.Y.) in accordance with the International Code of Nomenclature for Cultivated Plants–1995 (Brickell, 1995). Herbarium-type vouchers of these cultivars collected by the author will be deposited in the U.S. National Arboretum Herbarium.

Prunus ‘Dream Catcher’ (National Arboretum No. NA61050, Plant Introduction No. PI583787) is a deciduous, upright, vase-shaped flowering cherry that has reached a mature height of 8.0 m and a width of 4.8 m in 25 years of growth (Fig. 1). Bark is gray (Royal Horticultural Society [RHS] 62B; Royal Horticultural Society, 1986) on the surface with undertones of dark brown (RHS 166A) with conspicuous lighter brown (RHS 166B) lenticles 1 to 2 cm long (Fig. 2). Mature leaves are broadly elliptic to obovate, up to 10 cm long by 6 cm wide, acuminate at the tips, obtuse at the base, and have doubly serrulate margins. The adaxial (upper) leaf surface is dark green (RHS 139A), smooth, and somewhat glossy and the abaxial (lower) surface is yellow–green (RHS 147B). Petioles are slender, sometimes glandular, 1.5 to 2 cm long, and yellow–green (RHS 146C). Stipules are deciduous and 1 to 1.2 cm long. Flowers are single, borne in umbels of two to four on racemes, medium pink (RHS 62B), and open in late March and early April in Washington, DC, ≈1 week after Prunus ‘Okame’ begins to bloom. Petals are overlapping, elliptic, and emarginate, each ≈1.5 cm long and 0.9 cm wide. Inconspicuous fruit (drupes) are ovoid, 1.2 cm long, and turn glossy black when ripe ≈2 months after bloom.

Prunus ‘First Lady’ (NA 61,051, PI584481) was selected for its strongly upright, almost columnar growth habit that has reached a height of 8.5 m with a crown spread of 4.5 m after 20 years of growth in Washington, DC (Fig. 3). Mature leaves are broadly elliptic to obovate, up to 8 cm long by 4 cm wide, acuminate at the tips, obtuse at the base, and have doubly serrulate margins. The adaxial leaf surface is medium green (RHS 137A) and smooth, and the abaxial surface is lighter green (RHS 137C). Petioles are slender, sometimes glandular, 1.5 to 2 cm long, and yellow–green (RHS 146C). Stipules are deciduous and 1 to 1.2 cm long. Flowers are single, semipendulous, borne in umbels of two to five on racemes, dark pink to near red (RHS 64C) with reddish calyx and filaments, and open in late March in Washington, DC, at about the same time as Prunus ‘Okame’. Petals are nonoverlapping, oblong, and emarginate, each ≈1.0 cm long and 0.9 cm wide. Inconspicuous fruit (drupes) are ovoid, 1 cm long, and turn glossy black when ripe, ≈2 months after bloom.

Both ‘Dream Catcher’ and ‘First Lady’ are adaptable to the same cultural conditions as other flowering cherry cultivars, and will grow and flower best in full sun in well-drained soil with adequate moisture. Both are cold hardy to USDA hardiness zone 6 (USDA, 1990) and heat-tolerant to AHS zone 9 (AHS, 1997). Some damage to flower buds may occur in severe zone 6 conditions. As a result of the presence of germplasm from P. campanulata, which is recommended only to USDA zone 7 (Dirr, 1998), these cultivars are not recommended for USDA zone 5 or colder. ‘Dream Catcher’ is readily propagated from semihardwood cuttings using 3000 ppm IBA in talc or can be budded or grafted and displays vigorous early growth in the nursery. ‘First Lady’ can be propagated from softwood cuttings taken from juvenile material such as suckers, by budding, or by grafting. Rooting of cuttings from mature plants is challenging with ‘First Lady’. Plants of both cultivars are suitable for either field or container production and will usually produce flowers 2 years after vegetative propagation.

Both ‘Dream Catcher’ and ‘First Lady’ are well suited for use as specimen plants; in group plantings in residential, park, or public areas; or as flowering street trees. The bright pink flowers, dark green foliage, and vase-shaped habit of ‘Dream Catcher’, combined with its reported ease of nursery production, make it especially suitable for mass plantings in highway or street tree projects. Because of its upright habit, ‘First Lady’ is well suited for use in smaller areas where a mature spreading flowering cherry tree might be too large. The dark pink flower color of ‘First Lady’ and its upright habit distinguish it from most other commercially available flowering cherry cultivars.

Like all other woody ornamental plants released from the National Arboretum, ‘Dream Catcher’ and ‘First Lady’ are not patented, so they may be propagated and sold freely. Stock increase of these plants by cooperating wholesale nurseries was initiated in 1998 and 2003, respectively. Plants are available from a limited number of wholesale and retail nurseries (source list available on request). The National Arboretum does not have stock of these plants available for general distribution but can supply budwood or unrooted cuttings to nurseries wishing to propagate these plants.

Prunus ‘Dream Catcher’ in the field with closeup of flowers (inset). 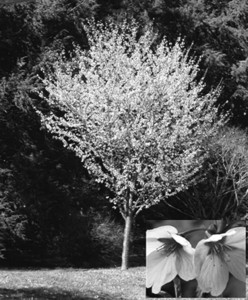 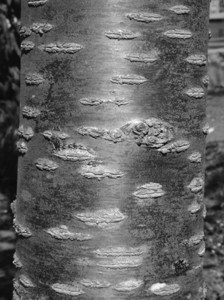 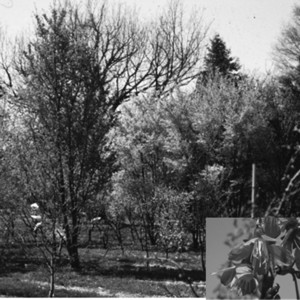