Ground management is a key orchard production practice for profitable and sustainable tree fruit production (Derr, 2001; Geldart, 1994). Effective ground management can control weeds, conserve soil moisture, prevent soil erosion, improve water infiltration and nutrient retention, enhance fruit quality, and maintain or improve soil organic matter and structure (Johnson and Samuelson, 1990; Merwin et al., 1996; Stevenson and Neilsen, 1990). Currently, herbicide application in tree rows with grass alleys between tree rows is the standard orchard ground management practice in the United States (Shribbs and Skroch, 1986). This system aims to provide a vegetation-free zone within the tree rows to minimize weed competition with trees for water and nutrients while maintaining soil structure in the alley (Parker and Hull, 1993). Although in-row herbicide application in orchards is effective in weed control, it is costly and has adversely affected soil ecosystems and the environment. For example, herbicide application in the row area of orchards has reduced soil microbial activities (Elmore et al., 1997; Glover et al., 1999) and elevated herbicide contamination of underground and surface water (Merwin et al., 1996). Therefore, there is a need to replace the traditional in-row ground management method with more sustainable and profitable practices.

As part of an ongoing research project on the use of synthetic polypropylene groundcover for sweet cherry (Núñez-Elisea et al., 2004, 2005a, 2005b), this study was conducted on a Van Horn fine sandy loam soil at the MidColumbia Agricultural Research and Extension Center, Hood River, Ore., from 2001 through 2005. The Van Horn series consists of well-drained soils on uplands. These soils formed in stratified alluvial deposits, and they are moderately permeable. The 1.2-ha orchard used in this study was planted at 5.4 m between rows and 3 m within rows in March 2001 with second-leaf Regina sweet cherry on Gisela 6 rootstock. The trees were trained to a central leader.

A randomized complete block design was used with two treatments and eight replicates in this study. One treatment was 2.44-m wide synthetic fabric made of black woven polypropylene (DeWitt Co., Sikeston, Mo.) covering the tree row centers. This water-permeable polypropylene was placed on the ground in April 2001 with 30-cm wide edges buried in the soil on both sides of a tree row. The other treatment was the control (no groundcover but with herbicide applications in the row area of same width to control weeds). Roundup (glyphosate) at 1388 mL·ha−1 mixed with 147 L·ha−1 of water was sprayed in the control treatment in early June each year from 2001 to 2005. Each plot had 36 trees (including four pollinizers) in four consecutive rows. Only the middle 12 trees in the two central rows were used for data collection, including tree growth and fruit yield measurements. Fertilizer recommendations were based on shoot growth and nutrient concentrations in leaf and soil in this study. No N, P, or K fertilizer was applied to either treatment during the first 3 years of the study. However, N fertilizer was applied to both treatments in April at 8 kg N·ha−1 in 2004 and 33 kg N·ha−1 in 2005 as ammonium sulfate. Irrigation scheduling was conducted separately for each individual plot on a weekly basis from May to September according to tree needs in relation to soil moisture. Soil moisture content was measured weekly and irrigation was conducted during the irrigation season from May to September with a portable frequency domain reflectometry probe (Diviner 2000; Sentek, Stepney, Australia) from 2001 to 2004 and using a neutron probe (model CPN 503) in 2005.

Soil and plant sampling and analysis.

Soil sampling was conducted at the depth interval of 0 to 30 cm for each plot in October 2000 before tree planting and treatment imposition and in August of 2001, 2002, 2003, 2004, and 2005, approximately one month after fruit harvest. Ten soil cores per sample were randomly collected from each plot with a 2.5-cm diameter soil probe after removing visible tree and weed residues from the soil surface. Each year, a composite sample was collected between four trees (3 m apart) in the middle of each plot. Each sample was placed in a soil-sampling bag and then stored in a cold storage room at 1 °C. All samples were air-dried, ground to pass through a 2-mm sieve, and thoroughly mixed. Soil nitrate, available P, K, Ca, Mg, S, B, Zn, Mn, and Cu contents were extracted using the Mehlich III method (Mehlich, 1984). Soil pH was determined in a 1:1 (soil:H2O) solution (Watson and Brown, 1998), and organic matter was measured using the loss-on-ignition method (Combs and Nathan, 1998).

A leaf sample was taken randomly from each plot in August of 2001, 2002, 2003, 2004, and 2005, respectively. Each year, the sample was collected from the same four trees and under similar weather conditions. Each leaf sample contained 24 newly but fully developed midterminal leaves from current year shoots at 1.5-m level in the tree canopy. A fruit sample was collected from each plot at harvest on 11 July 2005. Each sample contained 24 mature fruits that were randomly sampled from the central 12 data trees (two fruits per tree) in each plot. All these leaf and fruit samples were cleaned, oven-dried at 65 °C, and ground to pass through a 1-mm sieve. Total N was determined using a combustion method with a Carlo Erba 1500 series Nitrogen/Carbon Analyzer (Gavlak et al., 1994). Total P, K, Ca, Mg, S, B, Zn, Mn, and Cu were digested in a CEM MDS 2100 series microwave (CEM Corp., Matthews, N.C.) using nitric acid and hydrogen peroxide and the digest was analyzed on a Thermo Jarrell Ash 1100 ICP (Thermo and Fisher Scientific, Waltham, Mass.) (Gavlak et al., 1994).

Cash costs for each orchard establishment and management activity, including land preparation (ripping, disking, root removal, and fumigation), tree planting, purchasing and installation of polypropylene groundcover, tree pruning, control of weeds, diseases, and insects, irrigation, fertilization, and fruit harvesting, were recorded each year from 2000 through 2005 for the calculation of annual and cumulative cash costs. Accumulated interest on previous expenses was calculated at a 10% annual interest rate. Gross economic returns from fruit sales were calculated based on fruit yield and fruit price ($2.20/kg) for both 2004 and 2005.

Analysis of variance (ANOVA) for each variable was conducted separately each year because of the inhomogeneous errors across years using the ANOVA procedure in the SAS package (SAS Institute, 2002). Analysis of variance was performed on soil, leaf, and fruit nutrient concentrations and cash costs and returns as a randomized complete block design with two treatments replicated eight times. Regression analysis of soil NO3 −, P, and K contents and leaf N, P, and K concentrations against time since experiment establishment was conducted, respectively, using the REG procedure. Probability levels less than 0.05 were designated as significant.

Overall, plots under different treatments had similar available elemental nutrient levels in the soil during the first four years (2001 to 2004) of experimentation; after that, plots under polypropylene cover had lower soil N and K levels. This trend was within our expectation because tree growth (such as trunk cross-sectional area, and so on) and fruit yield were significantly enhanced by over 30% with polypropylene cover compared with no cover during the 5-year period (Núñez-Elisea et al., 2004, 2005a, 2005b). Enhanced tree growth and fruit yield with polypropylene cover increased the removal of nutrients from the soil, thus reducing available soil nutrient contents. Meanwhile, our results suggest that increased soil moisture content and soil temperature (data not presented) were both likely attributed to the greater tree growth and fruit yield with the covered trees than noncovered trees.

Polypropylene cover exerted a consistent effect on leaf N concentration each year except 2001, the first year of experimentation (Fig. 3). Leaf N concentrations in August after fruit harvest were 16.1%, 13.2%, 10.6%, and 19.3% greater with the covered trees than noncovered trees in 2002 to 2005, respectively. Because tree size and fruit yield was over 30% greater in the cover than no cover treatments (data not presented), this suggests that the total amount of N uptake per tree has been substantially enhanced as a result of polypropylene cover. Our results are different from those in western Canada (Neilsen et al., 2003) in that no significant differences in leaf N concentration were observed on apple trees between in-row black polypropylene cover and herbicide application in any of the 6 years from 1994 to 1999. Insignificant differences observed in the study of Neilsen et al. (2003) were likely because N was fertigated, which probably negated the fabric groundcover effect on leaf N relative to the control.

On the other hand, leaf P concentration in August after fruit harvest was 36.2%, 36.5%, 21.1%, and 18.6% lower with the covered trees than the noncovered trees in 2002, 2003, 2004, and 2005, respectively (Fig. 4). However, leaf P level was identical for the two treatments in 2001, the first year of experimentation. Unlike N and P, leaf K concentrations in August were almost identical for the two treatments in all the five seasons (not presented). Our results generally contrast with those of Neilsen et al. (2003) on leaf P concentrations but are consistent for leaf K concentrations.

Overall, our results suggest that leaf nutrient concentrations respond differentially to in-row polypropylene groundcover, and the responses vary with growing season. The total uptake of N, P, K, Ca, Mg, B, Zn, Mn, or Cu per tree per year seems to be significantly increased with polypropylene cover relative to no cover because of an over 30% increase in both tree growth and fruit yield in the polypropylene-covered treatment (Núñez-Elisea et al., 2004, 2005a, 2005b). The enhanced uptake of nutrients from soil with polypropylene cover may be attributable to the larger soil volume penetrated by root systems of groundcovered trees, increased soil moisture supply, elevated soil temperature beneath the polypropylene cover, and/or reduced competition from other plants such as weeds in the covered treatment (Núñez-Elisea et al., 2005b). Our results indicate that the availability of P, Ca, and Mg nutrients in soil generally remains unchanged with polypropylene groundcover. From a long-term perspective, more fertilizers may need to be applied on polypropylene-covered sweet cherry trees because of the enhanced tree growth and fruit production. 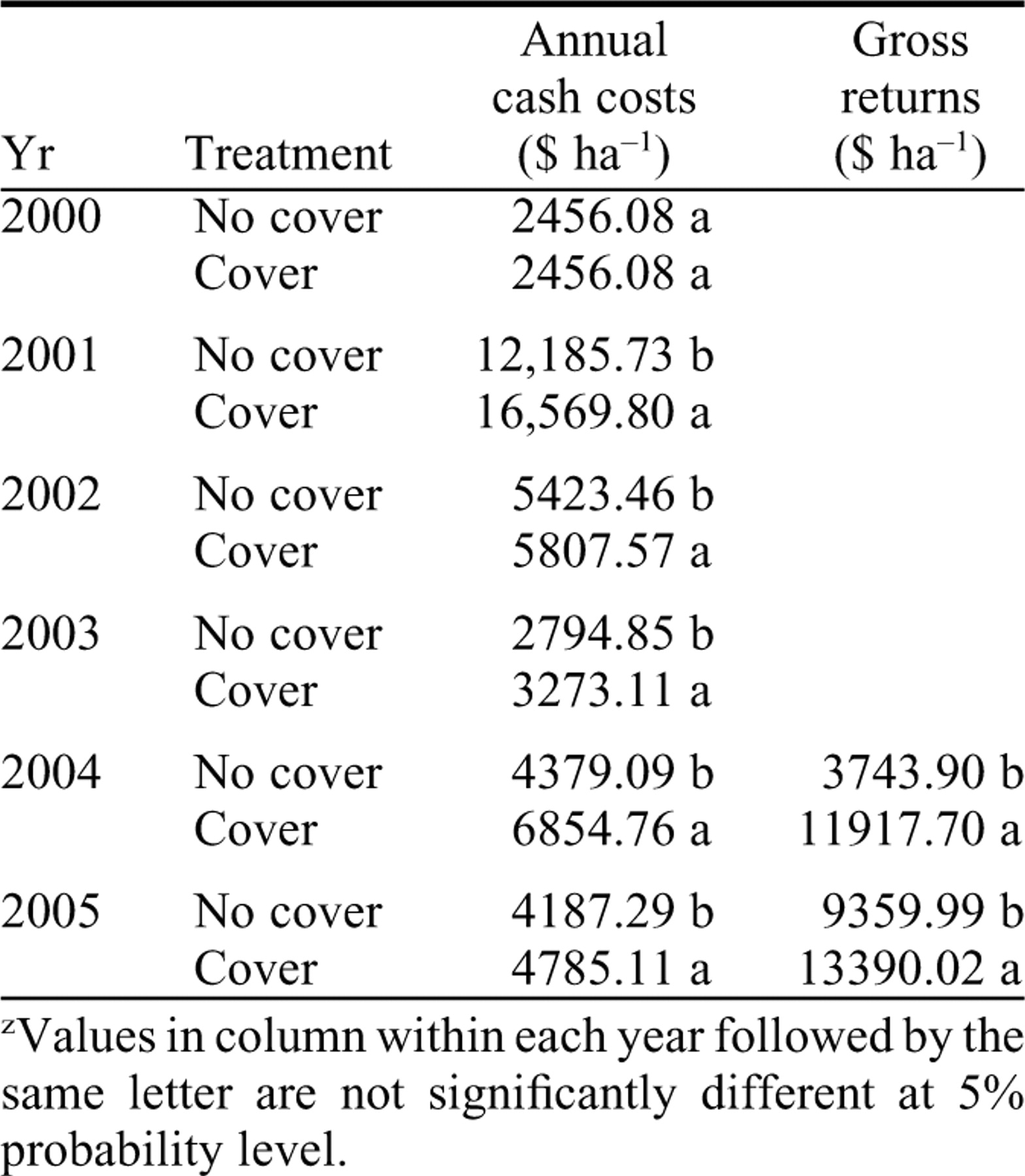 Polypropylene groundcover effects on leaf nitrogen concentration of Regina on Gisela 6. *The treatment effect is significant at P = 0.05.

Polypropylene groundcover effects on leaf phosphorus concentration of Regina on Gisela 6. *The treatment effect is significant at P = 0.05. 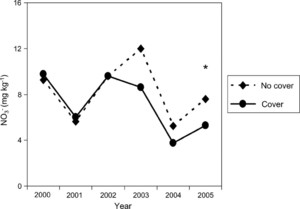 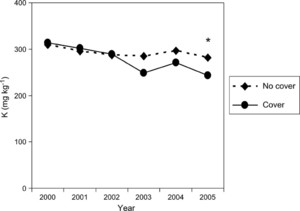 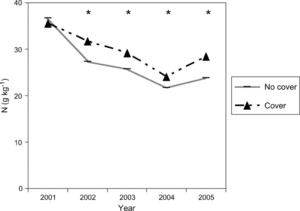 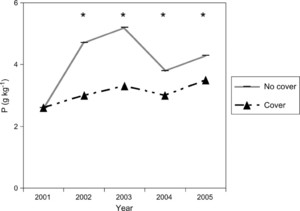 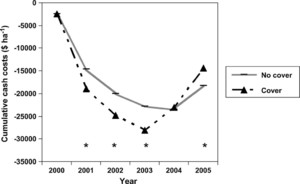