Yellow-horn (Xanthoceras sorbifolium Bunge), a plant endemic to northern China, is resistant to drought, cold, saline stress, and barren soil, but cannot withstand excess moisture (Ao et al., 2012). Yellow-horn has been cultivated for more than 6000 years in China. It is an oilseed crop, and the oil content of the seeds can be as high as 65%. The oil can be used for cooking, as well as for medicine and biofuel production (Liu et al., 2017). The seed oil has traditionally been used for cooking and lighting. In recent years, the development and use of biodiesel produced from yellow-horn have received increased attention as a result of the energy crisis. The seed kernels of yellow-horn are rich in nutrients and contain 55% crude fat, 15% soluble sugar, and mineral elements (Xie and Zhang, 2018). Yellow-horn is widely distributed and shows extensive morphological variation, especially in flower type and color. It is also widely used as a landscaping tree species (Gao et al., 2002; Xu et al., 2010). Because of its high ecological, economic, and ornamental value, the cultivation of yellow-horn has received much attention in China in recent years.

The colors of the flowers during each flowering period of ‘Yan Dong’.

‘Yan Dong’ is a new variety selected from the seedling progeny growing as a volunteer among ornamental yellow-horn plants in Dongying City, Shandong Province. In 2016, the distinctive flowers attracted the attention of the plant breeders. It was then propagated by branch grafting and bud grafting. One-year-old yellow-horn seedlings were used as rootstock. The seedlings were propagated from the seeds of the local population. The scions were the branches of the mother tree. The grafting survival rate of the first generation was about 97%. The grafting of ‘Yan Dong’ has been carried out continuously in subsequent years. The flower characteristics of all clone plants are consistent with those of the mother tree. Because the genetic traits were sufficiently specific, consistent, and stable, ‘Yan Dong’ was authorized as a novel plant cultivar in June 2021 by the State Forestry and Grassland Administration of China.

‘Yan Dong’ is a deciduous shrub or tree. The perennial branches are gray-brown; the annual branches are purple-red (Fig. 1A). ‘Yan Dong’ has odd-pinnate compound leaves and 4 to 12 pairs of lanceolate leaflets. The young leaves are yellow-green and slightly curled; the mature ones are green (Fig. 1B). It has a raceme inflorescence, and the rachis is green. The average flower diameter is ≈2.5 cm. There are five flat obovate–lanceolate petals. The petals are ≈1.6 cm long and 0.7 cm wide. There are eight stamens, five horn-shaped orange-yellow appendages, and one pistil. It differs from most cultivars of yellow-horn in the following aspects: at the early flowering stage (the first 3–4 d), the base of the petals is yellow-green (Y-G 151D) and the upper part is yellow-white to white (W 155B) (Fig. 2A). At the full-bloom stage (5–10 d after flowering), the base of the petals is orange-yellow to orange-red (Y 11A to Y-O 16A). The upper part of the petals is yellow-white (O-W 159D), with yellow to orange-yellow (Y 10B to Y-O 22A) veins extending longitudinally from the base to the upper part of the petals (Fig. 2B). The flower is yellowish white. The cultivar begins to flower in the first or second year after grafting. The capsule fruit is spherical, with a green pericarp. The diameter of the fruit is ≈5 cm, and the number of carpels is three (Fig. 1B). The seeds are black, spherical, and ≈1.5 cm in diameter. There are ≈13 seeds per fruit. ‘Yan Dong’ begins to bear fruit in the second or third year after grafting. In Dongying City, Shandong Province, the leaves sprout in late April. The cultivar is synanthous. Flowering ends in late May. It has a large number of flowers with high ornamental value. The fruit ripens in mid to late July. In addition, when it enters the full-fruit period, the seed yield is about 1500 kg/ha with ideal field management.

The differences in flower color between Xanthoceras sorbifolium ‘Yan Dong’ and ‘Jin Di 3’.

Dissemination of the Cultivar

‘Yan Dong’ is a cold-tolerant, drought-resistant, and sun-loving cultivar (Ao et al., 2012). It prefers fertile, well-drained, and neutral to slightly alkaline soil with a pH of 7.0 to 8.0. It cannot withstand excess moisture. It is distributed mainly in the warm temperate climate zone. The annual average temperature across its distribution area is 3.3 to 15.6 °C. The average temperature ranges in January and July are –19.4 to 0.2 °C and 13.6 to 32.4 °C, respectively. The frost-free period is 120 to 233 d. ‘Yan Dong’ can be planted in China as far west as Qinghai Province, as far east as Liaoning Province, as far north as Inner Mongolia, and as far south as Henan Province. This cultivar can be used for landscaping, garden greening, and urban road greening. It can also be used to make tea, cooking oil, and biodiesel.

To graft ‘Yan Dong’, 1- to 2-year-old seedlings can be used as rootstock. Koelreuteria paniculata can also be used as rootstock. Branch grafting and bud grafting are generally carried out in the spring and summer, respectively. The scions used for branch grafting should be collected during the dormant period in early spring. For bud grafting, scions should be grafted immediately after they are collected in summer. This cultivar can also be propagated by cutting. The planting density of grafted plants is generally 2 × 2 m. Fifteen days after grafting, the rootstock sprouts should be removed to promote the growth of scions. When the shoot of the scion is about 15 cm long, pillars should be erected and tied with the shoot to prevent it from wind breakage. Fertilization can be conducted two to three times a year, depending on soil fertility. Nitrogen fertilizer can be top-dressed before flowering. Phosphorus and potassium fertilizers can be applied during fruit expansion and maturity. Fertilization after fruit harvest is suggested to provide extra nutrition. The fertilizer rate should be determined based on soil fertility. In general, fertilization should be applied at a rate of 0.5 to 1 kg/tree. Nitrogen fertilizer should be added to improve growth during the growing season. At the end of the growing season, phosphorus and potassium fertilizer should be added. At the early budding stage, the plants should be watered once every 10 to 15 d. The trees should be pruned to desired shapes (e.g., arbor, subtree, or shrub) as needed. For overmature trees showing poor growth vigor, branches should be thinned, pruned, cut back, and cultivated to promote rejuvenation. Diseases and insect pests should be monitored continuously. Biological, chemical, and physical approaches should be used to prevent diseases and insects, such as aphids, whiteflies, blight, root rot, and sooty disease.

Flowers of Xanthoceras sorbifolium ‘Yan Dong’ at the early flowering stage (A) and the full-bloom stage (B). The photos were taken in Dongying City, Shandong Province, 10 May 2020.

Flowers of ‘Yan Dong’ (A) and the standard cultivar of yellow-horn (B). 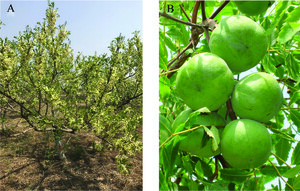 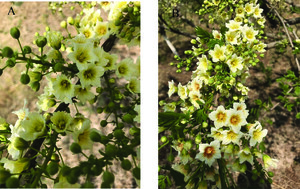 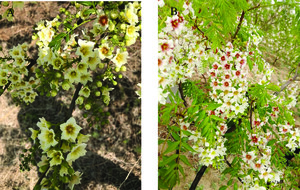