The genus Iris includes ≈300 species widely distributed in the temperate regions of the Northern Hemisphere, and many of them are attractive ornamentals that are largely used as groundcover plants for gardening and landscaping (Boltenkov et al., 2020). However, the leaves of most Iris species are high and prone to lodging easily, thus affecting their ornamental appearance. Therefore, dwarf Iris plants are desirable and popular. Because dwarf cultivars of some Iris species are relatively rare (Huang et al., 2003), there is a strong demand for dwarfing breeding of Iris. ‘Mini Fen’ as an Iris sanguinea cultivar is a dwarf plant type.

I. sanguinea is an important perennial ornamental plant (Yang et al., 2017), and it is widely used as cut flowers and in landscaping of Northeast China because of its unique, large, brightly colored flowers and strong tolerance to drought, pollution, and coldness (Dong et al., 2019; Song et al., 2014). I. sanguinea breeding mainly focuses on unique flower colors and shape, thus leading to the development and release of many new cultivars such as Beautiful Lotus (Wang et al., 2016), Forest Fairy (Kuwantai et al., 2018), Zi Meiren (Chen et al., 2019), NEFU-1 (Qi et al., 2020), and Flower Angel (Fan et al., 2021). In 2016, a new dwarf I. sanguinea cultivar was selected from the hybrids of I. sanguinea and Iris sanguinea f. albiflora and registered as Mini Fen in 2021. ‘Mini Fen’ has a unique dwarf plant type and dark pink [Royal Horticultural Society (RHS) N81A] flowers, which are different from its parents and all the ornamental cultivars of I. sanguinea.

In 2003, the seeds of I. sanguinea and I. sanguinea f. albiflora were obtained from Shenyang Botanical Garden, Shenyang, China, and planted in the Maoershan experimental forestry nursery of Northeast Forestry University (NEFU) in Harbin, China. Seeds from the crossing of I. sanguinea × I. sanguinea f. albiflora were collected in 2010 and planted in the same nursery in 2011. The seeds produced by selfing of the hybrids were collected in 2013, and they were planted in the same nursery in 2014. In 2016, a unique plant was observed among the progenies that differed in plant height and flower color from its parents. This plant was ≈36 cm in height, which was significantly shorter than that of I. sanguinea and I. sanguinea f. albiflora. It has larger dark pink (RHS N81A) flowers. During the following 3 years, this plant was propagated asexually and grown in the same nursery. Field trials were conducted in 2018 to 2021, and its annual field performance data were collected for statistical analysis. In 2021, the new cultivar was named Mini Fen, and it was officially authorized by The American Iris Society with accession number 21-0389. 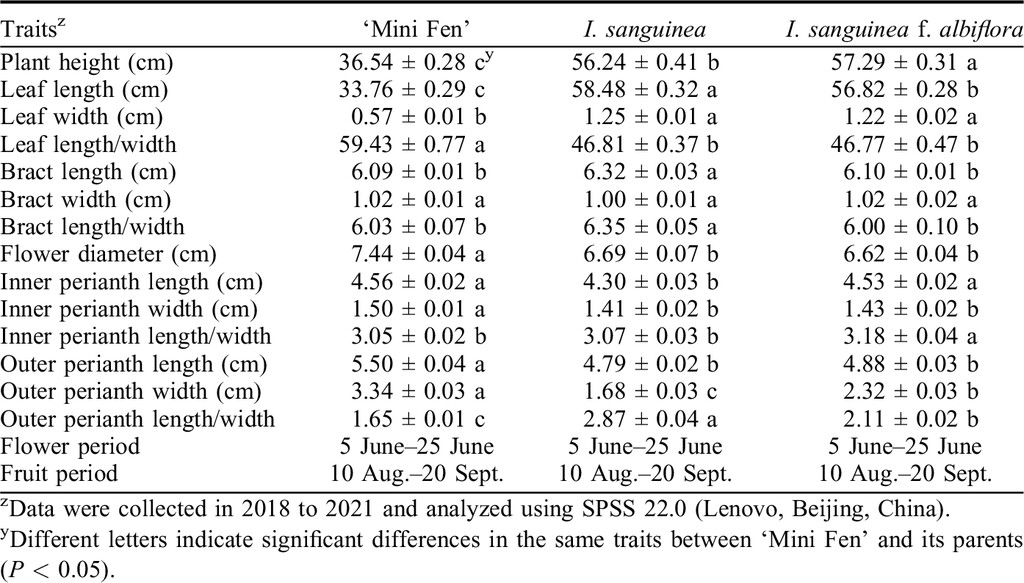 In summary, the primary differences between ‘Mini Fen’ and its parents are the plant height and flower colors. ‘Mini Fen’ has a unique short plant stature and dark pink flowers.

‘Mini Fen’ grows well with 20 cm spacing under sunny conditions and in moist, well-drained soil. It was propagated asexually in May to August. It requires regular irrigation during the growing seasons and weed control.

‘Mini Fen’ is highly adaptable to the cold regions in North and Northeast China. It can survive winter unprotected in Harbin, China. ‘Mini Fen’ can be used as cut or potted flowers and for gardening and urban landscaping.

Information about plant material and research of ‘Mini Fen’ can be obtained from Dr. Ling Wang (E-mail: wanglinghlj@126.com) at the College of Landscape Architecture, Northeast Forestry University, Harbin, China.

Representative plants and flowers of ‘Mini Fen’ (A and D), I. sanguinea (B and E), and I. sanguinea f. albiflora (C and F). 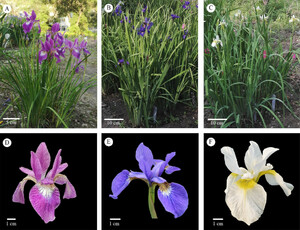