The cross for ‘Talisman’ was made in 2000 by M.K. Ehlenfeldt at the Philip E. Marucci Center for Blueberry and Cranberry Research and Extension (Rutgers University), Chatsworth, NJ. ‘Talisman’ was selected in 2005 at the same location, and was subsequently evaluated in commercial-farm test-plots in Hammonton, NJ by M.K. Ehlenfeldt and R.B. Martin Jr. from 2013 to 2019.

‘Talisman’ is a late-midseason/late-season cultivar with concentrated ripening suited for production by commercial growers. For comparison purposes, ‘Talisman’ was initially compared with ‘Duke’, a commercial early-season quality standard (Draper et al., 1987). Numerical ratings of ‘Talisman’ vs. ‘Duke’ in 2010 to 2015 showed ‘Talisman’ equal or better than ‘Duke’ in most fruit quality characters except for firmness. For this trait, ‘Duke’ was rated as firmer (7.2 for ‘Talisman’ vs. 7.7 for ‘Duke’ on a 1–9 scale) (Table 1). It is worth noting that both cultivars are mild flavored (7.1 for ‘Talisman’; 6.7 for ‘Duke’). Productivity of both cultivars was very good (>7; 1–9 scale).

Ratings of ‘Talisman’ vs. the later season ripening varieties, ‘Liberty’ and ‘Elliott’, at the P.E. Marucci Center, Chatsworth, NJ, 18 July 2018.

In detailed evaluations compared with ‘Duke’, the early-season quality standard, ‘Talisman’ demonstrated excellent yields, although slightly less than ‘Duke’ (5.8 kg/bush vs. 6.2 kg/bush) (Table 3). ‘Talisman’ exhibited a larger berry size (2.0 g ± 0.5), higher firmness (194 g/mm dfl ± 22), higher soluble solids (10.7 °Brix ± 1.4), and higher titratable acidity (0.94% citric acid eq. ± 0.43) than ‘Duke’, but the values for all of these traits were generally comparable. Although ‘Talisman’ had higher firmness values than ‘Duke’ in the commercial farm evaluations, ‘Duke’ retains its firmness and softens less after harvest than ‘Talisman’ and thus is superior in long-term storage quality. Both ‘Talisman’ and ‘Duke’ are considered mild flavored, and they are considerably less acidic than midseason cultivars such as Bluecrop or mid-late cultivars such as Liberty. Due to its mild flavor, ‘Talisman’ should benefit, when feasible, from water limitation before harvest to concentrate both acids and sugars. Similarly, wine-grape growers have recognized that limiting potassium fertilization can improve acidity levels in grapes (Mpelasoka et al., 2003); similar potassium manipulation might benefit cultivars such as Duke and Talisman.

‘Talisman’ is suitable for production in areas where highbush blueberries are typically grown. Its flowering time is very late (similar to ‘Elliott’), and thus is likely to avoid spring frost problems. Cold hardiness testing using a detached-shoot freeze-thaw assay (Rowland et al., 2005) has shown it to have cold hardiness comparable to typical northern highbush (LT50 = −27.0 °C vs. LT50 = −25.6 °C for ‘Duke’, 2012–14, data not shown).

Flowers of ‘Talisman’ are elongate and roughly urceolate-cylindrical, with delicate pink highlights near the corolla base (Fig. 2). Pollination tests have shown it to be highly self-fruitful (1.9 g/berry selfed, 2.1 g/berry outcrossed), suggesting it will be suitable for planting in solid blocks in the field. Fruit develops uniformly, and the plant produces compact, well-exposed clusters of uniform-sized fruit that ripen in a concentrated period in late-midseason (‘Liberty’/‘Jersey’ season) (Fig. 3). Subjective evaluations show ‘Talisman’ has an easy fruit removal force, potentially suited to mechanical harvesting.

Plants of ‘Talisman’ are vigorous and robust, with a rounded growth habit and a narrow base (Fig. 4). Plants tend to have stocky growth and may need assertive management at a young age to induce sufficient branching to form a balanced bush, and to avoid producing a monopodial plant. ‘Talisman’ has demonstrated good field resistance to both phases of the fungal disease mummy berry, Monilinia vaccinii-corymbosi (Scherm and Hildebrand, 2017) (blight rated as equal to 1 on a 1–5 scale, comparable to ‘Bluecrop’ and ‘Legacy’; mummy berry fruit infection is equal to low).

‘Talisman’ is released as a public domain cultivar by the USDA–ARS, and as such it may be freely propagated and grown without licensing restrictions. It is unconditionally released with no warranty given regarding its performance or adaptation under specific environmental or cultural conditions. The U.S. Department of Agriculture, Agricultural Research Service does not have plants for distribution, but can provide information on sources of propagules for interested nurseries, breeders, or researchers. Requests for information should be addressed to Dr. Mark Ehlenfeldt, Philip E. Marucci Center for Blueberry and Cranberry Research and Extension, 125A Lake Oswego Road, Chatsworth, NJ 08019 or Mark.Ehlenfeldt@usda.gov. Genetic material of ‘Talisman’ will be deposited in the National Plant Germplasm System, where it will be available for research purposes, including development and commercialization of new cultivars. It is requested that appropriate recognition be made if this germplasm contributes to the development of a new breeding line or cultivar.

A five-year-old bush of ‘Talisman’ northern highbush blueberry in fruit. 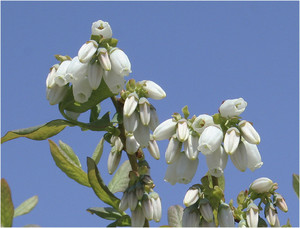 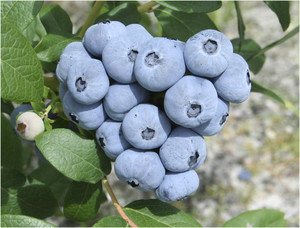 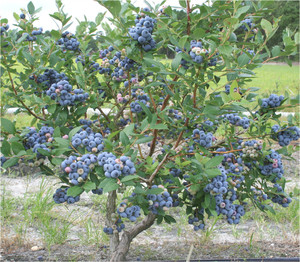