Peach (Prunus persica L. Batsch) is the primary stone fruit grown in Spain. The area devoted to this crop has increased over the past 20 years. Spain ranks third in world production after China and Italy, producing 30% of the total peach crop in the European Union. The diversity in climate of the peach production regions in Spain allows an unusually long peach season, from late April to early November. The chill hours in the peach production areas range from 200 to 400 in the south (Andalucía) to more than 1000 in inland northeast regions (Aragón and Cataluña). Current production is distributed among melting peach cultivars, nectarines, and nonmelting cultivars. Traditional and autochthonous cultivars in Spain are mostly nonmelting peaches. The aroma and quality of the nonmelting cultivars from the Mediterranean basin are very interesting. These nonmelting cultivars are grown in Spain and Italy either for fresh market or for the canning industry. However, these cultivars ripen during the mid or late season; no early cultivars with these characteristics are available in the native peach populations. The program of the Instituto Valenciano de Investigaciones Agrarias (IVIA) and Agromillora Iberia initiated several crosses between nonmelting cultivars that combined the quality of native varieties from the Mediterranean region and earliness of foreign cultivars. One selection from these crosses is the cultivar Presivac-1. ‘Presivac-1’ is an early-ripening peach cultivar with low-to-medium chilling requirements, good agronomic characteristics, very good productivity, and good fruit quality at its time of ripening. The cultivar has the characteristics of a nonmelting peach similar to ‘Jonia’ or ‘Egea’, but it ripens 1 month earlier. ‘Presivac-1’ is also well-adapted to the warm winters and dry summers of the Mediterranean area.

‘Presivac-1’ resulted from a cross made during 2000 at Agromillora Iberia S.A. in Cataluña, Spain, using the Italian cultivar ‘Egea’ from the Istituto Sperimentale per la Frutticoltura di Roma (Della Strada et al., 1996) as the female parent and the Brazilian cultivar ‘Precocinho’ from EMBRAPA, Pelotas, Brazil (Raseira et al., 2014) as the male parent. The selection and characterization were made at the IVIA, Valencia, Spain, following the International Union for the Protection of New Varieties of Plants (UPOV) Guidelines for peach (UPOV, 2003).

The objective was to obtain cultivars with low-to-medium chilling requirements that are adapted to warm winters and a dry environment (Topp et al., 2008) and have early ripening, good fruit quality, and nonmelting, aromatic, and yellow flesh. ‘Egea’ was selected as a parent due to its fruit quality, size, and organoleptic characteristics (Carbó and Iglesias, 2002). ‘Precocinho’ with 150 chill units (C.U.) contributed to the low chilling requirement (Topp et al., 2008) and early ripening (Romeu et al., 2015).

‘Presivac-1’ has low-to-medium chilling requirements (350–450 C.U.). Trees are vigorous and have a spreading habit. The full bloom of ‘Presivac-1’ occurred during the third week of February, ≈20 d before ‘Egea’ (Table 1). The flower intensity is high according to the range defined by Reig et al. (2013); therefore, ‘Presivac-1’ needs thinning at full bloom. The trees also need fruit thinning to optimize the fruit size. 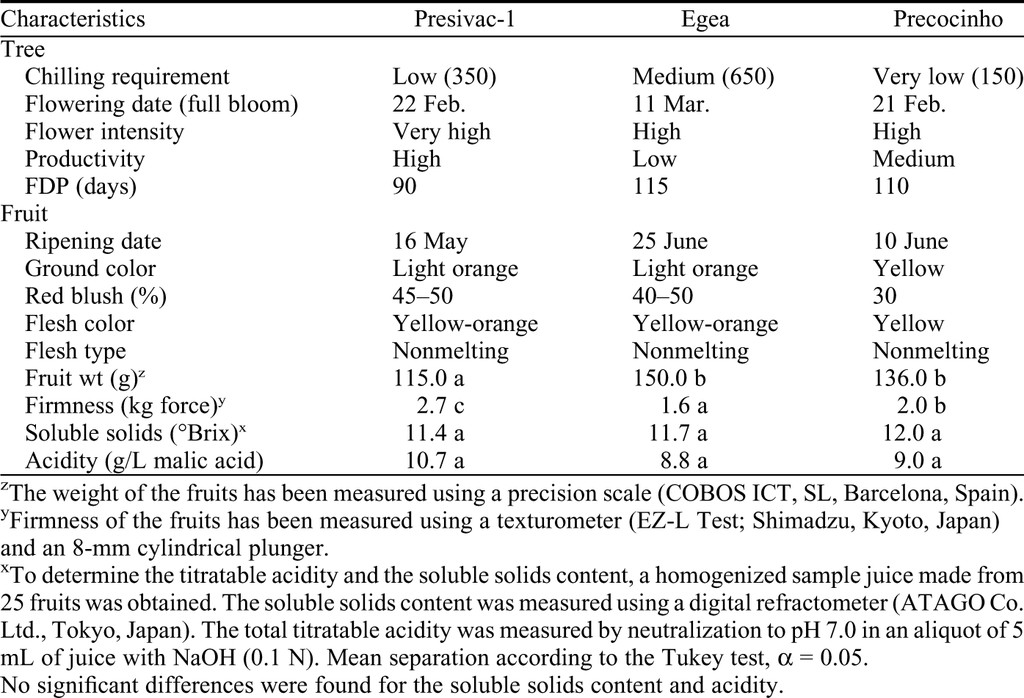 ‘Presivac-1’ trees were originally selected as seedling trees on their own roots and then grafted onto hybrid peach rootstocks after selection. Several trials with four replicates each were located in different climate zones of the Valencia region, Murcia region, and Balearic Islands. The trees received standard peach orchard management. The information presented summarizes the averages of 4 years under the climate conditions of the IVIA (Valencia, Spain) (lat. 39° 34′ N, long. 0° 24′ W, alt. 55 m).

‘Presivac-1’ is an early-ripening cultivar compared with the traditional nonmelting cultivars with yellow flesh and skin. Its fruit development period (FDP) is ≈90 d. Under our experimental conditions, the ripening date for ‘Presivac-1’ was May 16, more than 1 month before ‘Egea’ and 1 month before ‘Precocinho’ There is a lack of nonmelting flesh cultivars that are available early in the season. ‘Presivac-1’ covers this niche. Some of the nonmelting early cultivars introduced in Europe after accomplish the chilling requirement require high temperatures for ripening, which result in later ripening dates compared with the dates in the countries of origin (i.e., ‘Precocinho’) (Table 1). Fruits are localized in mix branches and old wood.

Fruit of ‘Presivac-1’ were examined at physiological maturity using samples of 25 fruits. Fruits of ‘Presivac-1’ are rounded and symmetric, have slight pubescence, a small depression at the pistil end, light orange ground color, and yellow–orange flesh. They are nonmelting, and the fruit surface is covered with a red overcolor on 50% of the fruit (Fig. 1). ‘Presivac-1’ fruits have an average size of 60 mm, weight of 115 g, and force firmness of 2.7 kg (Table 1). Measurements were performed as described by Martínez-Calvo et al. (2013). 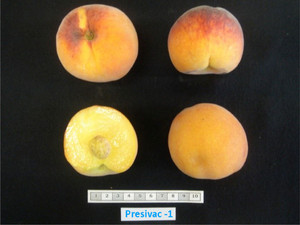