The rabbiteye blueberry (Vaccinium virgatum Aiton 2n = 6x = 72) is commercially important in the southeastern United States because of its adaptability to prevalent biotic and abiotic stresses. There is a growing interest in edible landscaping as alternative to conventional landscapes. ‘Muffin Man’ is a new public-domain, edible ornamental rabbiteye blueberry cultivar developed by the U.S. Department of Agriculture (UDSA), Agricultural Research Service (ARS) Thad Cochran Southern Horticultural Laboratory for homeowners and nursery industry. ‘Muffin Man’ is characterized by notable fall coloring in leaves and numerous unique pale pink blooms that arise on long reproductive shoots, where berries develop with attractive color ranging from pink to deep blue upon ripening. ‘Muffin Man’ produces berries with small dry stem scars and acceptable aroma and sugar–acid balance. Berry weight, berry size, firmness, pH, soluble solids content, and titratable acidity of ‘Muffin Man’ are similar to commercial cultivars Brightwell and Alapaha. ‘Muffin Man’ is an ideal choice for edible and ornamental landscape for the USDA hardiness zones 8a thru 9a.

‘Muffin Man’ is a hexaploid edible ornamental rabbiteye blueberry (V. virgatum Aiton 2n = 6x = 72) obtained in 2003 from a cross between T366 and ‘Brightwell’ (Fig. 1). The female parent, T366, is a rabbiteye blueberry hybrid selected by the University of Georgia Coastal Plain Experimental Station at Tifton, GA. ‘Brightwell’ is a rabbiteye blueberry cultivar jointly released by the USDA-ARS and the University of Georgia (Austin and Draper, 1983). Because of their ornamental appearance and uneven berries ripening, ‘Muffin Man’ was selected from a seedling-plot at the USDA-ARS research farm in Stone County, MS, in 2011. The seedling was clonally propagated and tested as MS 1190 in replicated trials consisting of three replications each at McNeil, MS, and Stone County, MS, from 2014 to 2018. Plants were grown in an acidic soil (pH 5.2) amended with pine bark using recommended production practices including drip irrigation and fertigation.

Edible ornamental blueberry cultivars having colorful berry, heat and drought tolerance, and extended berry ripening periods are valuable for homeowners and landscape industry. So far, only three ornamental rabbiteye-type cultivars (V. virgatum) and other ornamental type interspecific hybrids have been specifically released for home gardeners in the United States (Ehlenfeldt et al., 2015; Ehlenfeldt and Finn, 2007; Finn et al., 2015; NeSmith, 2018; NeSmith and Ehlenfeldt, 2010, 2011). Observations and data were collected from ‘Muffin Man’, ‘Brightwell’, and ‘Alapaha’ (NeSmith et al., 2002). The number of days required to reach 50% full bloom and 50% ripening were calculated from 1 Jan. from 2014 to 2018. Berry weight, berry size, firmness, pH, soluble solids content, and titratable acidity were determined from 2 years at the two locations. The average berry weight and size were estimated for clones of three replications by weighing and measuring the diameter of 30 berries respectively. Berry firmness was estimated using a Firmtech II (Bioworks Corp., Stillwater, OK) by measuring the force (g/mm) required to compress the skin by various amounts as the force applied was increased. Titratable acidity and soluble solids content were quantified as described by Gilbert et al. (2015). Analysis of variance was calculated using proc GLM in SAS 9.4 (SAS Institute, Cary, NC).

‘Muffin Man’ is an attractive, edible ornamental rabbiteye blueberry with notable fall coloring in leaves, numerous unique pale pink blooms that arise on long reproductive shoots, and an attractive berry color. The color of the blooms was determined according to the Royal Horticultural Society Color Chart, with values ranging from 63 A (red purple) to N155 A (white) (Fig. 2). The plant of ‘Muffin Man’ is vigorous, generates numerous canes, and has a dense canopy, making it suitable for use as a hedge. During the years of evaluation, no notable disease or pest problems were detected for ‘Muffin Man’. In the two trials, ‘Muffin Man’ bloomed from early to mid-March and fruits ripened from early June to mid-July. Observations indicated that ‘Muffin Man’ usually blooms and ripens before ‘Brightwell’ and near the time of ‘Alapaha’ (Table 1). The exact chilling requirement for ‘Muffin Man’ has not been calculated, but it is between ‘Brightwell’ and ‘Alapaha’, which was estimated to be 400 and 500 h, respectively (NeSmith et al., 2002). The number of days to reach 50% ripening for ‘Muffin Man’ was about 10 d less than ‘Brightwell’. ‘Muffin Man’ is characterized by an extended fruit ripening period, making it desirable for home gardeners. ‘Muffin Man’ produces berries with various colors ranging from yellow–green 147 D, to red–purple 59 A, to grayed–purple 183 A, to black 202 A, making it a very attractive plant. The long flowering cluster with an upright growth habit is unique among blueberry cultivars and shoots with either blooms or fruit can be used in floral arrangements (Figs. 3 and 4). Analysis of variance revealed significant differences between tested cultivars in berry weight and size (P < 0.001). Although ‘Muffin Man’ produces smaller berries, laboratory measurement of berry attributes indicated that other qualities are similar to ‘Brightwell’ and ‘Alapaha’ (Table 1).

‘Muffin Man’ behaves as a self-incompatible plant, a characteristic of most rabbiteye blueberry. Therefore, it is recommended to be planted with other rabbiteye blueberry cultivars with similar bloom period to allow cross pollination and good fruit set. The ornamental rabbiteye cultivar Pink Lemonade is a suggested companion for cross pollination as well as other relatively early-blooming cultivars such as ‘Alapaha’, ‘Climax’, and ‘Premier’. ‘Muffin Man’ is broadly adapted to the southeastern United States, and it is estimated that it will perform well in USDA hardiness zones 8a thru 9a.

‘Muffin Man’ is a public-domain, edible ornamental rabbiteye blueberry cultivar. Limited supply of softwood cuttings is available to certified nurserymen. ‘Muffin Man’ is deposited at the USDA-ARS National Plant Germplasm Repository, Corvallis, OR, as PI 687223 for research and breeding purposes. 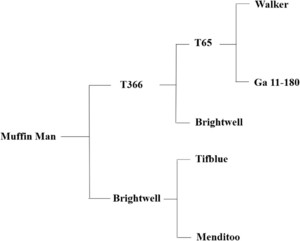 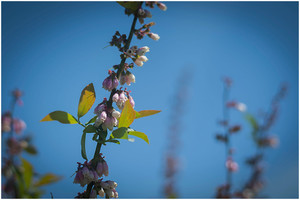 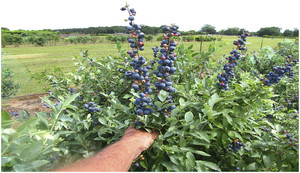