Diagram of the adapative lighting control system. A datalogger and control system uses a quantum sensor to measure the photosynthetic photon flux (PPF) underneath the LED light. Based on the measured PPF, the datalogger adjusts a 0 to 5 V-DC signal that is sent to a duty cycle (or pulse width modulation) control board. If the measured PPF is lower than the programmed PPF threshold, the duty cycle (fraction of time the LED light is energized during a very short on/off cycle) is increased and vice versa.

Representative data of the performance of the adaptive light-emitted diode (LED) light control system. The system controls the duty cycle of the LED light in such a way that the LED grow light provides just enough light so that the combined photosynthetic photon flux (PPF) from the sun and LED light reaches the PPF threshold. Data shown are for the highest and lowest PPF threshold on days with relatively low and high daily light integrals (DLI, in mol·m−2·d−1). Note that the LED light bar could only provide a PPF of ≈225 μmol·m−2·s−1. Therefore, the 250 μmol·m−2·s−1 PPF threshold was not reached when the PPF from sunlight was below 25 μmol·m−2·s−1.

The relationship between the duty cycle of the light-emitted diode (LED) light and the photosynthetic photon flux (PPF) provided by sunlight (left). The duty cycle was adjusted every second so that the LED light bar provided just enough supplemental light to assure that the total amount of PPF underneath the light bar reached the threshold level. Each data point is the average of 300 measurements collected over 5-min intervals. Using data points with duty cycles from 0.05 to 0.95: Duty cycle = 0.0250 − (0.00457 × PPFsun) + (0.00407 × PPFthreshold), R2 = 0.99.

The average duty cycle of light-emitted diode (LED) lights over a 14-h photoperiod as a function of the daily light integral from sunlight (DLIsun) on that day. Two different approaches to lighting control were tested. Pulse width modulation (PWM) control (top) refers to adjustments made in the duty cycle of the LEDs to provide just enough light to reach the threshold photosynthetic photon flux (PPF). With PPF control, the LEDs are turned on at full power every time the PPF from sunlight drops below the threshold PPF. Regression lines were derived from the following equations: for PWM control, Duty cycle = −0.0604 + 0.00378 × threshold PPF − 0.000184 × DLIsun × threshold PPF, R2 = 0.99; for PPF control: Duty cycle = 0.512 + 0.00553 × threshold PPF − 0.0000120 × threshold PPF2 − 0.0529 × DLIsun (R2 = 0.98).

The daily light integral measured underneath light-emitted diode (LED) light bars that were controlled in one of three ways: 1) 14-hr of supplemental light with the LEDs on at full power (DLI14hr), 2) LEDs were turned on at full power whenever the photosynthetic photon flux (PPF) from sunlight dropped below the threshold PPF (DLIPPF), and 3) pulse-width modulation control in which the duty cycle of the LED bar was adjusted every second to provide just enough supplemental light to reach the threshold PPF (DLIPWM). Numbers in the lower right corner of the graphs indicate the threshold PPF (in μmol·m−2·s−1). Lines shown were calculated using the multiple regression equation (upper right). 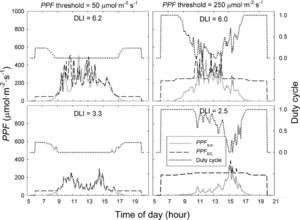 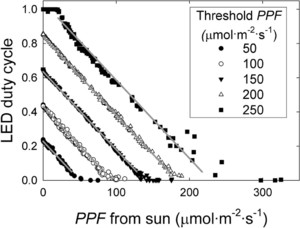 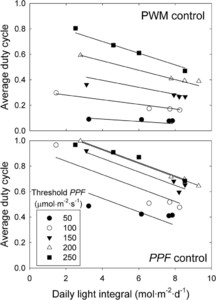 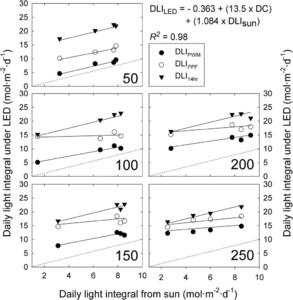