Mechanical Hedge Pruning of Pecan in a Relatively Low-light Environment

Schematic (not to scale) of mechanical hedging-type pruning cuts to ‘Desirable’ canopies. Hedging cuts were made 2.43 m (8 feet) from the trunk beginning in 2003 and ending in 2006, thus spanning four production seasons. Treatments are: 1) nonpruned control (NPC); 2) east and west faces of the canopy hedge-pruned annually during dormant season (January–February) (HD); 3) east and west faces of canopy pruned annually early summer (HS; late June); and 4) east and west faces of the canopy pruned during dormant (January–February) season, but with only one face pruned annually on a 2-year cycle [HD2; for the initial pruning cut, this treatment was pruned in the dormant (January–February) season and again in late June; however, subsequent cuts were made in early summer (late June)]. “C” = cut during the dormant season; “CS” = cut during late June. 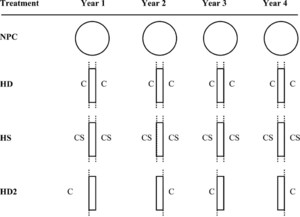